I nearly gave my husband a heart attack last week…

Normally if people blurt out “Stop the car!” it’s for some dire emergency that you know…is a real emergency.

My emergencies usually involve some random piece of junk that needs to be rescued. Sometimes you just can’t help seeing the potential of a future DIY project sitting on the side of the road.

It has been yard sale city around here lately, and even though I like to swoop in to grab up the sad castoff furniture, this one random bassinet cradle stand caught my eye, and my wheels were turning at lightning speed.

I hadn’t planned on hitting up the yard sales the day I nearly gave Robert a heart attack, but sometimes these things just jump out at you and beg you to take them home. 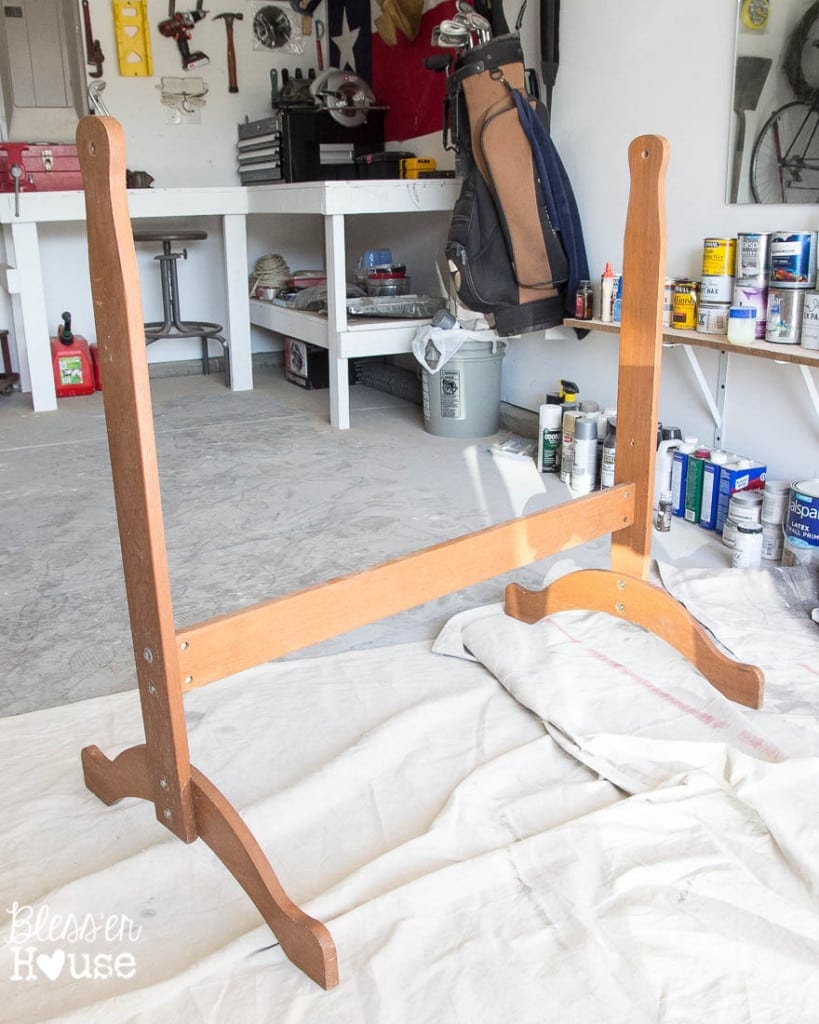 And for $3, how could I leave this little guy to fend for itself? It needed me. 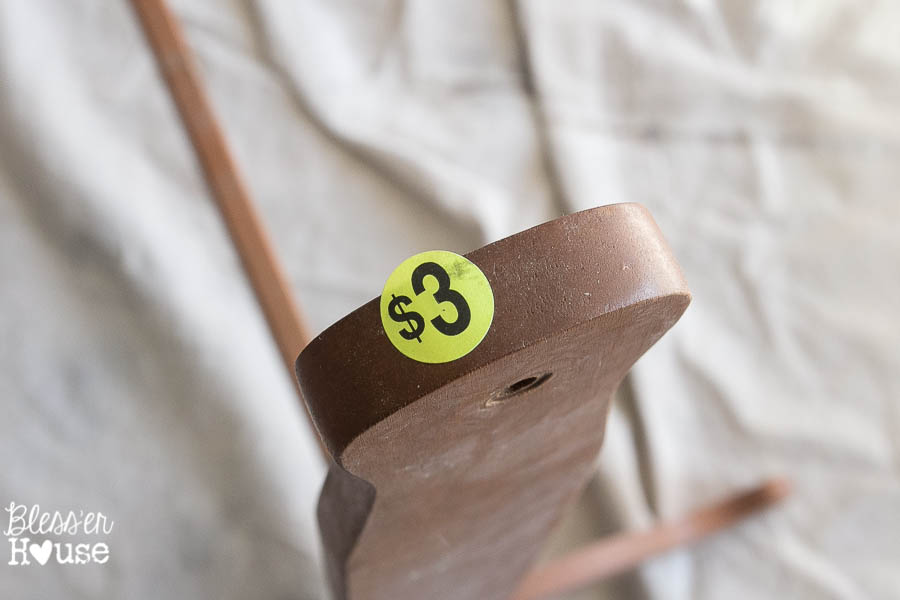 As fate would have it, I’d had a plan since the beginning stages of Olivia’s bedroom makeover plans to build a dress up rack. I figured it was going to cost around $40 and take a few hours. But this lucky find was dirt cheap and took a total of 15 minutes max. Can’t beat that!

Here’s what I used for the DIY Dress Up Rack: (Affiliates used below and noted with asteriks.)

I primed the stand first and gave it a few light coats of the Krylon Dover White spray paint. 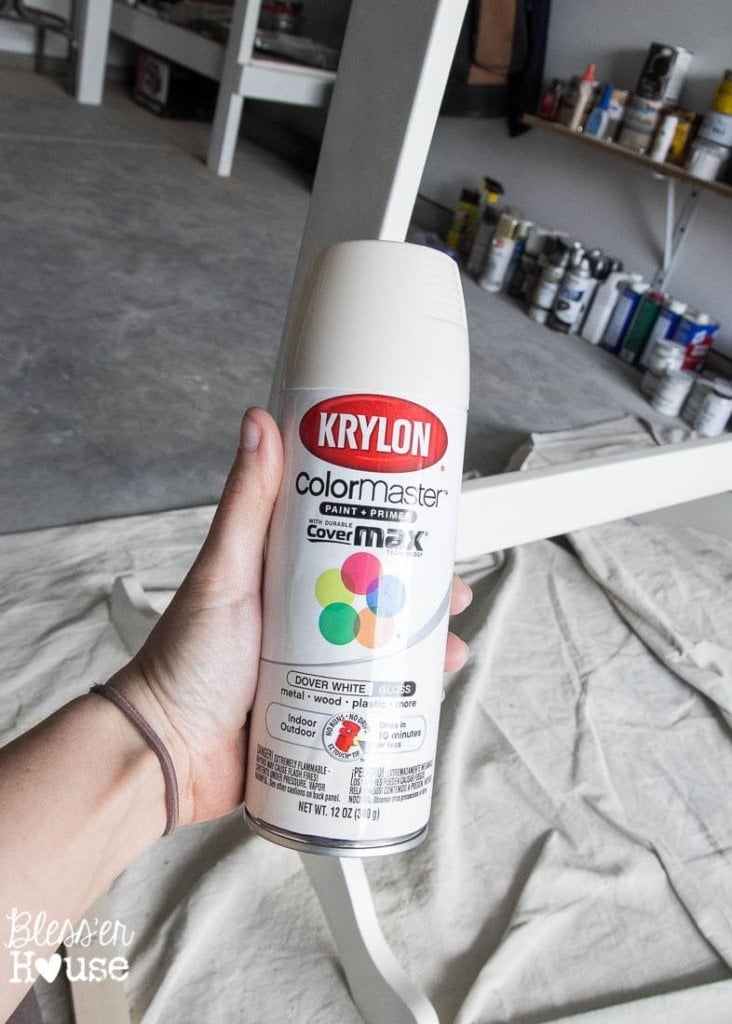 To attach my dowel rod to the stand, I used wooden rod sockets as anchors. 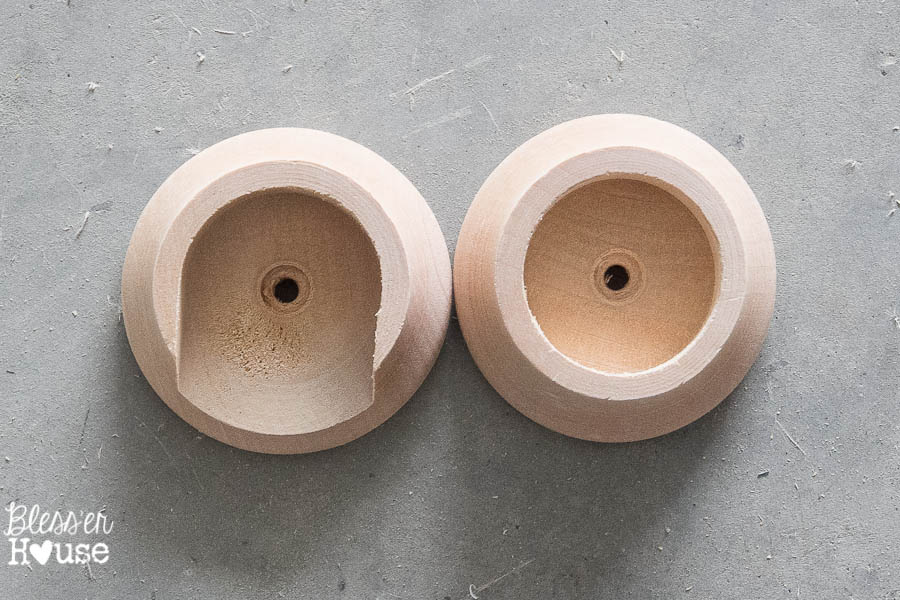 I cut my dowel rod down to the width of the bassinet stand and fastened the rod sockets on each end to put in place. 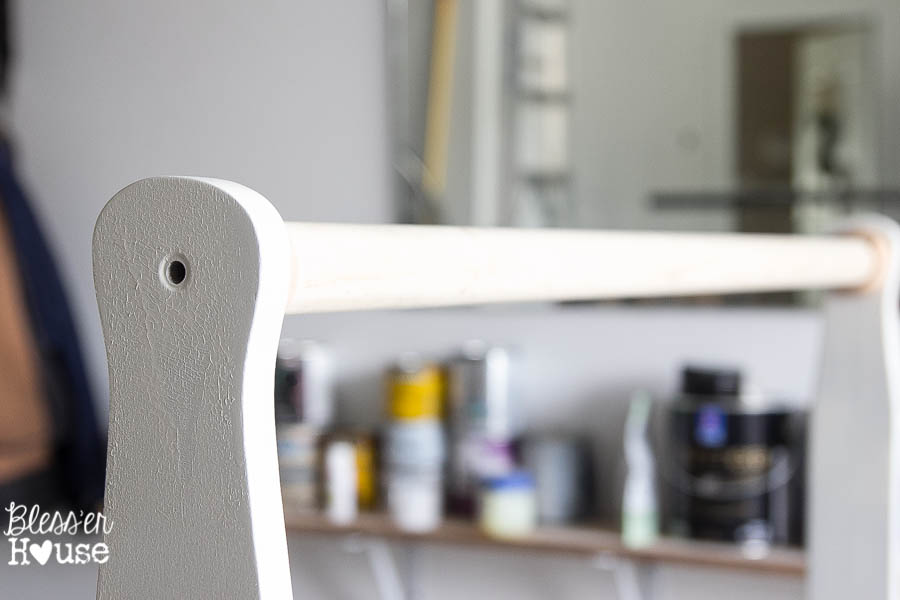 I later decided to paint the rod sockets to match the bassinet stand using more primer and Dover White. 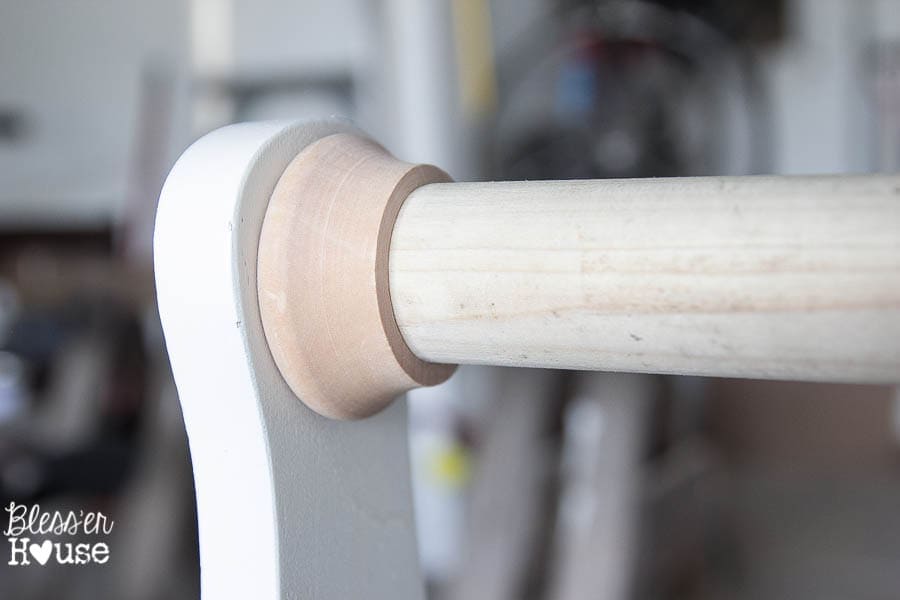 Robert used a wood screw on each end to attach the dowel and rod socket where the rack hooks used to be that held the bassinet. 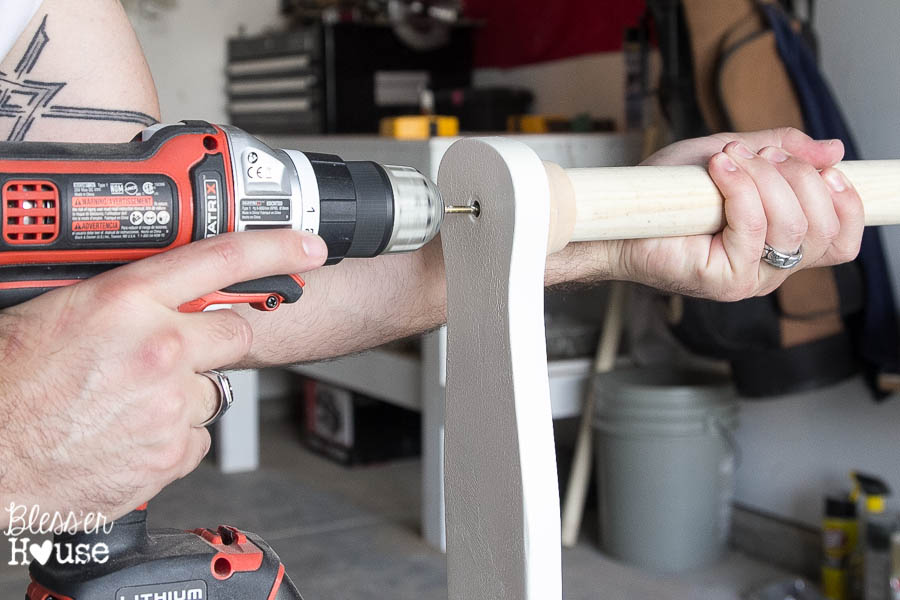 Boom. The easiest, cheapest dress up rack on the planet (as far as I know, anyway). I don’t think Olivia has enough pink costumes, do you? Sheesh! 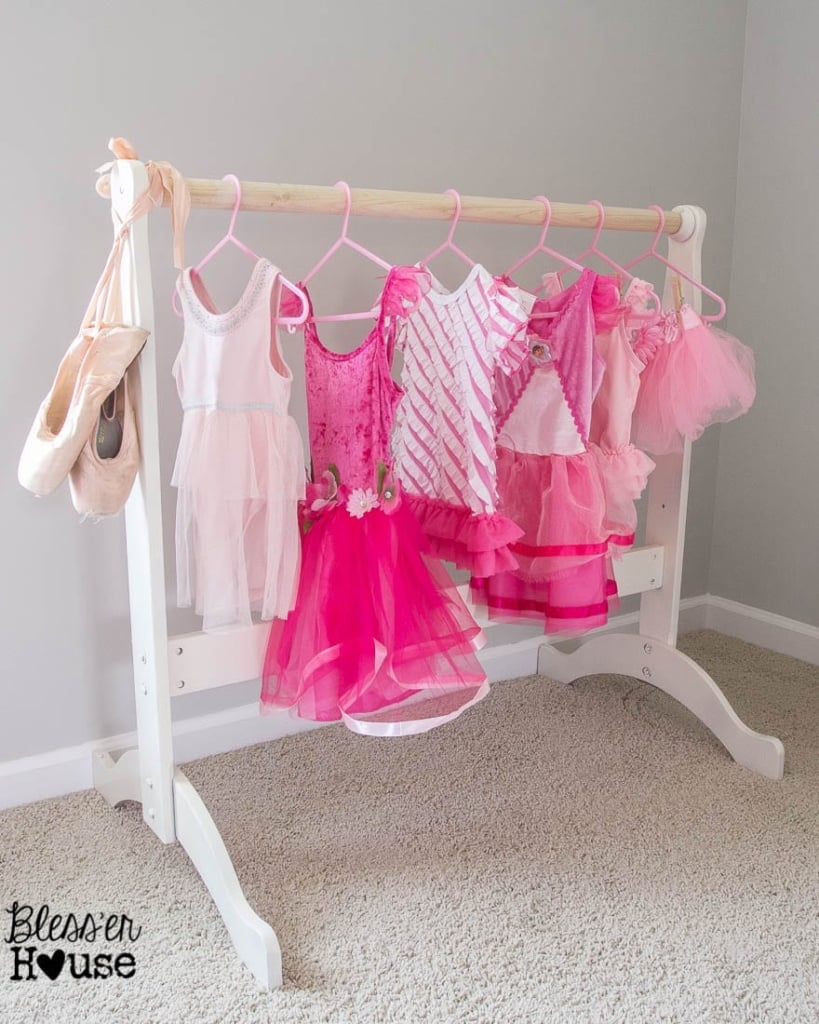 With the ballet barre, glammed up play vanity, and this dress up rack, it is a world of fun in this bedroom now. 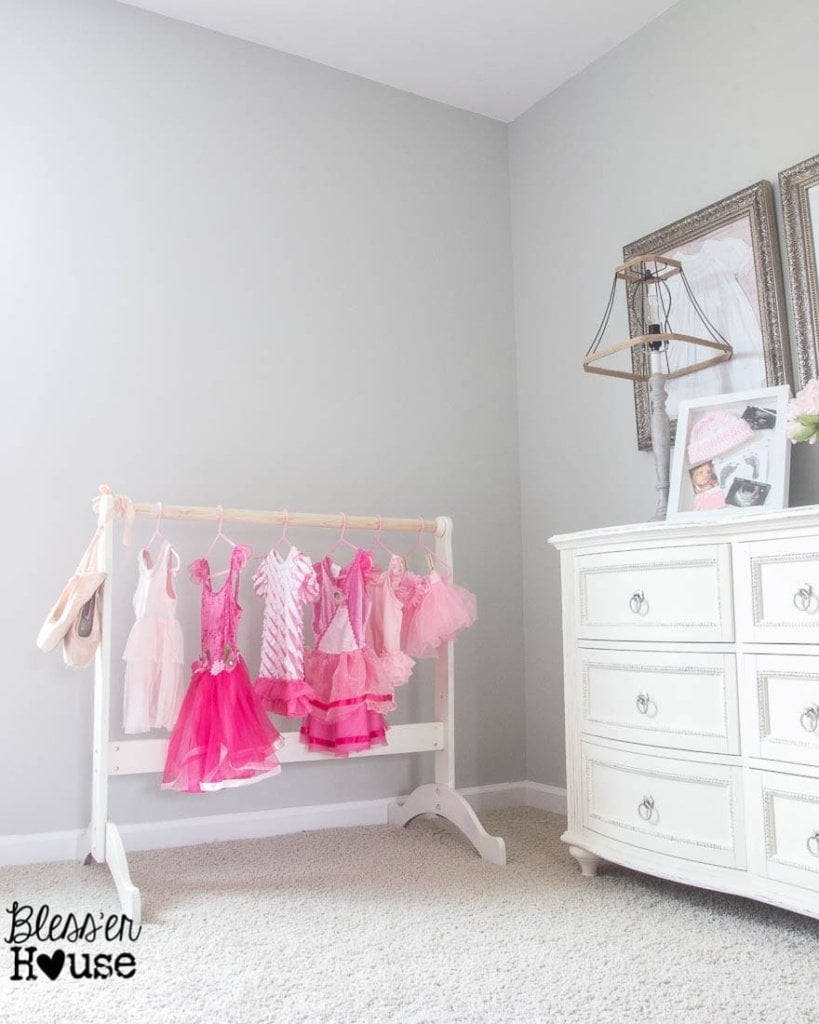 Soon, I hope to have a play rug in front of the dresser and dress up rack too. We’re getting so close. 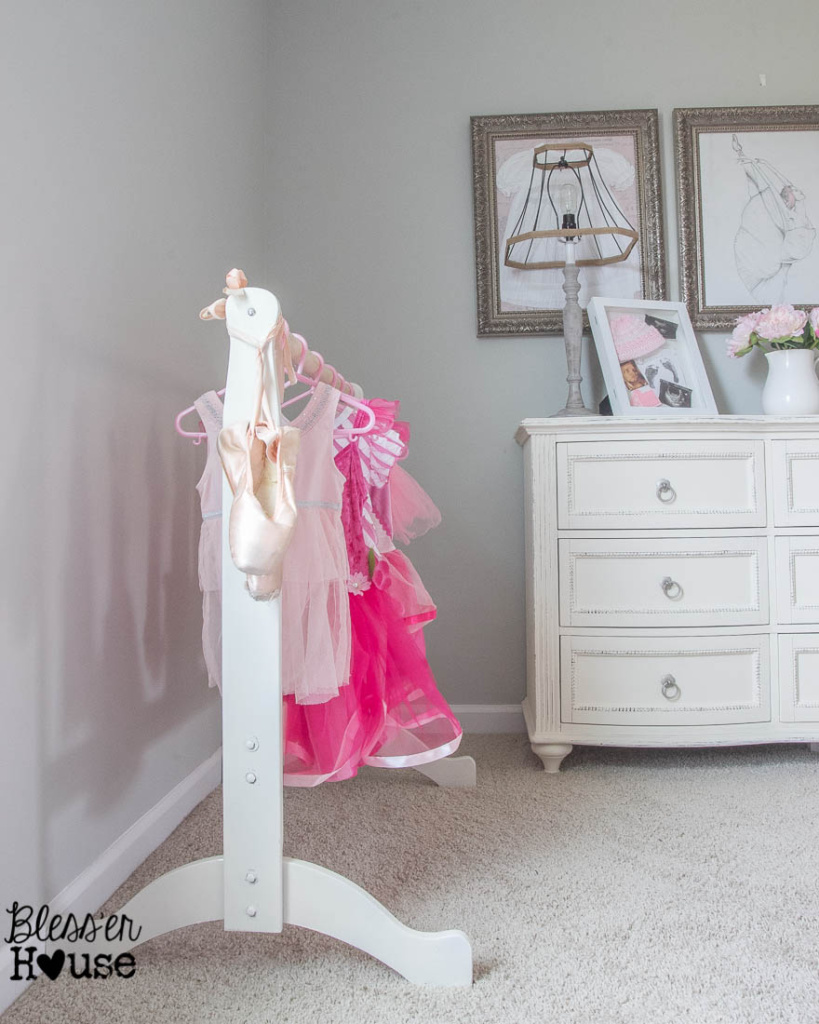 I’ll be putting a big shelf above the dress up rack too for some dress up hats and something decorative for her blank wall there. 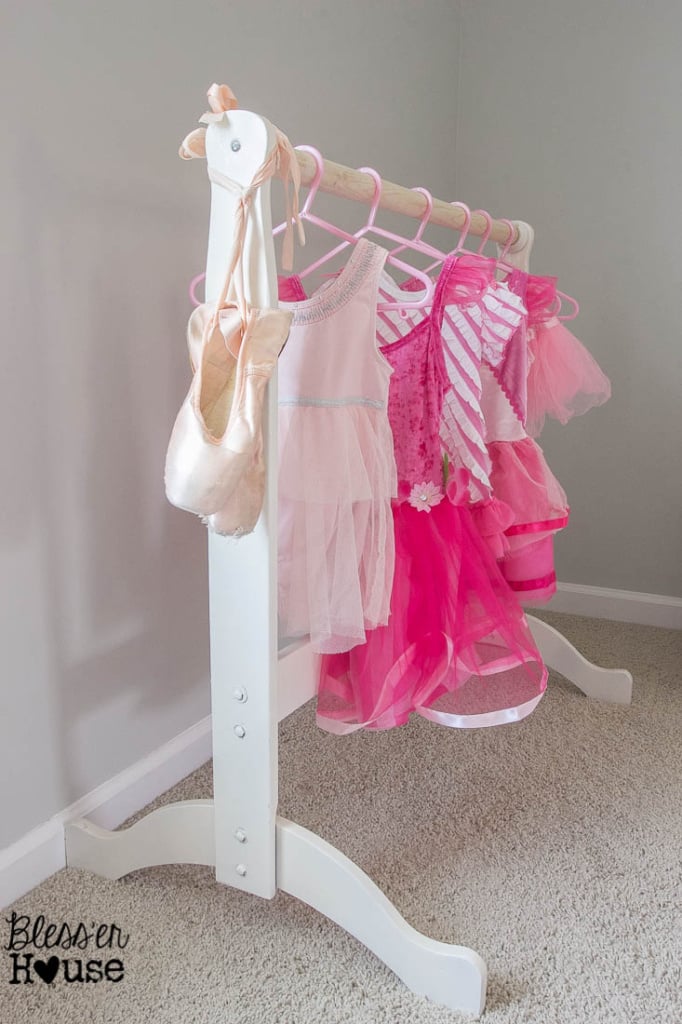 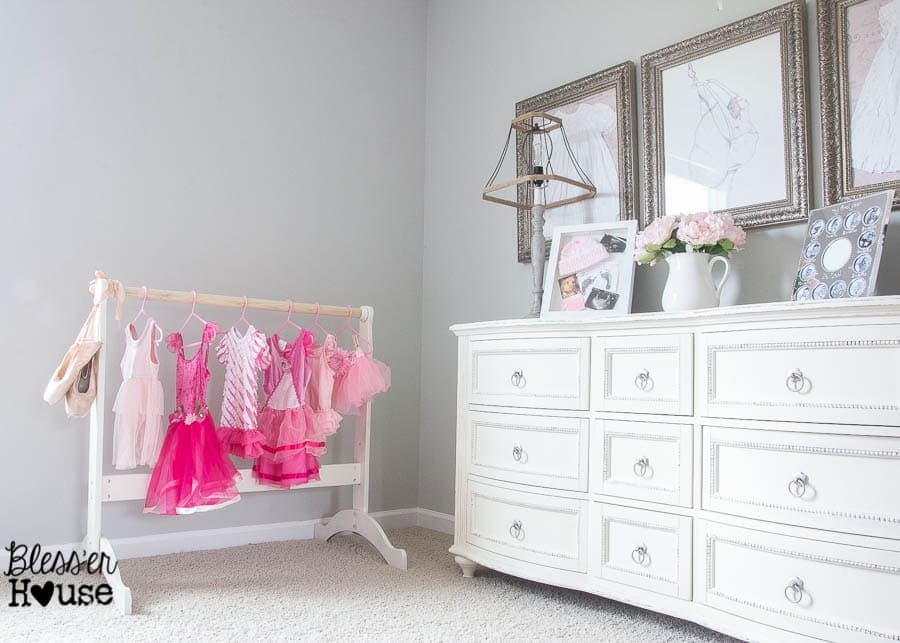 Our next steps are to add a canopy over her bed, frame out her window, and add curtains. Sometimes finding the time to do it all is the hardest part, especially since we usually work during naptime…but that’s hard to do when you want to work in the room where your kid naps. 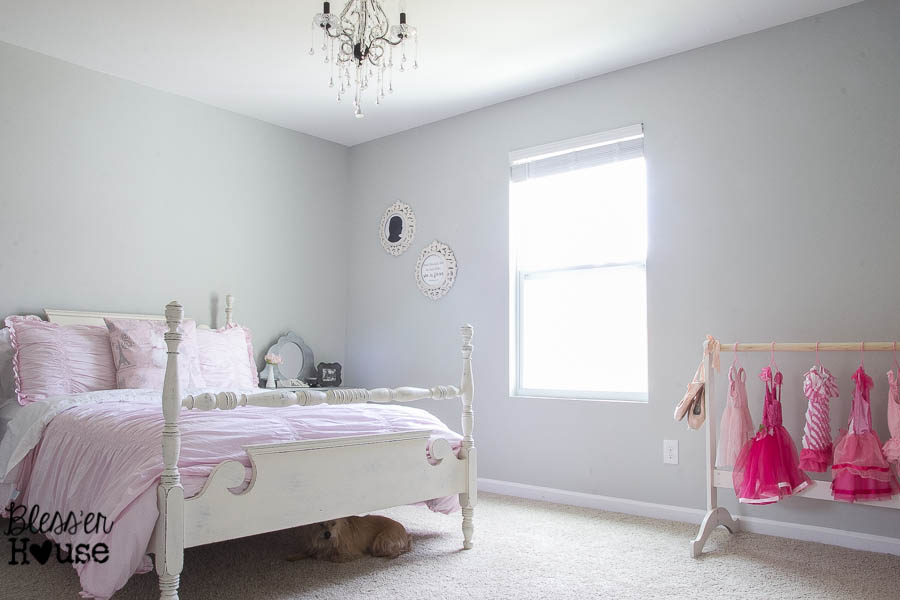 And um…do you see someone hiding under the bed there? Lola always has to be in on the action, ya know.

What do you think? Worth the mini heart attack? No husbands were harmed in the making of this project, I promise. 😉 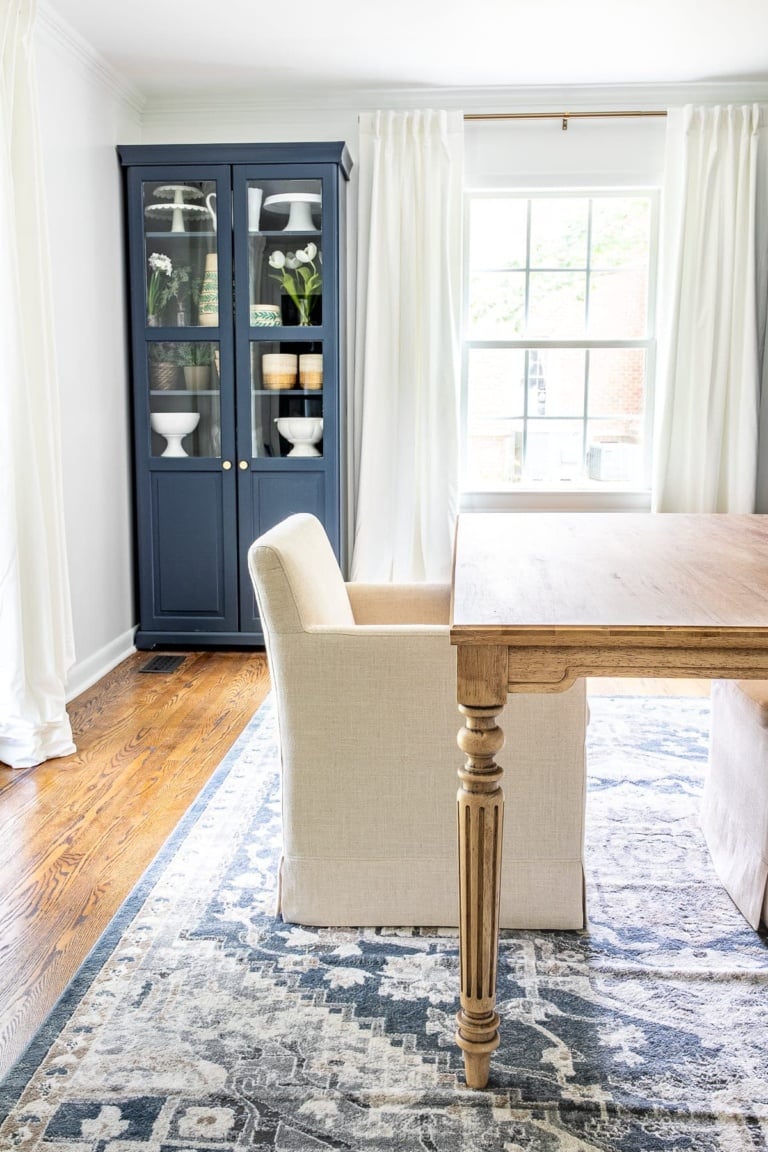 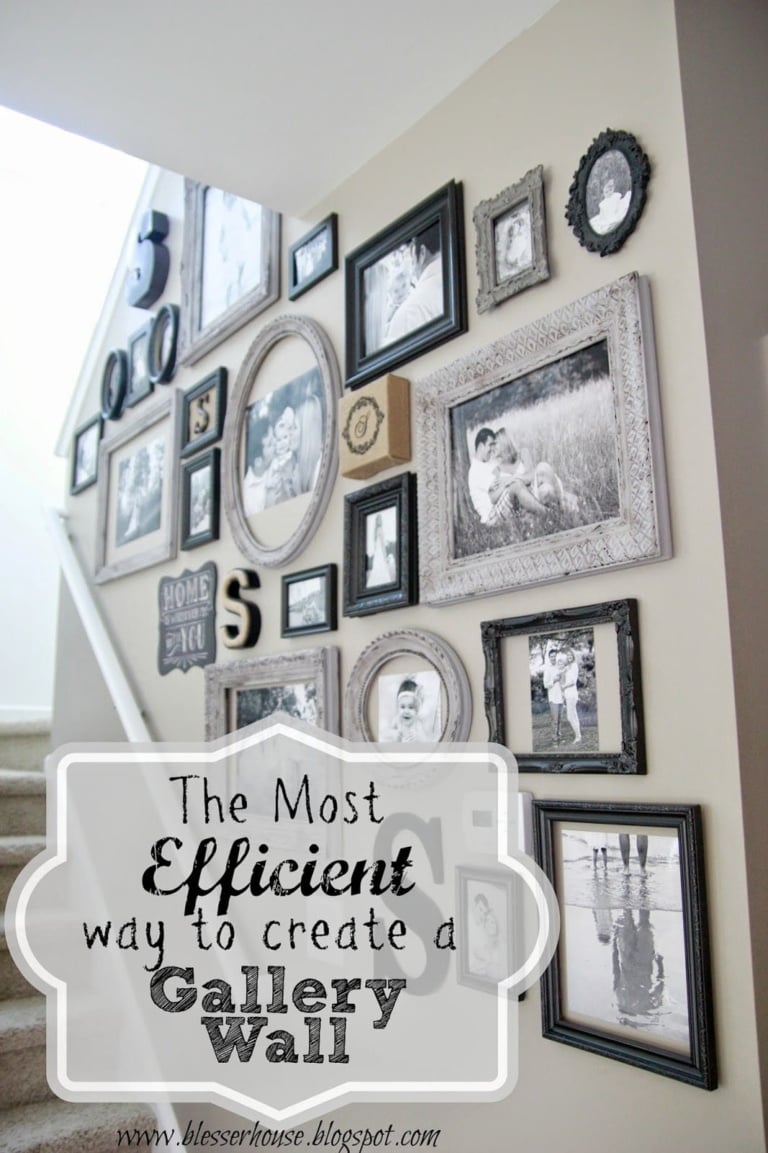 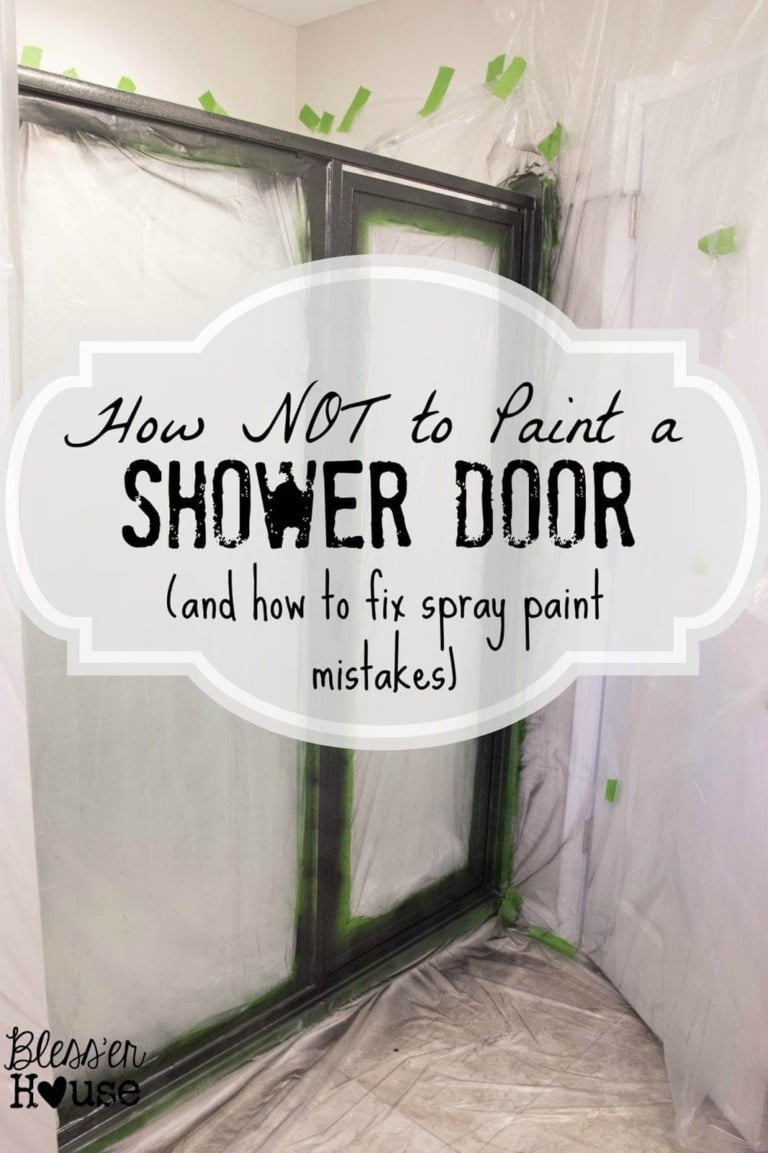 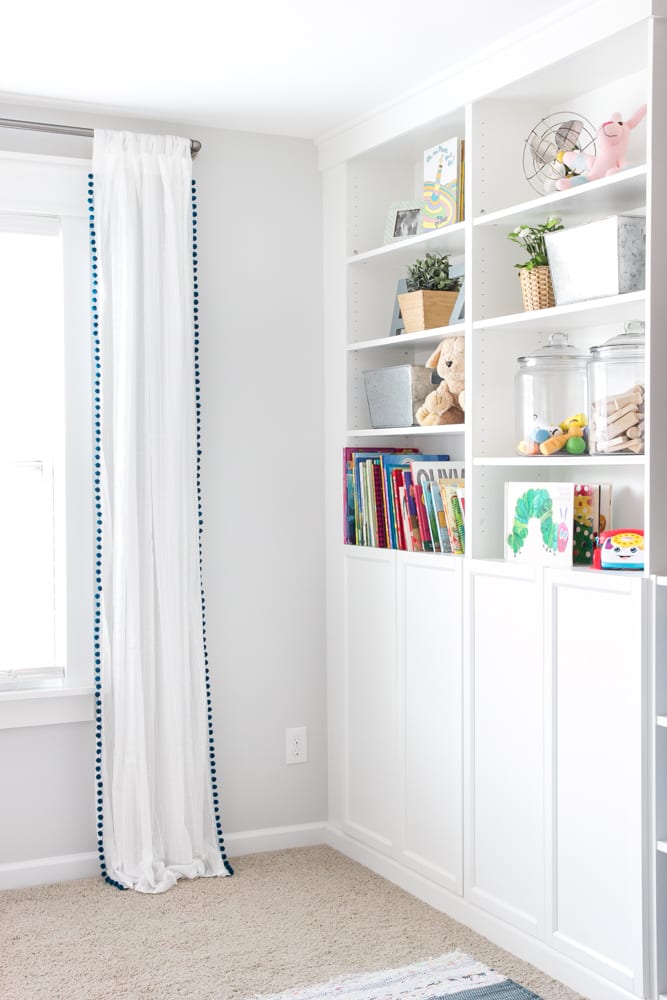 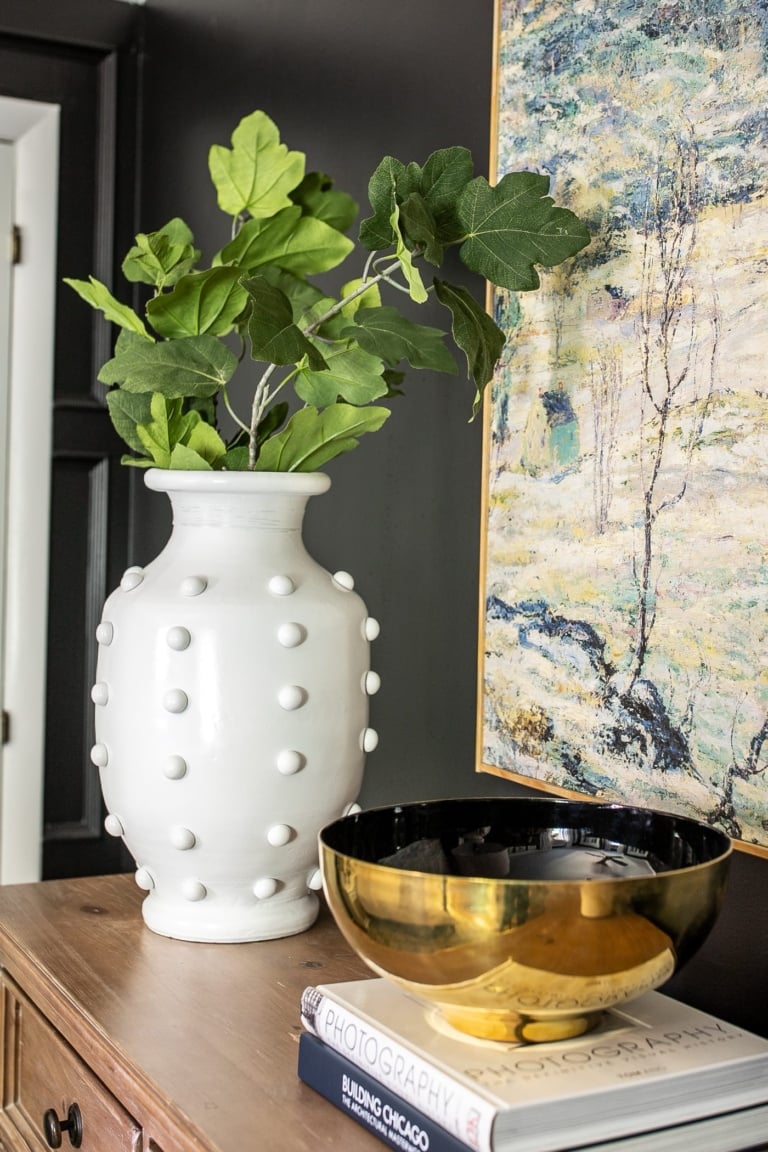 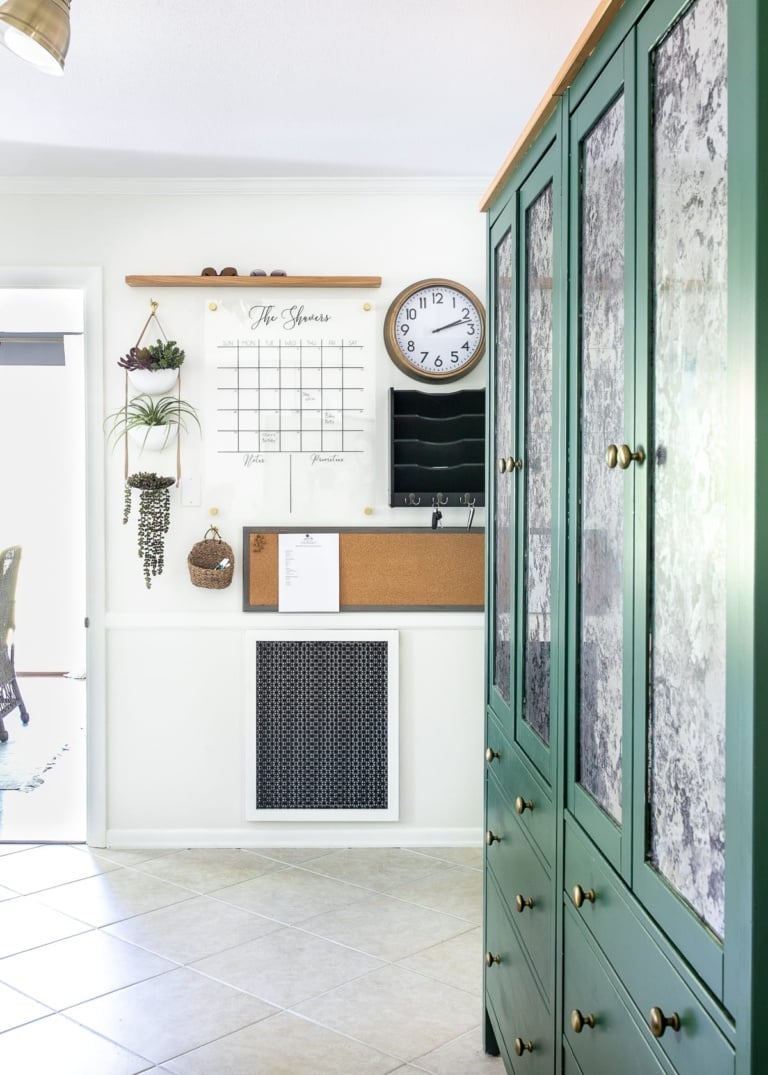