I promised y’all in the pregame of Miss Livie Bug’s bedroom makeover that it would be filled with Restoration Hardware inspired goodness.

Well, friends. Here we go. One of more to come. 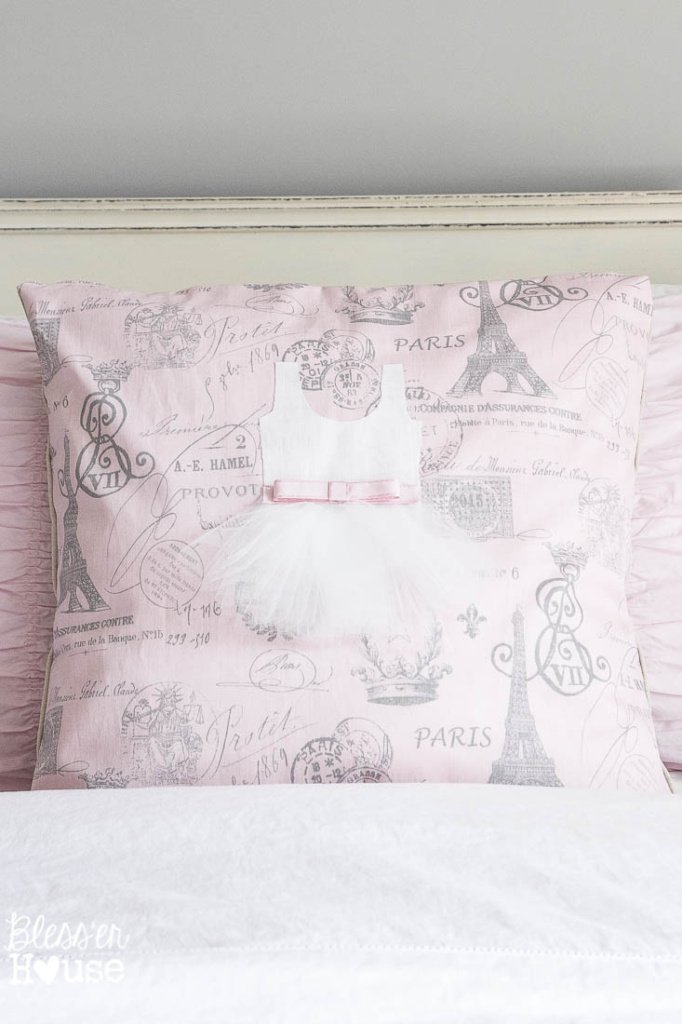 Not to toot my own horn, but this appliqued ballerina pillow is stinkin’ cute! Well, okay. I can’t take credit technically.

I had this idea of making a cute pillow for Olivia’s bed using some of the French script fabric I had leftover from her curtain canopy. And I had still plenty of tulle leftover from the tutus I made for her birthday party last year. (It’s a sin to throw away fabric scraps in our house.)

So when I stumbled upon the idea for this pillow from RH Baby and Child, it was exactly what I was envisioning already. Restoration Hardware, you so get me. 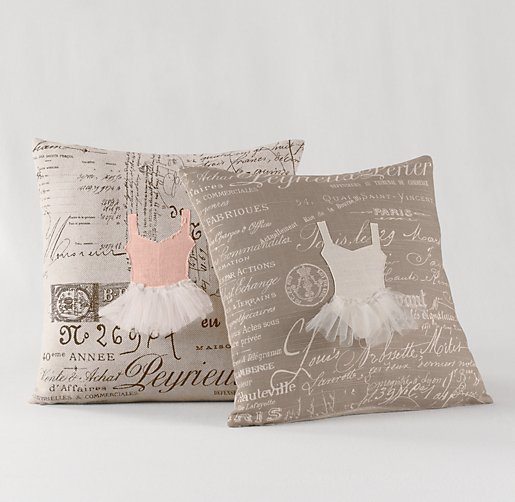 Even if I’d wanted to spend $75 on one of these little beauties (but goodness knows I don’t), I would have still been willing to use up a bunch of fabric scraps.

And the best part…it cost me nada. Zilch. Not a cent in the present day to make this…all because I’m a craft supply hoarder, but often it pays off.

If you’d like to make one too, here’s what I used:

Can you believe I had all of that just hanging out in my craft closet for the past few months? Told ya. Hoarder. 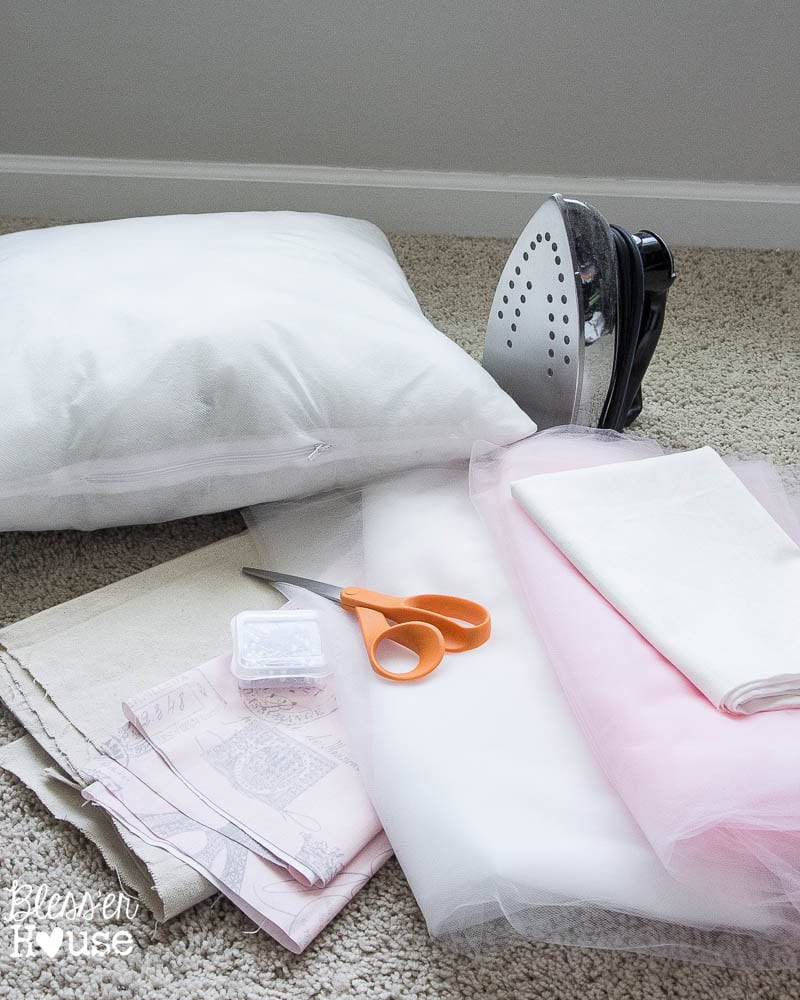 I got the idea to change the RH design a bit by making the pillow reversible, so I cut out a piece of canvas drop cloth fabric leftover from our dining room chairs makeover to be a little bigger than my pillow insert. 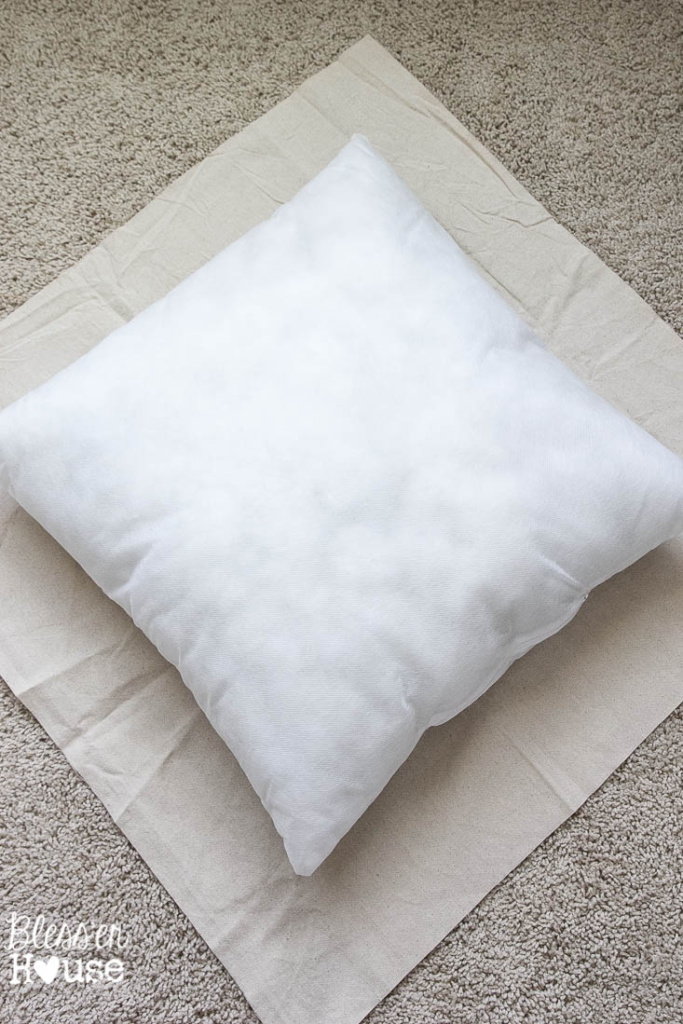 I did the same thing to my French Stamp fabric. I am the worst at sewing, and this is only my third or fourth fabric project ever, so if you’re a professional seamstress, you’re going to cringe throughout this post, I’m sure.

I realized later that I didn’t need fabric squares nearly this big, but I’d rather they be too big and cut them down to size than too small. Erring on the side of caution. 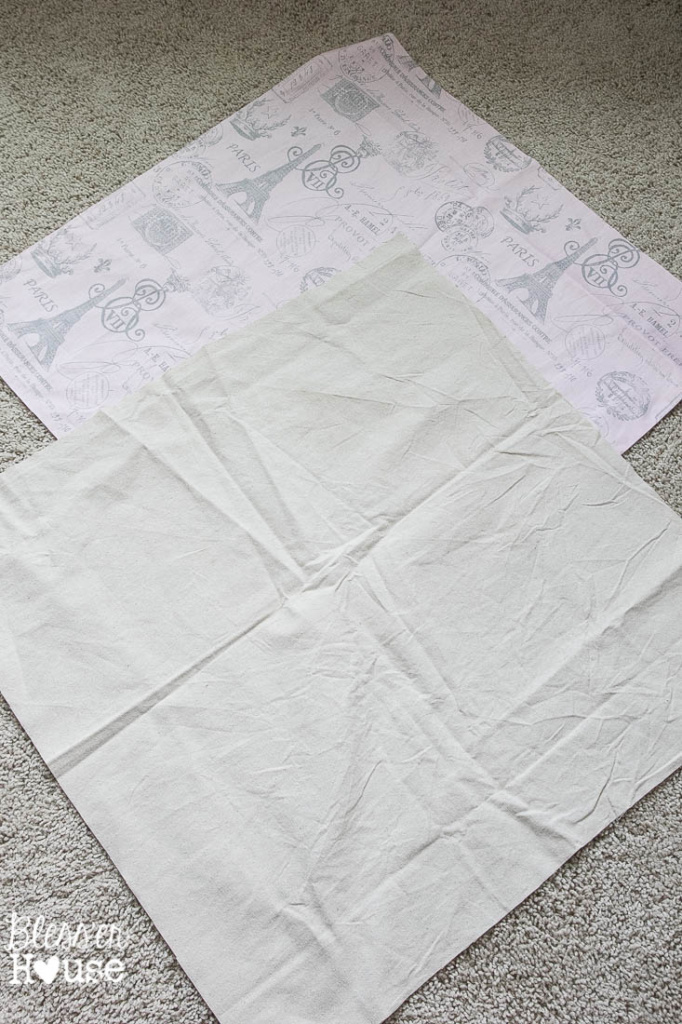 When my two squares were cut, I ironed them to make them easier to work with. I just laid a towel down and sprawled out in the floor.

Then I laid the two squares on the floor with the French Stamp print side of the fabric facing up and the drop cloth square lying on top so that I could make the seams with the cover being inside-out.

For sewing wimps like me, Heat n Bond is magical stuff. 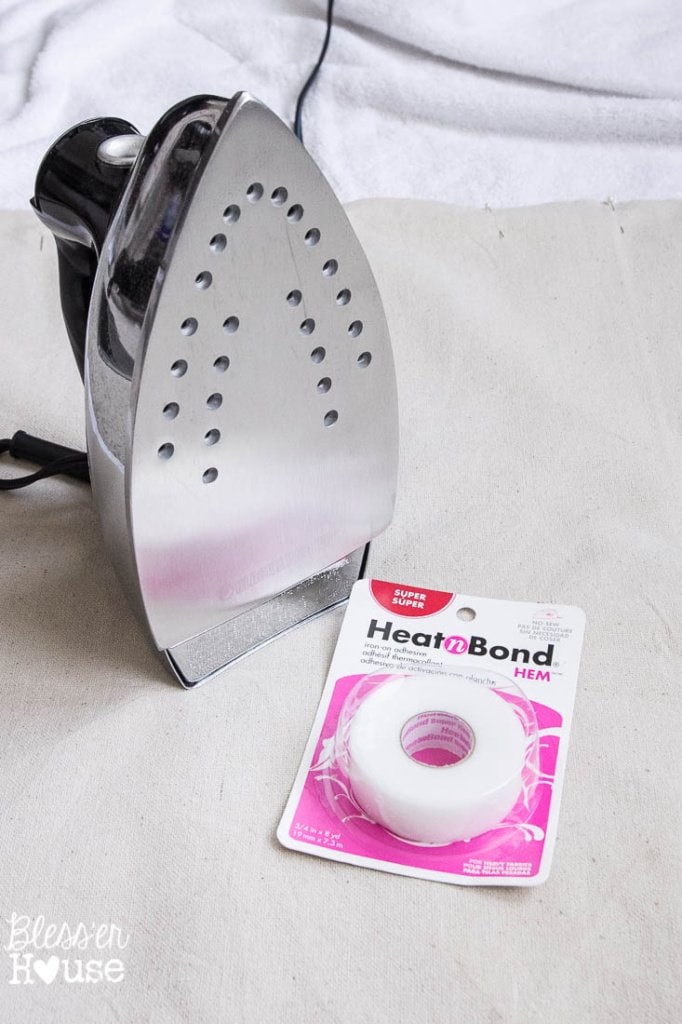 After I lined up my two fabric squares on top of each other, I cut a strip of Heat n Bond tape the length of one side of the squares and sandwiched it between the fabric layers. 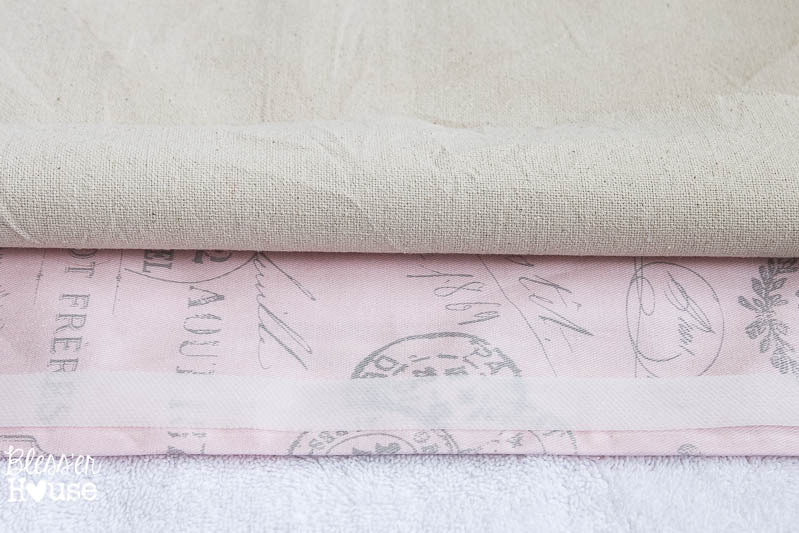 I pinned the tape down in place in the fabric and did the same on two more edges. I paid attention to the fabric print to make sure I left an opening on the side that would become the bottom of the pillow. 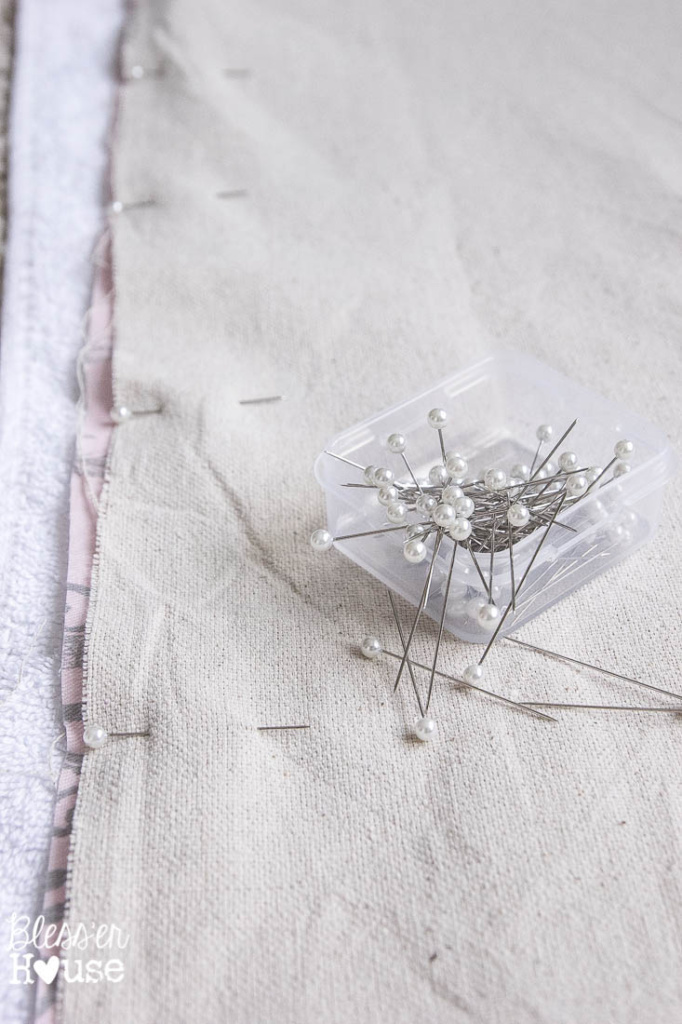 Once three edges had Heat n Bond placed and pinned, I ironed them on medium heat with no steam. I flipped the fabric over and ironed the edges of the other side too. 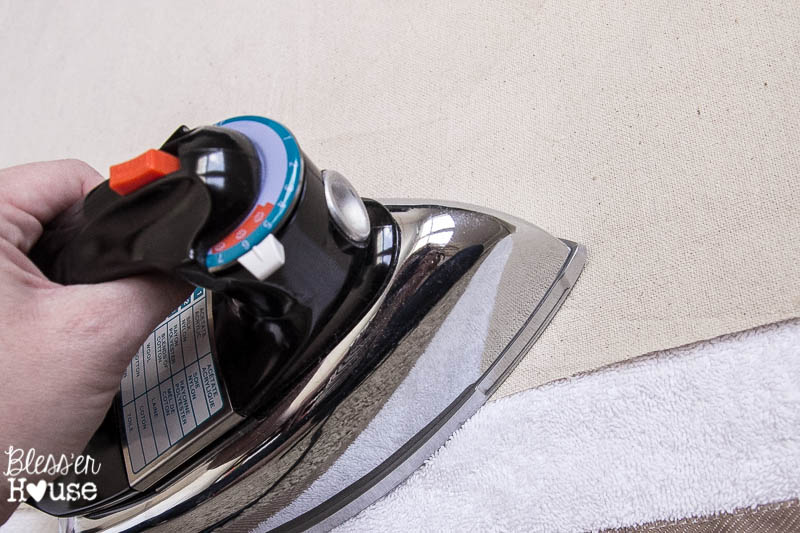 Then I turned my cover inside-out. I pulled it onto my pillow insert and ended up cutting the fabric down a little and reapplying Heat n Bond on two of the sides since it was a bit too big. I could have just measured to begin with instead of eyeballing it. Silly me.

Once I adjusted the size, I stuffed in my pillow insert, and closed up the bottom with another strip of Heat n Bond. You could wait until after you’ve added your applique if you want, but I managed just fine with my pillow already in. 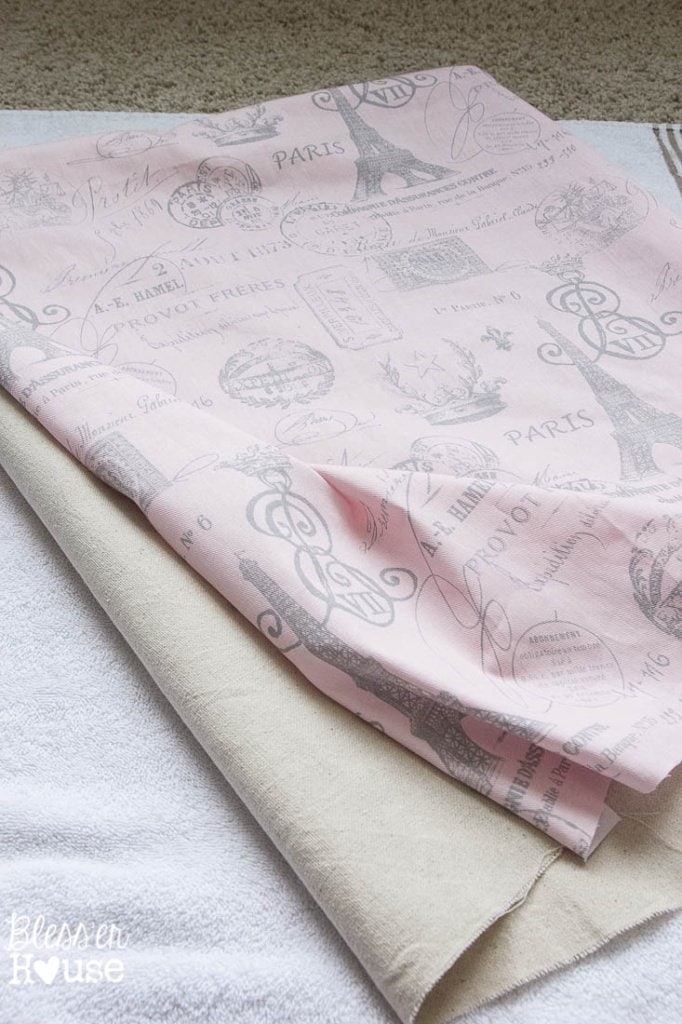 Then the fun part began! I’ve mentioned before that I can only draw stick people, so I took to Google to find a basic leotard clipart. I printed my clipart on a piece of cardstock. 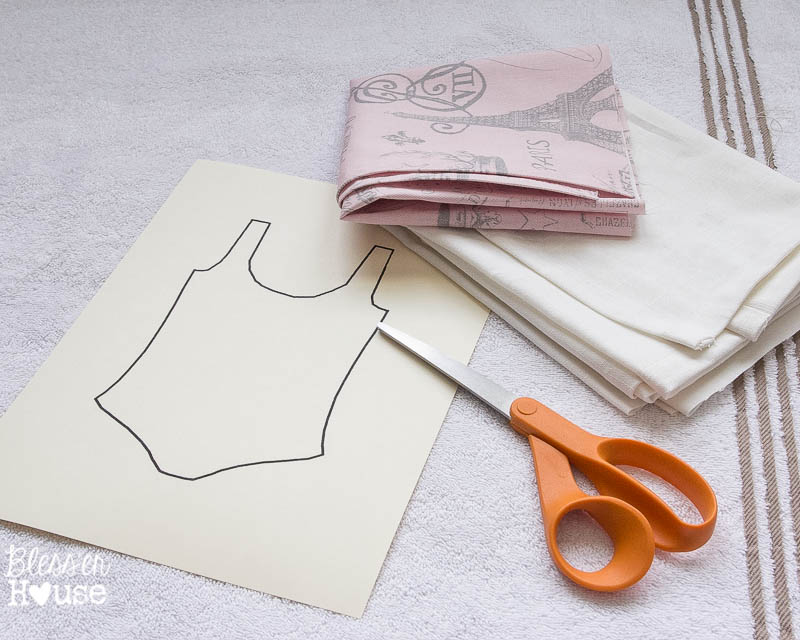 Then cut out the clipart and traced it on the backside of another piece of French Stamp fabric using a colored pencil. I used a scrap piece from hemming our breakfast area‘s Ikea curtains last week for a white leotard. Waste not, want not. 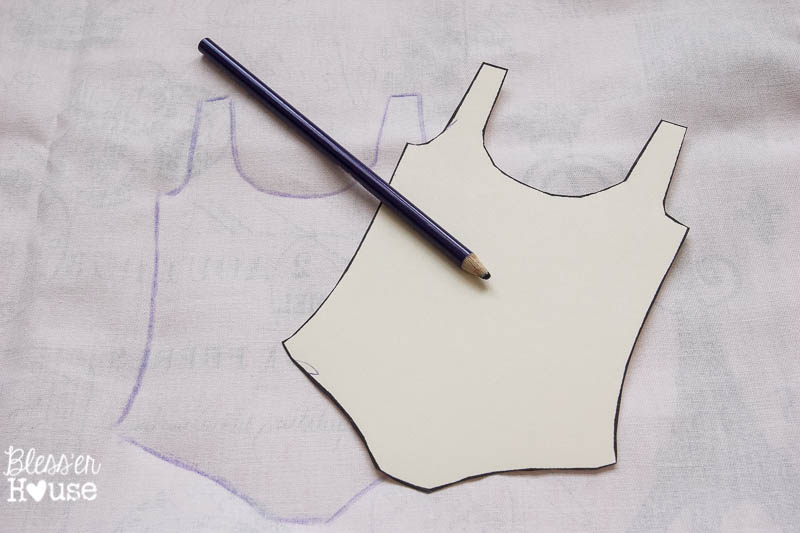 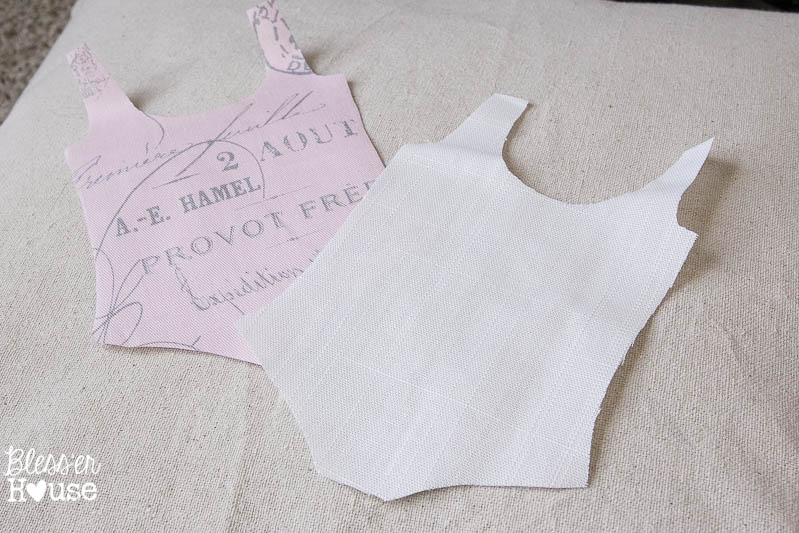 I had some leftover pink ribbon from Olivia’s birthday party too, so I made a couple of bows using hot glue for the top of what would become the miniature tutus. 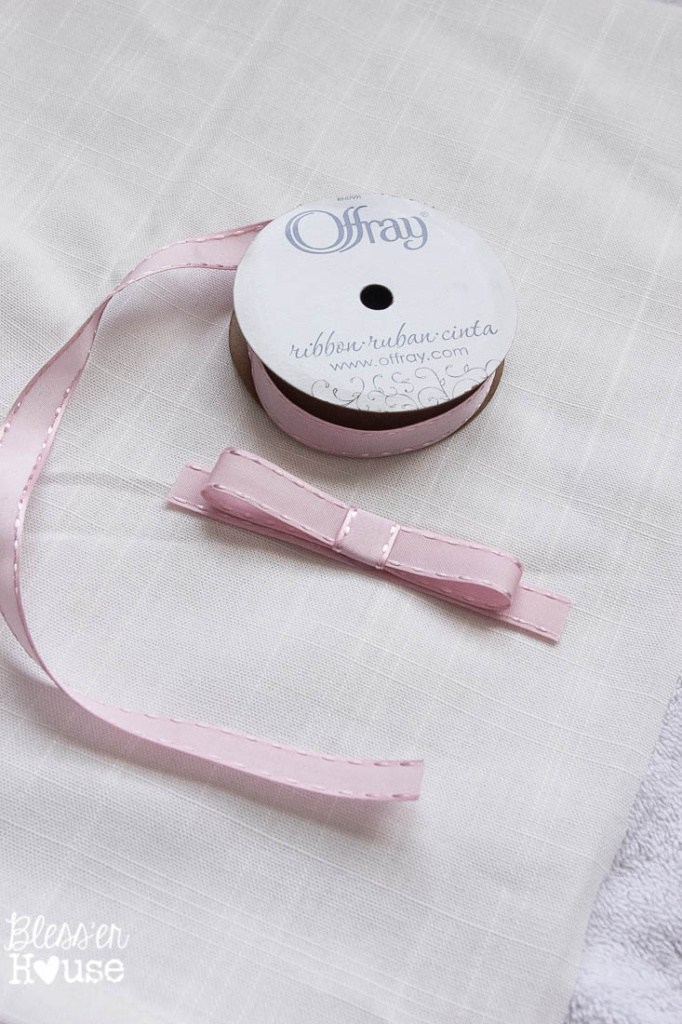 Using some tulle cut into strips, I folded it in an accordian/fan style. 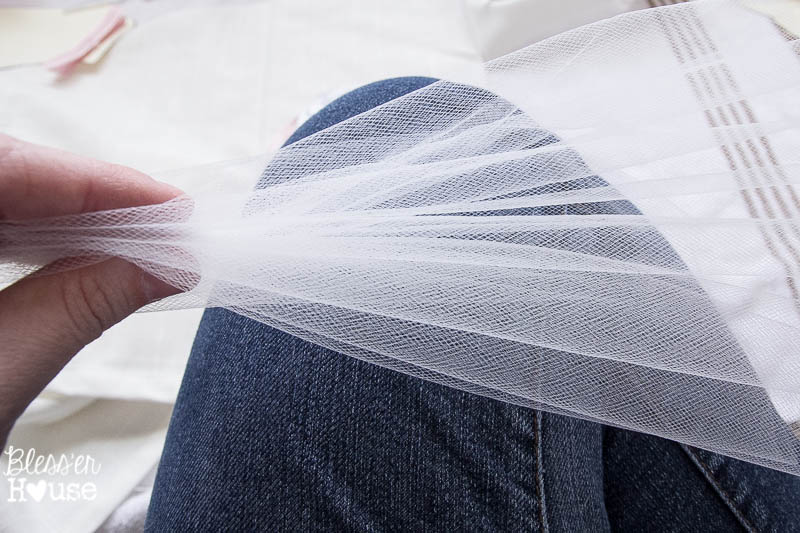 And hot glued it into sections on the back of the ribbon. I used my colored pencil to press down on the tulle in the hot glue to spare my fingers from getting burned. 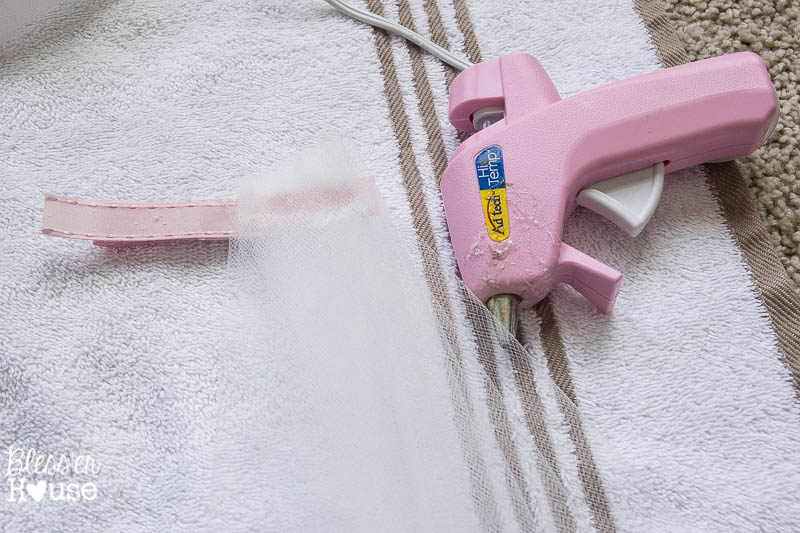 Once I was finished gluing the tulle, the top looked like this. 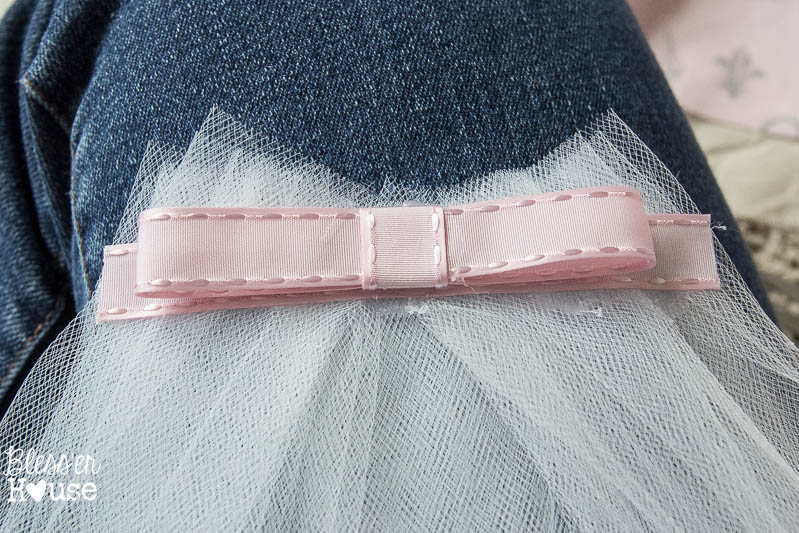 I cut off the extra at the top, and I trimmed the bottom of the tutu since mine was too long. 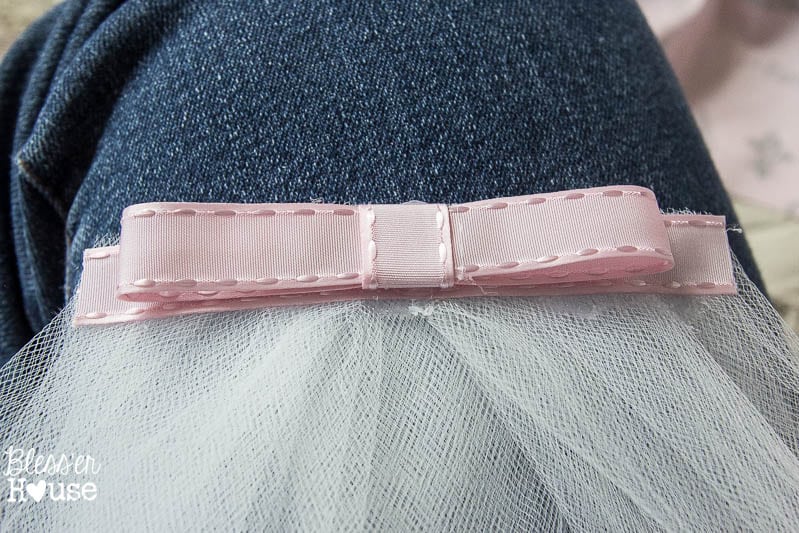 Since I only had Heat n Bond tape, and not a flat sheet of it, I just cut it into strips to attach the fabric leotard to the center of the pillow using the iron again. I added more around the edges so the fabric wouldn’t fray. 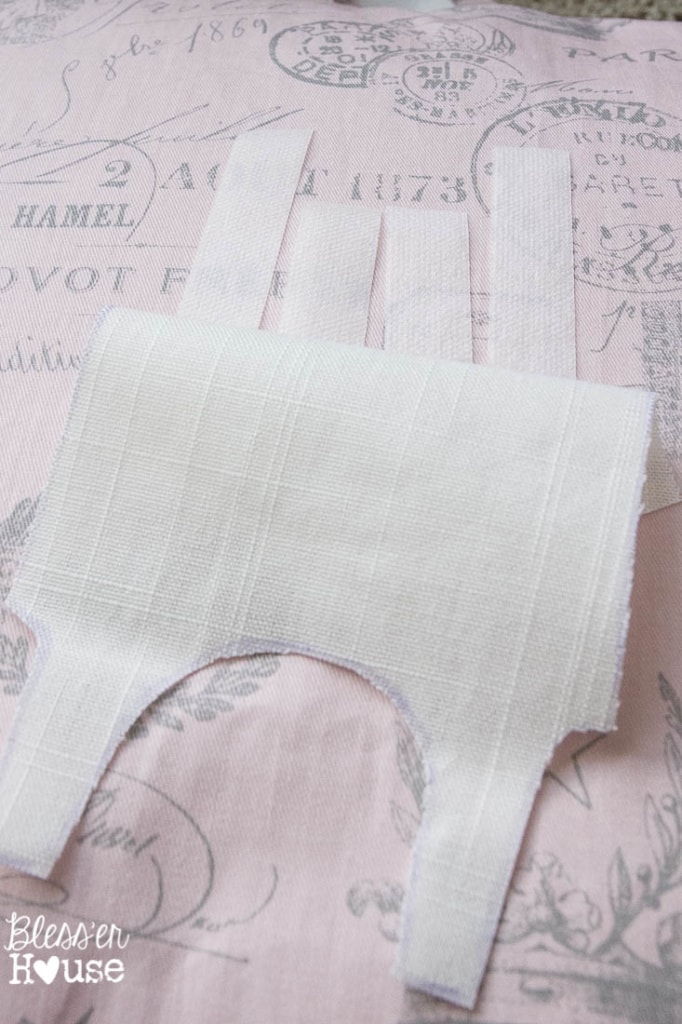 Then it got the finishing touch with a tutu hot glued onto the leotard. 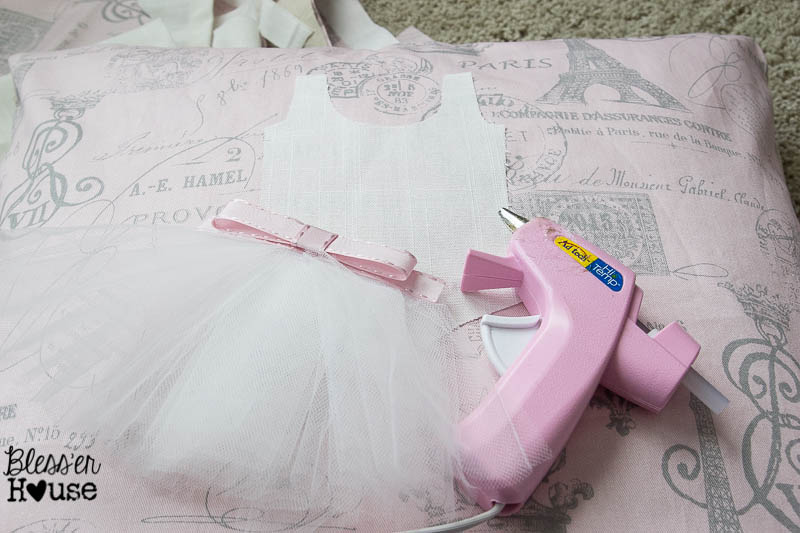 Woo to the hoo! Olivia enjoyed coloring little tutus I had printed for her from the leotard clipart while I finished it up…and then she colored on herself, naturally. 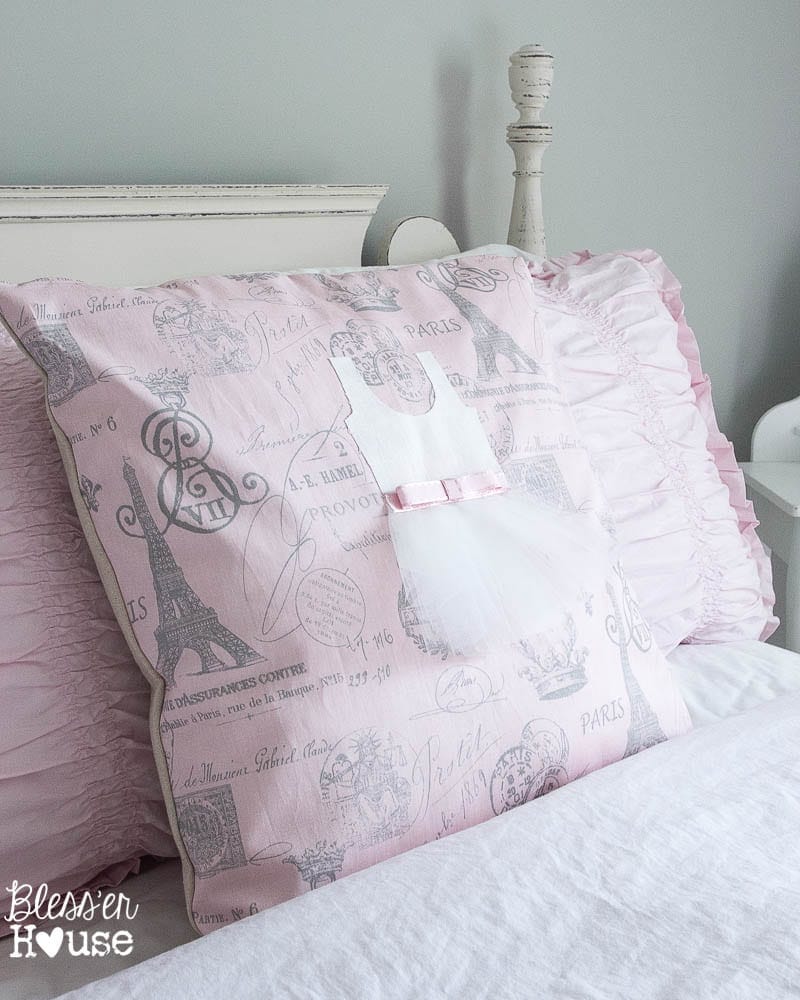 Isn’t it perfect with the rest of her bedding? 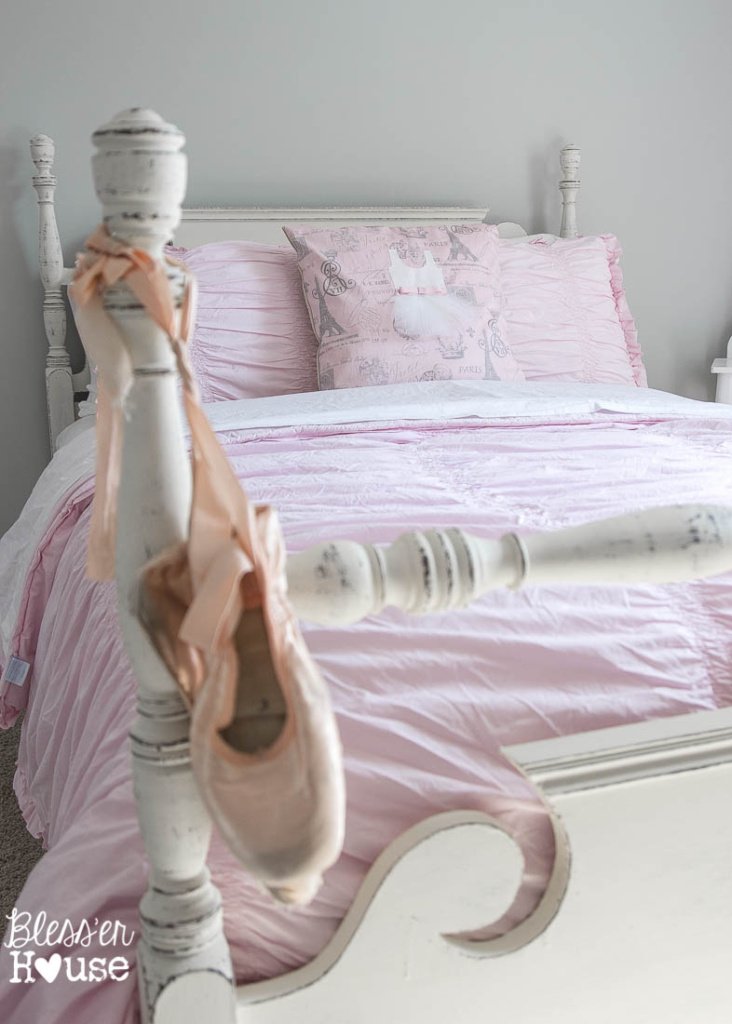 I’m so thrilled that I actually pulled this one off with no sewing whatsoever and used only scraps. 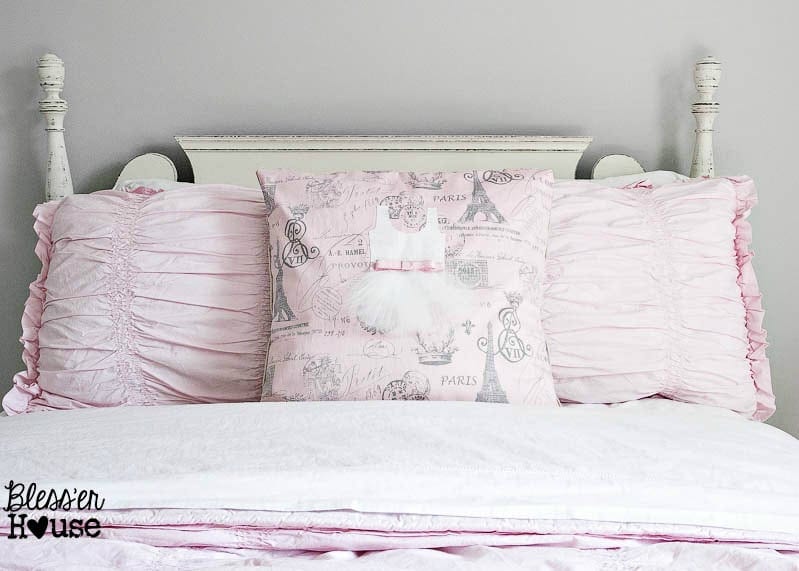 And it’s even more awesome that it’s reversible. 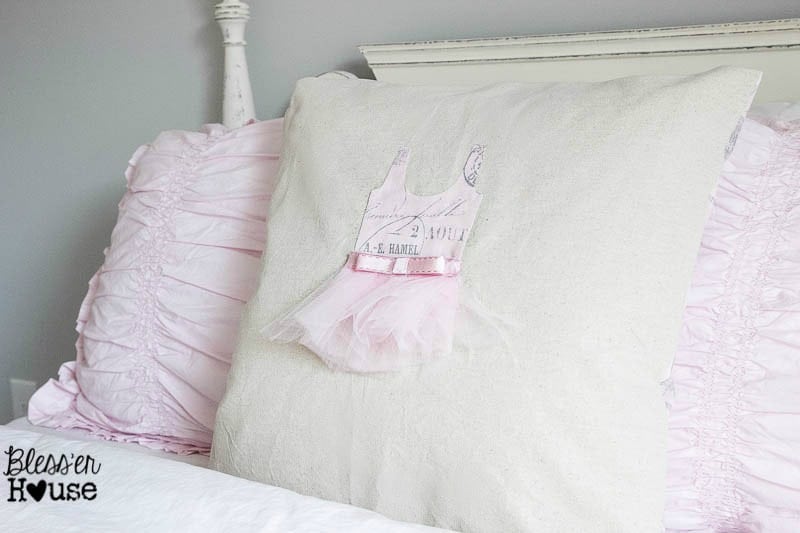 For now though, the French Stamp is my favorite side. 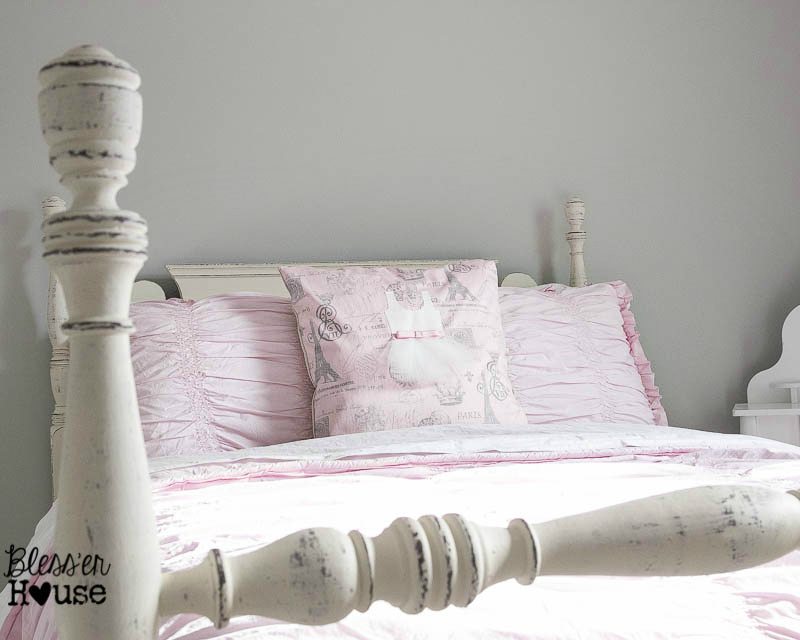 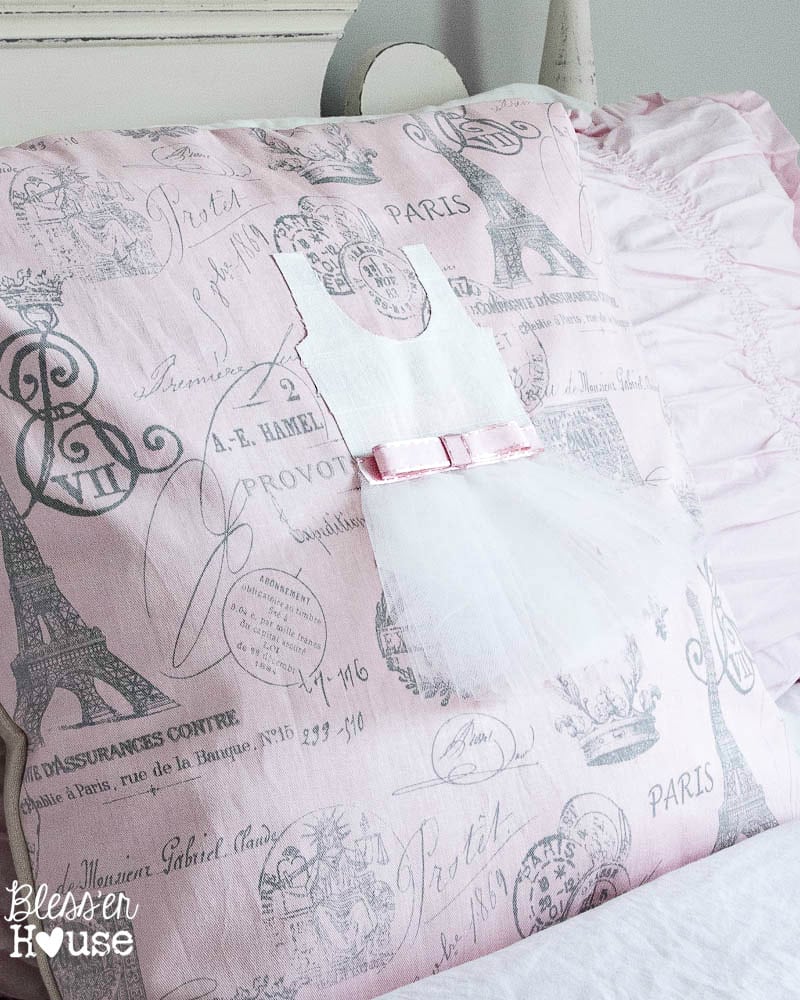 Now that I’ve tried this one out, I’m excited to try out more DIY applique pillows, with something other than tutus of course. You think Robert would be cool with a tutu pillow in his man chair? 😉 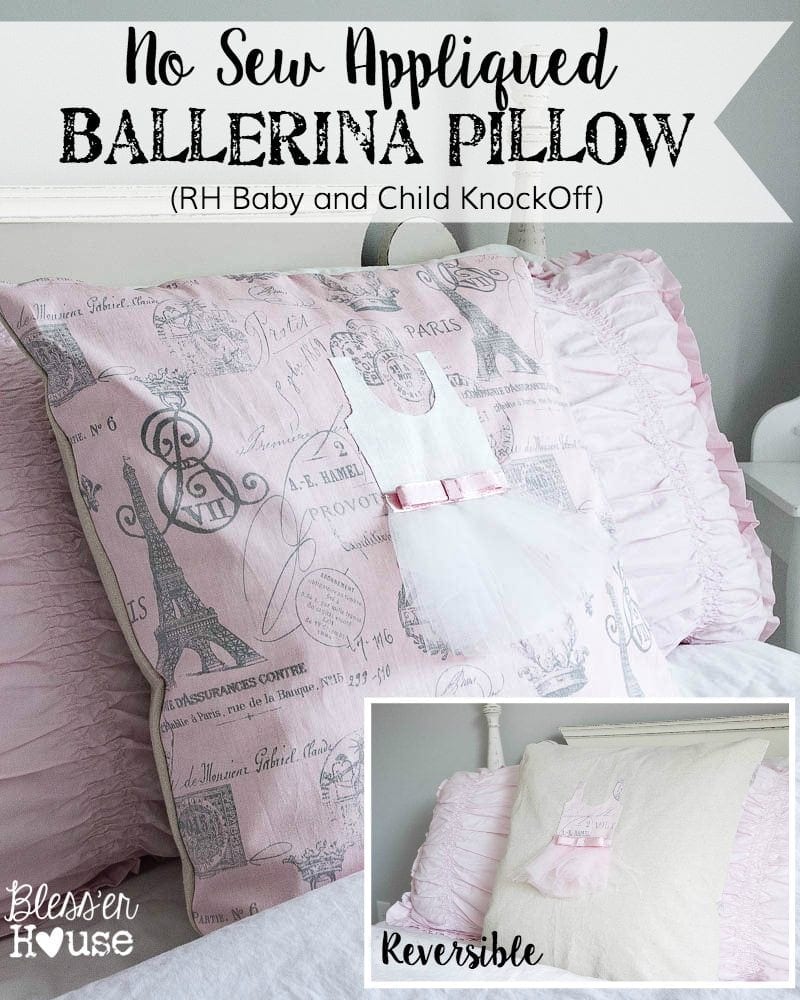 I can’t wait to have more of these bedroom projects coming y’all’s way soon. I’m soaking up every minute of this kid letting me makeover her room before she’s old enough to protest. Did you do the same thing with your children when they were little?

I’d love to hear what you think! I’m always thrilled to get a little love from you guys. 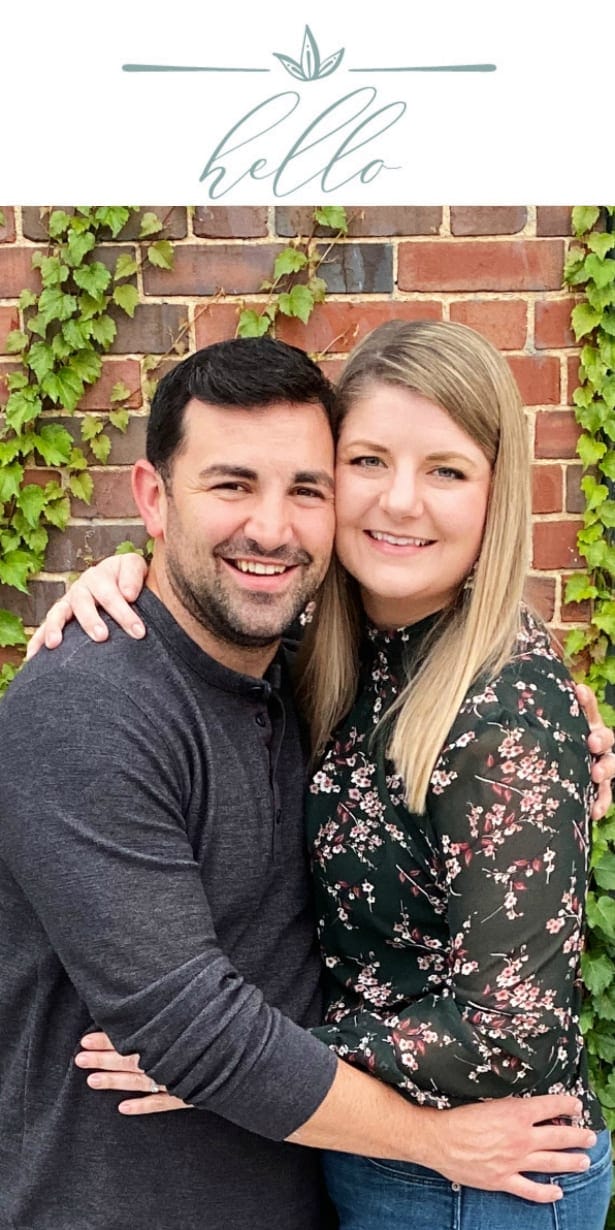 We’re Robert and Lauren, a DIY-loving duo just fighting the good fight in making our house a home one renovation and thrifted decorating adventure at a time. Home wasn’t built in a day, but the journey is half the fun. We’re so glad to have you here, and we hope you feel inspired to love the home you have.

We are a participant in the Amazon Services LLC Associates Program, an affiliate advertising program designed to provide a means for us to earn fees by linking to Amazon.com and affiliated sites.

Thrifting tricks, home decor shopping secrets, budget design strategies, and inspiration right in your inbox.
Your information will NEVER be shared or sold to a 3rd party. Pinky promise!
23shares