If Plan A doesn’t work out, there are 25 more letters in the alphabet. That’s at least my motto after Plan A of this month’s Trash to Treasure Tuesday was a total flop.

Lately, I’ve been seeing all kinds of funky cool boho-ish vases floating around at Anthropologie and Pier 1 and boutique shops, and I figured, “Hey! I can wield a mean Sharpie paint pen and maybe make my own from some old jars I have lying around for basically nothing.”

And then I realized after attempting it and the result looking like my 5 year-old would have done a better job that maybe I’m just not meant to be all funky cool boho. Because all I can draw is stick people.

Inspiration, meet reality. At least it was good in theory, I guess. 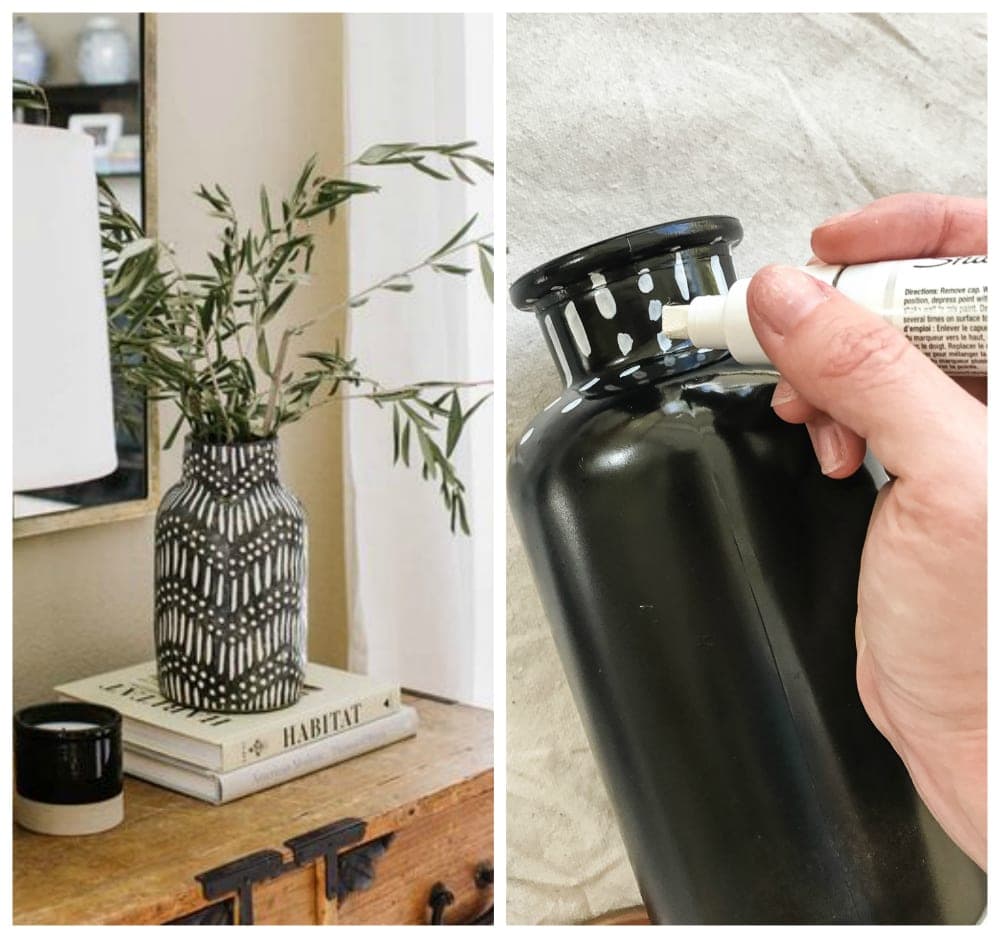 But I recalled this crafty DIY marbling technique that I’d been so excited to try since seeing it floating around Pinterest a year ago, and all was funky cool again. At least for this year’s Halloween entryway that is. 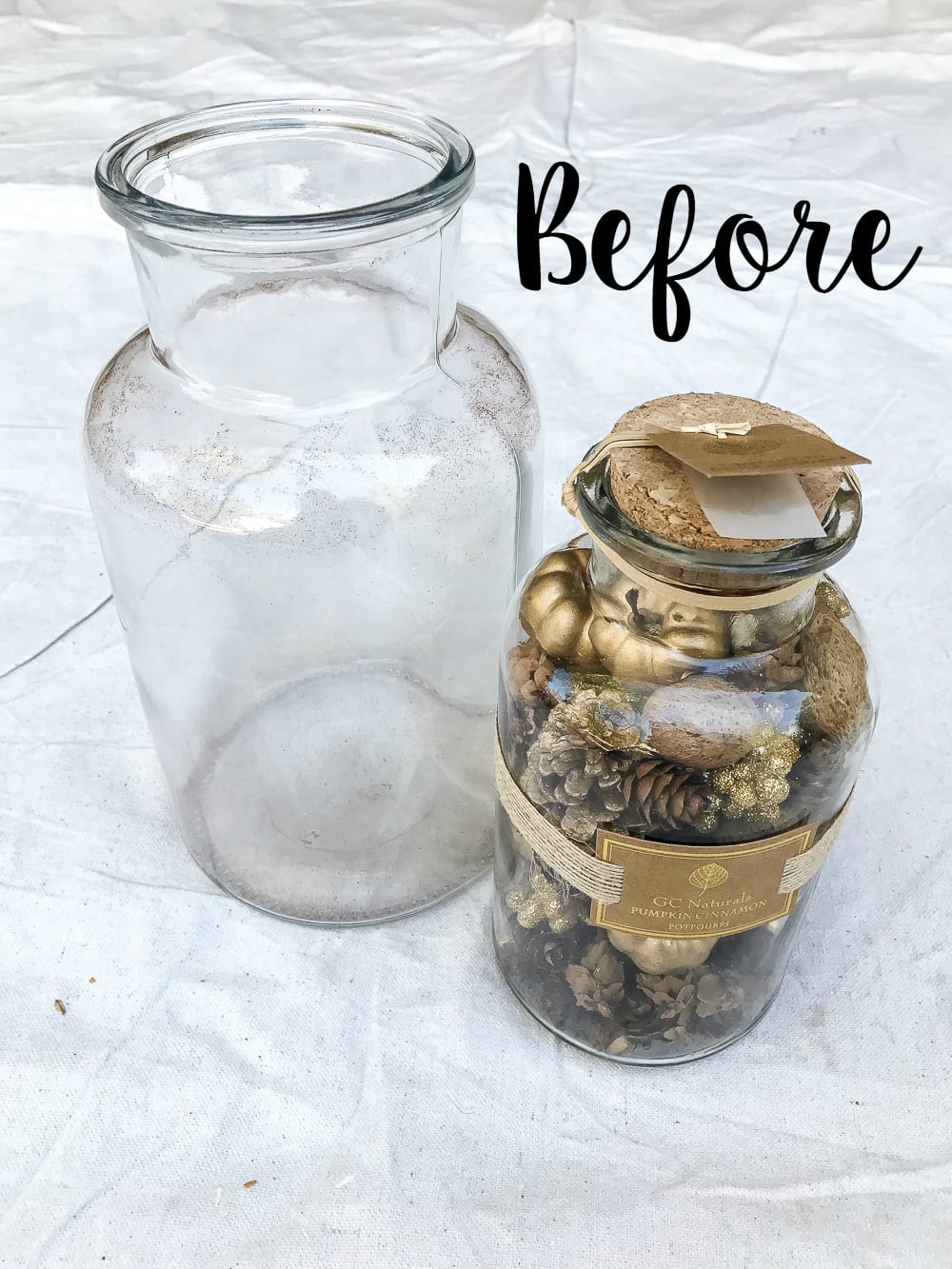 It all started with these random potpourri jars that were originally bound for the recycling bin after I used up the potpourri as bowl filler in our fall decor this year. They were just too good to be tossed though.

Supplies Used:  (Some affiliate links are provided below for convenience.)

I ended up spending just $1.50 each for my two gussied up vases since I already had the jars and old nail polish lying around and all I needed to buy was the can of spray paint. 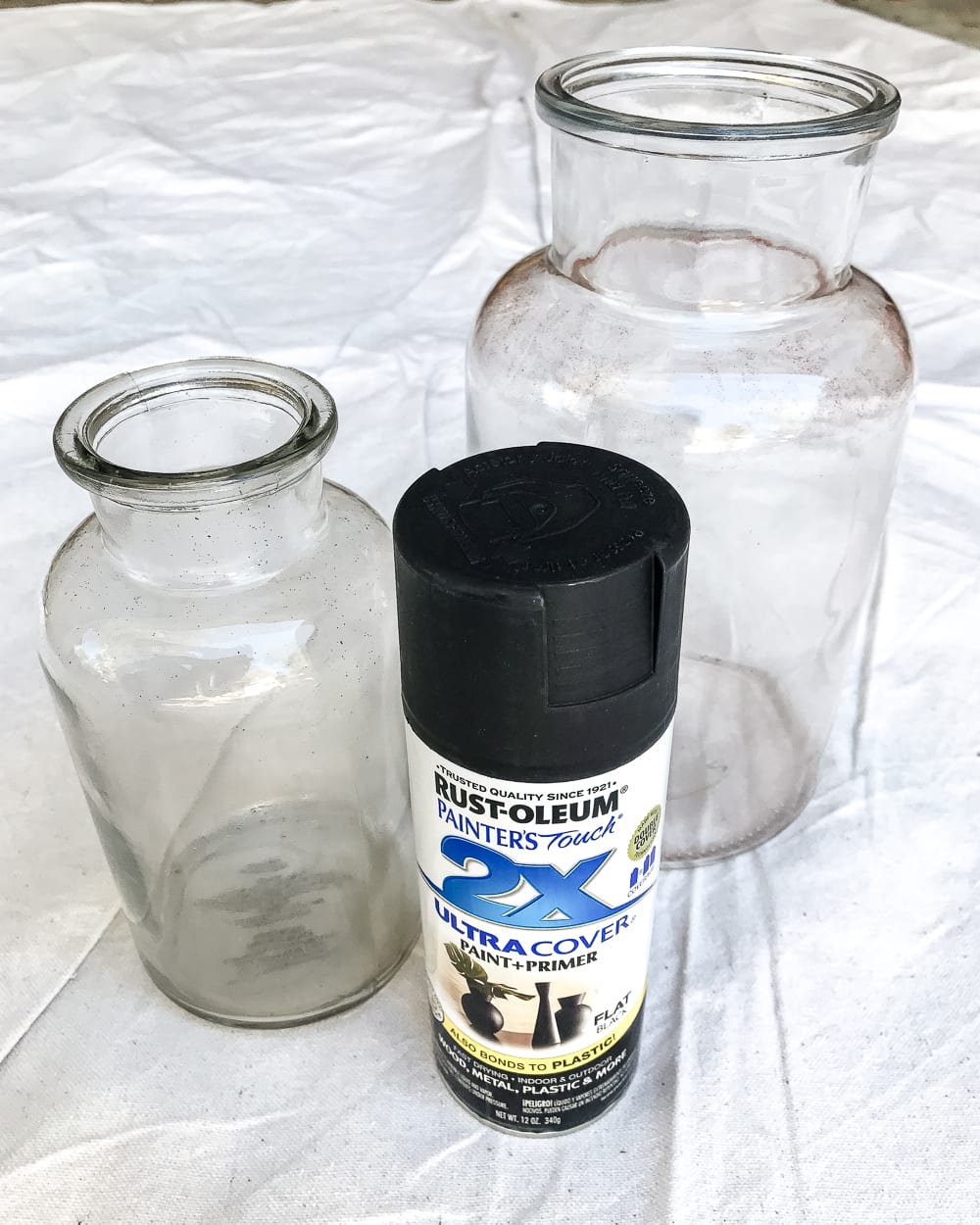 1. I gave both jars a cleaning and two even coats of the flat black spray paint first and let dry thoroughly. 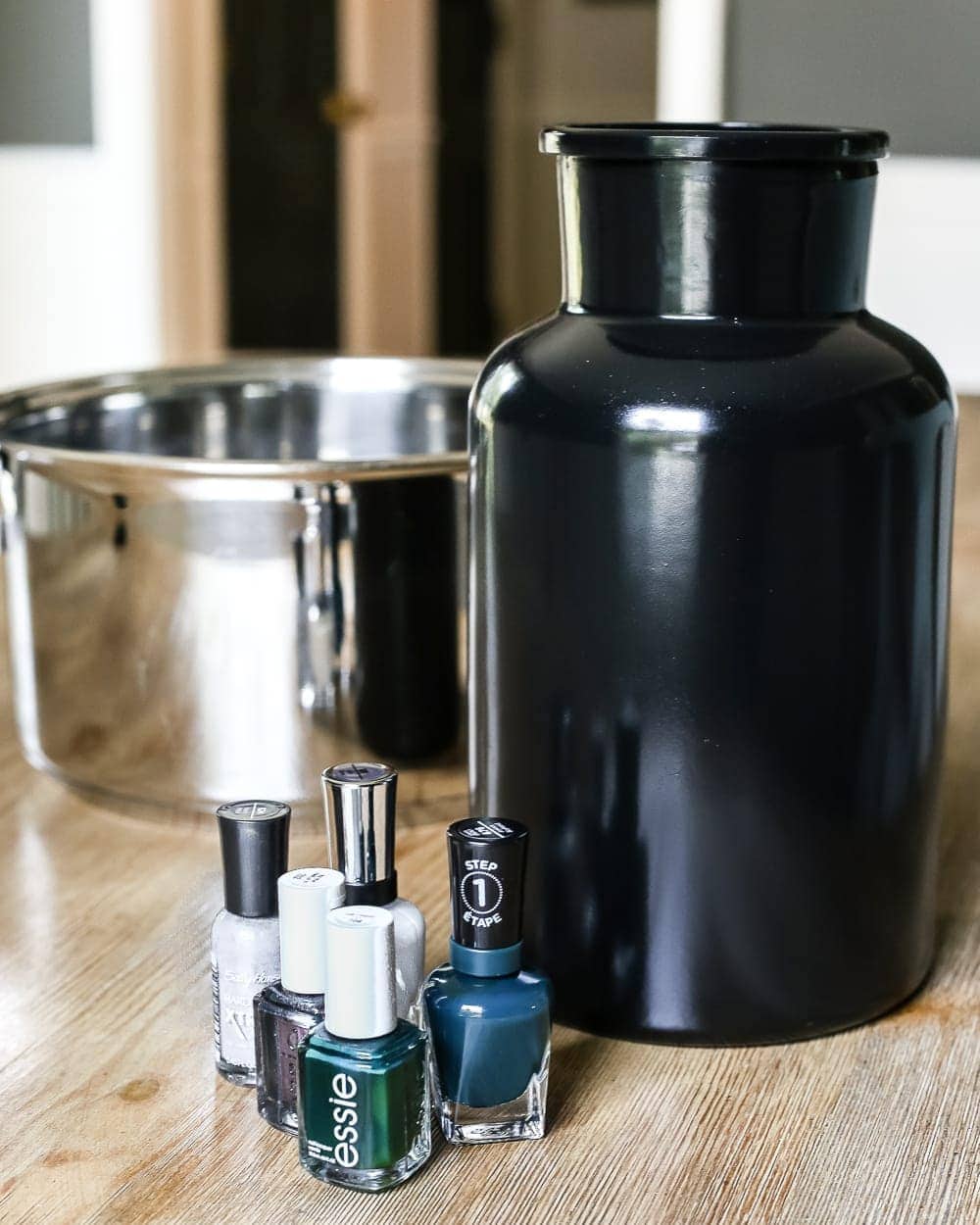 2. After letting the jars dry overnight, I filled a large pot with room temperature water and placed it on a trash bag as my drop cloth since the next step can get pretty messy. 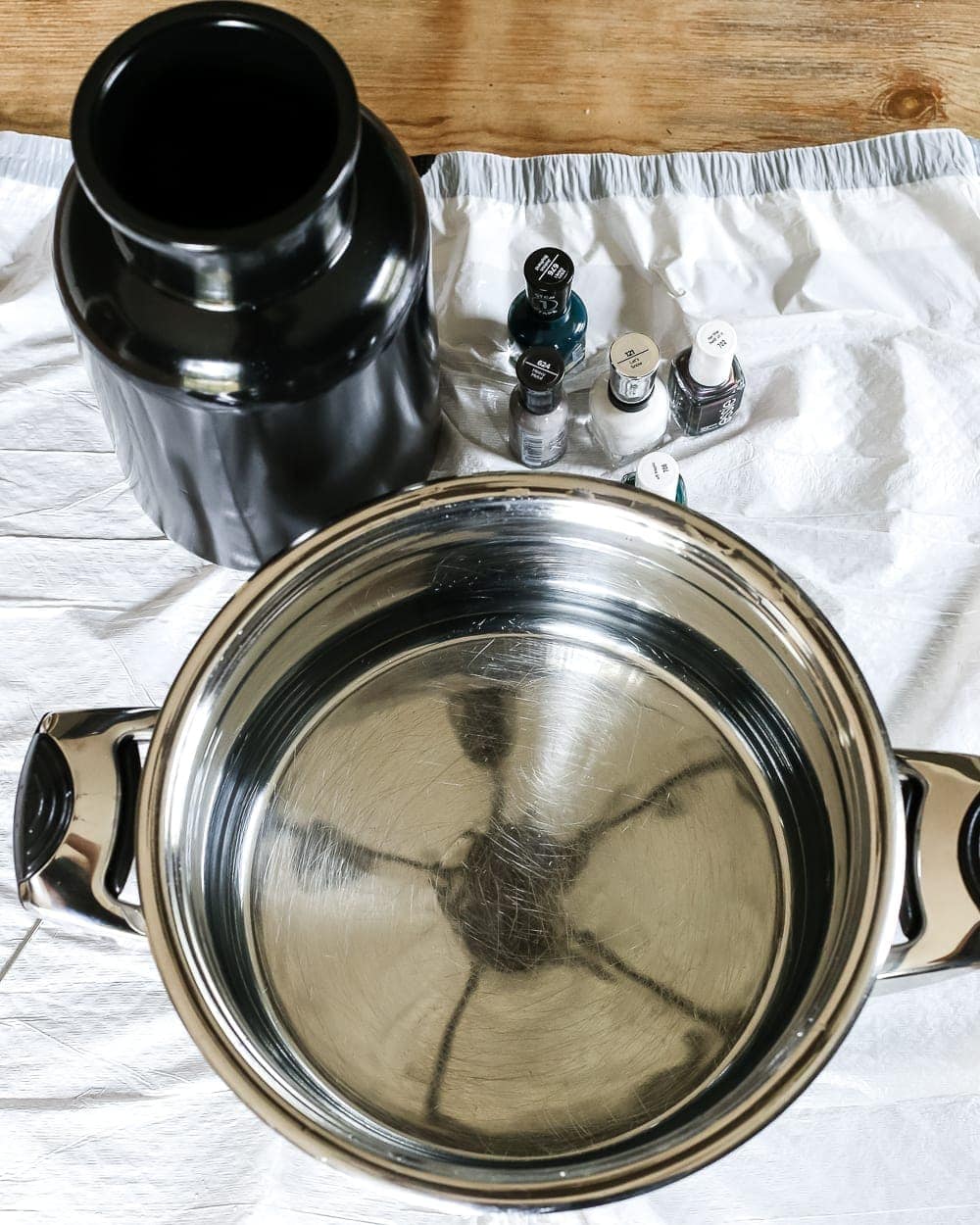 3. Then, I haphazardly poured some nail polish of each color into the water. The polish will mostly float on top of the water. 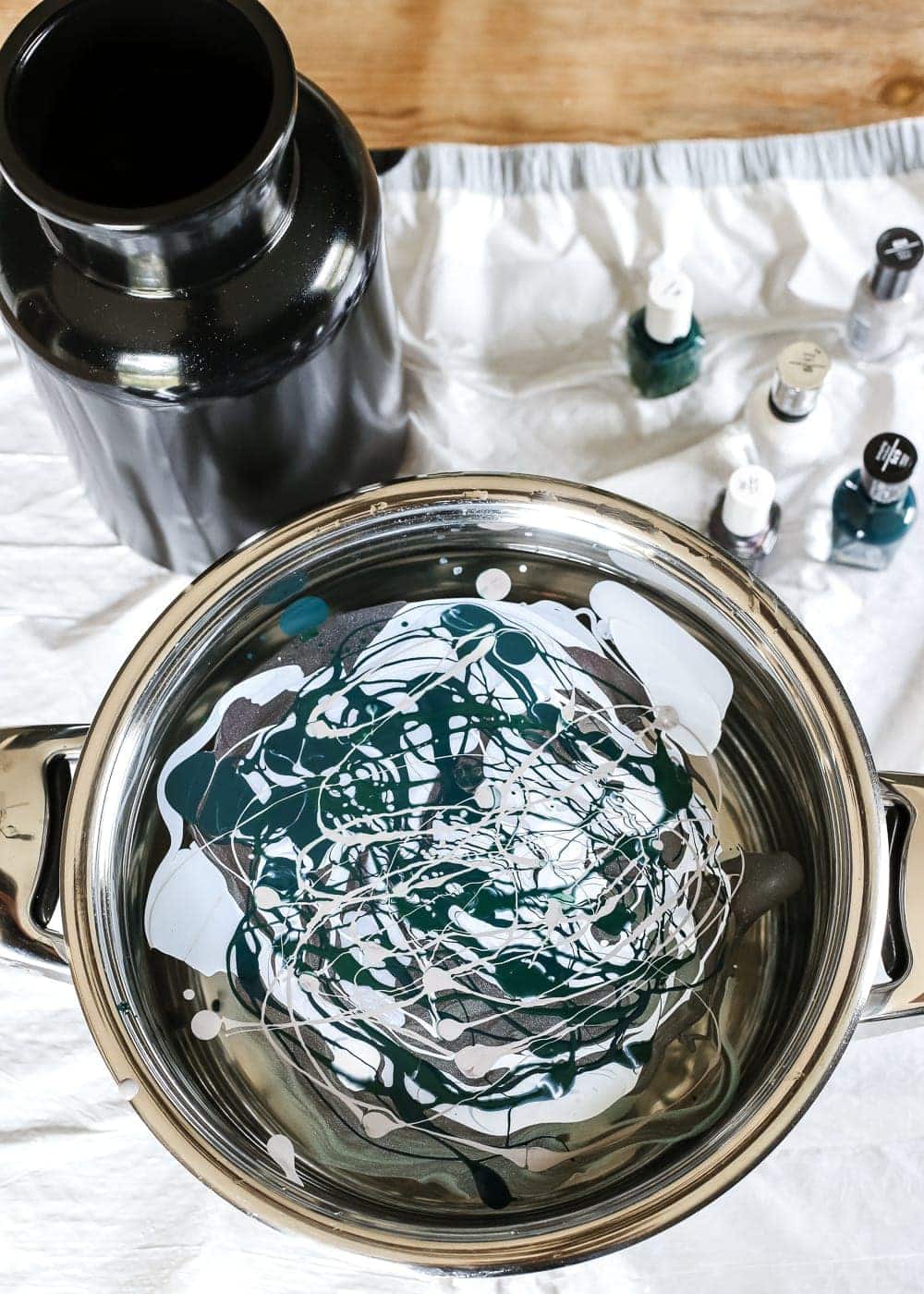 4. Work quickly after pouring your polish in and dip one of the jars into the floating polish. The large pot worked well for my small jar, but for the large jar, I figured out I had to use a deeper bucket. I’d wear rubber gloves for the dipping step too since it will take quite a scrubbing of acetone to remove the polish from your hands afterward. (Which I had to do since I didn’t think ahead like that. Oy.) 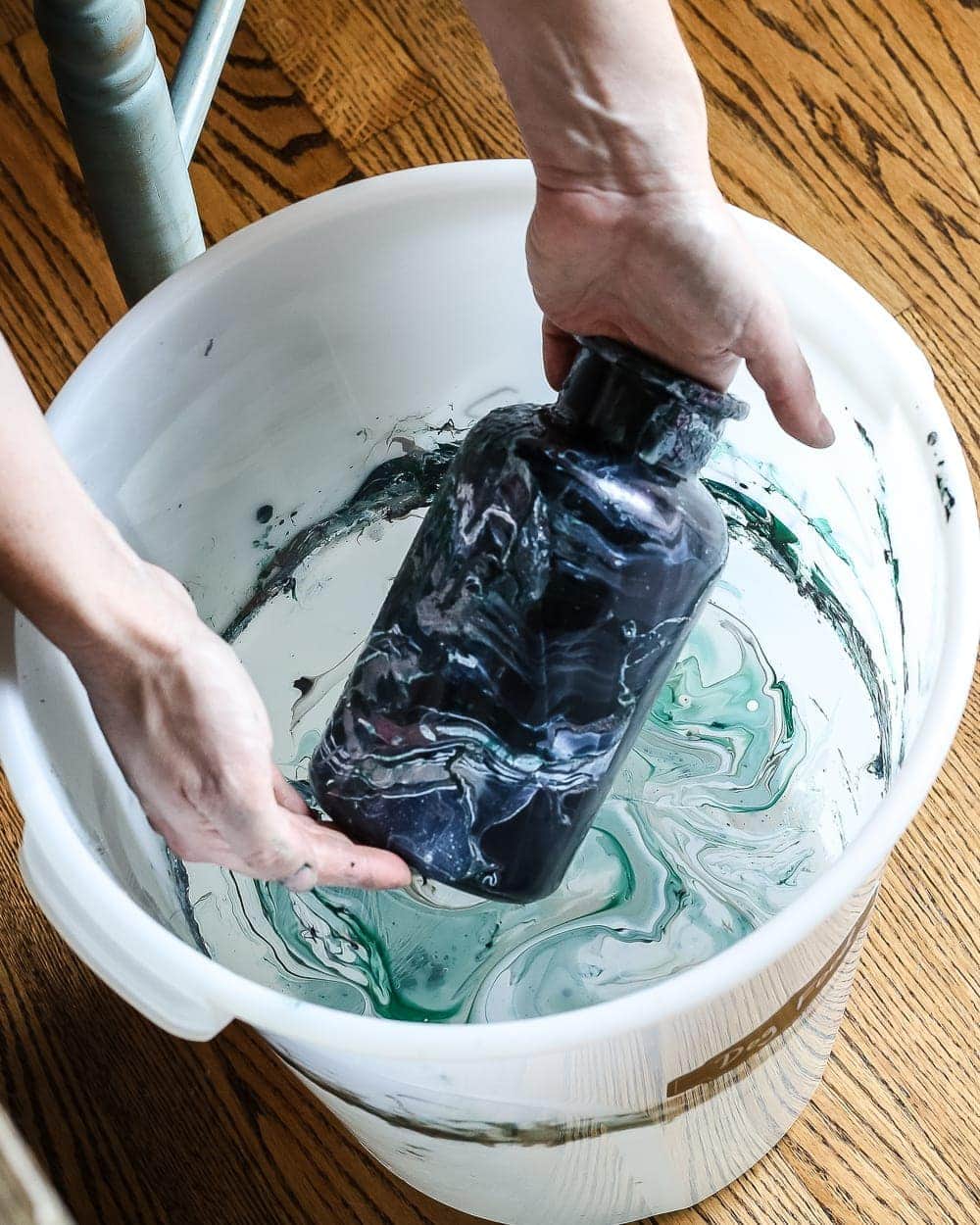 5. Set the jars on your plastic drop cloth and wait an hour to fully dry. You can scoop out the floating nail polish with your gloved hands from your bucket or pot at this point too so you won’t have to pour polish down your drain.

Once the jars were dried I stuck them on our foyer chest for a little funky Halloween-y fun. (You can see our Halloween entryway from last year too.) 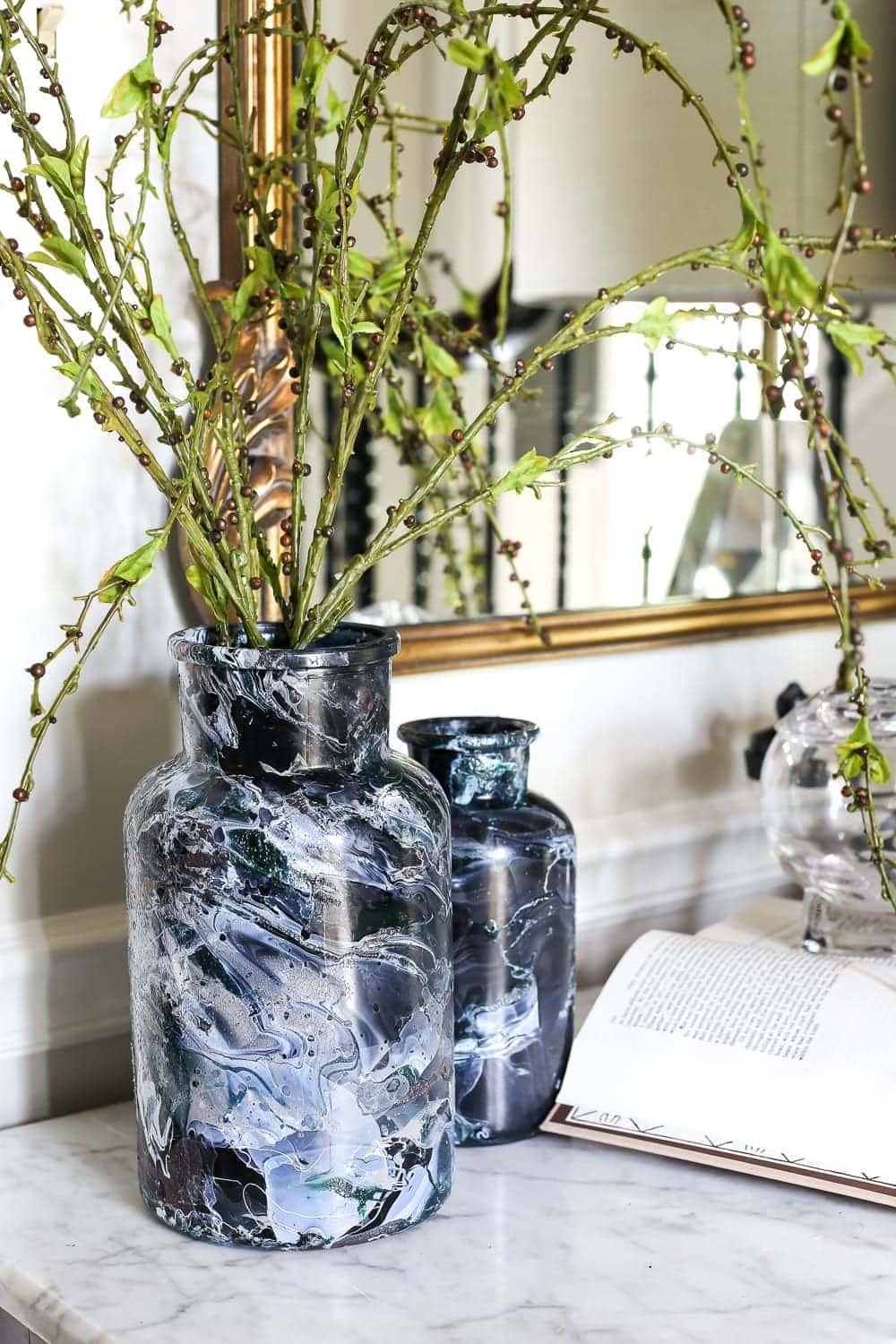 I really wasn’t going to go the Halloween route this year, but since our new neighborhood is packed full of kids and trick or treating is such a huge event, a spooky Halloween entryway was a must, right?

I tried not getting too spooky though. Because, to be honest, I’d probably creep myself out looking at it every day. This girl doesn’t do scary movies. Nope nope nope! 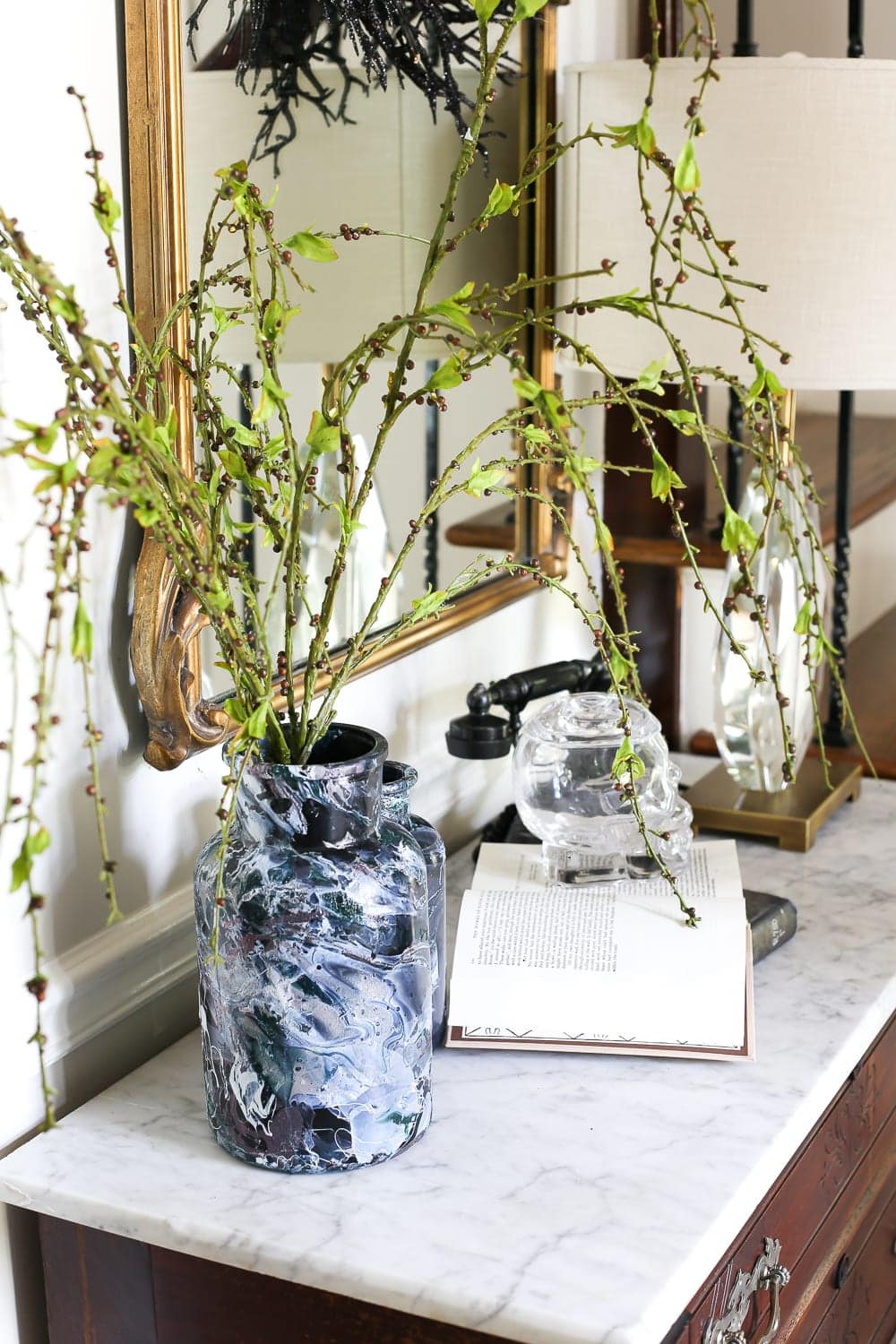 I found these willowy green branches at Hobby Lobby for 50% off that reminded me of the Wicked Witch for some reason. Don’t they look kind of creepy? If we had a weeping willow in our backyard, I would have just chopped them myself. 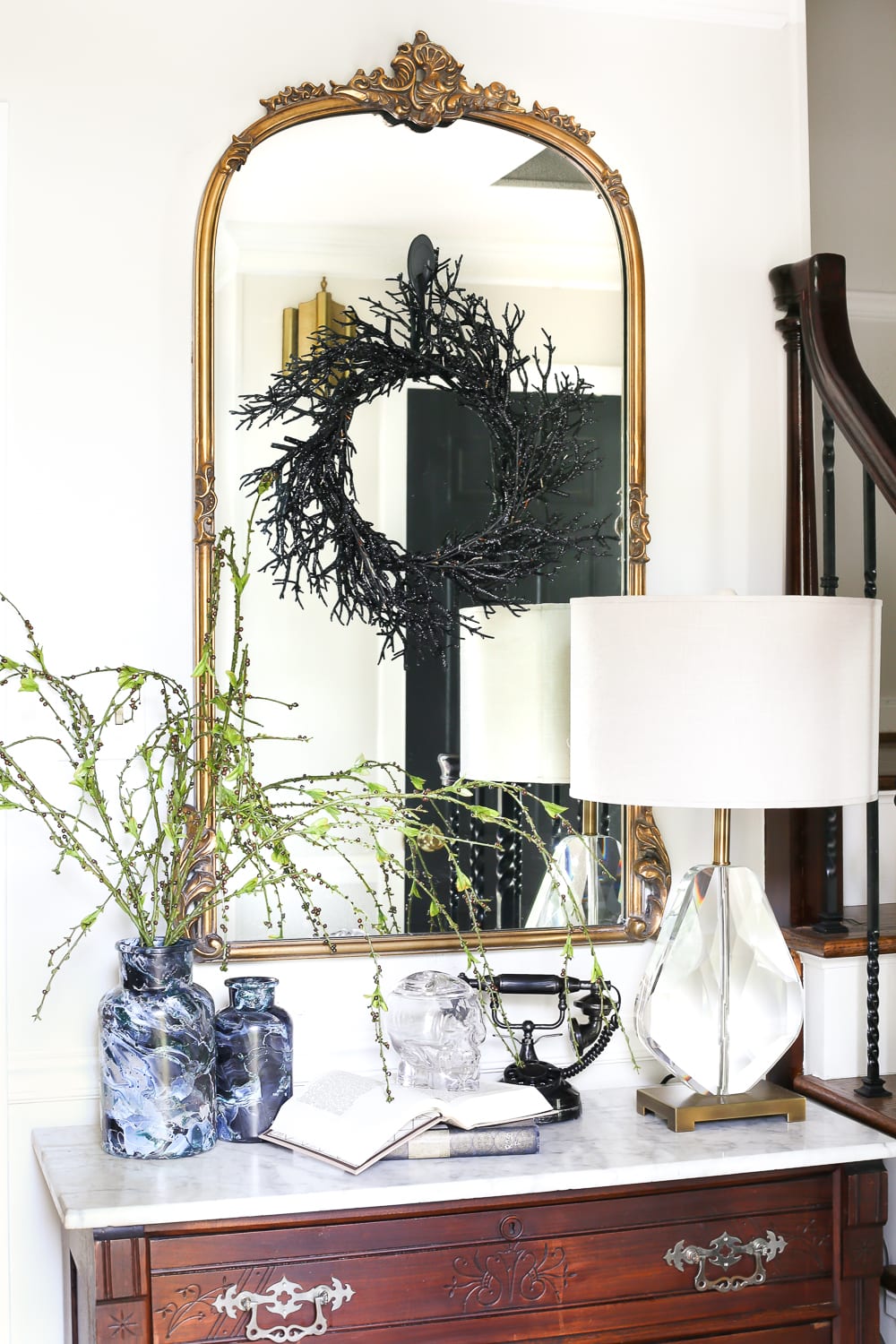 I dug out my bound collection of Edgar Allan Poe to display like I do every year. Ya know… the original gangsta. (American literature nerd alert over here.)

And even though this glass skull is supposed to be a candy jar, he looks extra sinister completely empty. (Robert says he’s an air head. Har har har. #DadJokes) 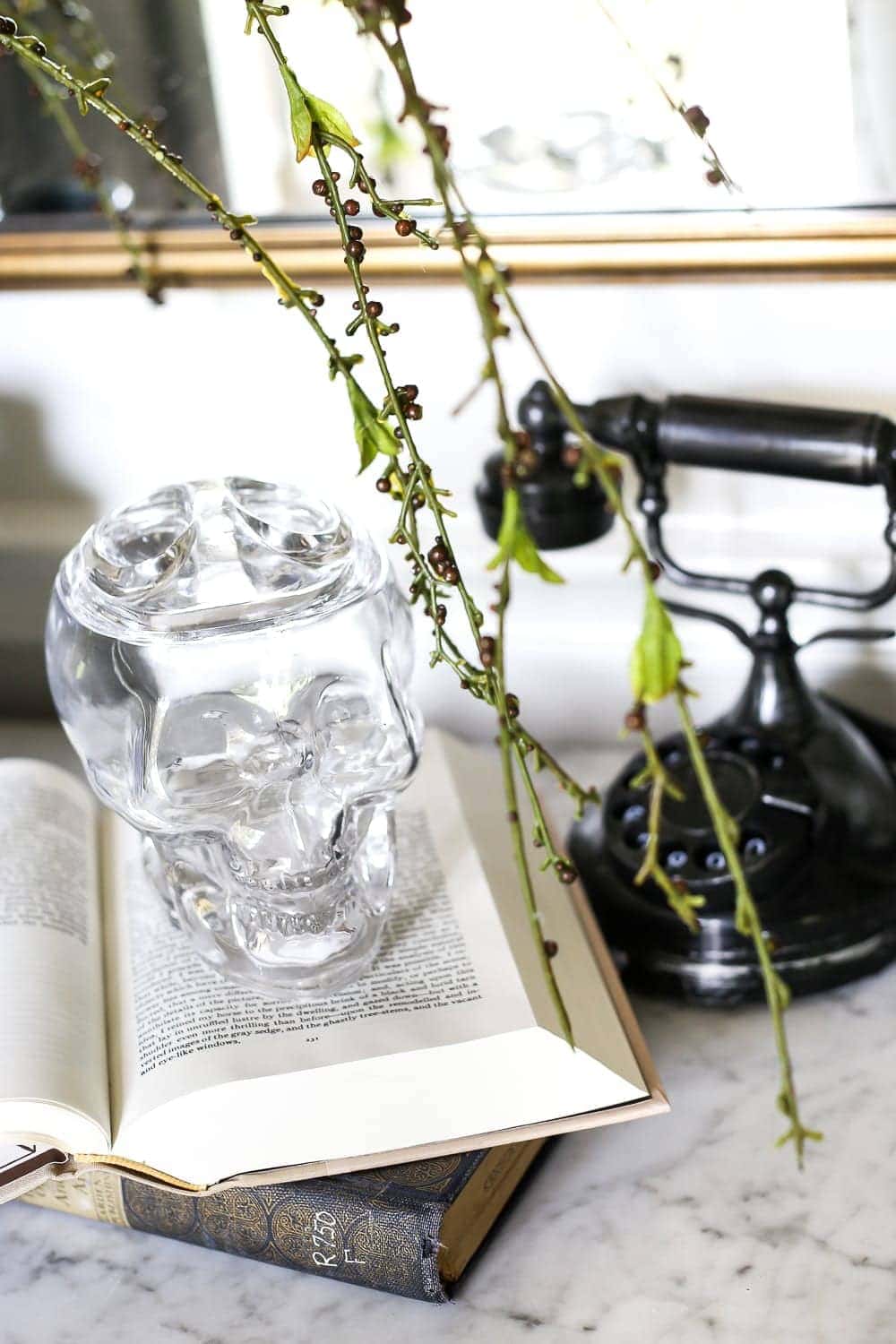 This antique style phone is just a plastic one I got from the Halloween decor aisle at Target, but it looks so real in person! I didn’t know it made scary noises until I was putting it together on this tabletop though and about jumped across the room. Lauren doesn’t do creepy! 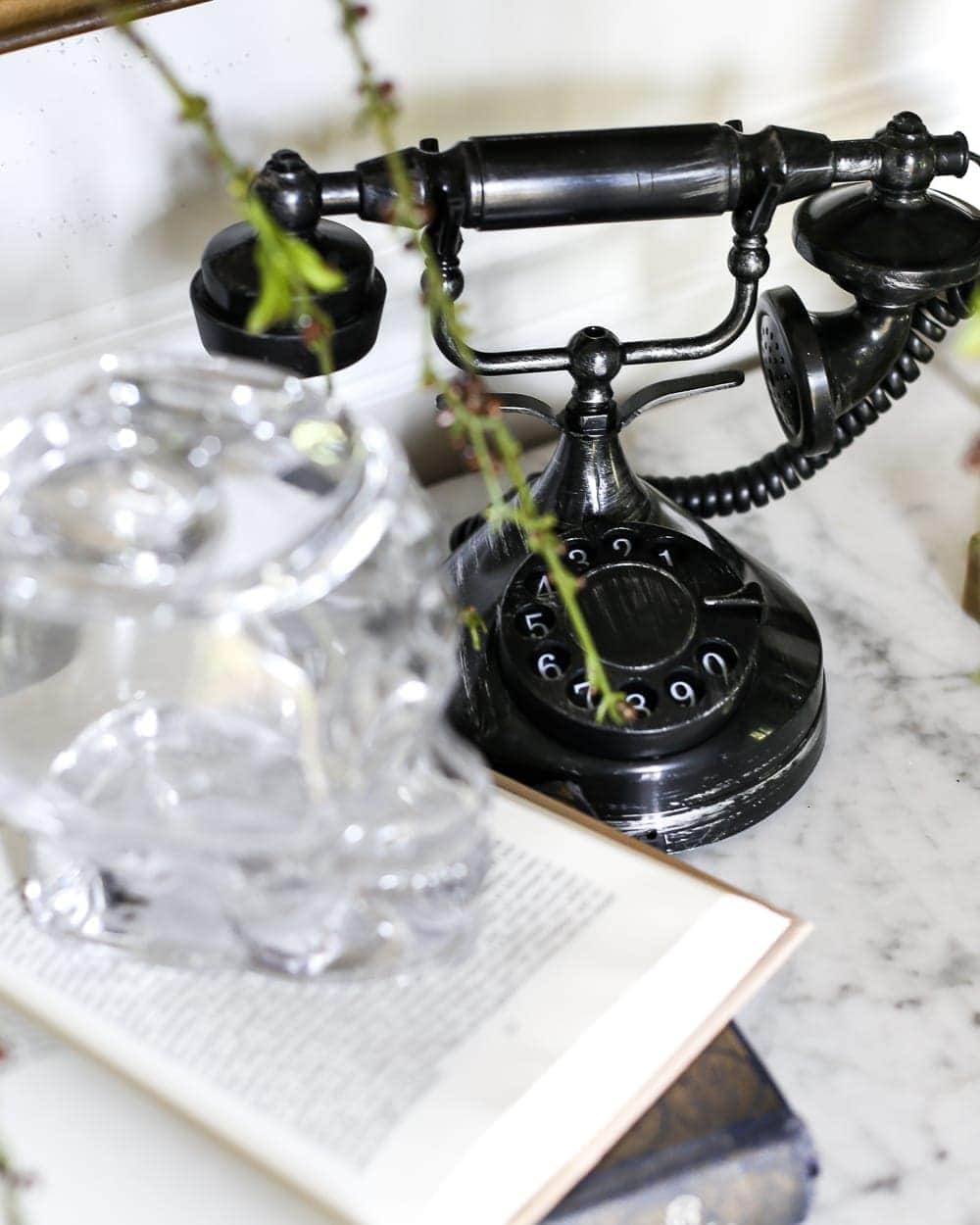 So now it’s a little bit spooky but still a little bit pretty and not so terrifying that Olivia will freak at the sight of it. Win/win/win 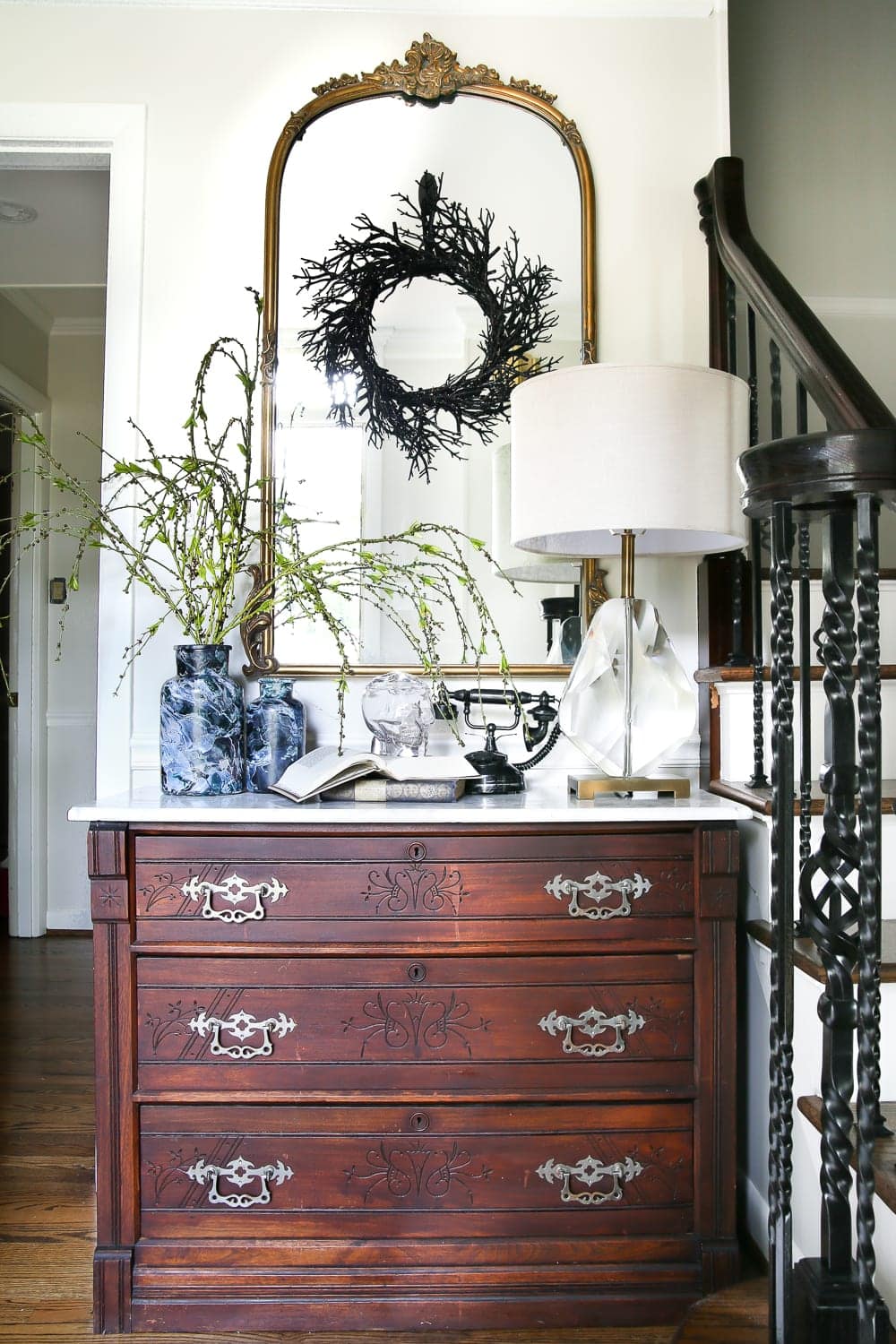 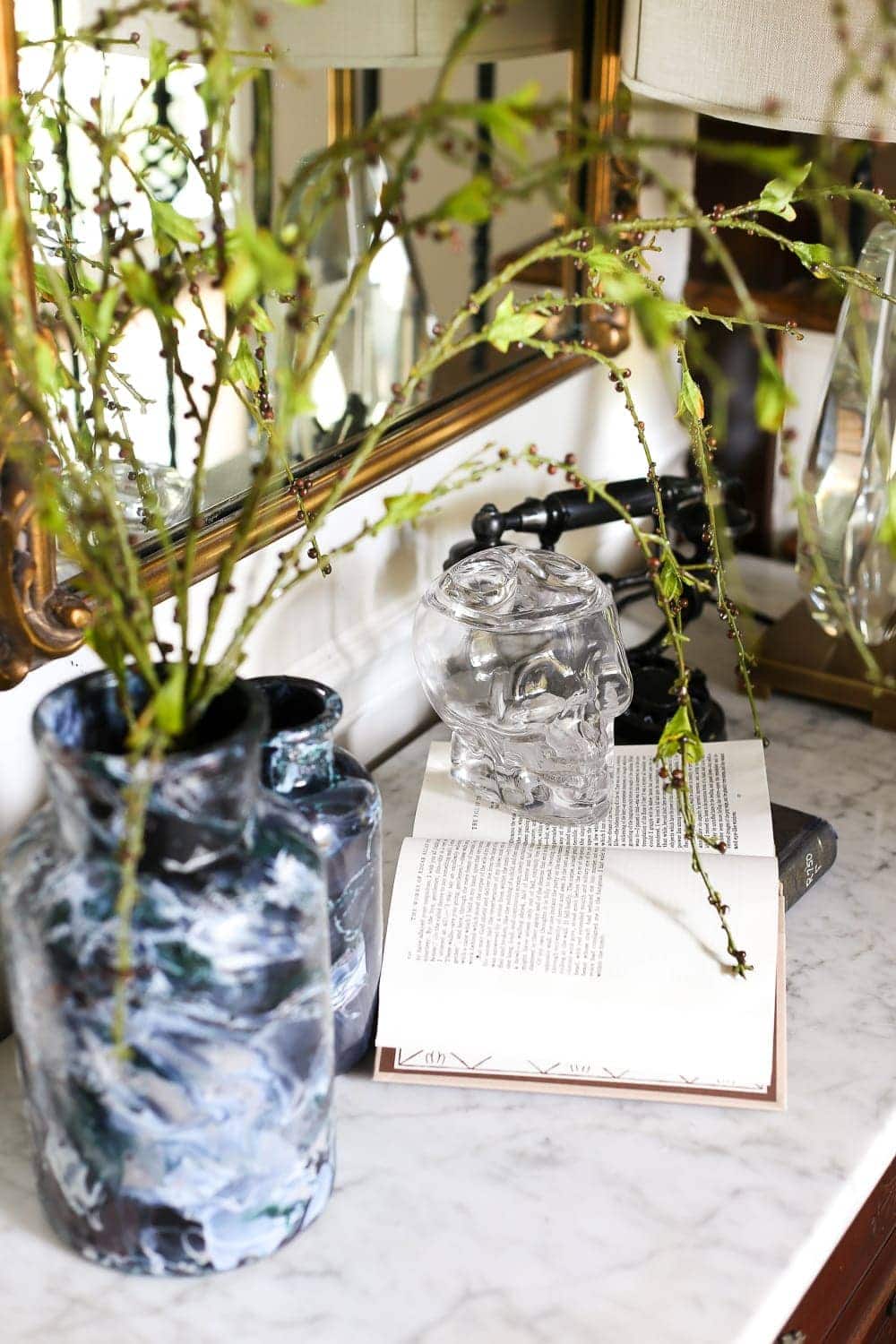 And I guess now I can check “marble-ize something” off of the crafty to-do list. Plan B can surprise you like that sometimes, right?

I can see where this could get addictive. I was actually looking around our house after finishing these wondering what I could add a marble effect to next.

If you want to know about any of the sources I used to decorate this little spot, here’s most of them: 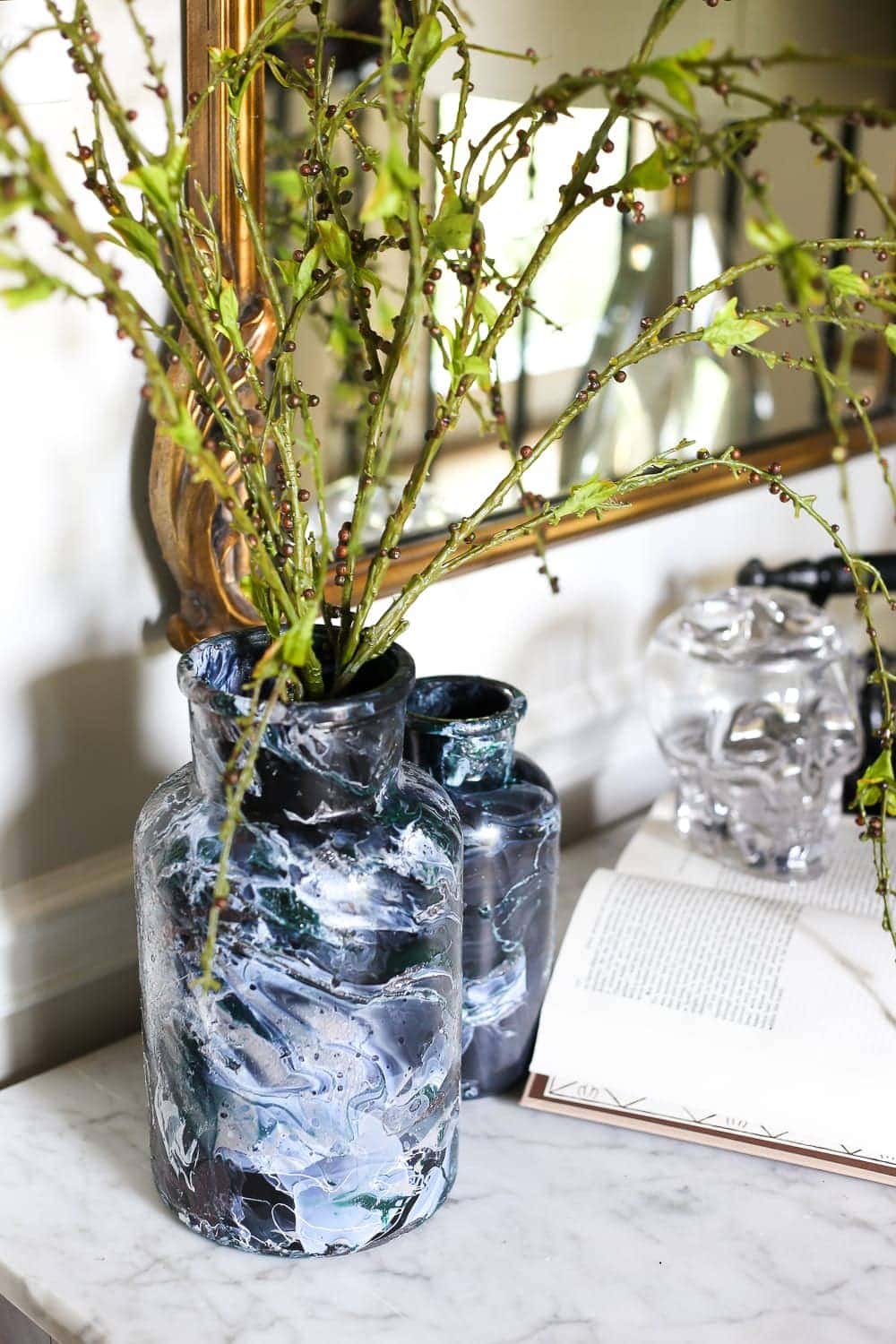 You can check out the rest of my Trash to Treasure Transformation crew’s before and afters below too: 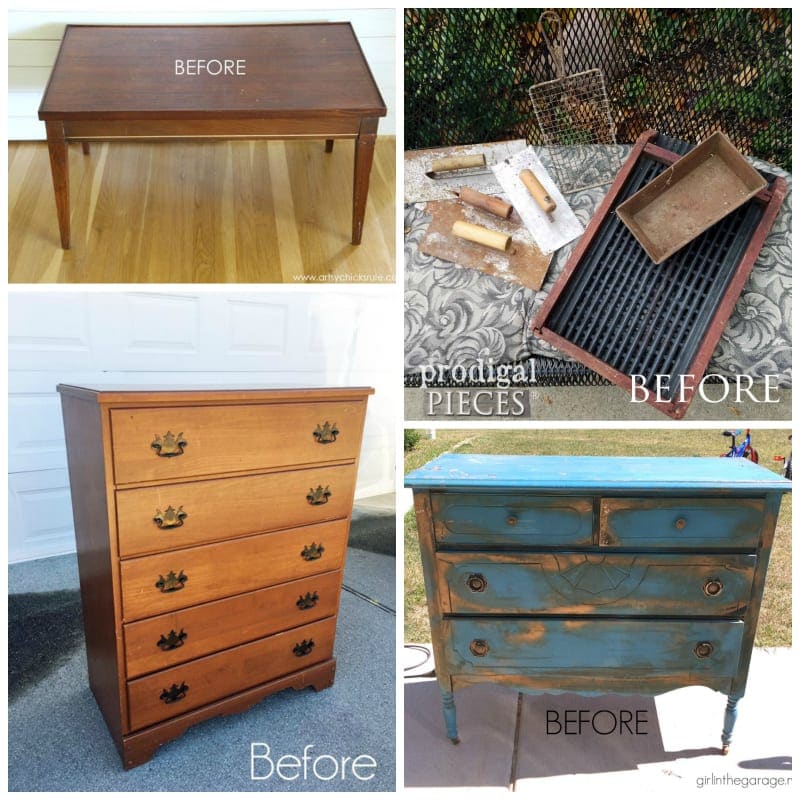 You can check out all of my past Trash to Treasure Transformations here if you want more thrifty DIY ideas. 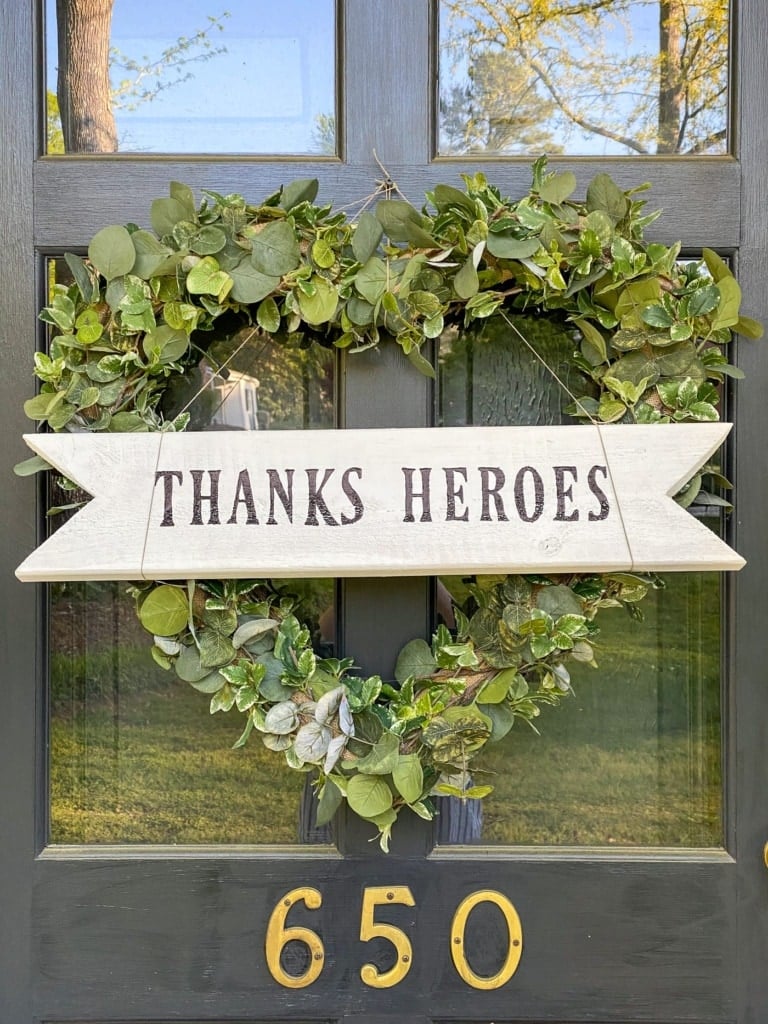 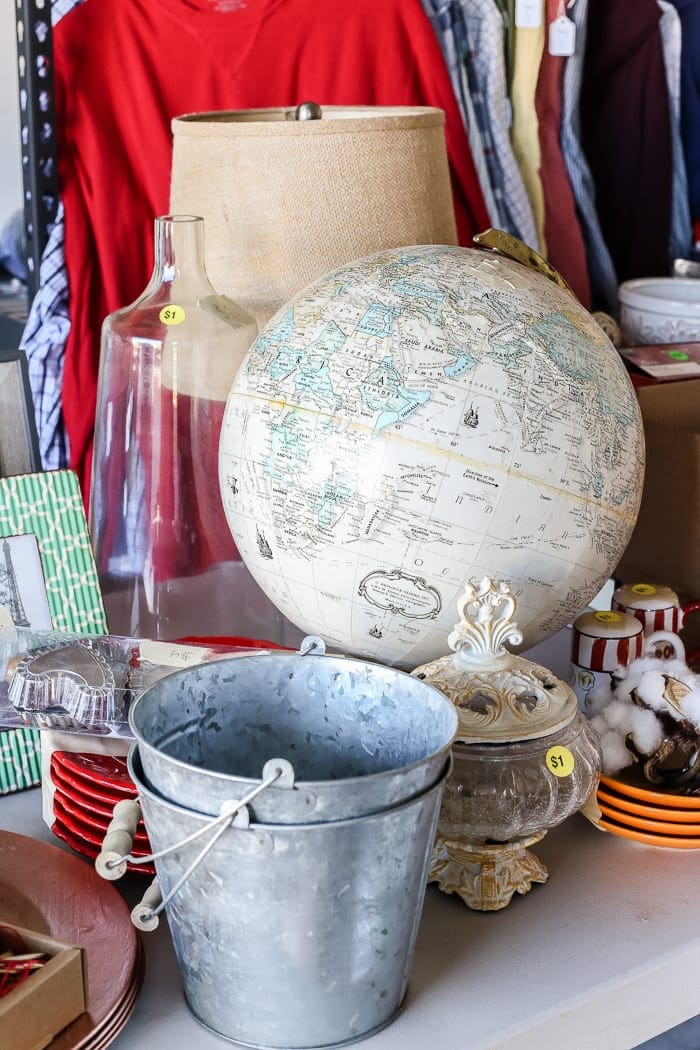 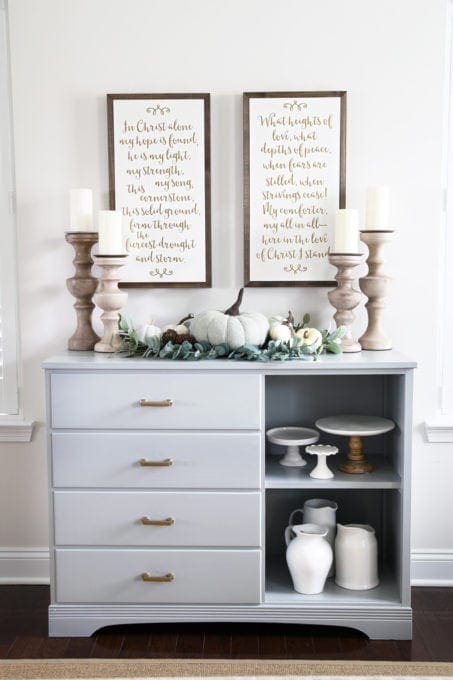 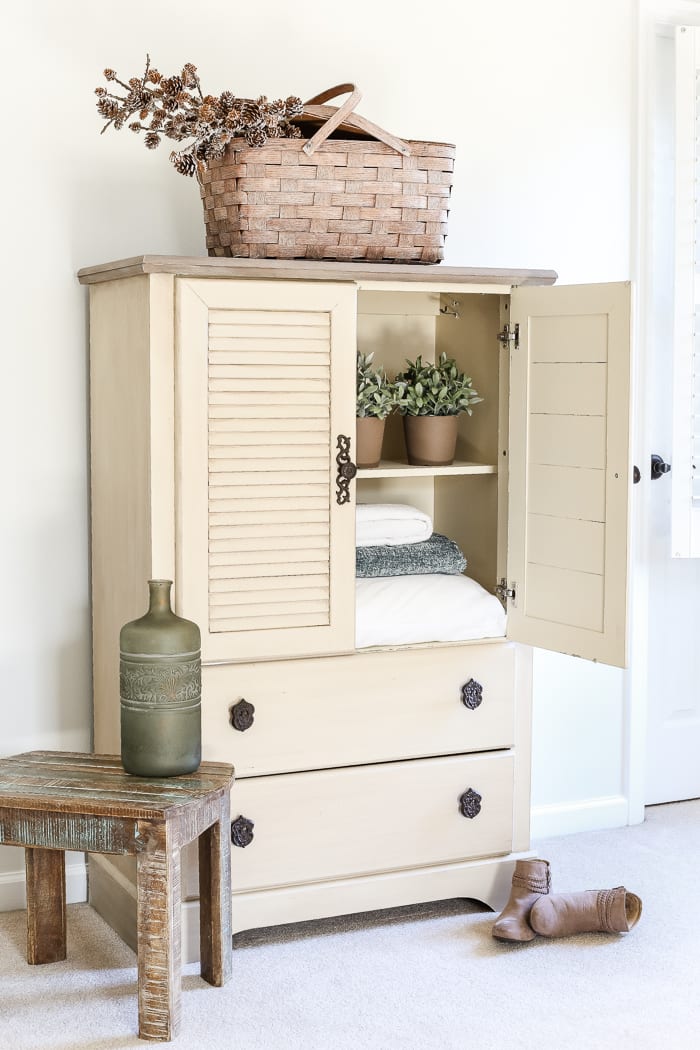 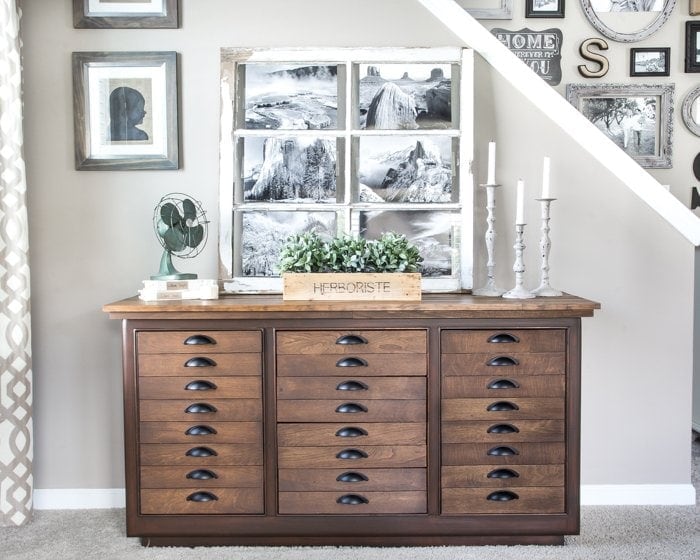