A thrifted bed gets a painted weathered wood Restoration Hardware look with no messy furniture stripping and in 3 quick steps.

A couple of weeks ago, I promised more details about the painted “weathered wood” bed that so many of you asked about in our last guest bedroom makeover update at my parents’ house.

I’ve done the math now (I know, former English teacher doing math… be afraid), and at this point, we’ve spent a grand total of $290 to fully furnish this bedroom with a dresser, armoire, pair of nightstands, and a queen-sized bed. Wowza!

This sleigh bed my parents found on Craigslist for $110 was already in good condition. But it had a lot of dings and scratches that needed a facelift. 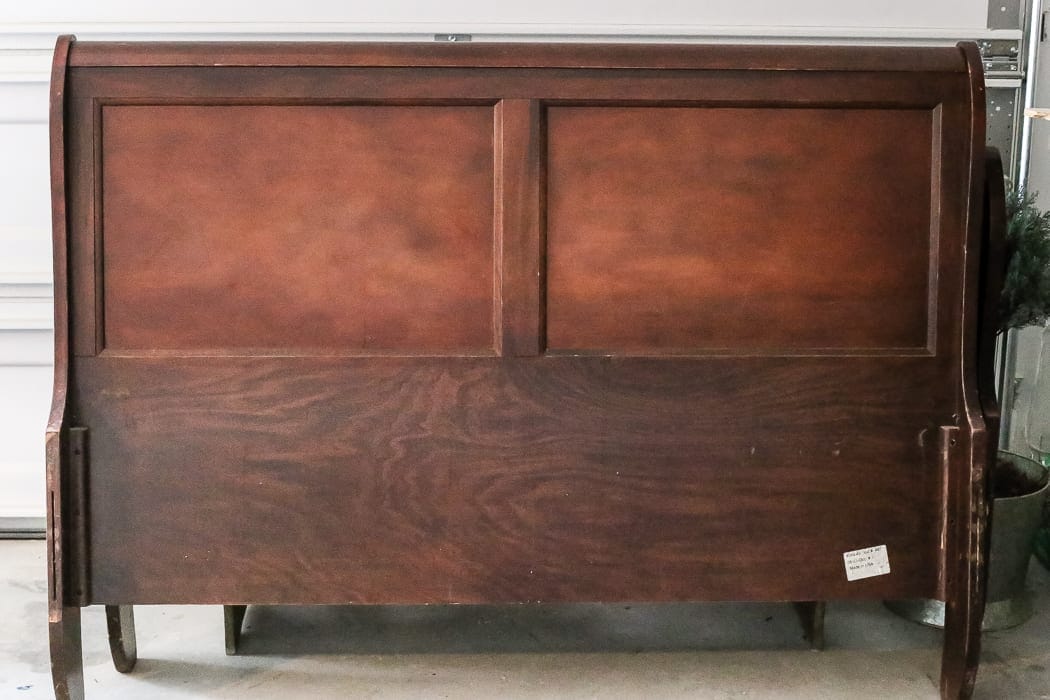 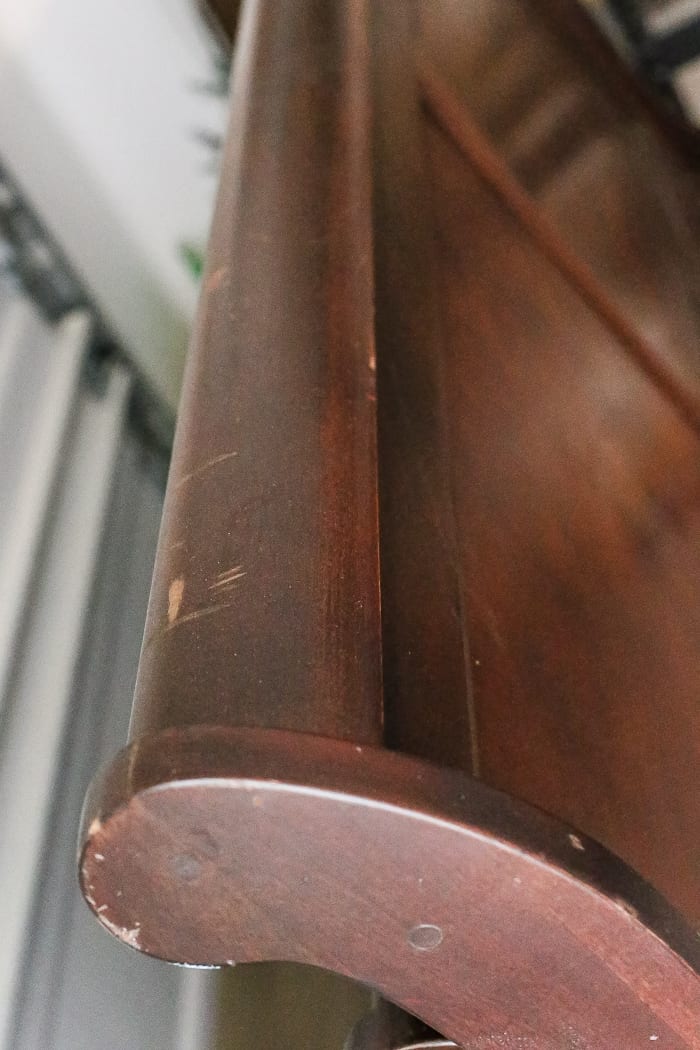 I wanted to tone down the cherry red stain, but sanding it down completely to refinish wasn’t an option since it was partially veneer. So I busted out my tried and true “weathered wood” paint method again.

Hey, if it ain’t broke… you know the rest.

I pretty much was able to use paint supplies I already had lying around from previous projects (don’t you love it when that happens?).

Sometimes you guys ask if I prep my furniture, but it usually depends on the piece. If I’m working with a piece that has noticeable wood oil or a residue on it, I wipe it down with Krud Kutter or liquid deglosser (way faster and just as effective as sanding, in my experience).

This bed seemed to have a great surface to work with from the very beginning, so it did just fine without any prep work.

I gave the entire bed two coats of the ASCP French Linen first, letting dry between each coat. (Pardon my icky cell phone shots. I was painting in my parents’ garage without my camera on this day.) 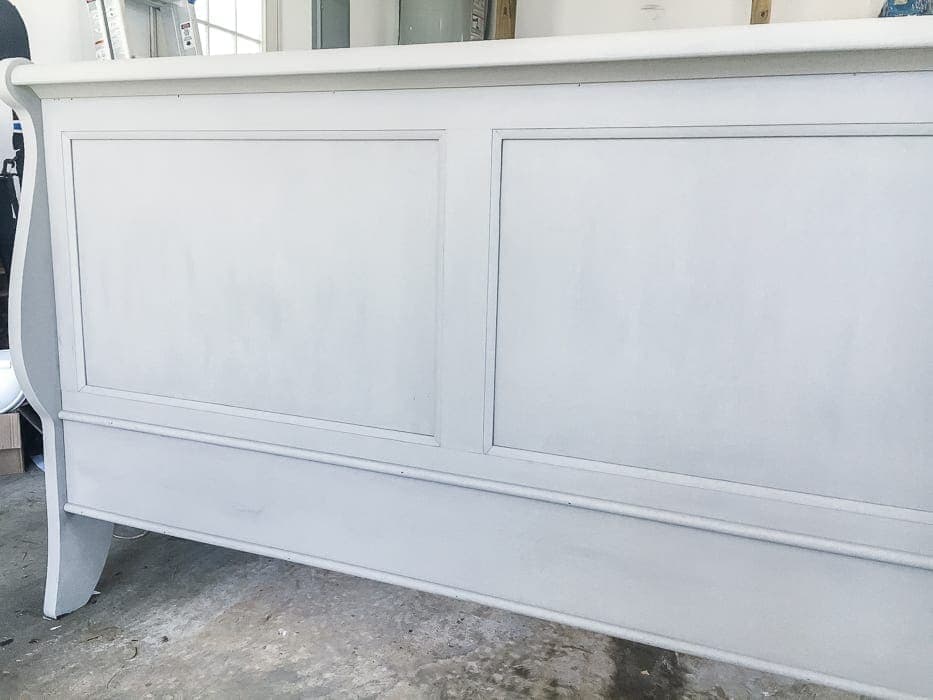 To add some depth, I gave everything a quick dry-brushing with the Fusion Raw Silk.

If you’ve never dry-brushed before, you just dip the tip of your paint brush into the paint, wipe it on a cloth or paper towel until it feels dry and start brushing onto your piece. I like using a chip brush because the bristles give it a natural weathered look and the strokes aren’t as rigid as a high quality brush. 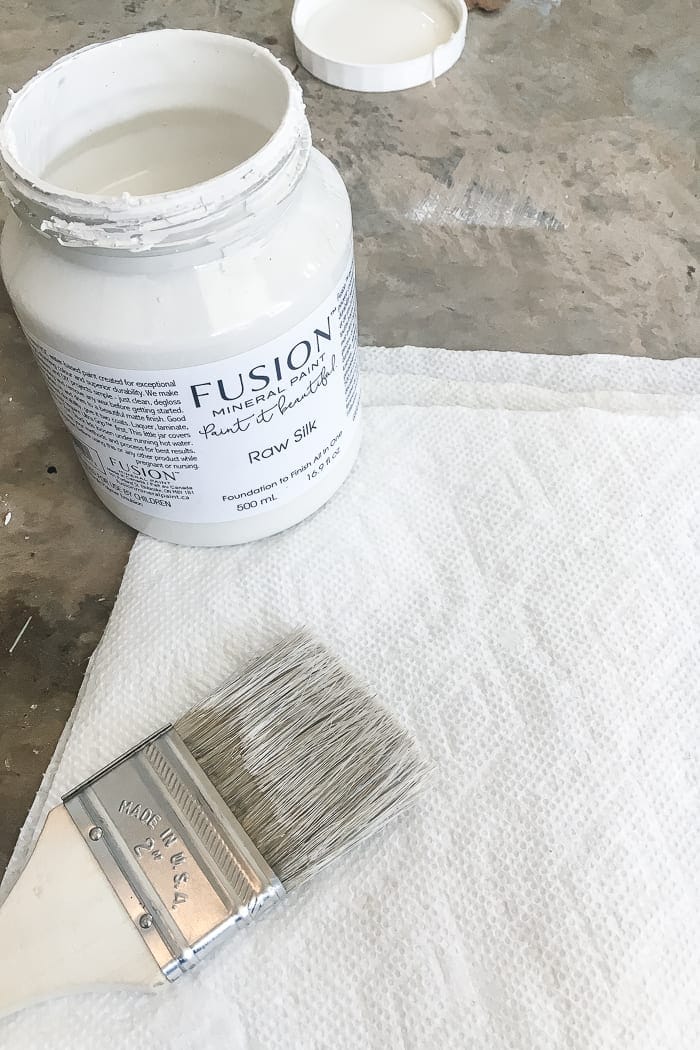 It’s very subtle, but it’s a great technique for layering. 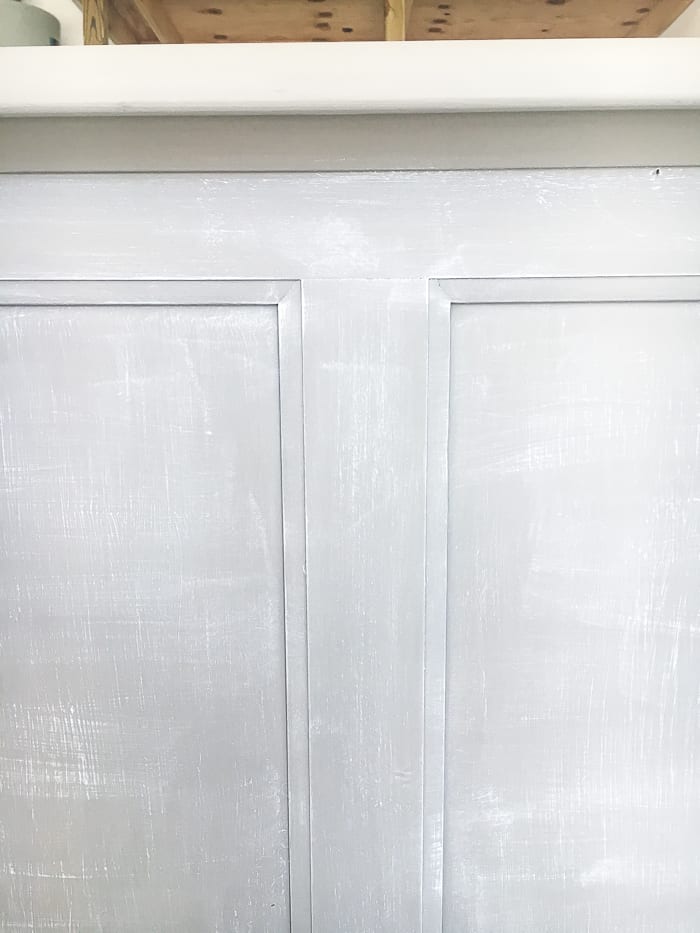 After dry-brushing, you can jump right into waxing with the Espresso wax. I like working my wax brush into the grooves and brushing in the direction that the “grain” of the wood would normally go. After about 5 minutes, I buff with a clean cloth.

I shot this before buffing, so the wax isn’t really perfect yet. 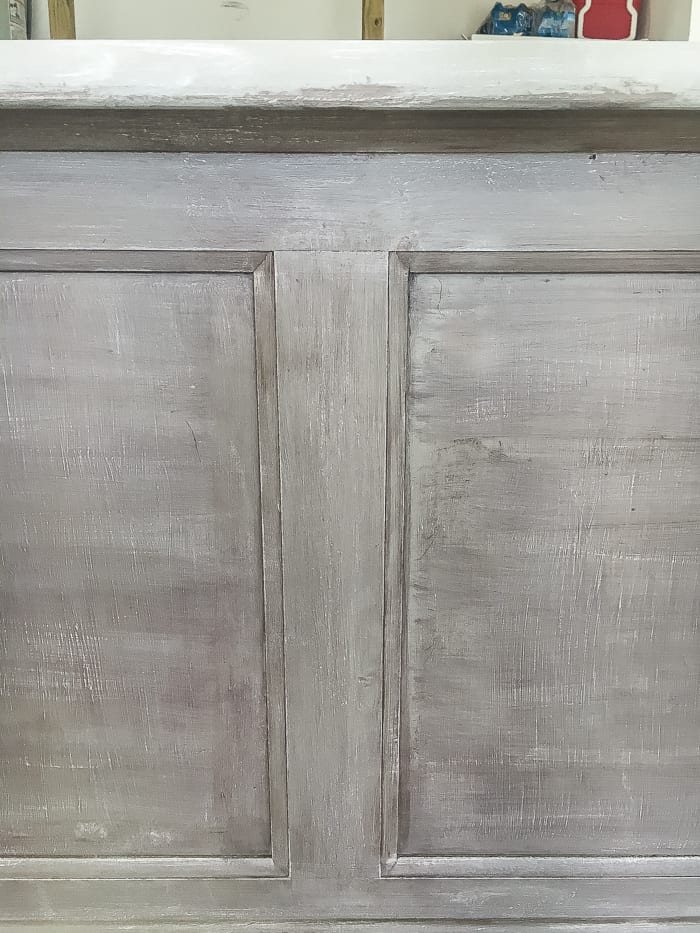 I let the wax cure for 24 hours, and then my dad and brother hauled it up to the guest room so we could all stare at it in wonder for a few hours. Okay, not really.

But it did give me some major heart-eyes. 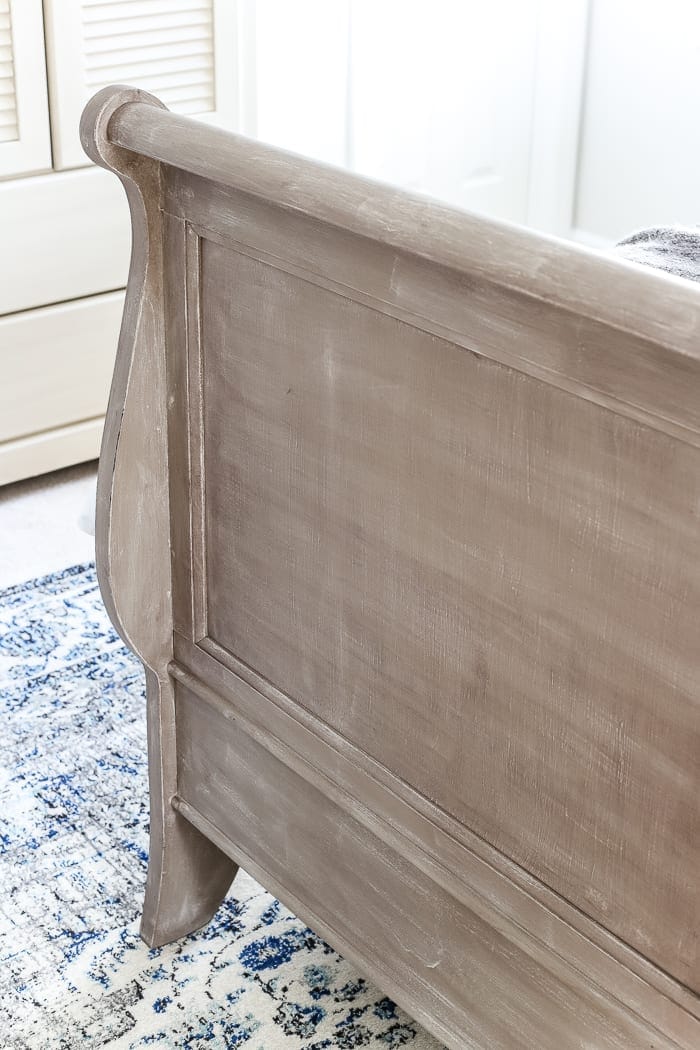 The bed isn’t “perfect” but that’s part of the charm, I think. After I photographed this, I noticed some waxing strokes that needed fixing, so I’ll be going back and touching that up. 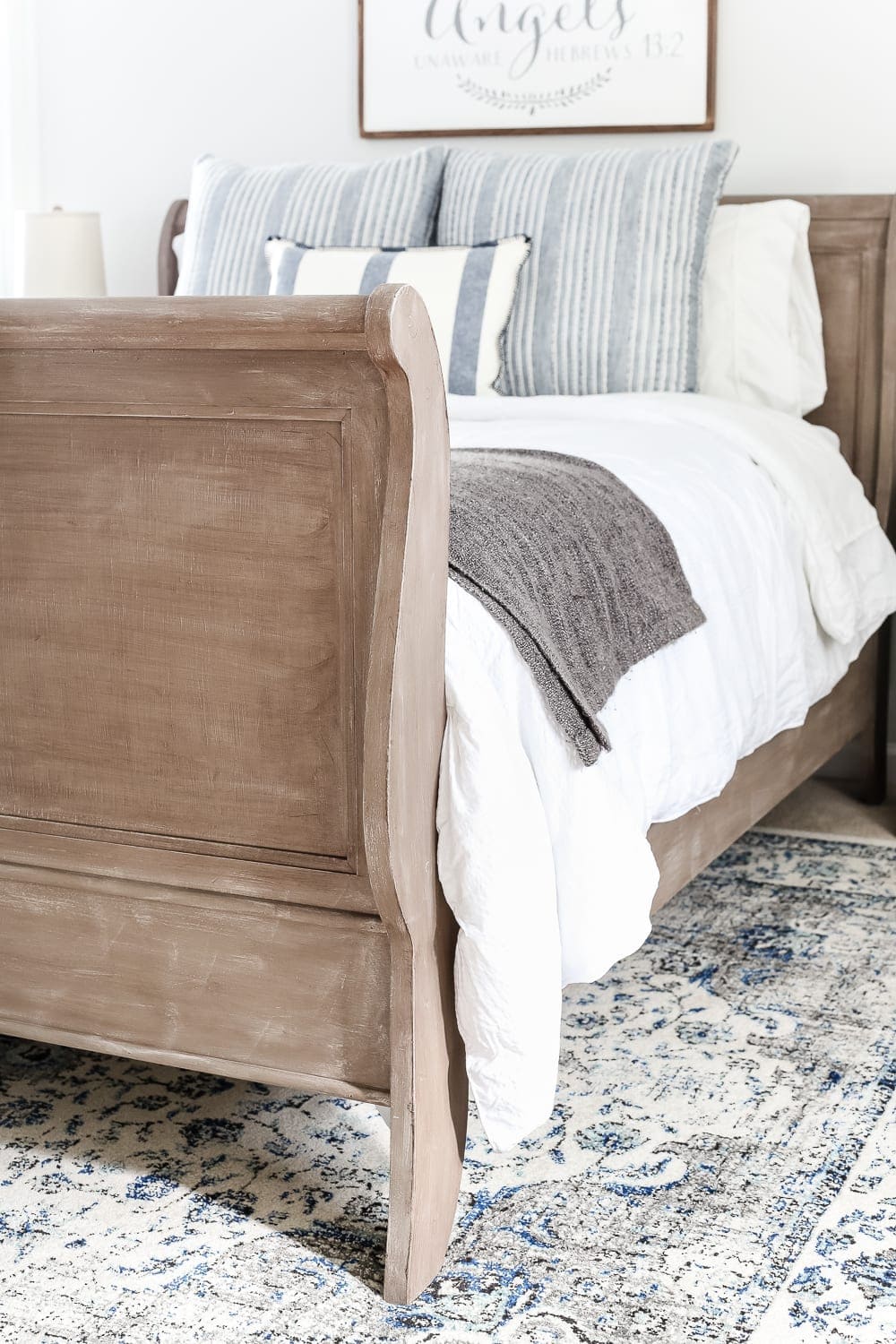 The bed coordinates so well with the two-tone nightstands I painted the other week without being too matchy-matchy. (Does matching furniture drive you bonkers? It does me.) 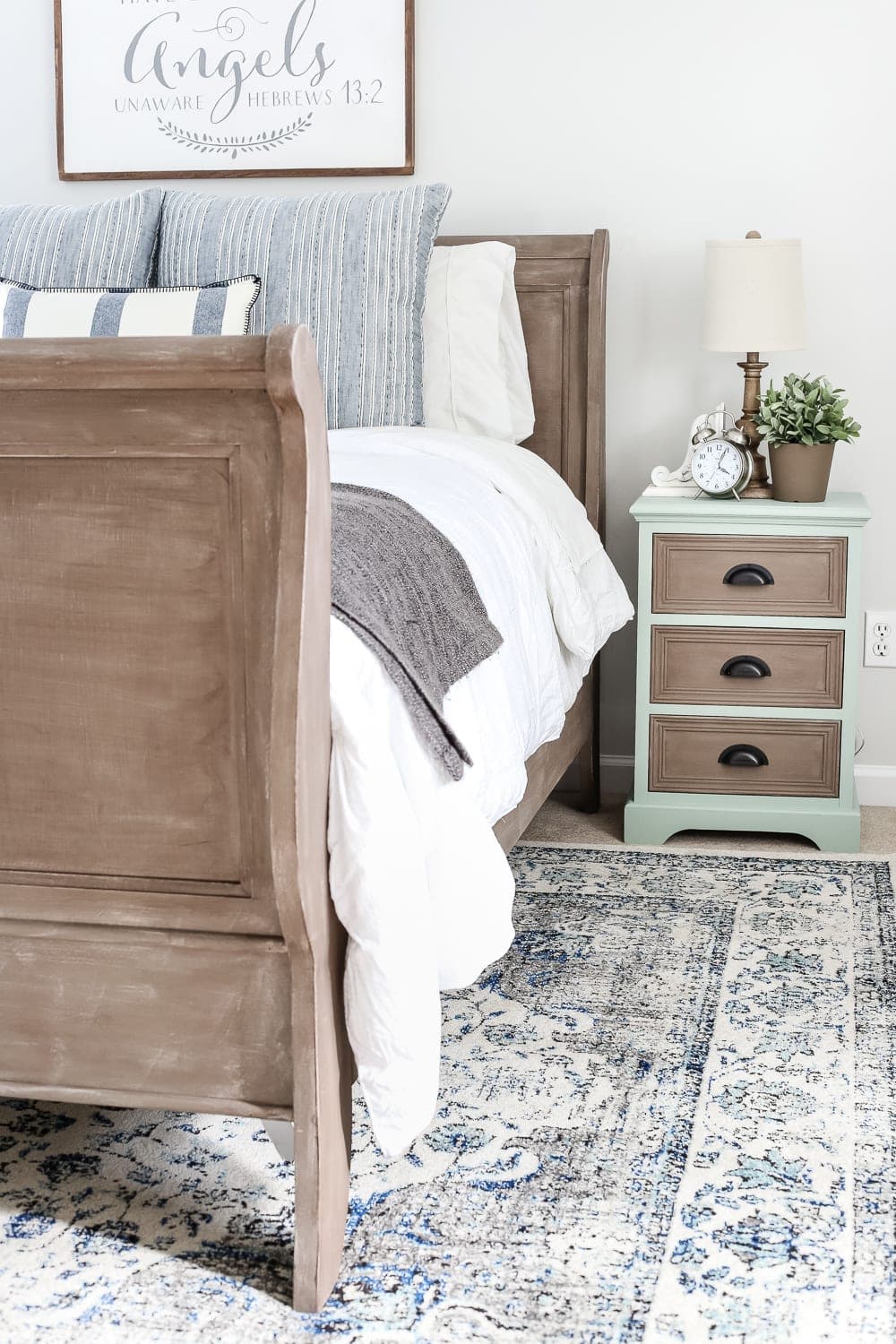 I discovered this sign perfect for a guest bedroom on an Etsy shop called Salted Words the other week too. It couldn’t be any more fitting than this. 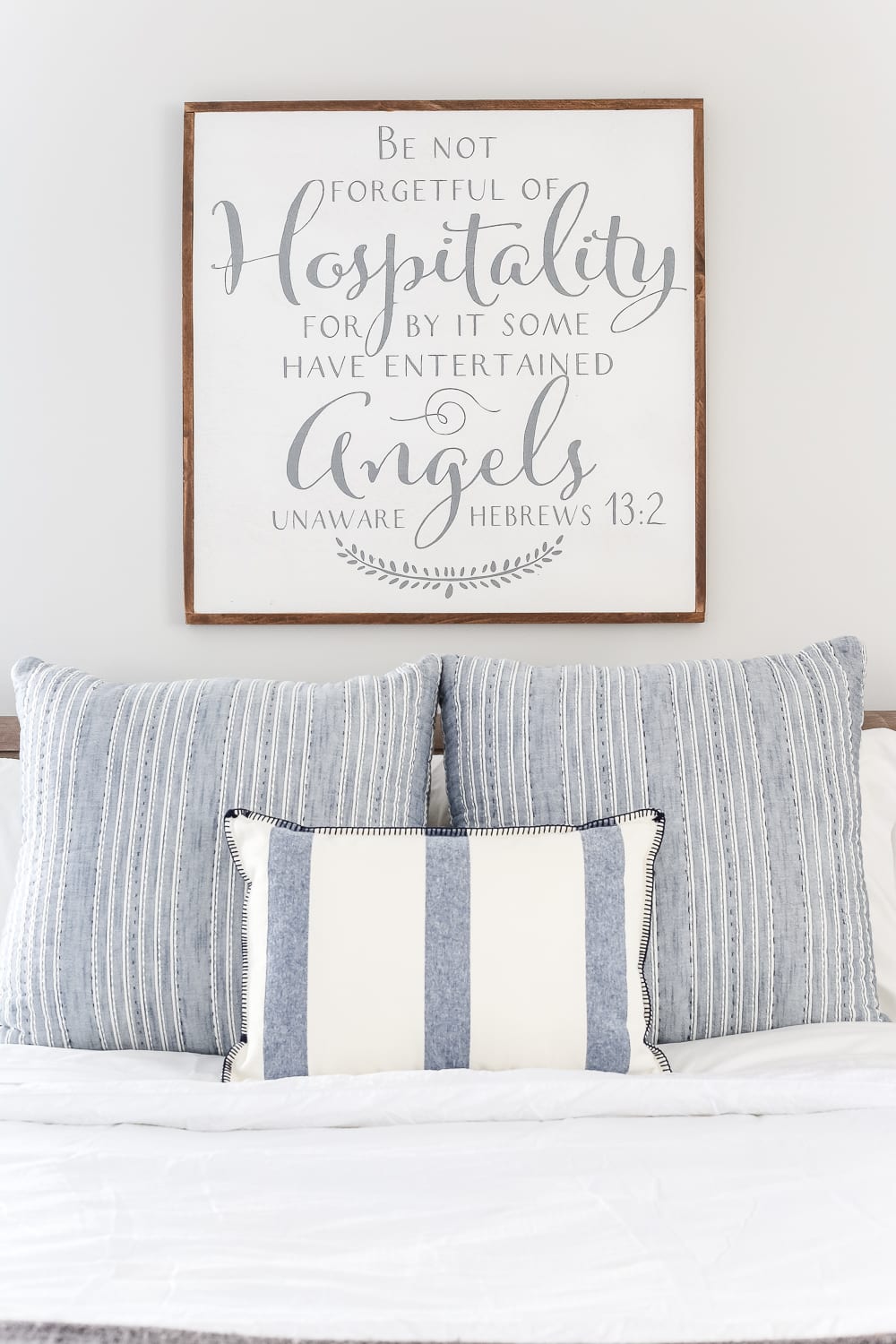 And this ceiling fan from Hunter Fan Co. works so well in here. When I ordered it, I had no idea what color of wood the blades were going to be since it’s usually so hard to tell online, but it has the perfect vintage look to it. 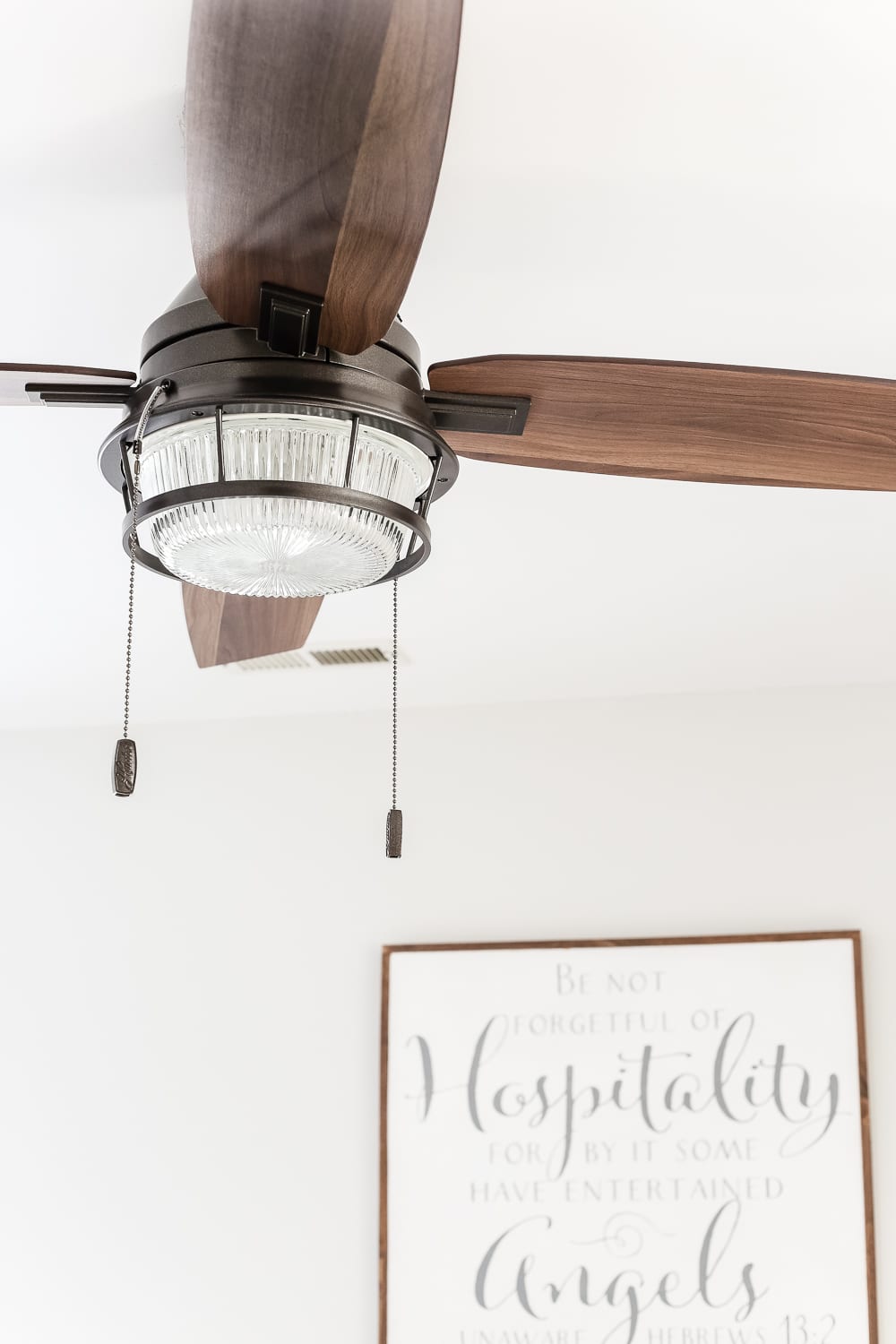 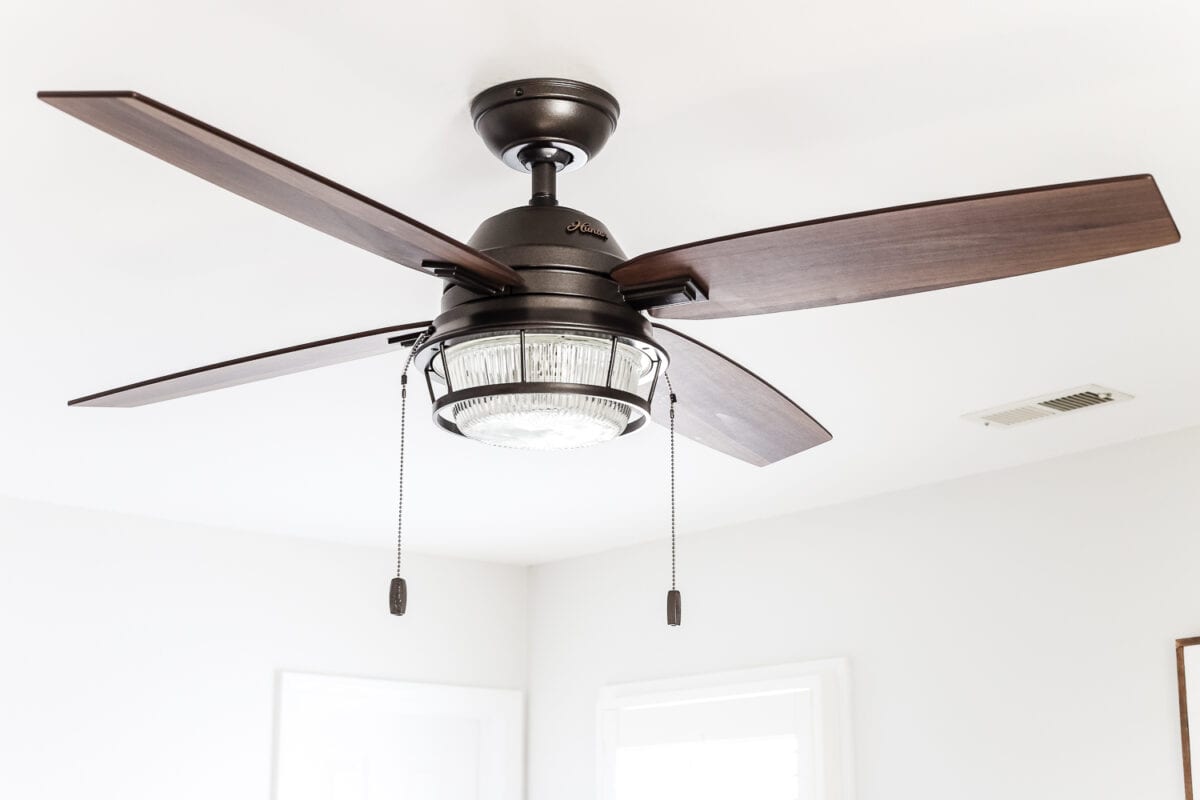 This guest bedroom has already come such a long way! I keep debating on whether or not to hang curtains in here since the window already has plantation shutters. I think I’m liking the clean and simple look though. What do you think? 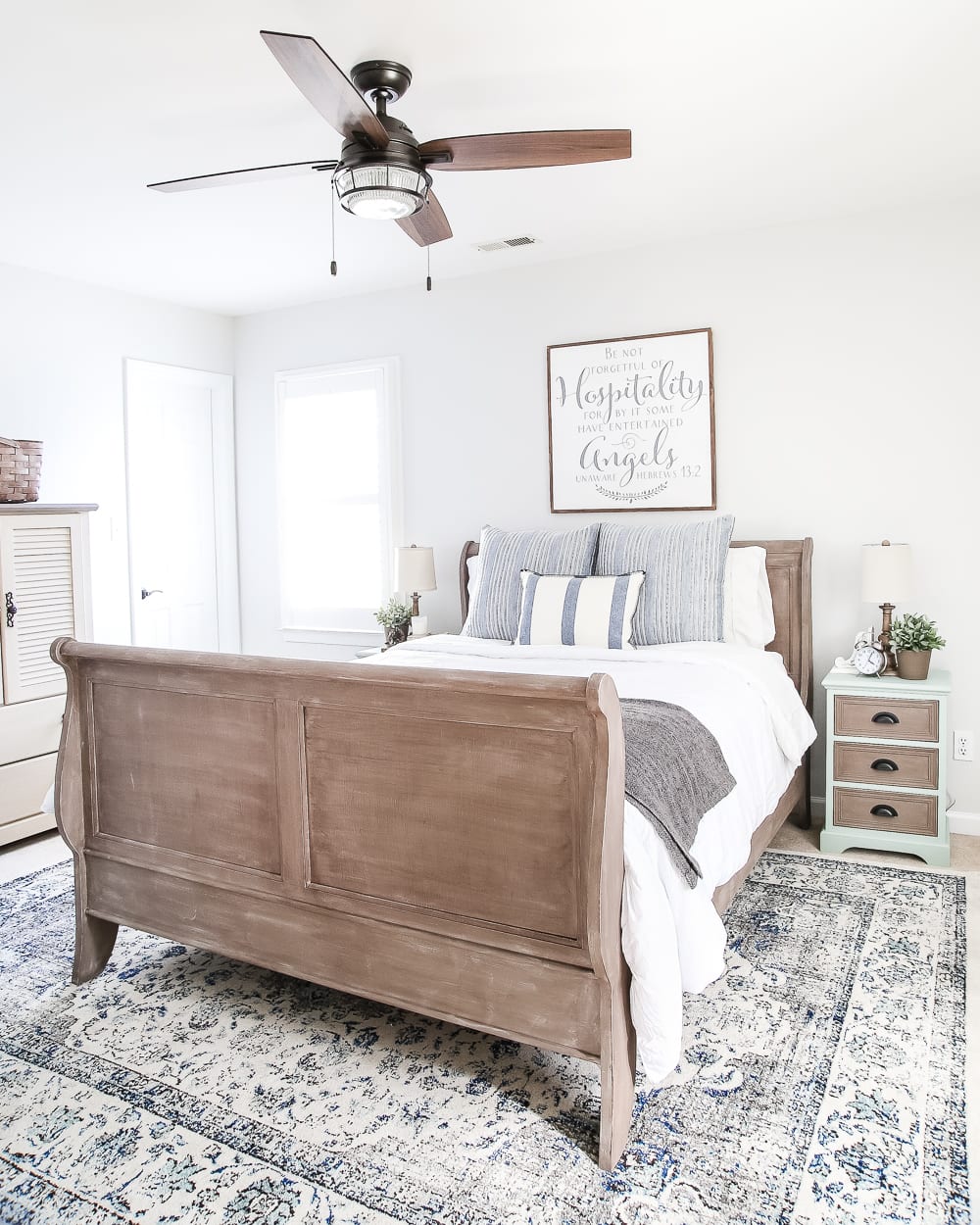 If you want to know about any of the other sources I’ve used in here so far, you can find them all here: 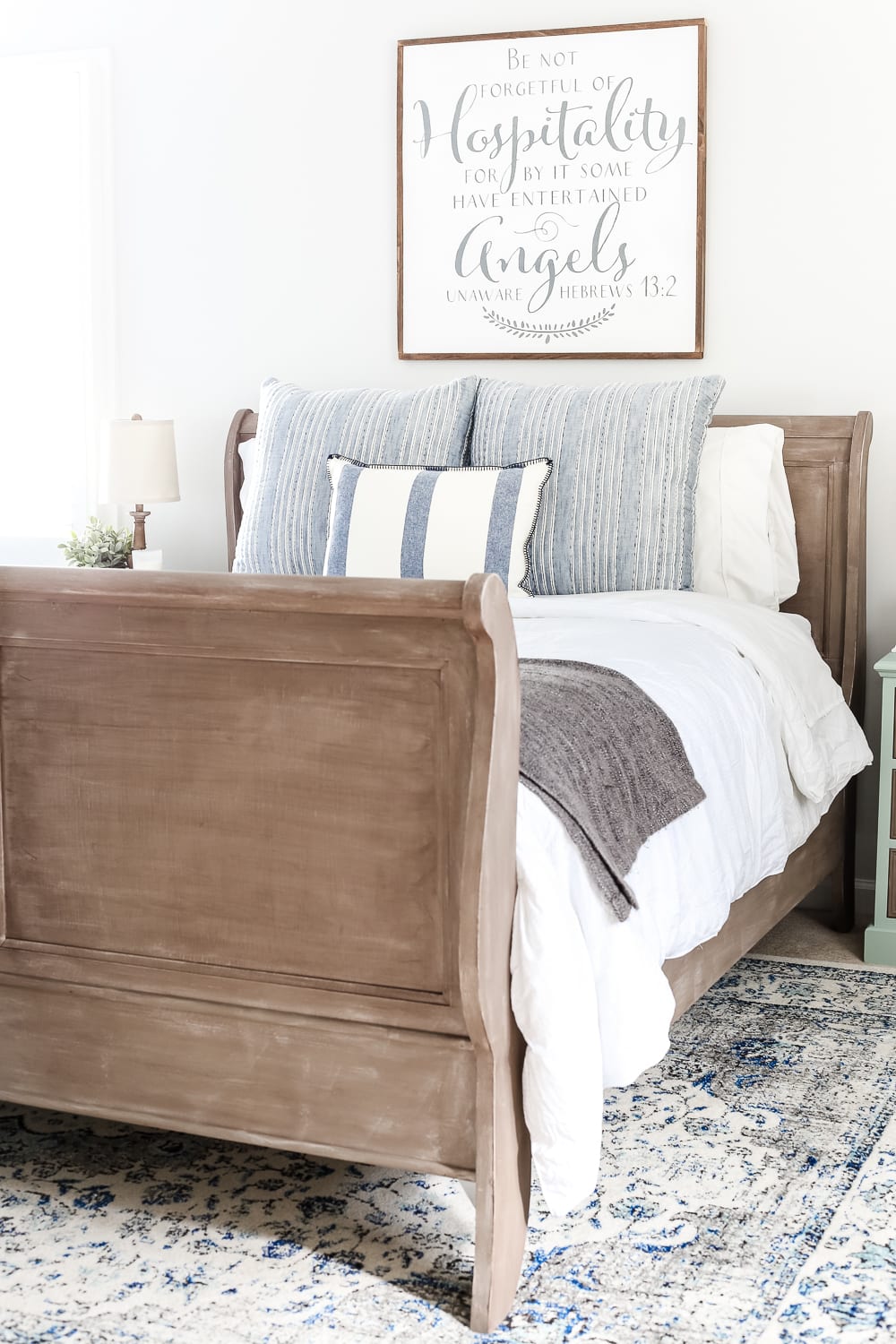 We still have this other side of the room to tackle, but it’ll be coming along soon. A little art, some pillows on the window seat, and we’ll be lookin’ good. 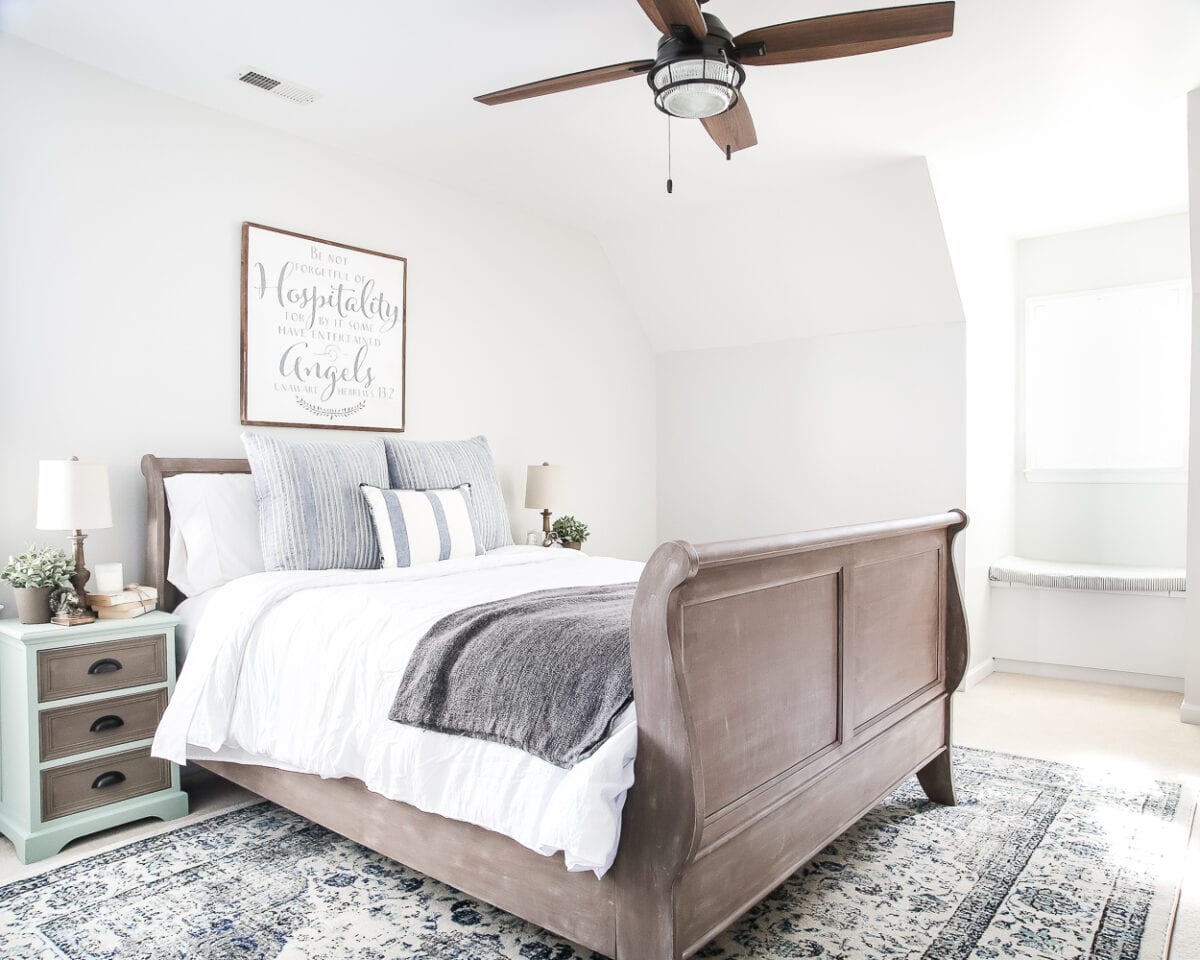 I had no idea when I first started giving this space a makeover that it would end up being my and Robert’s bedroom while we crash at my parents’ house before closing on the new place. Funny how things work out like that. 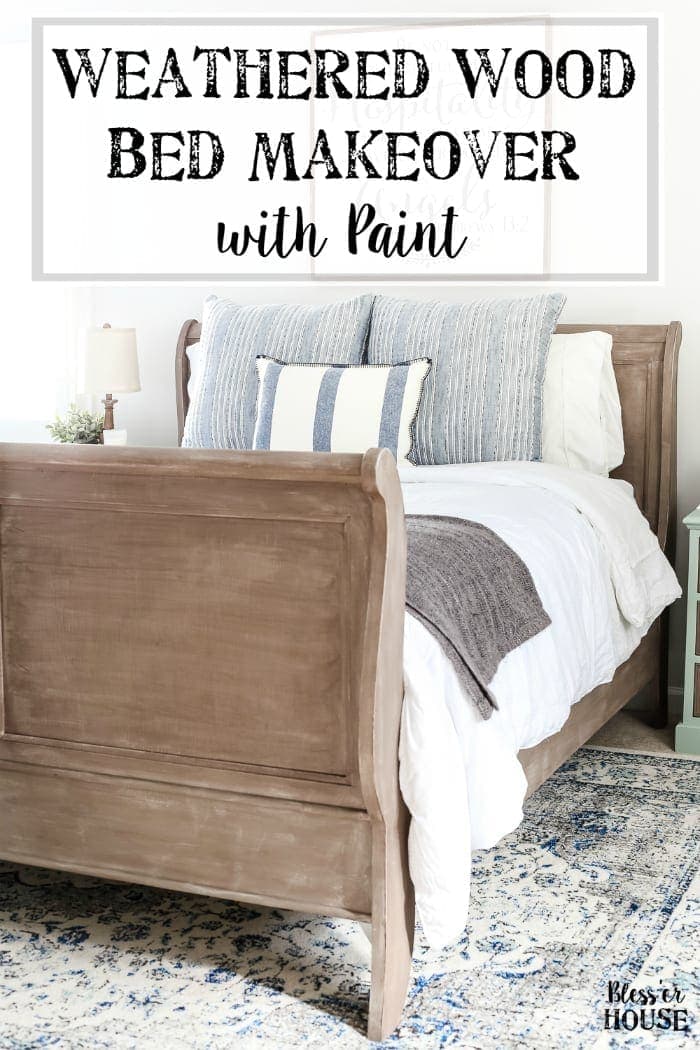 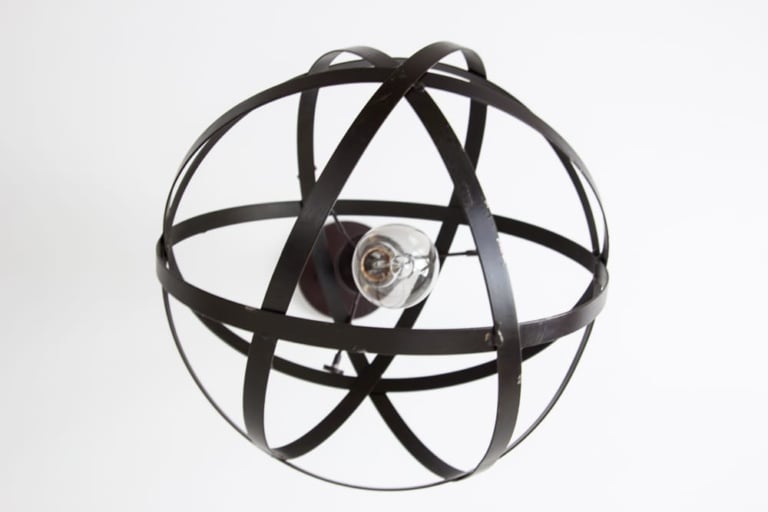 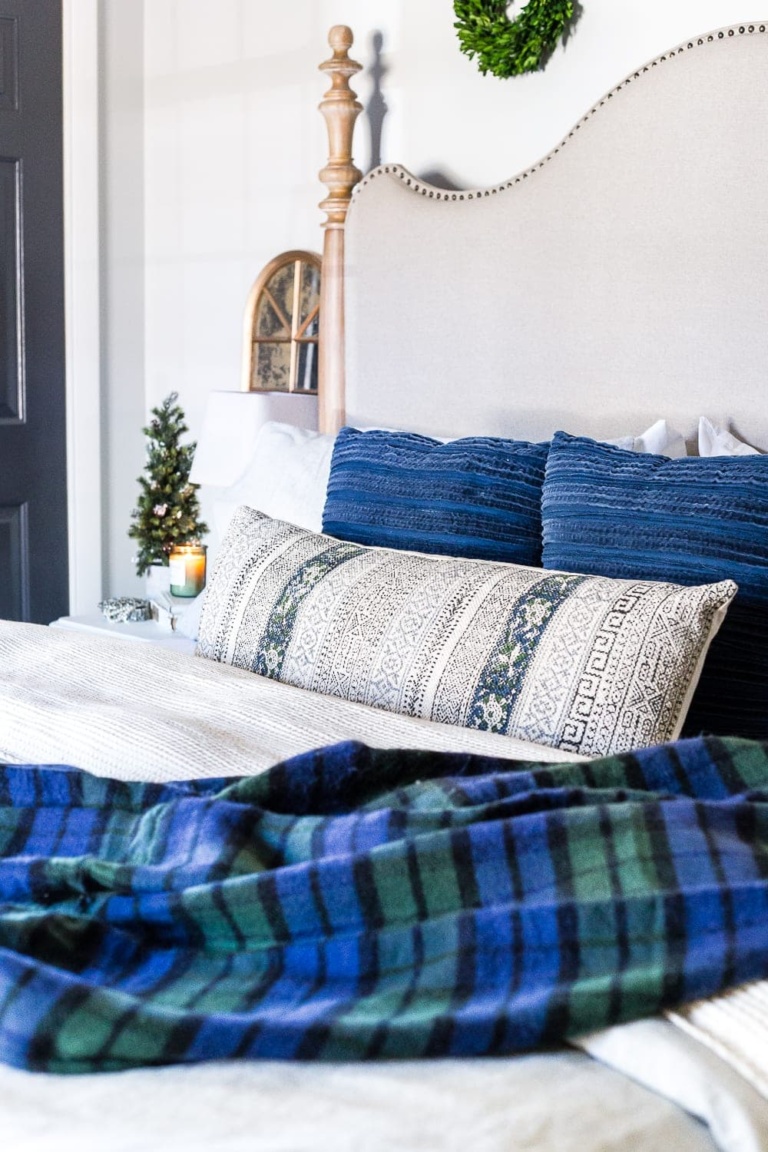 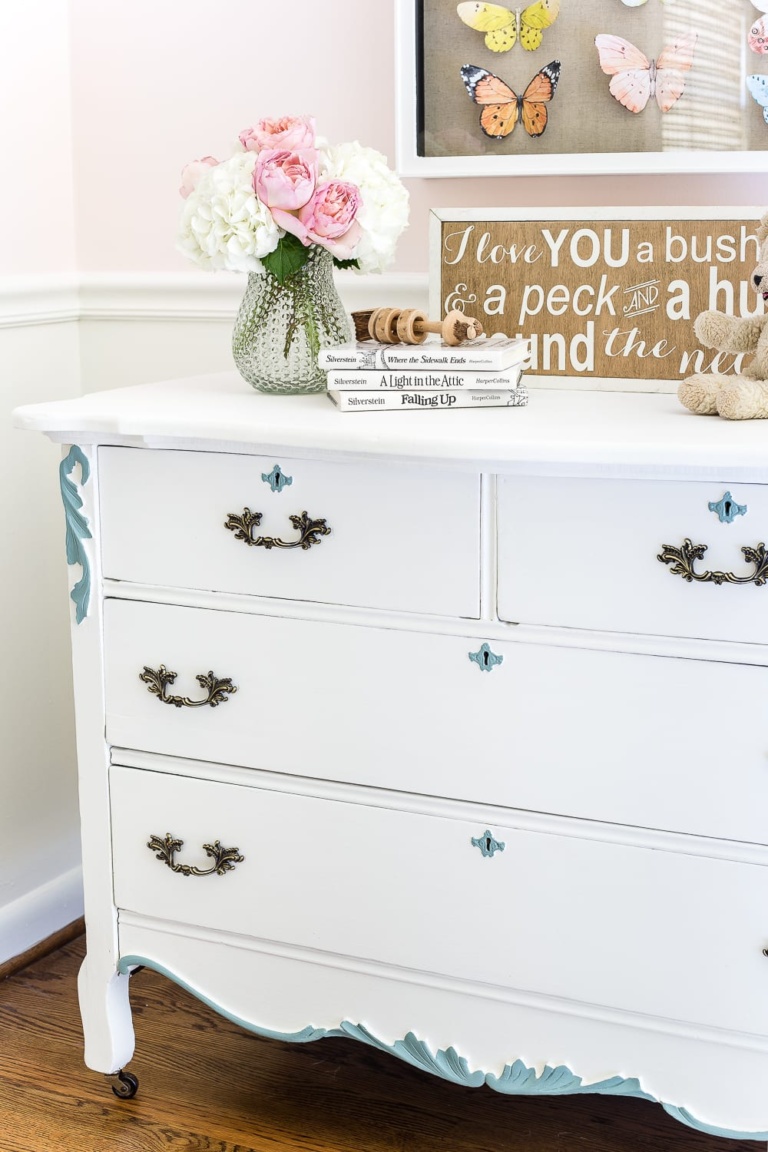 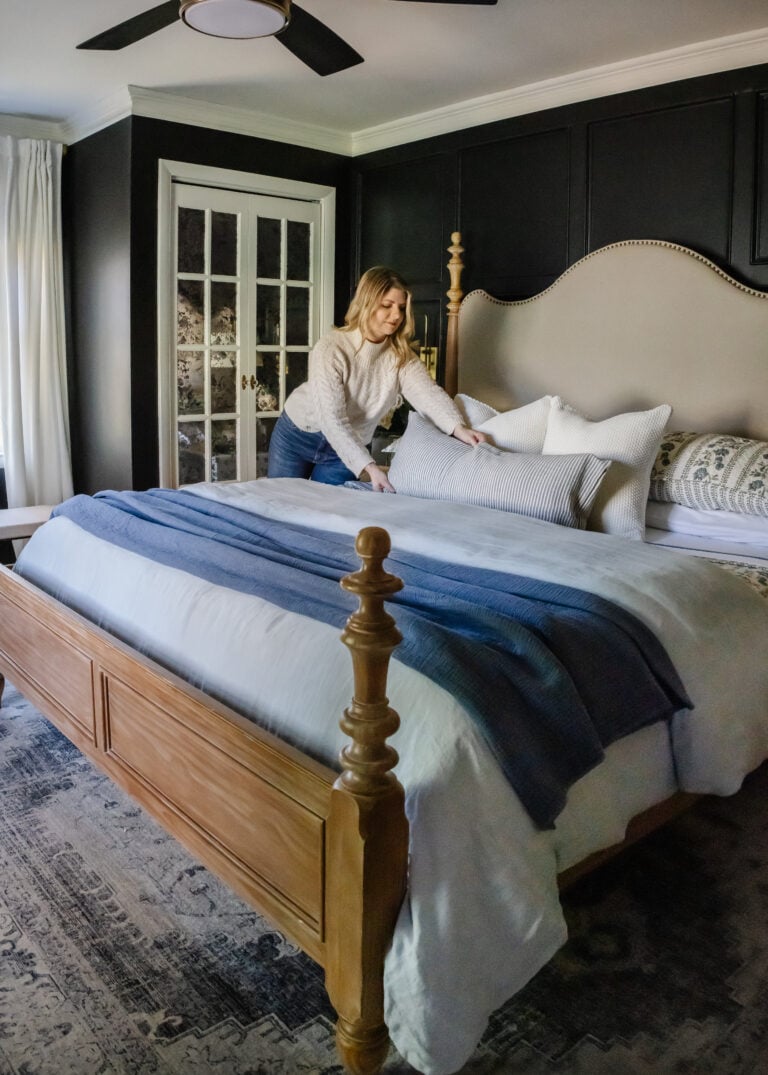 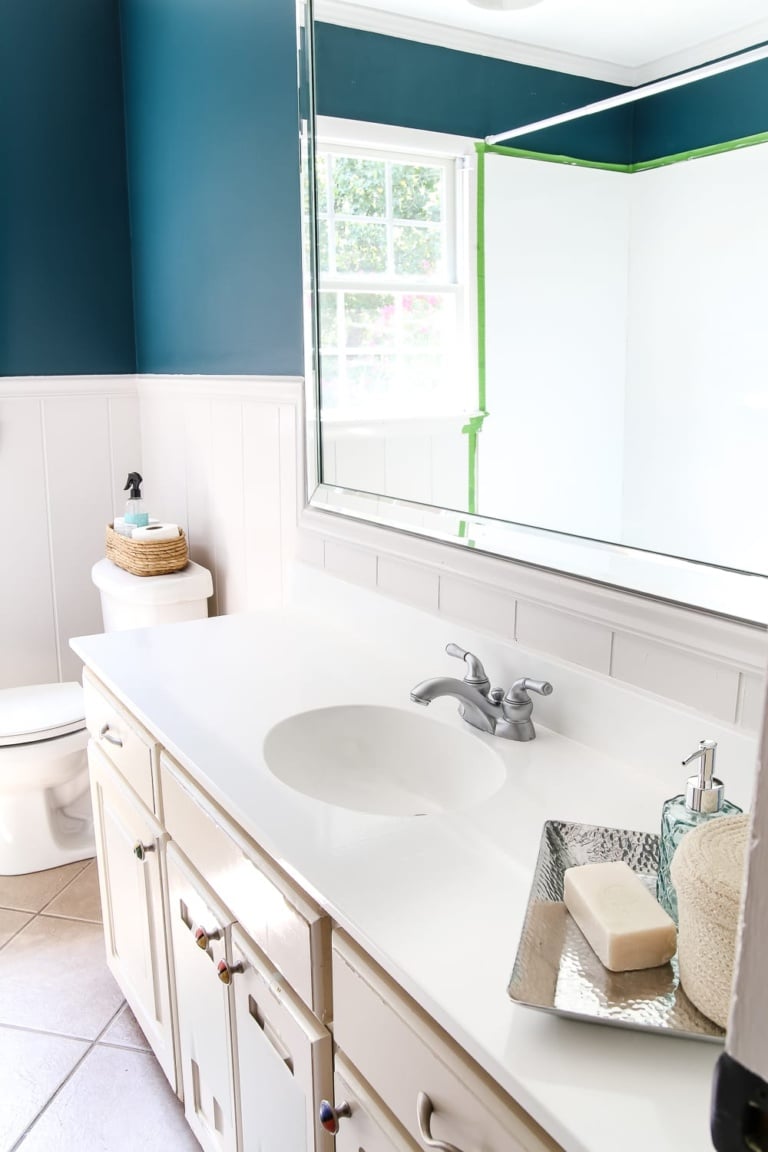