Skip to content
Not THAT kind of stripper! Ha! Got ya.

This past weekend as Robert and I soaked in every drop of glorious spring sunshine as we could, we embarked on our faux fireplace journey. If you’ve been following me for a while, you might recall my mentioning this little beauty in my post with our living room update.

When we first decided on which upgrades we wanted for the little bit of bonus money we had during the blueprint phase of our cookie cutter house, a fireplace had originally been at the top of our list. But at an upgrade cost of $5,000, we couldn’t justify the amount considering we live in South Carolina where we get only one or two snow showers per year. Out went our vision of “hanging our stockings by the chimney with care.” 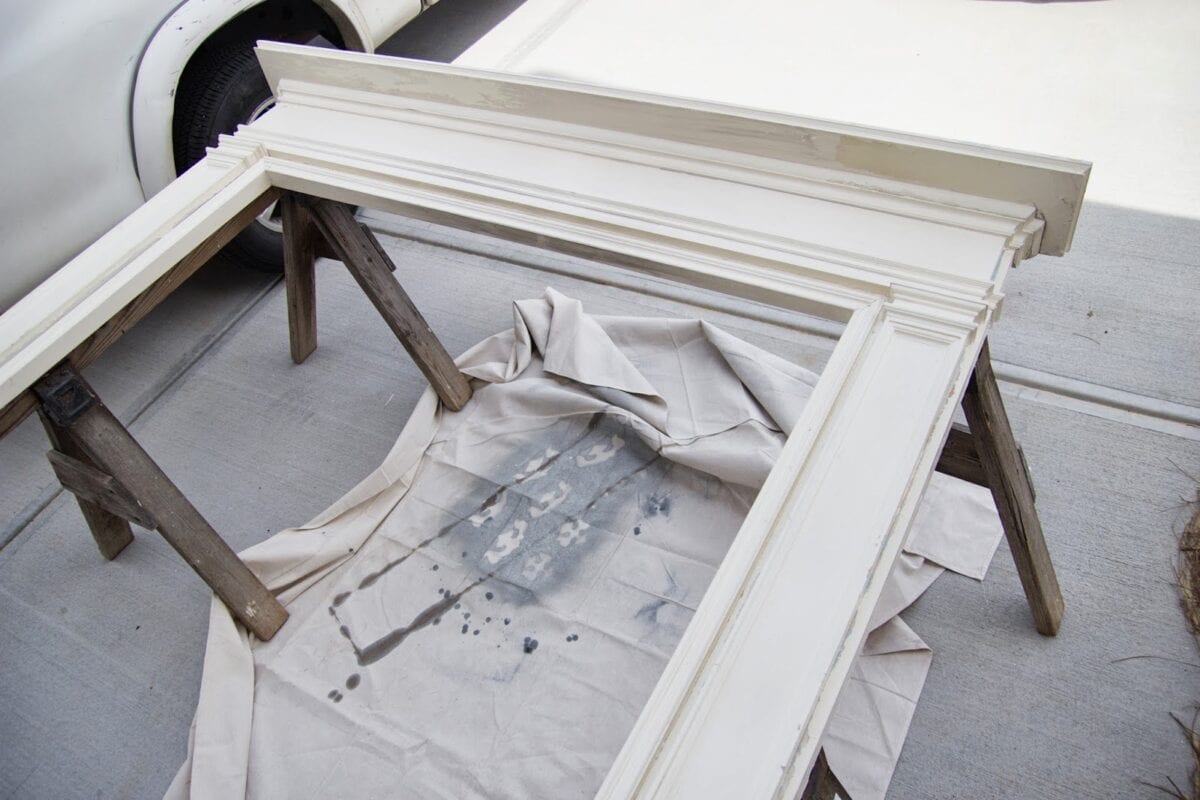 UNTIL we thought of something even better! Who says we have to have a working fire to have a fireplace mantle? After scouring every inspiration and tutorial I could find and drawing up (poorly as it may be) a plan, we will be building a faux fireplace media cabinet. I had searched on Craigslist daily for the perfect mantle, when finally this baby showed up. It is from a house built in the 1940s that was recently torn down in Charlotte but was thankfully saved by the demolitionist.
So where does the stripper come in, you ask?
Right on step one: Strip the flaky, yellowing old paint to get a nice, clean slate.
After reading up on several success stories and many failed paint-stripping attempts, the general consensus for the best paint stripper seemed to be Citristrip. I decided to give it a whirl. 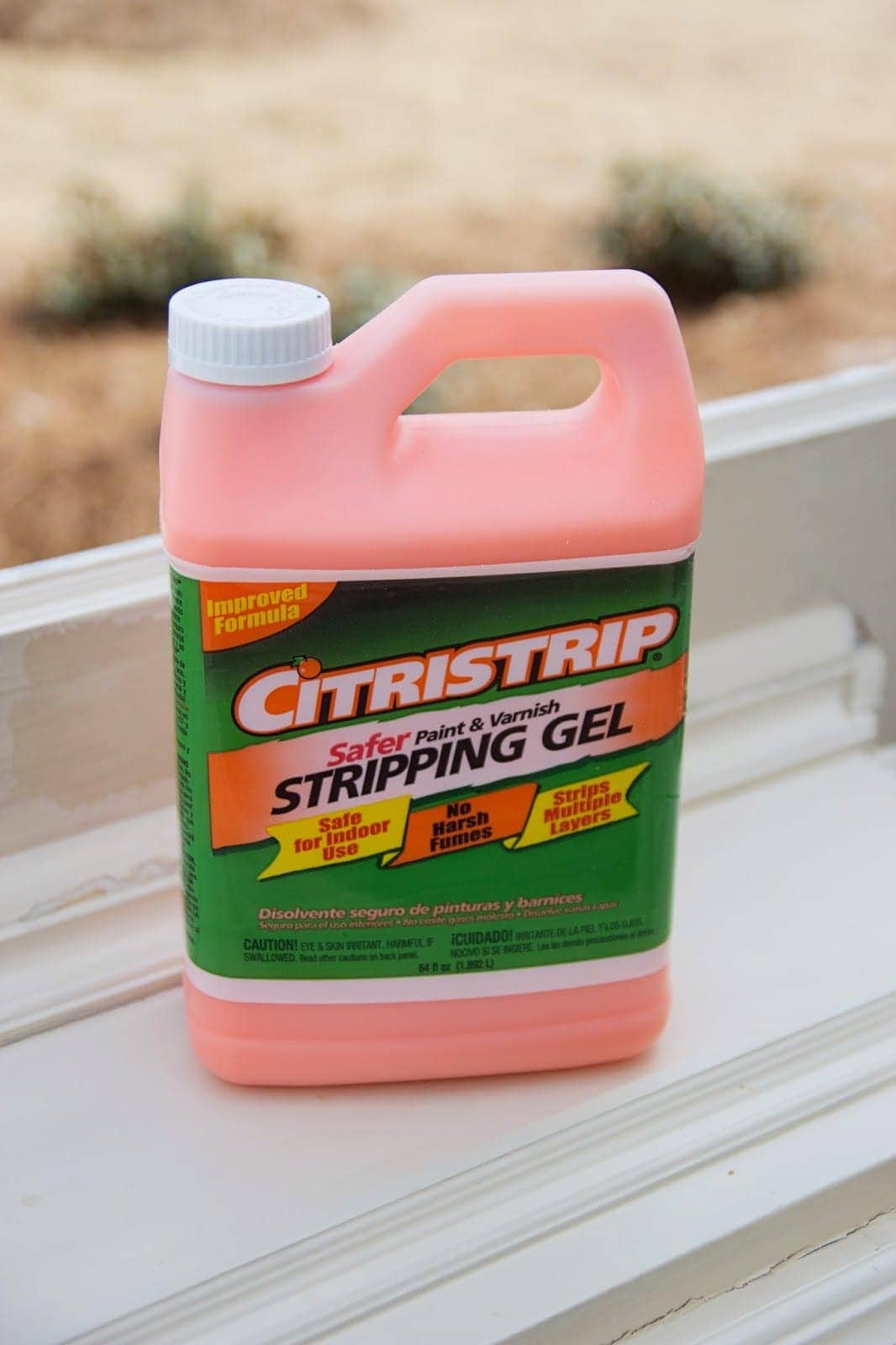 I was a bit apprehensive at first since this stuff surprisingly smelled nice, like oranges. But trust me. This stuff WORKS! Robert swiped on a thick layer of the Citristrip, and we let it work its magic for an hour or two. 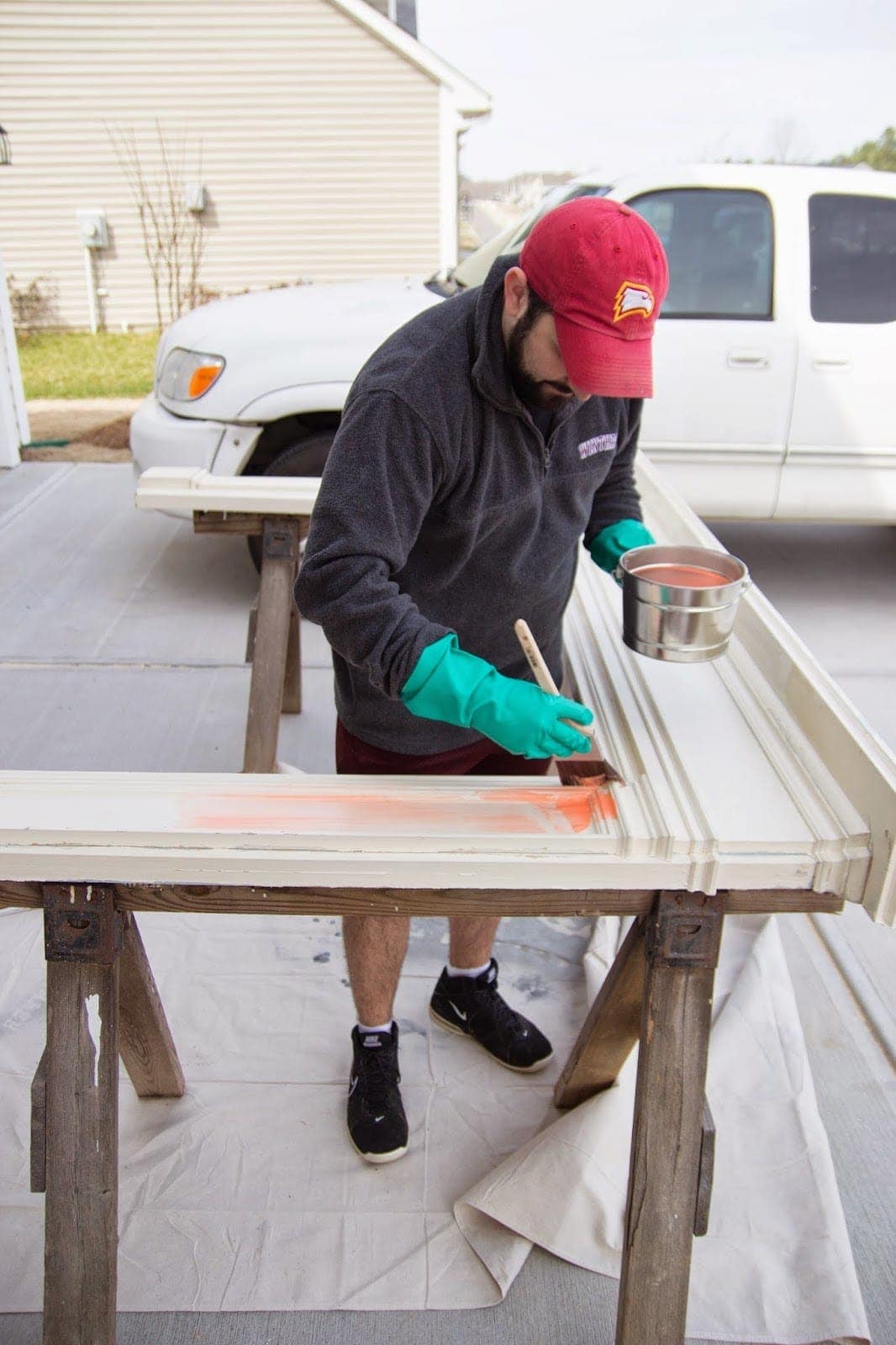 After only 30 minutes, the paint was already bubbling up. 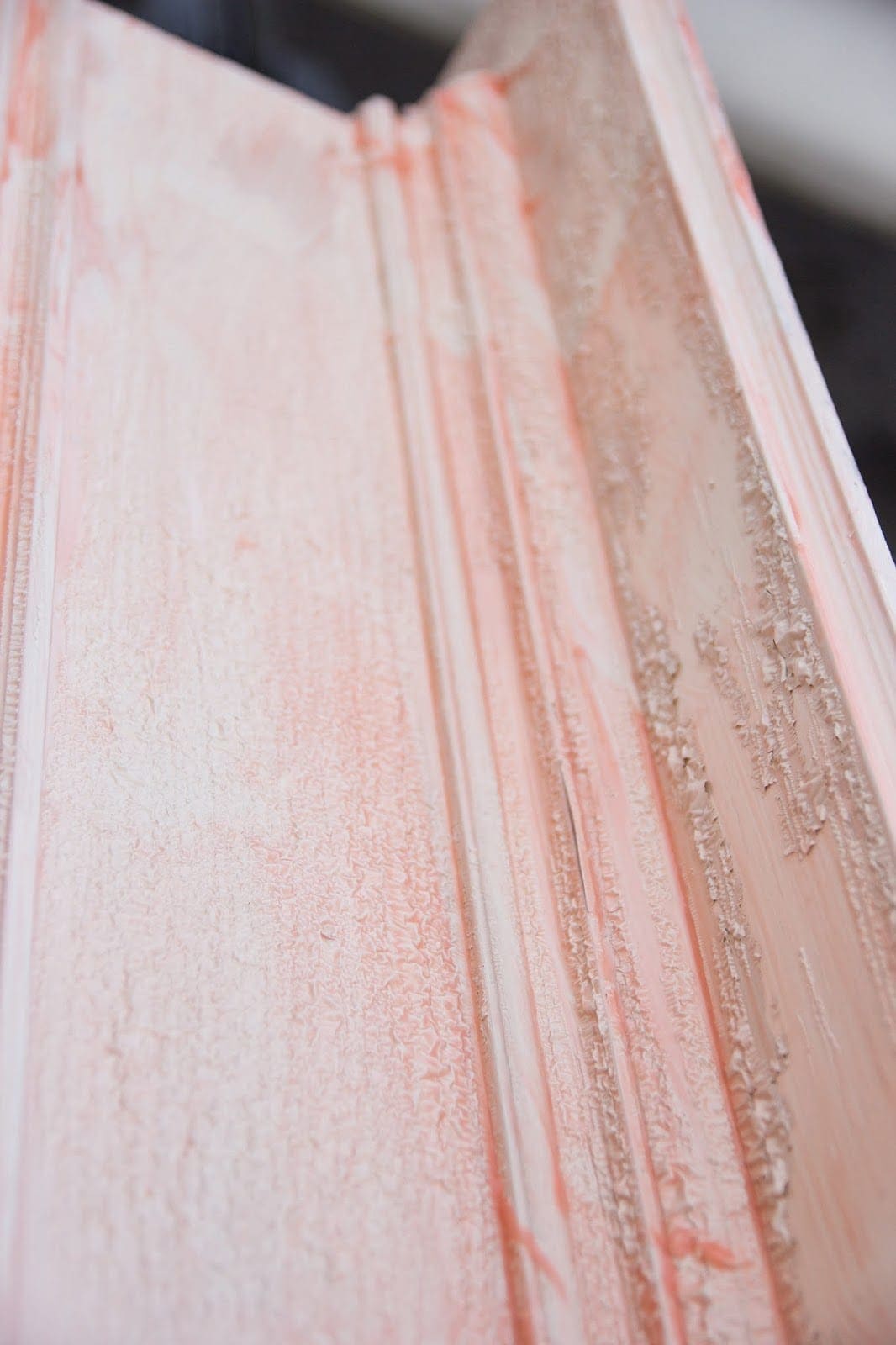 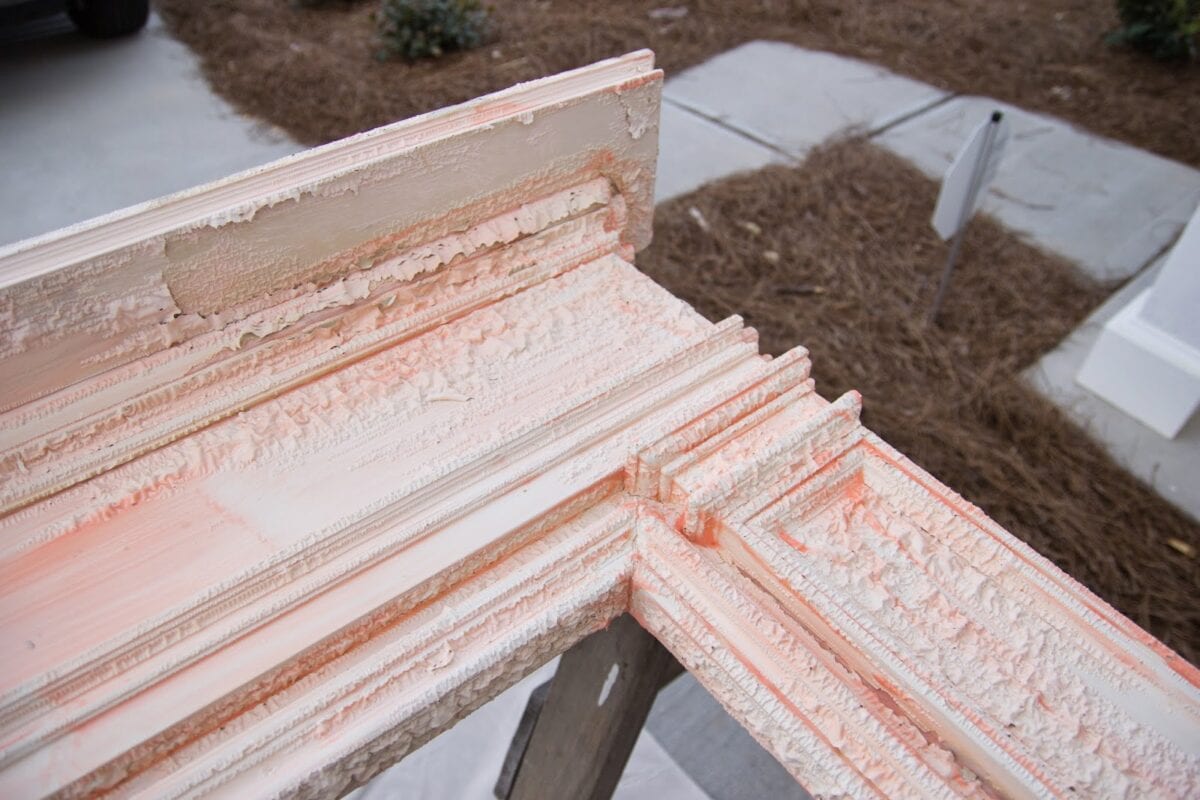 So with my lovely cleaning-lady-like gloves, I grabbed a scraper and went at it. 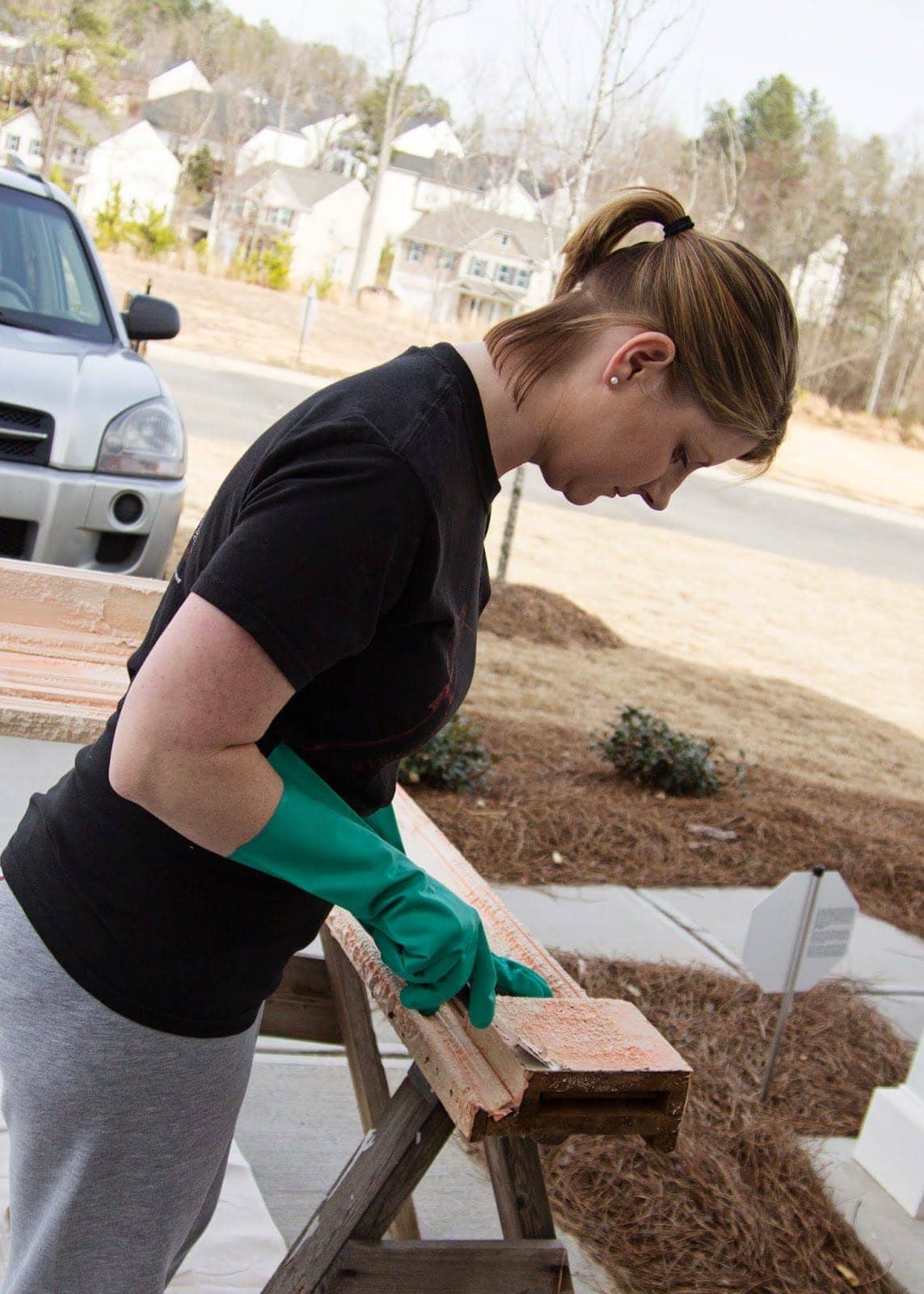 Sorry for the blurry photo, but hopefully you can tell, the paint came up like butter. 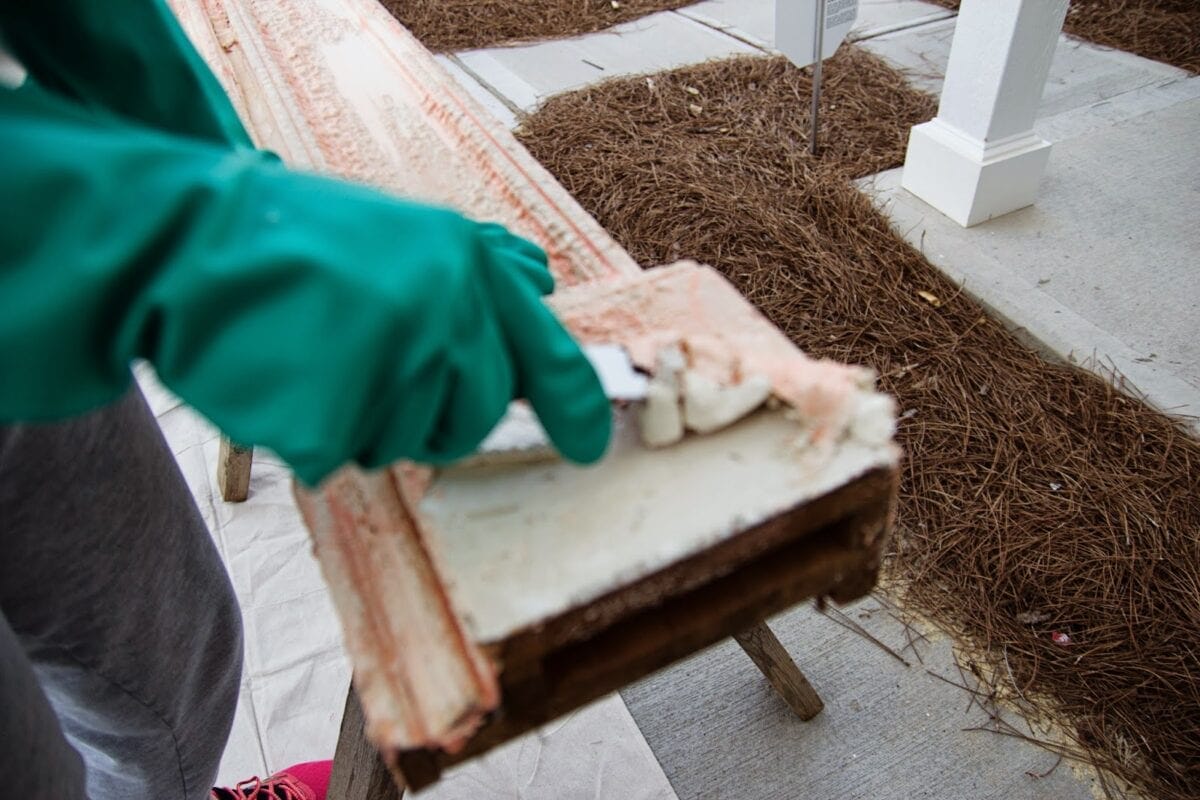 The nooks and crannies were a little tougher, so we used small wire brushes for those sections. In hindsight, we really should have worn masks. That was a dumb move on our part, and probably a safety issue. 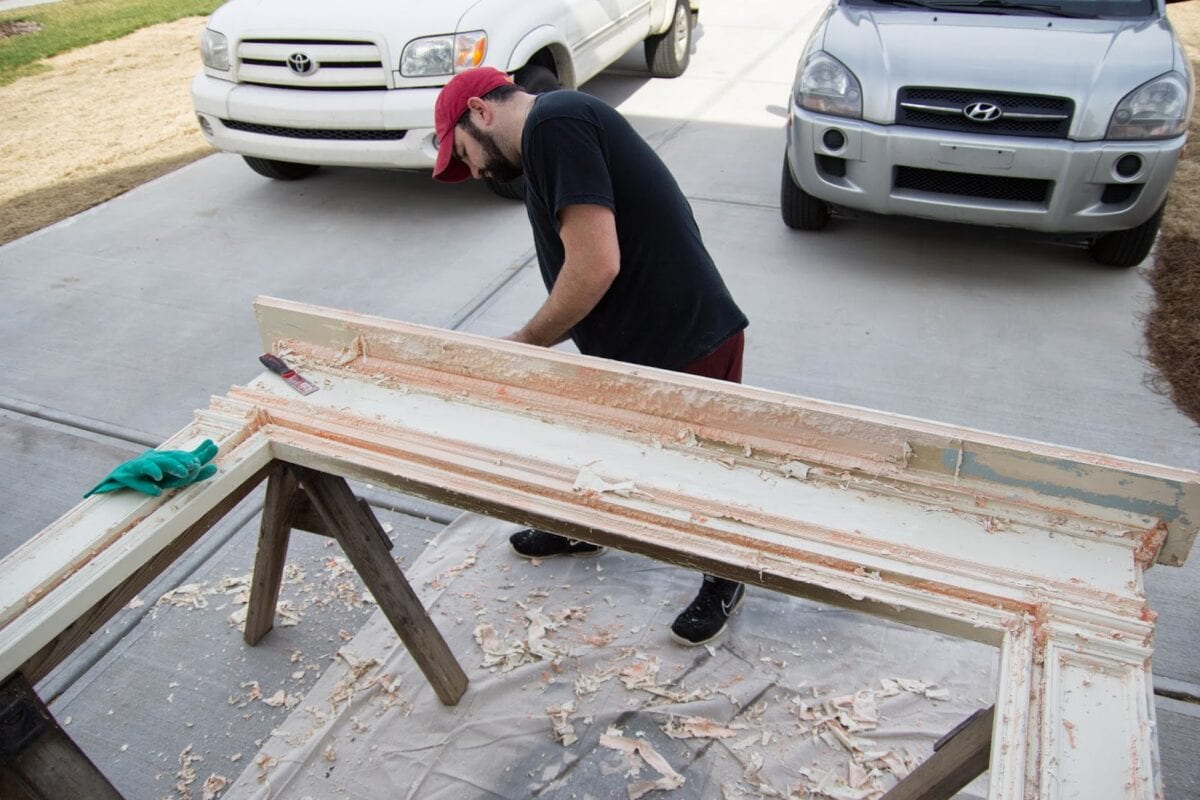 It still looks blotchy as this thing had several layers of paint, but it now has a smooth, non-flaky finish and that’s what really matters. 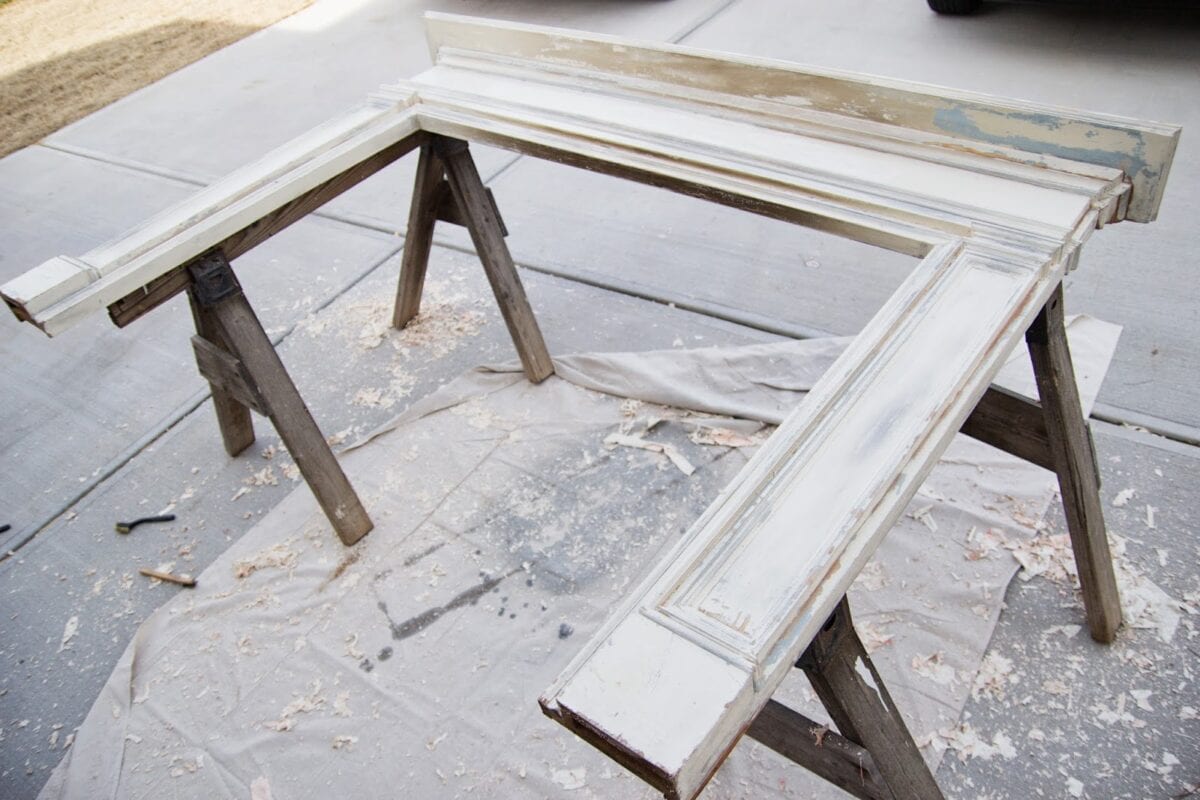 Apparently its previous owner painted it blue at one point? It actually looks kind of cool all distressed like this, but we will eventually be painting it a pure white with a satin finish. 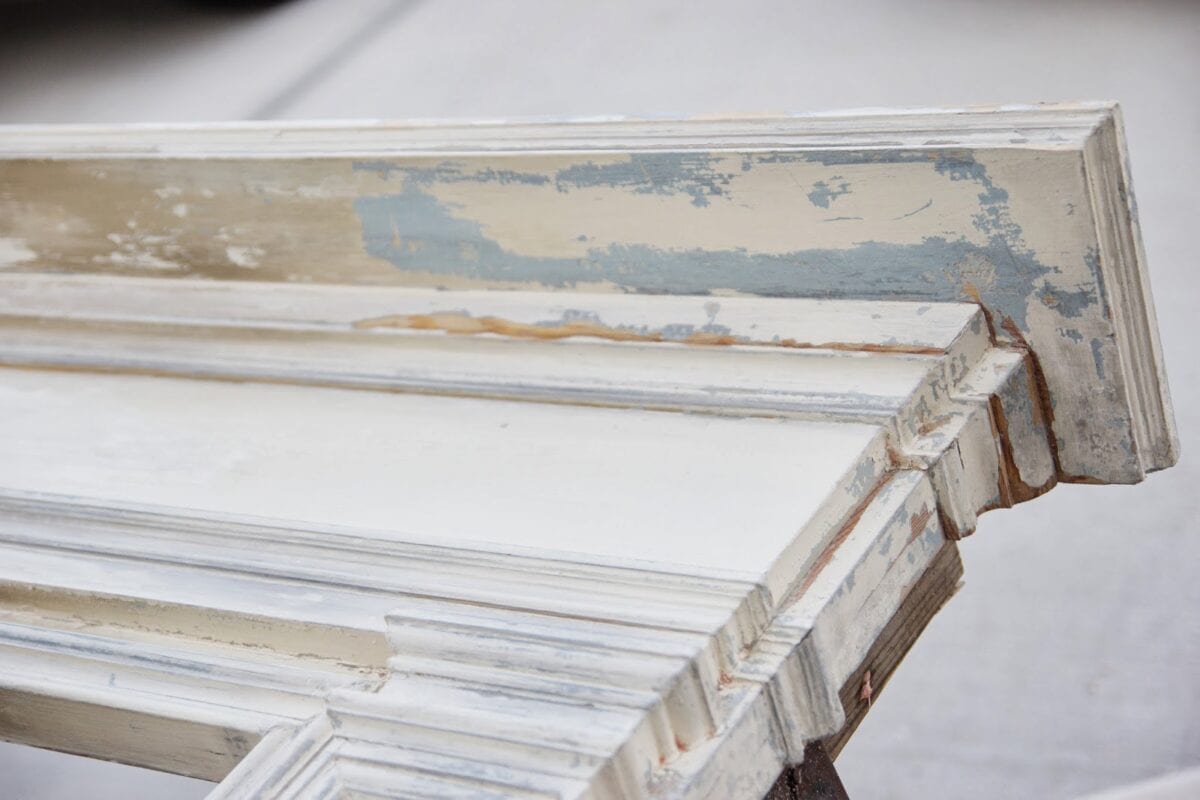 Once the painting is finished, we will be building a shallow shelf behind it, just deep enough to hold DVDs (maybe one day when DVDs become obsolete as they are slowly being phased out, it can just hold books or board games). It will also have a faux stacked-log door to make it a cabinet. I don’t want to reveal too much just yet, but if its anything like the vision in my head, it’s going to be spectacular. 🙂
3 shares 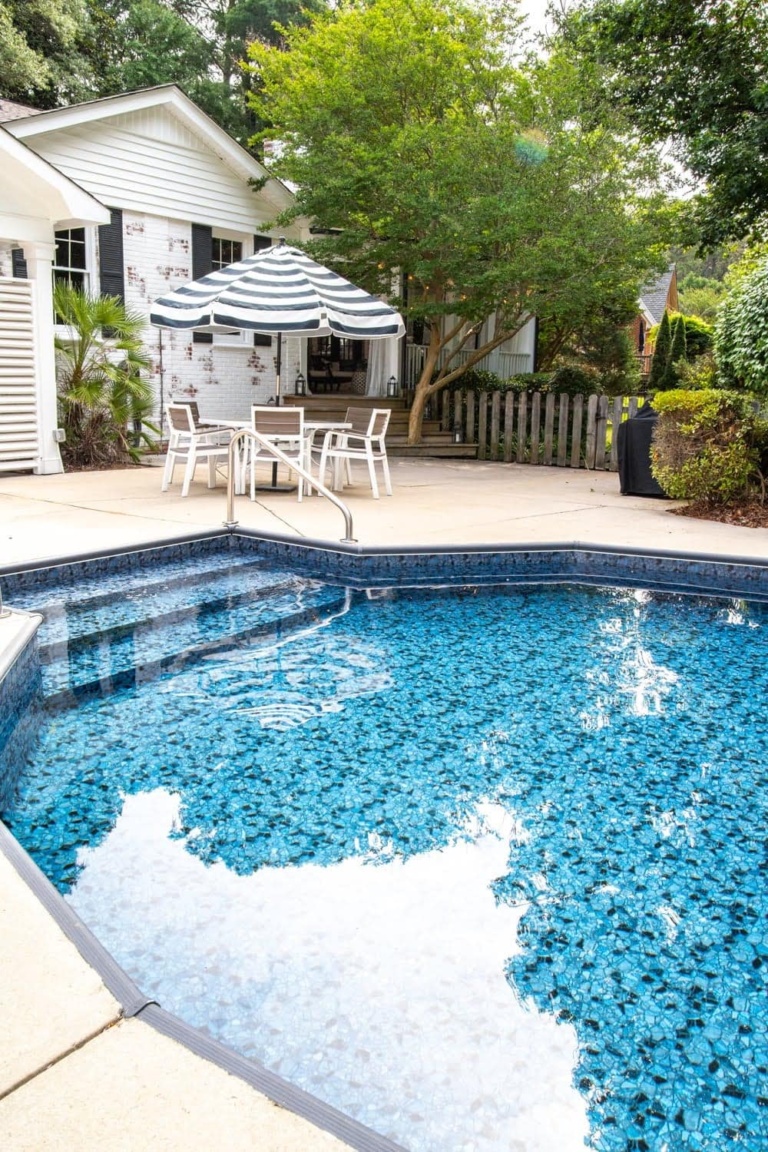 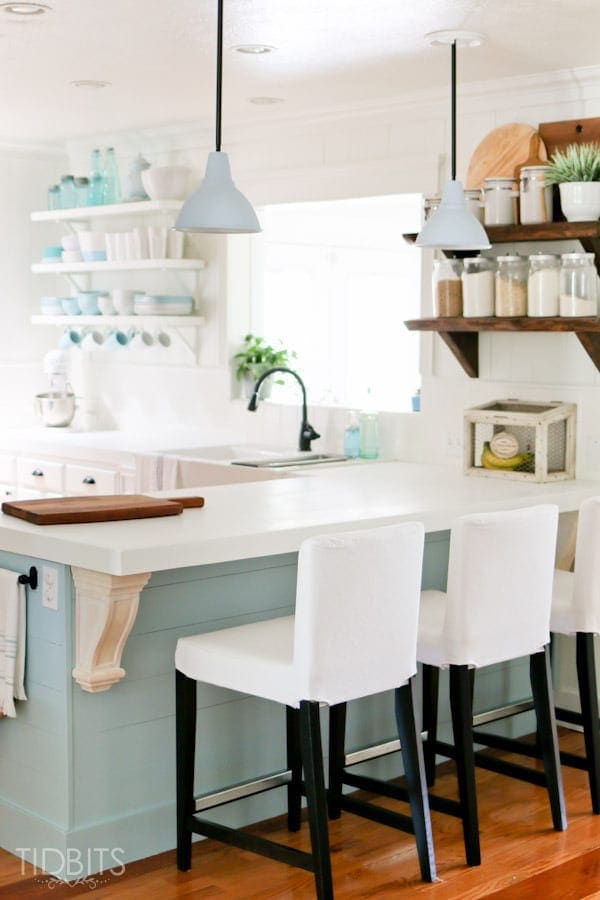 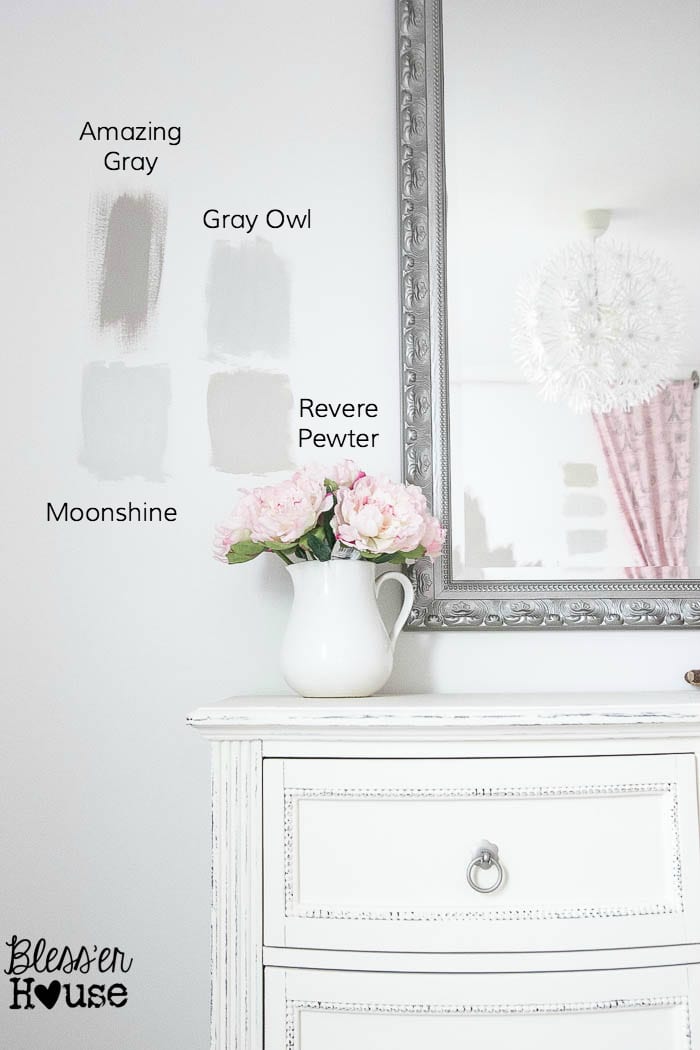 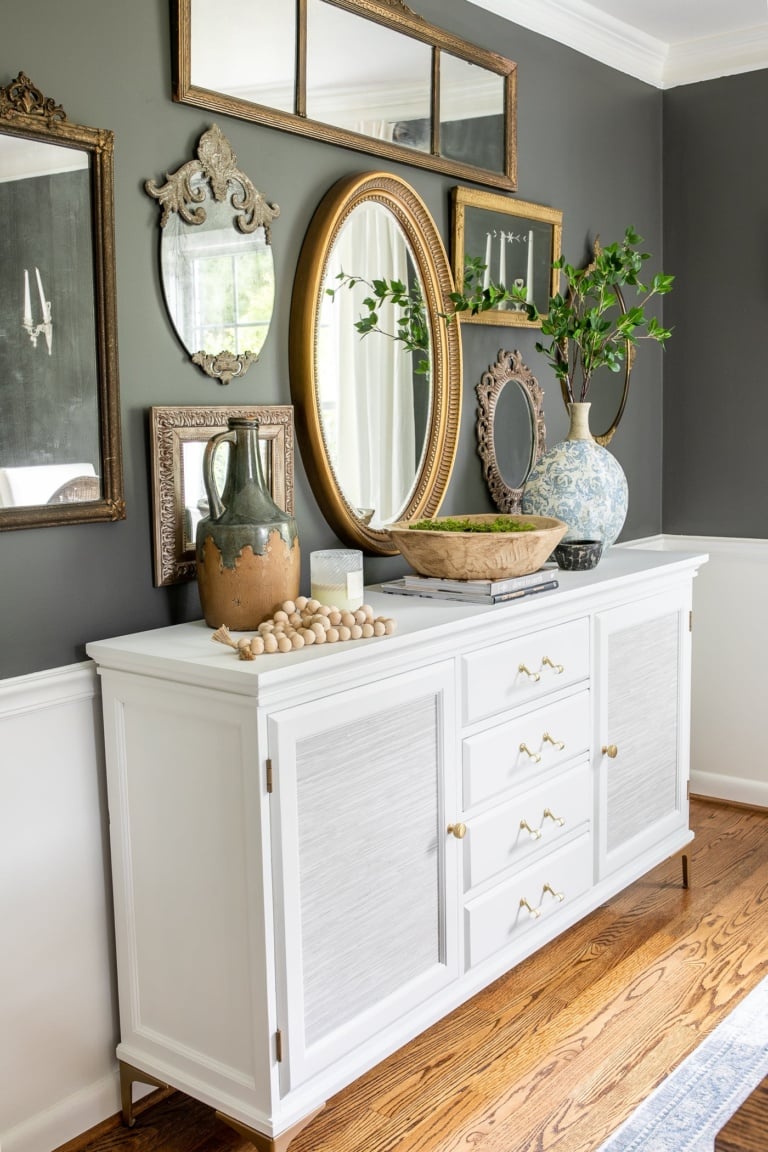 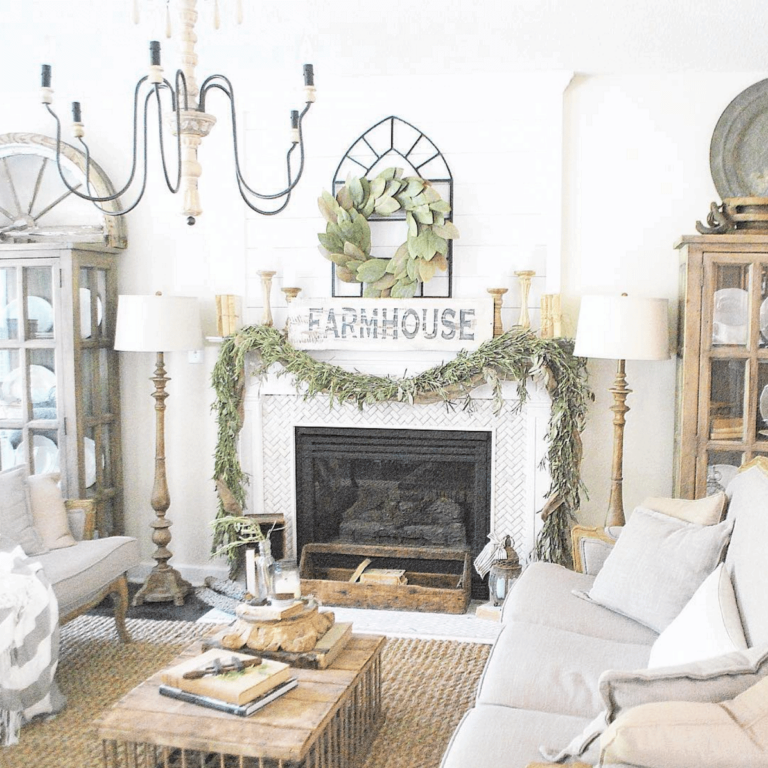