A non-biased review of the new IKEA sofa lines Farlov and Stocksund- how comfortable they are, if they’re worth the price, and how to keep them clean.

Somewhere between 2009 and now, IKEA grew up and graduated from college. I saw an article on Martha Stewart’s page while I was scrolling aimlessly on Facebook recently that said no one over the age of 30 should own anything from IKEA. And I scoffed. Like about choked on my popcorn scoffed.

Because as much as I love Martha Stewart (especially when she’s paired up with Snoop Dogg in a crafting challenge), I have to disagree with her. If our recent big IKEA purchase is wrong, then I don’t wanna be right. 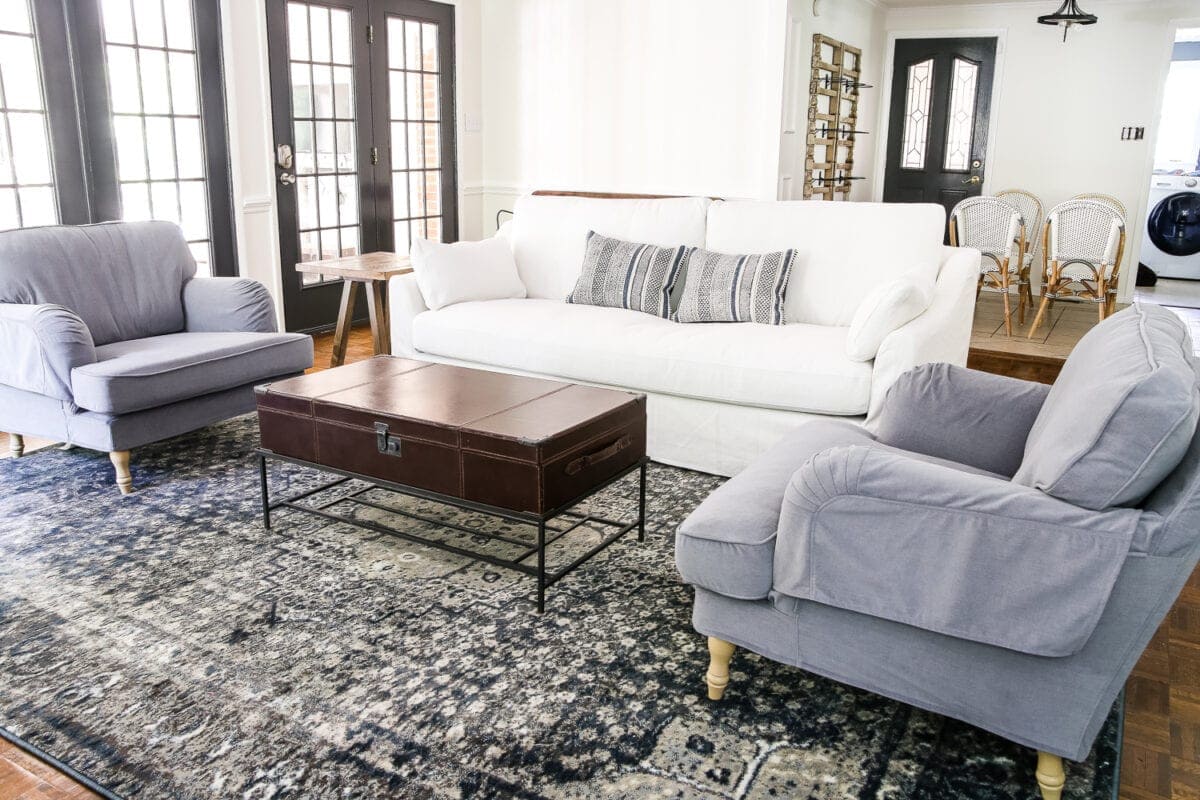 I’ve mentioned before how much I love slipcovered couches with a preschooler and a messy mutt running around. We ended up with the IKEA Ektorp in our playroom last fall. And when I saw IKEA released a few new sofa and chair designs this spring, I knew they would be perfect in the new house. They looked so tailored and elegant and not at all frumpy like some of the other slipcovered pieces I’ve seen.

For the new living room, after several visits to my nearest store for sit tests to really know for sure if this was the route we wanted to take, we picked the Farlov sofa and Stocksund accent chairs. So far I’m in love, which completely explains that sofa’s name in my non-Swedish-speaking brain. (This post isn’t sponsored by IKEA and these aren’t affiliate links. I just like passing along great info when I find it, in hopes that it will help you.) 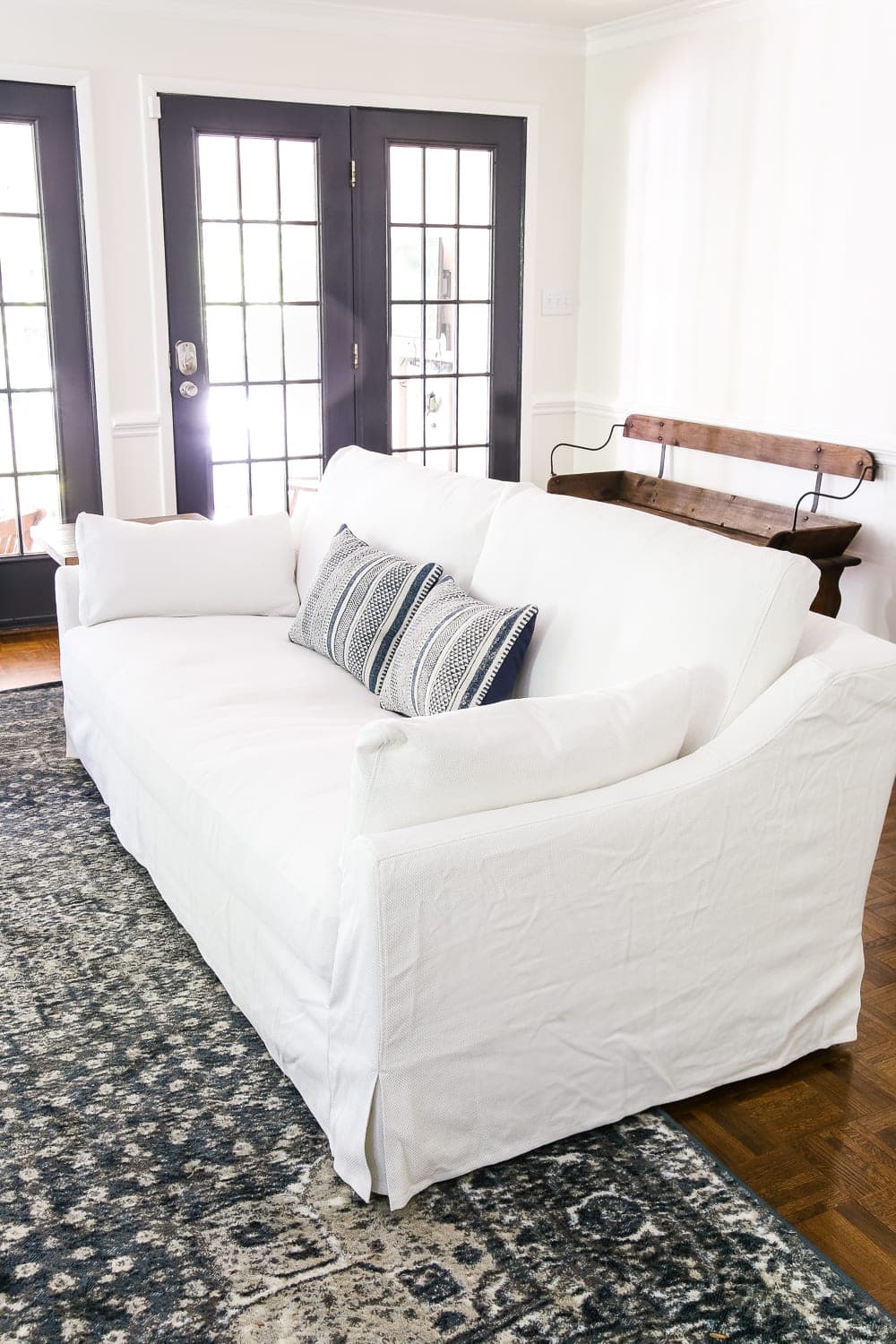 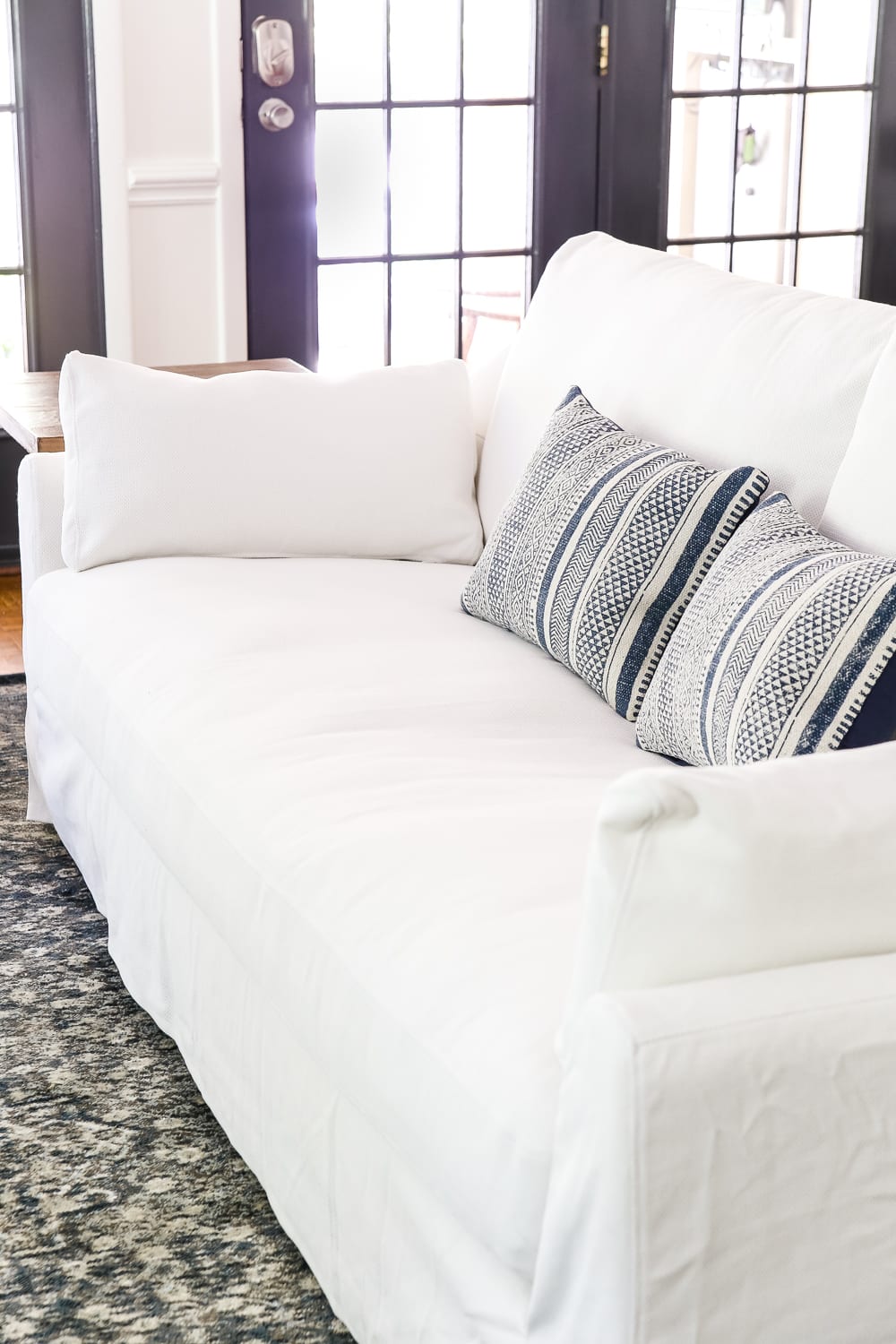 The Farlov only comes in two colors so far, white and beige, but I’m hoping they’ll make more colors of slipcovers later on so we can change things up for relatively inexpensively if we ever want a different look or something darker in the winter. It is very very deep, almost like a twin-sized bed. My feet don’t touch the floor when I sit back in it, so it’s going to be great for snuggling up with the whole family for movie nights in our house. 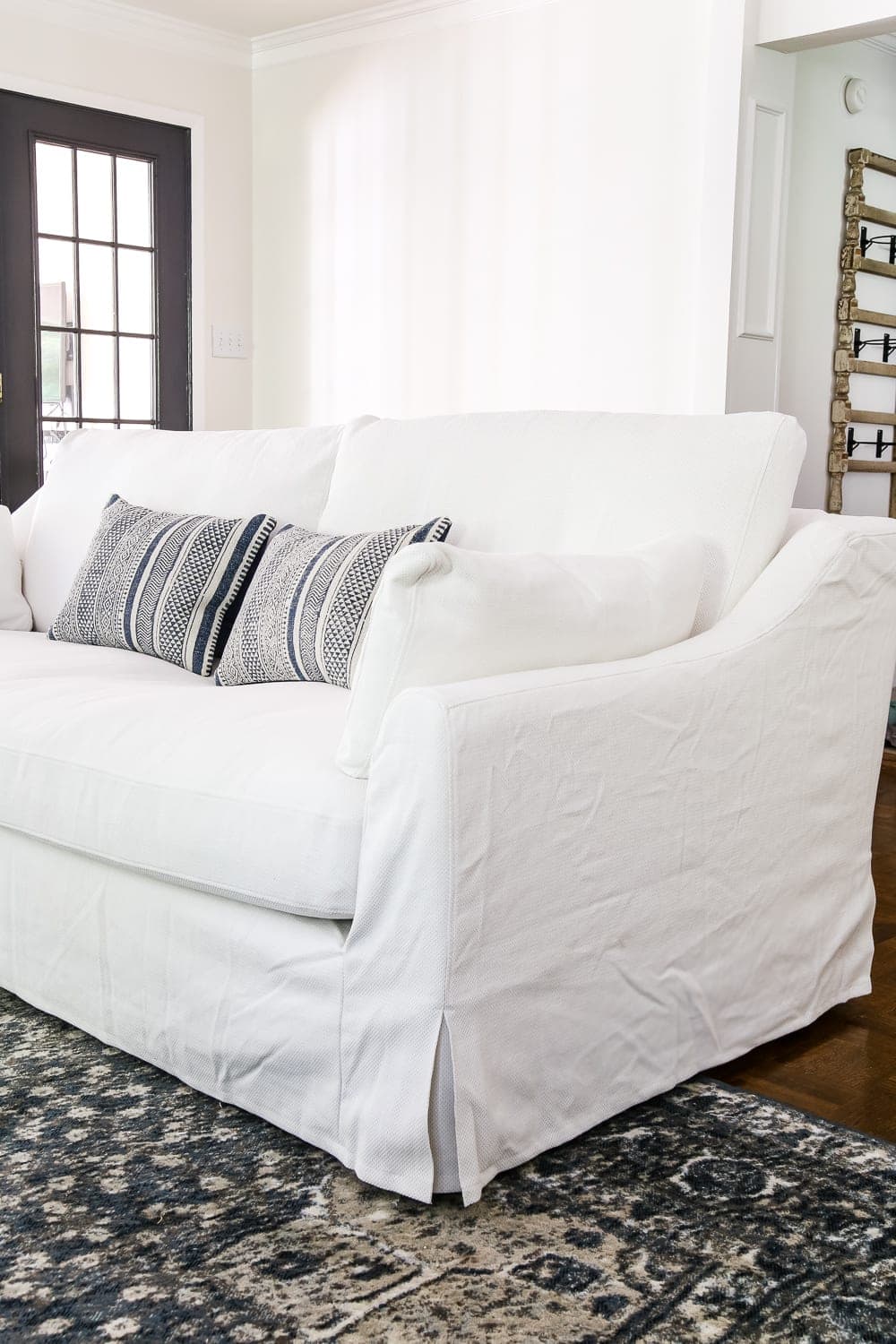 The fabric is more textured and not really as soft as the cotton blend slipcovers I’ve used on IKEA’s Ektorp sofa, but it also feels thicker, which makes it feel more expensive to me. The seat cushion is one big piece too, so no one sitting in the middle will be stuck in a cushion crack.

The Stocksund chair is almost like a chair and a half. It’s very wide and very deep, so I can curl up in it easily with room to spare. The slipcovers only come in darker colors and patterns, so if you’re a white furniture lover, this one won’t work. (Crossing my fingers that they come out with lighter colors later on.)  But the texture is a bit softer than the Farlov. 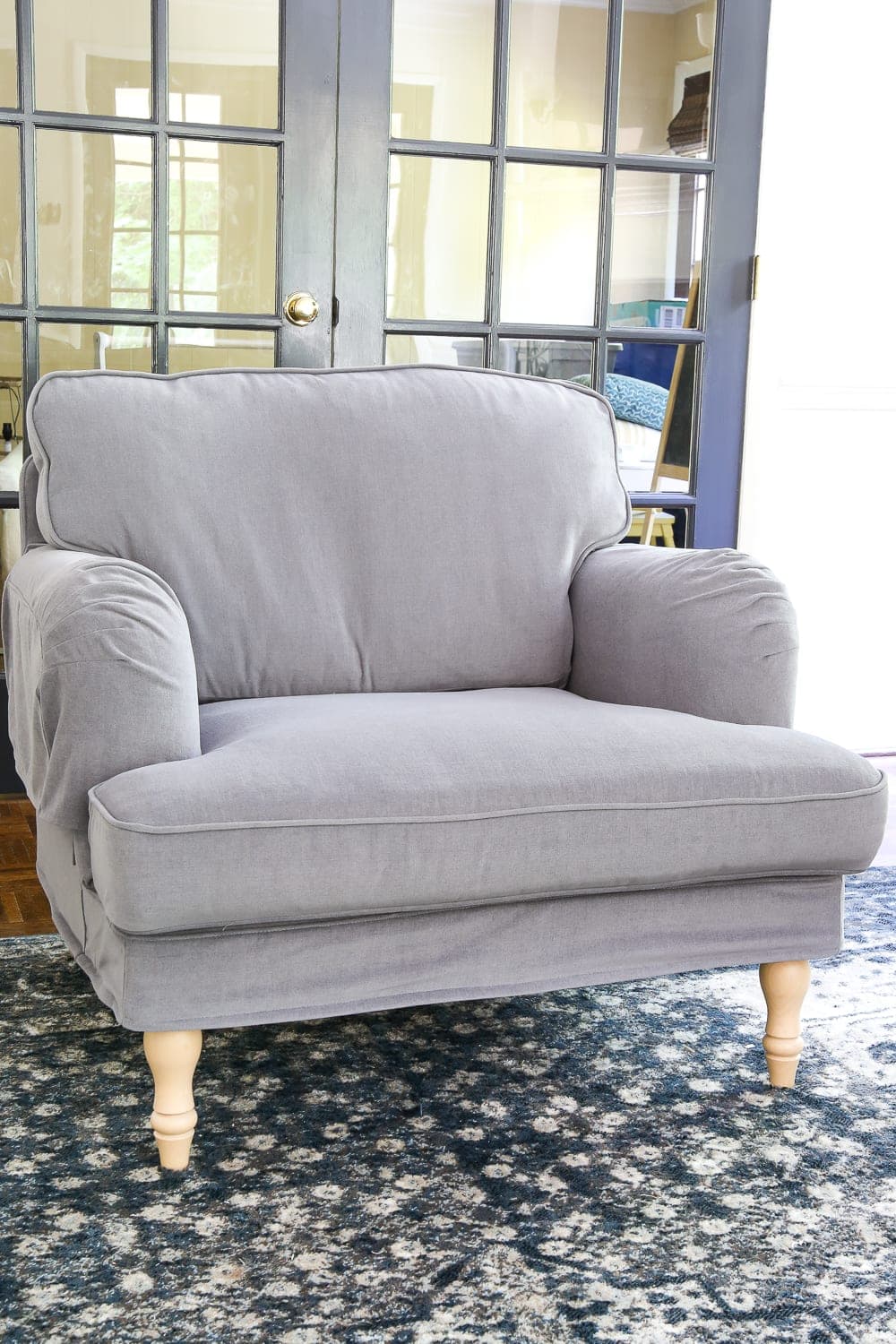 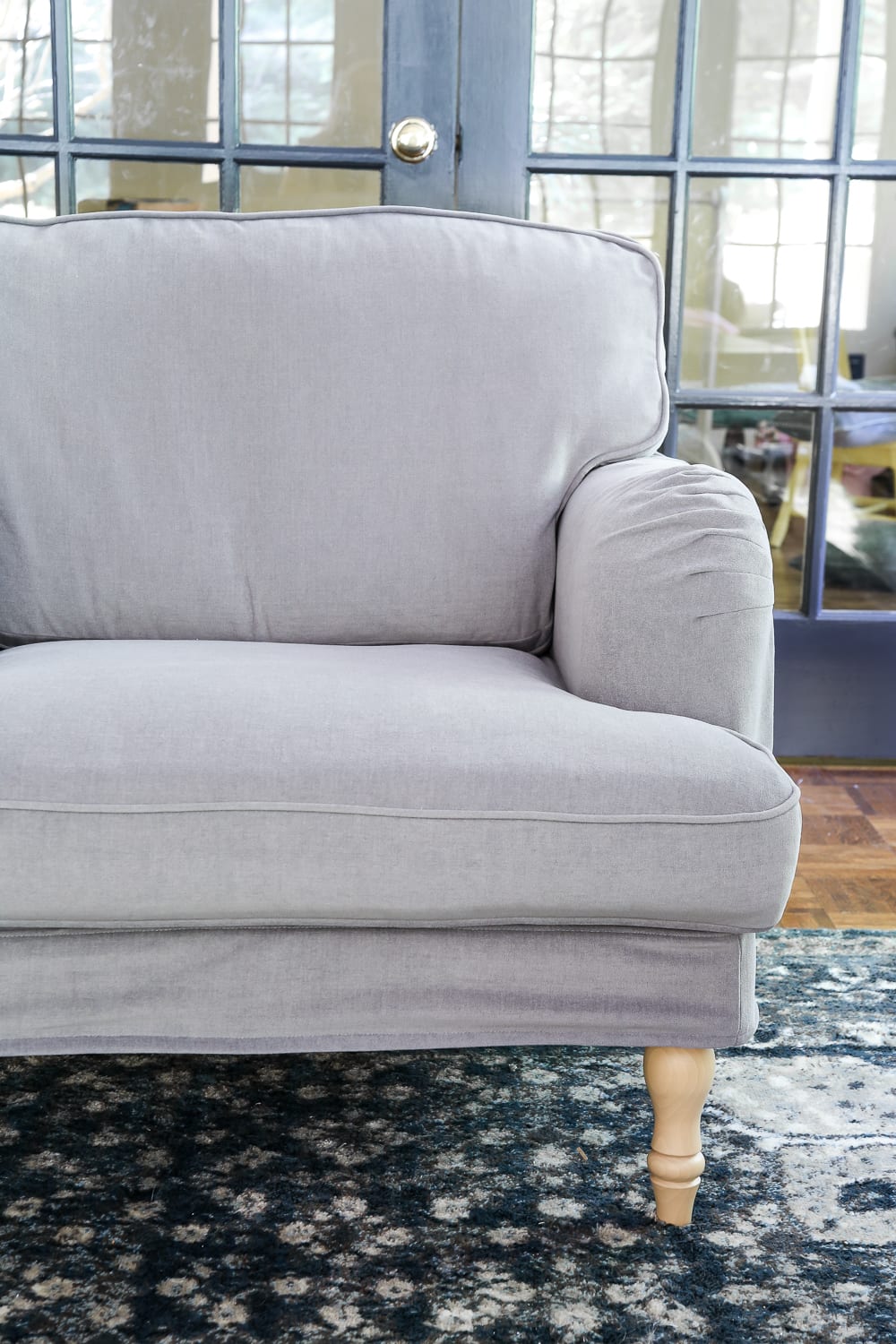 So far, our Farlov and Stocksunds are rather firm, but after sitting on the ones in the store, I’m confident they will soften up over time. Still, for less than $1,500 for a sofa AND two large chairs with covers that can be easily replaced, I’m totally sold.

The slipcovers are washable, but to keep them protected to reduce the need for washing, I sprayed them down with two light coats of some Scotchgard that I just picked up at Walmart. I did the same to our last upholstered beige sofa and it worked like a charm! For small spot treating, I use Tide stain remover pens. I love that if there’s ever a spill or muddy paw prints, I can take off just that one dirty cushion cover and wash it, instead of the whole sofa. 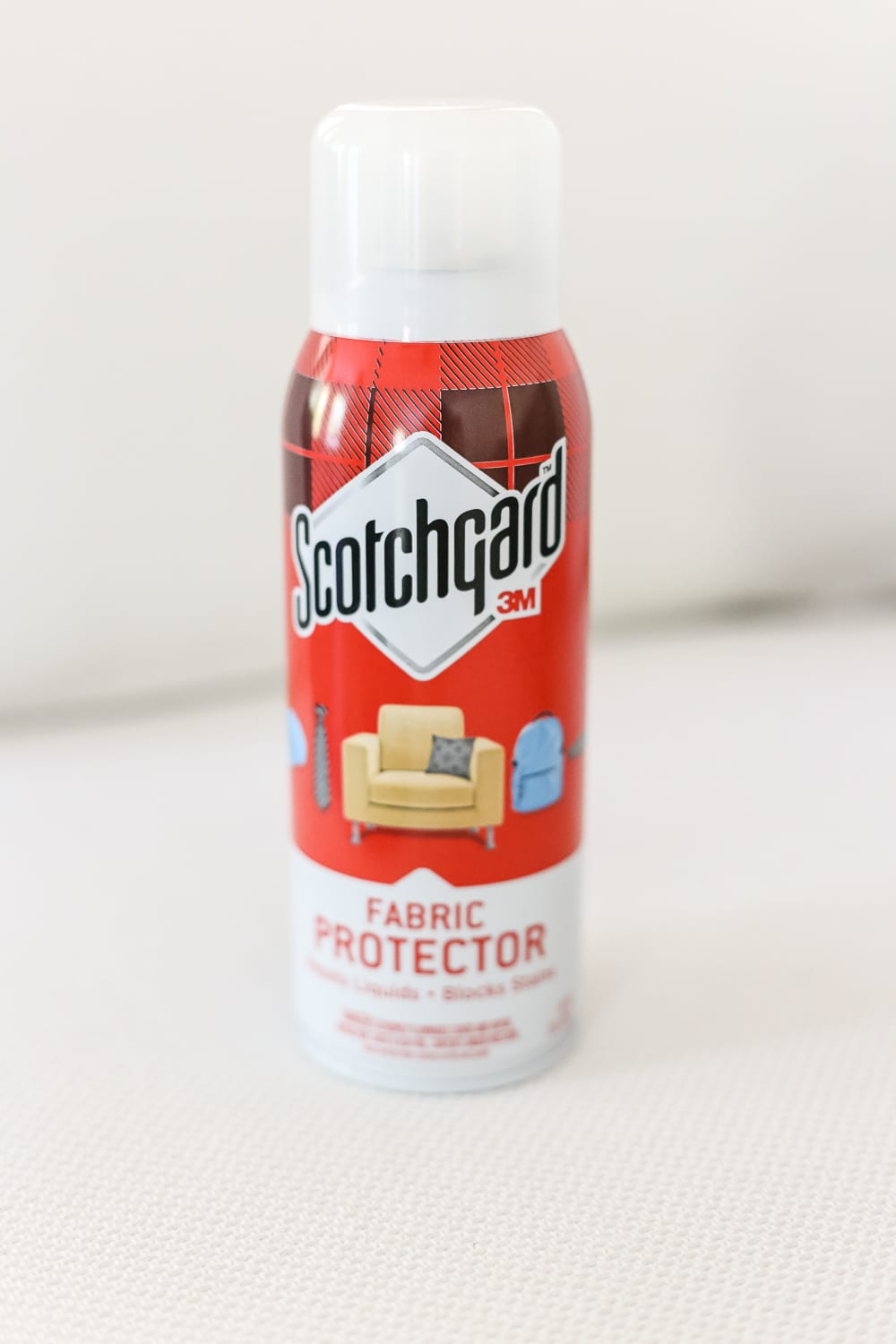 I know white will be a gamble, but I’m willing to risk it to see how it goes, and if the white doesn’t work out, I’ll spring for the beige slipcover. There are parents who rave about the joys of a white slipcovered furniture and those who absolutely despise it, so we’ll see which camp I fall into in a few months. I’m sure I’ll share an update later on about how it fares.

The rest of the living room is quickly coming together too thanks to reusing our old master bedroom rug and this coffee table I found on Craigslist for $90. Woot! (Here’s the full living room plan and some of the progress so far, if you missed it.) 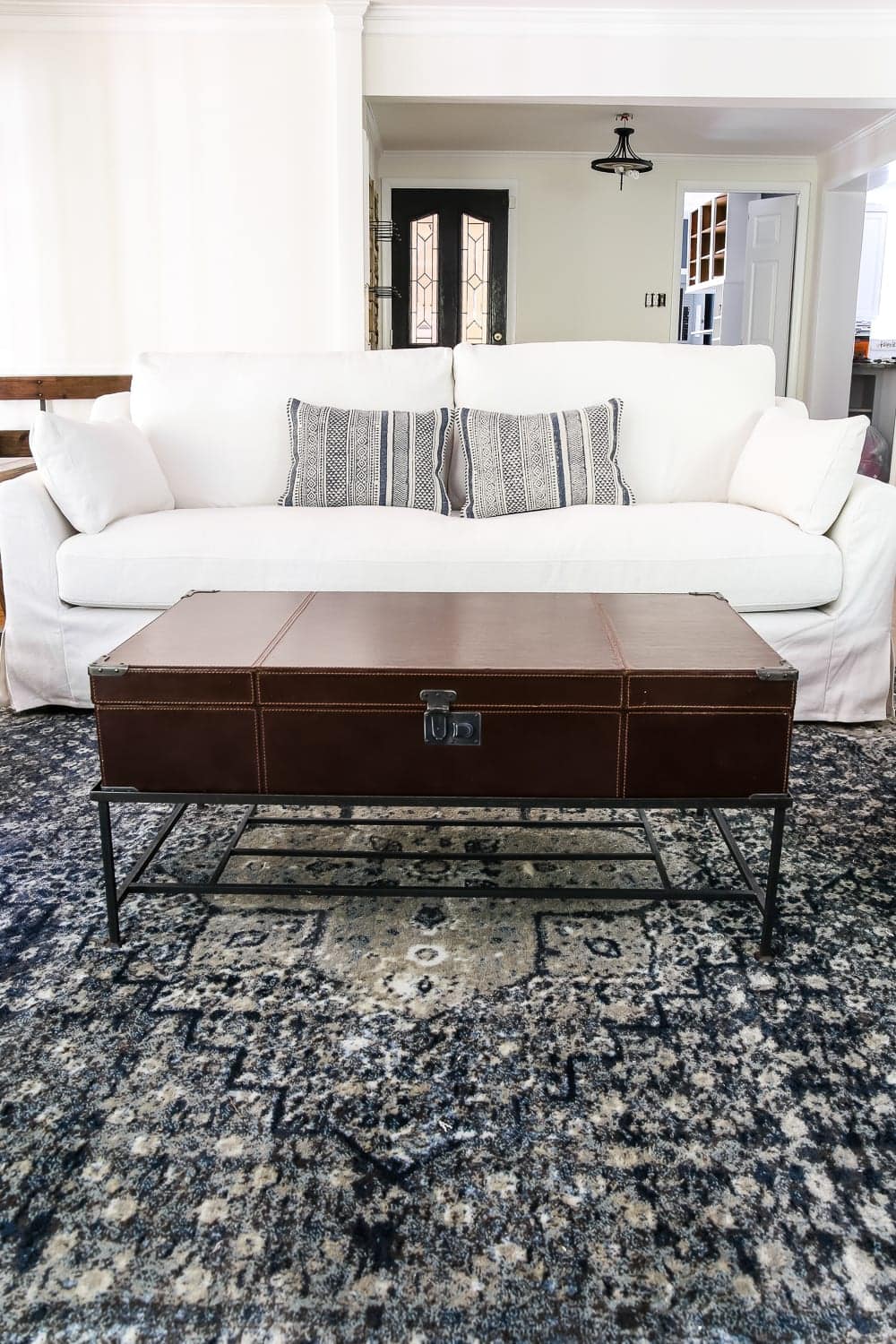 I’m so excited that we at least have furniture in here now. Ya know… so we have a place to collapse after days upon days of projects. 😉

Right now, this room is still looking a bit rigid and cold to me, but I know once I toss in some cozy throw blankets, greenery, lighting, wall decor, and the little details to soften it up, it will look much more inviting and homey.

We still have a lot more to check off the to-do list in here, like swap out that ceiling fan and deal with Robert’s surround sound boxes in the corner there. And then there’s the breakfast nook, which I’ll be sharing more about in the next couple of weeks. 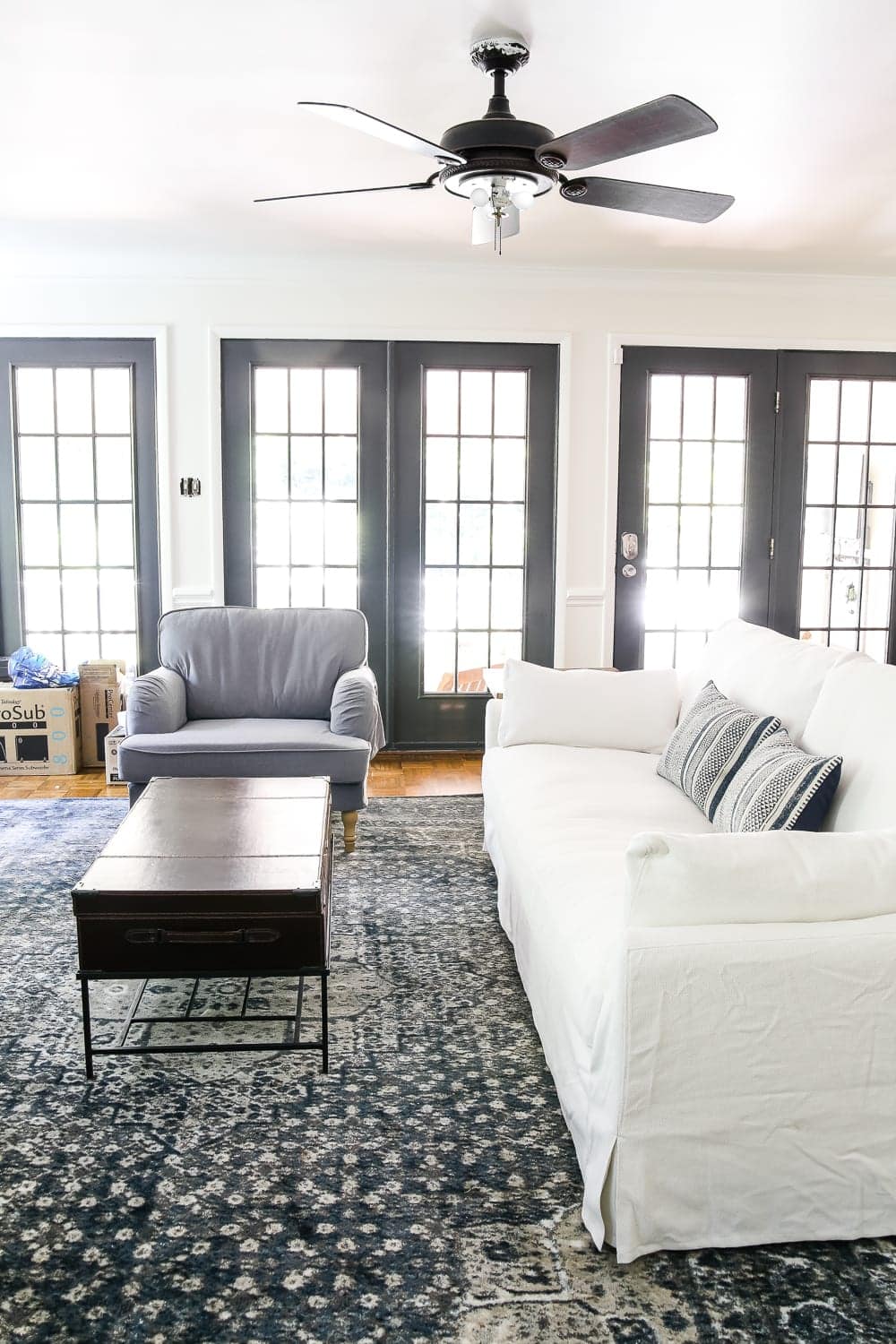 Are you a big slipcovered sofa fan? Or have any slipcover care tips? Do you have a living room makeover coming up on your project list? Maybe once this one is finished we’ll prove Martha Stewart wrong. You think that’s ever happened before? It might be ambitious, but we’re going for it. 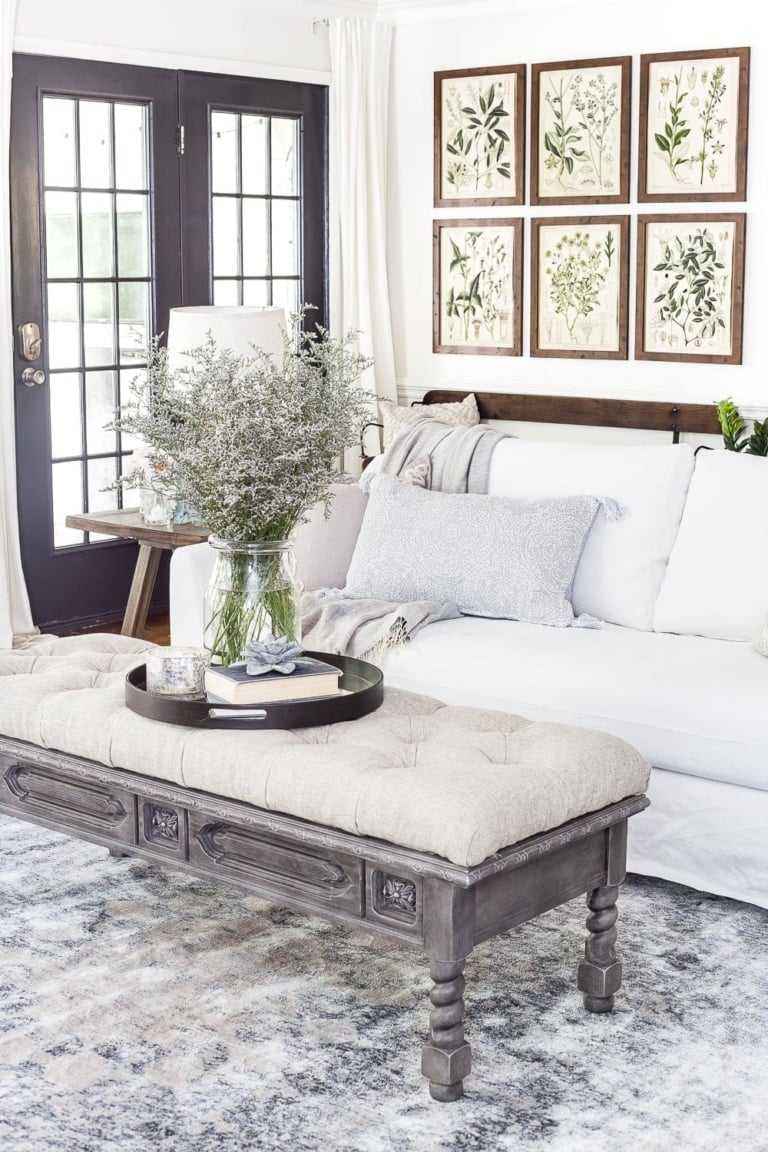 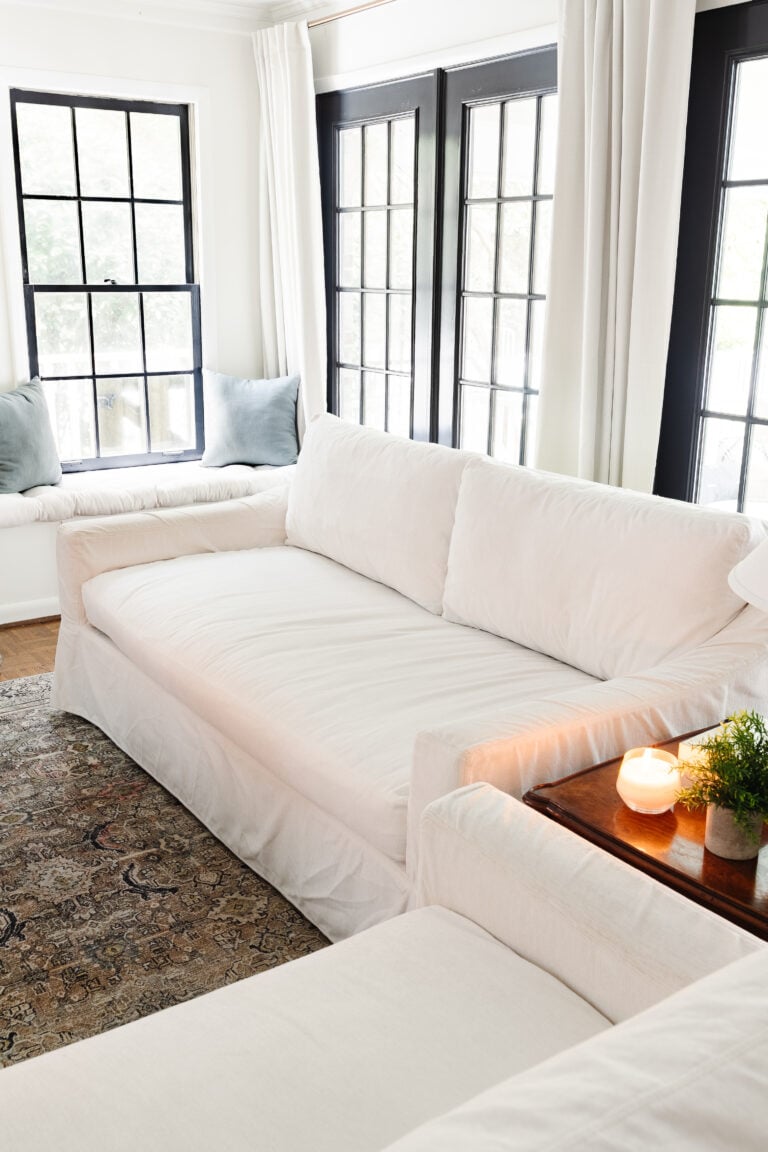 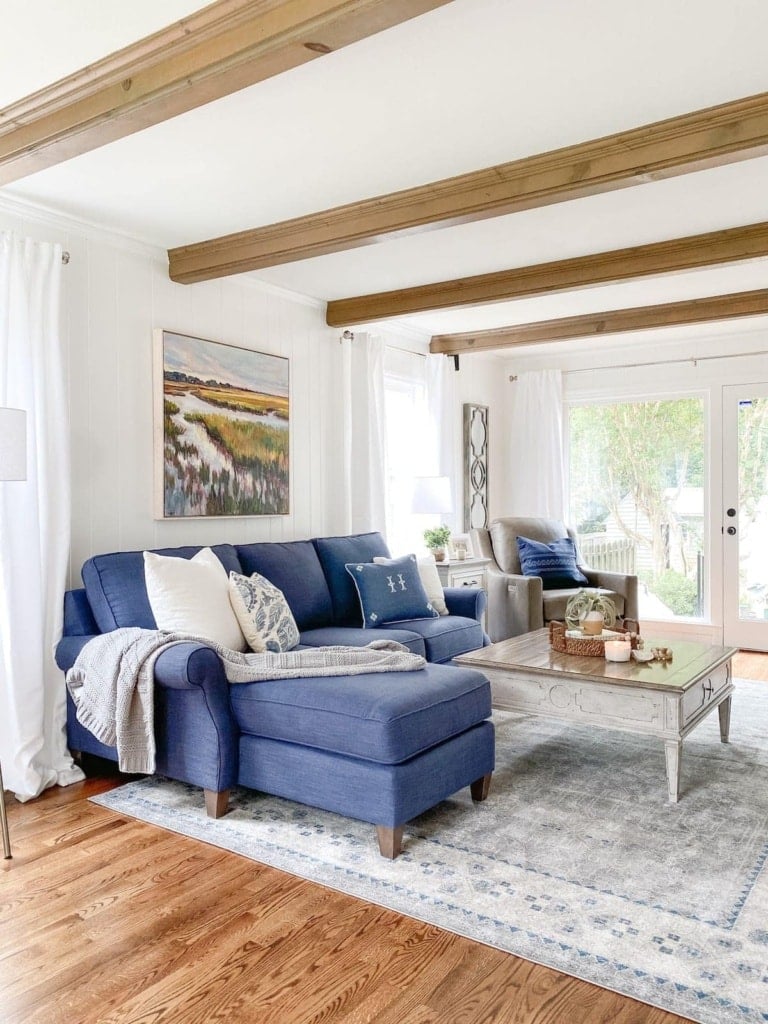 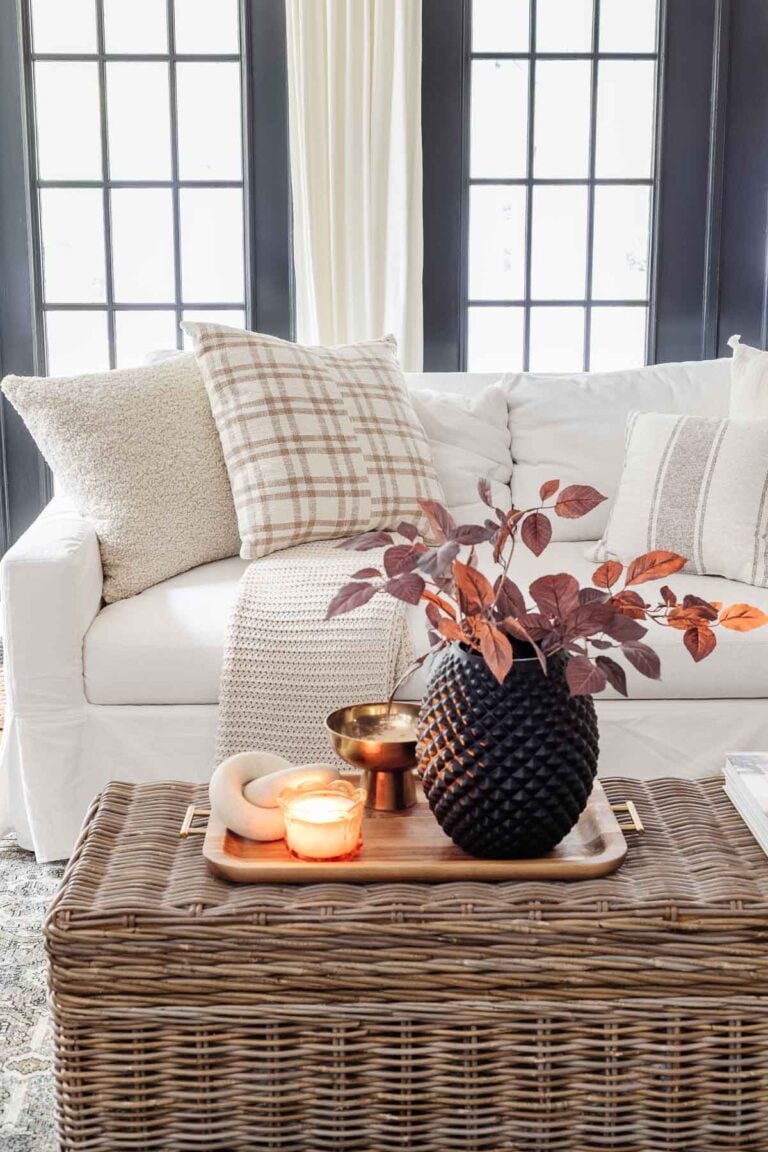 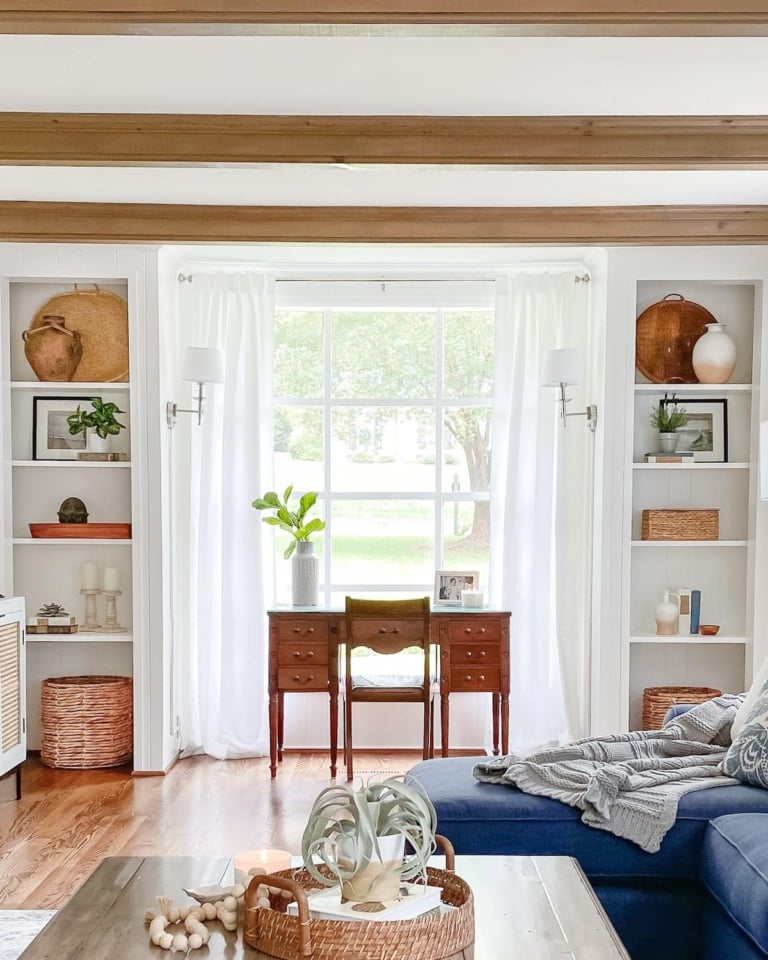 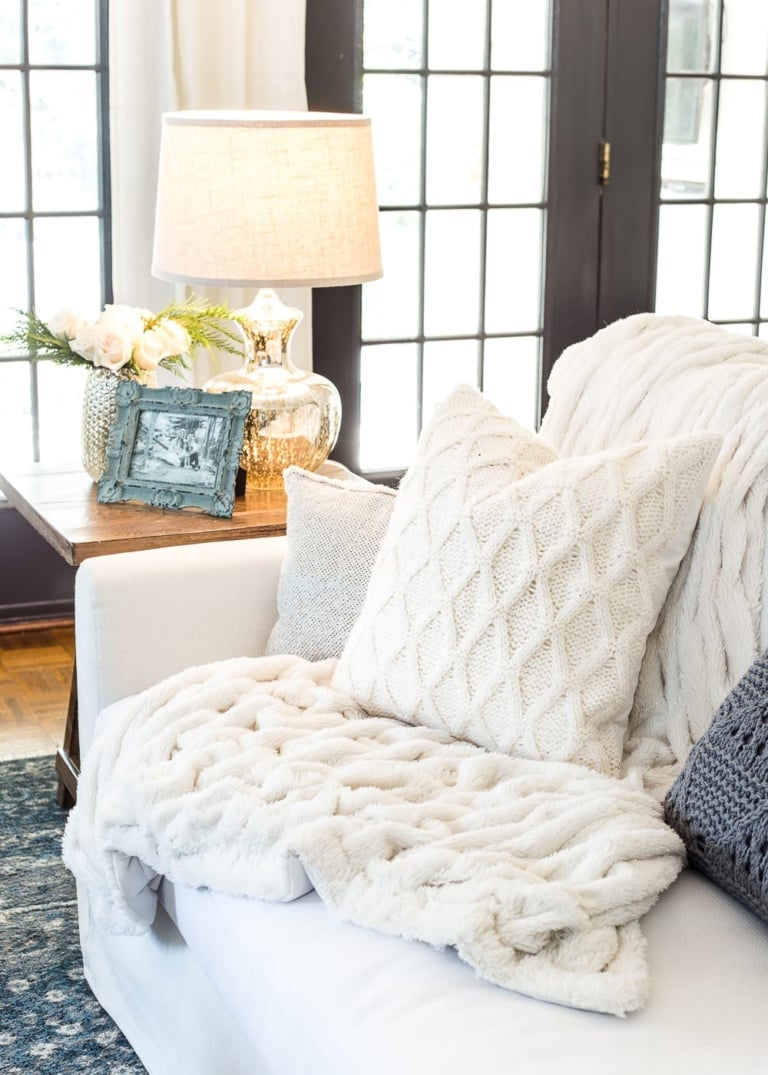