A quick tip for painting French doors without scraping, taping, or splotchy peeling paint. This trick saves SO much time and looks amazing like a factory finish!

This post has me singing a theme song courtesy of Coolio.

Been painting most our lives living in a French door paradise.

Because there are so. many. French. doors. in. this. house.

They made me fall in love with this place. The minute I walked into the living room on our first tour, I knew those pretty doors needed to be mine. 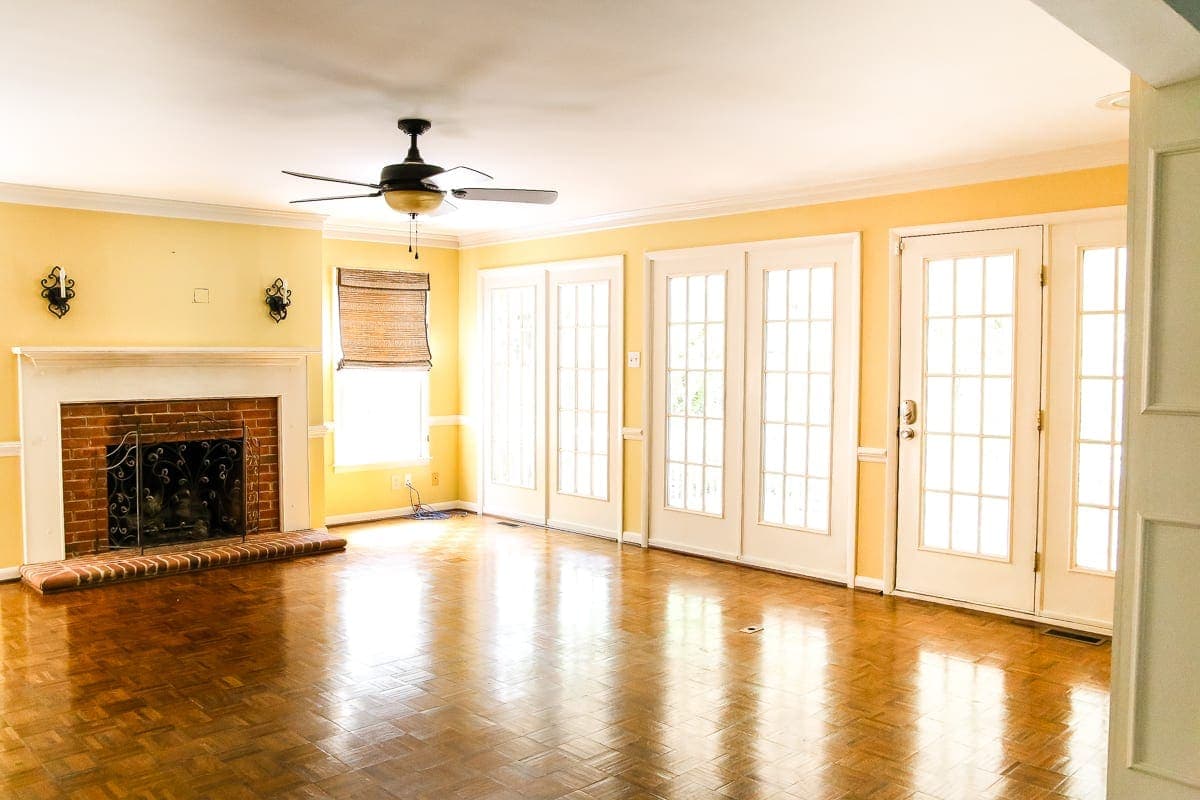 But then… we had a fight, those doors and I. Because painting the 8 French doors in that room took dayyyyyys of taping and scoring and scraping and maybe a little bit of cursing. 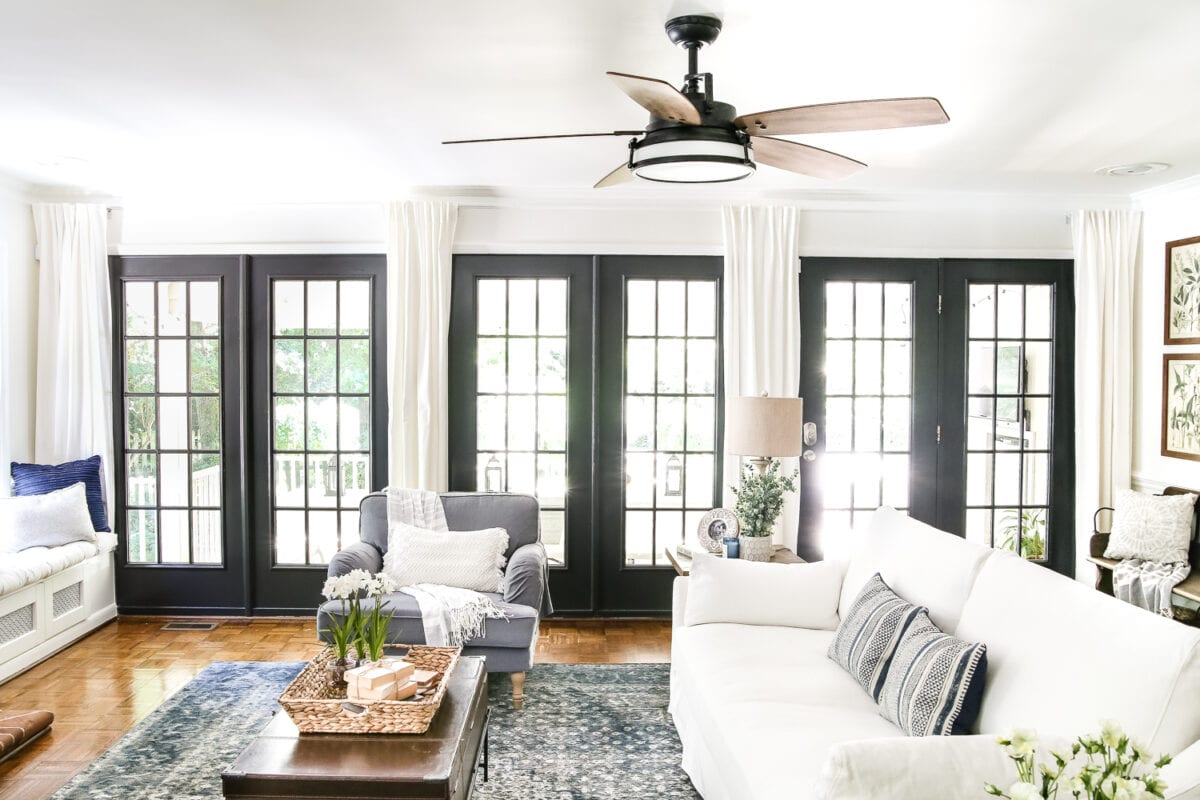 They sure turned out pretty. It was just a laborious process to get there. 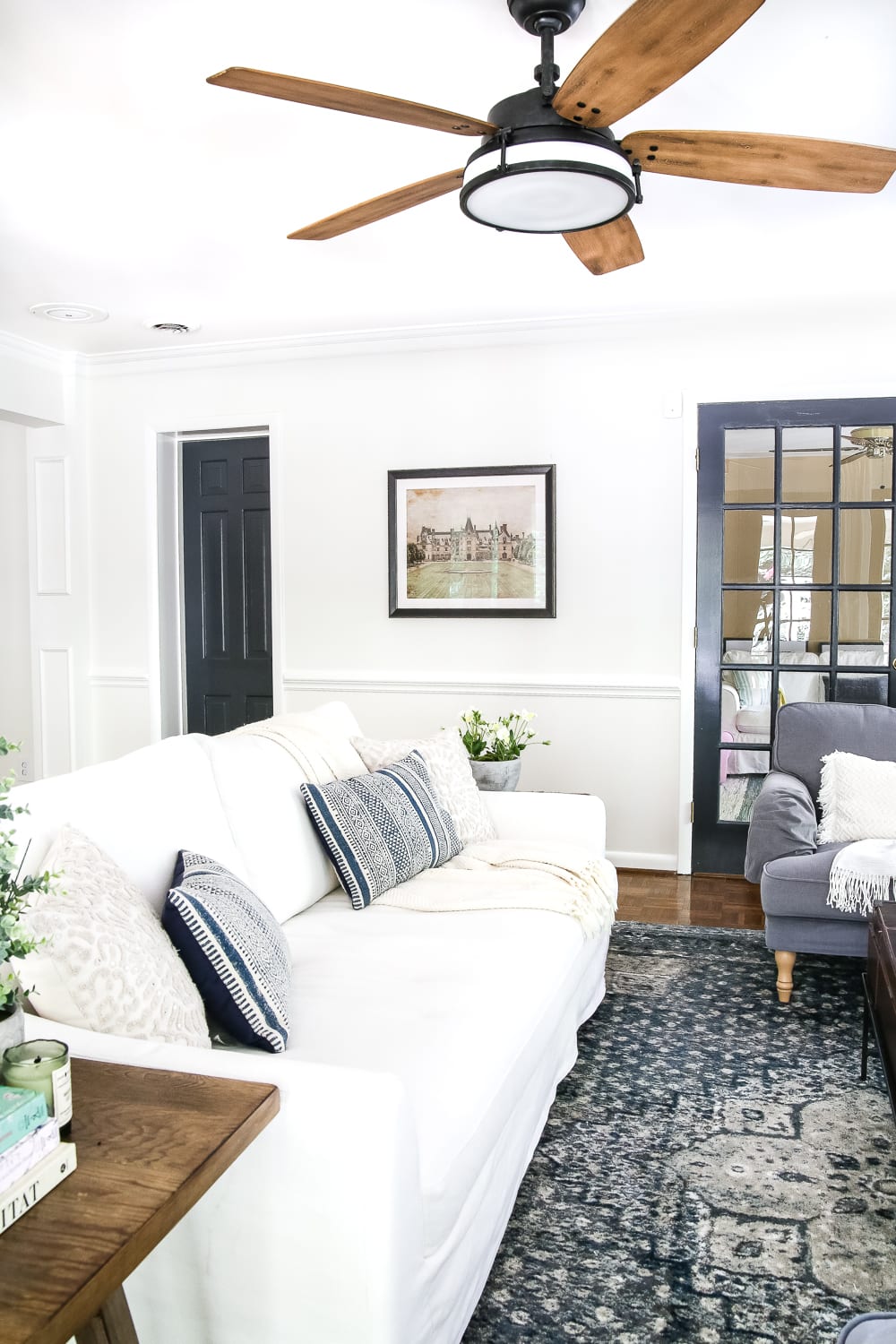 (Some affiliate links are provided below. Check out my full disclosure here.)

So this time, now that we’re embarking on a new makeover adventure in the playroom, I was determined to find any way to avoid scraping more French doors for hours and hours all over again.

I almost went as far as to hire professional painters to come in and just paint the room, doors and all, for us, buuuuut it was going to cost $750 so that was a big ol’ NOPE.

But then I found the BEST trick ever! And it’s actually really fun to do. Yeah, I said fun. I know, that’s nuts.

This was where I left off with you guys when I shared all of our big playroom plans.

This pair of brown French doors on either side of the playroom fireplace: 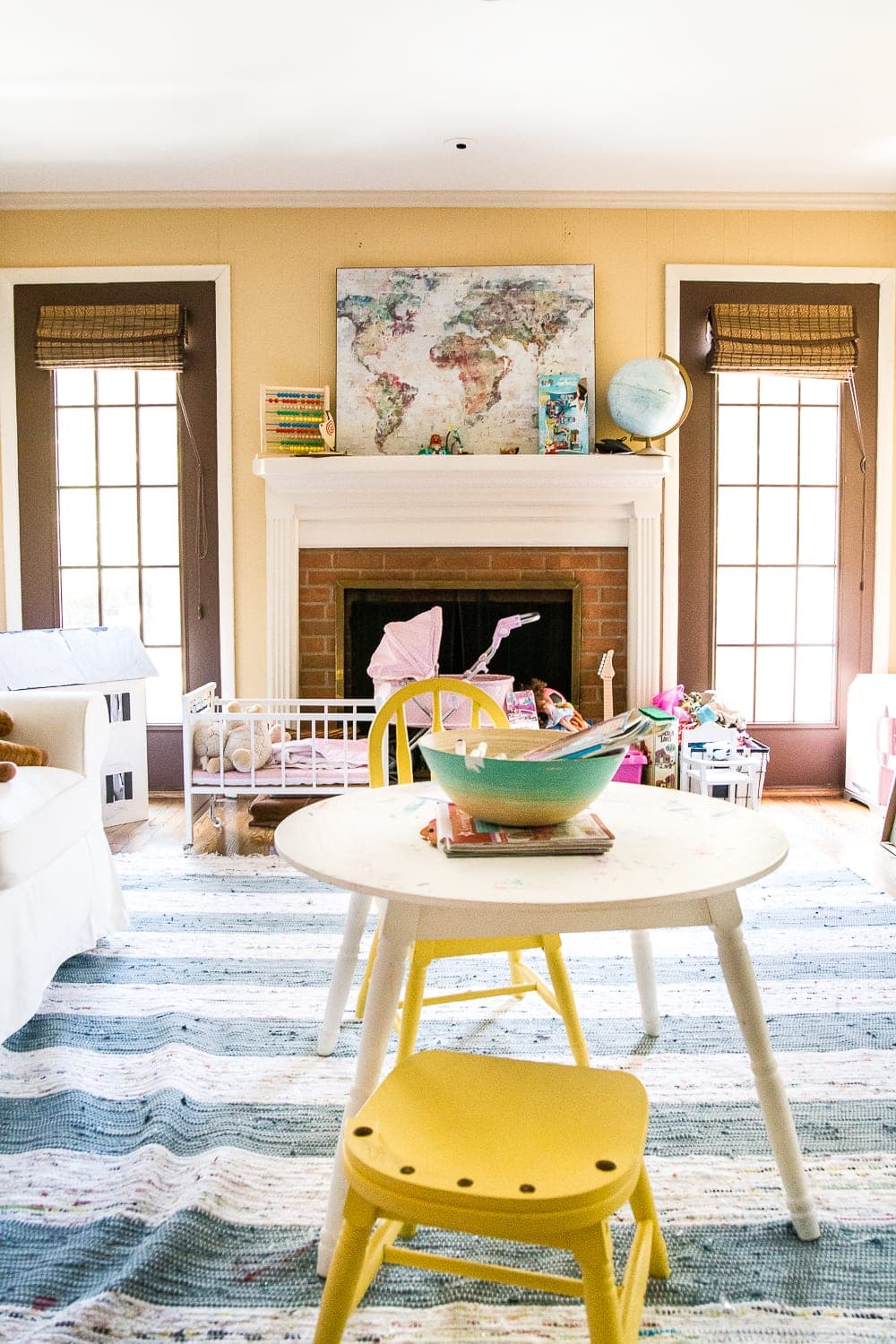 And this set of French doors leading into the playroom from the living room that were still beigey-white on the inside: 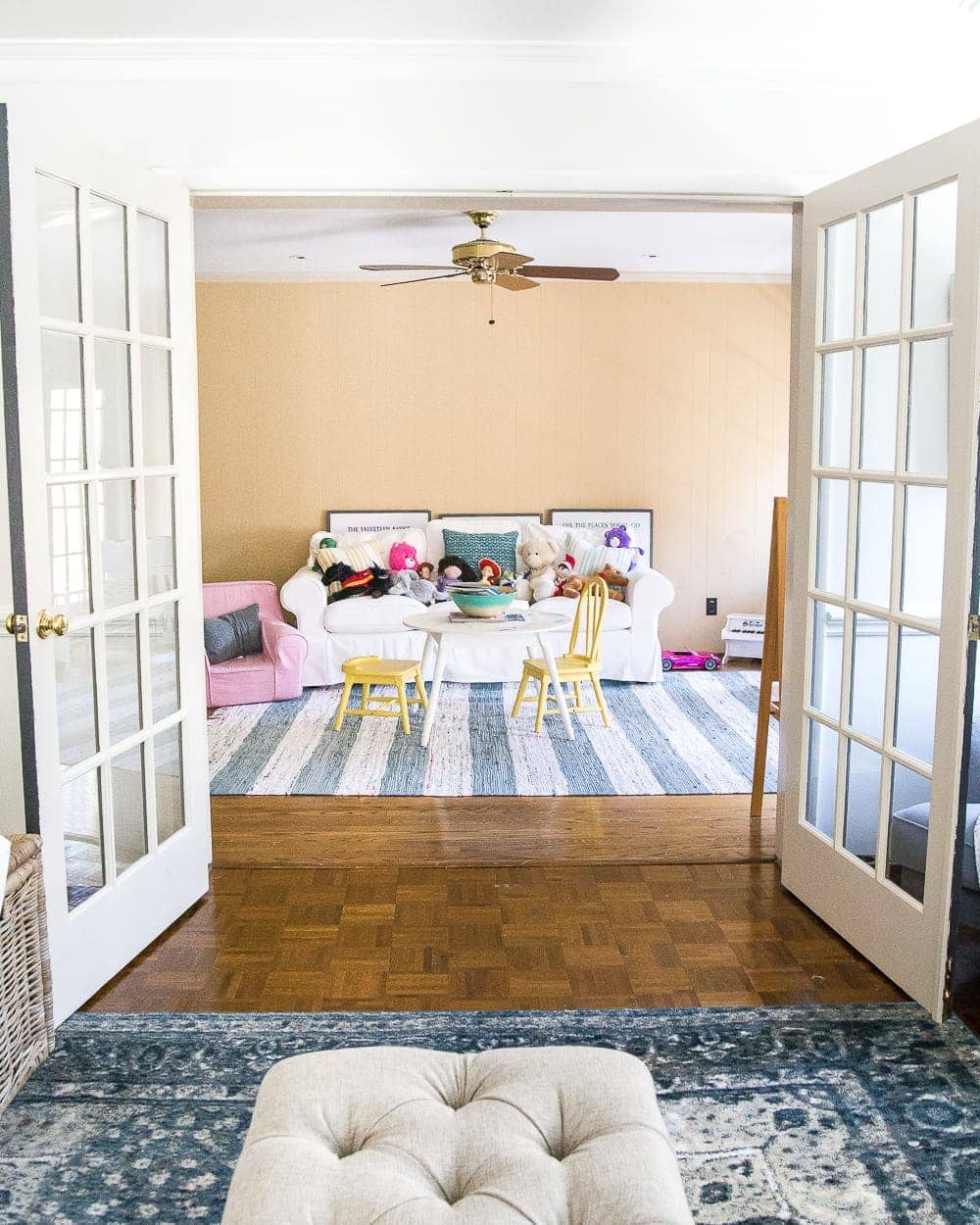 We’ve since painted the walls with leftover Benjamin Moore Swiss Coffee from our living room to eliminate the yellow and the beigey trim is now Benjamin Moore Simply White.

But the beige and brown on the doors still had to go. 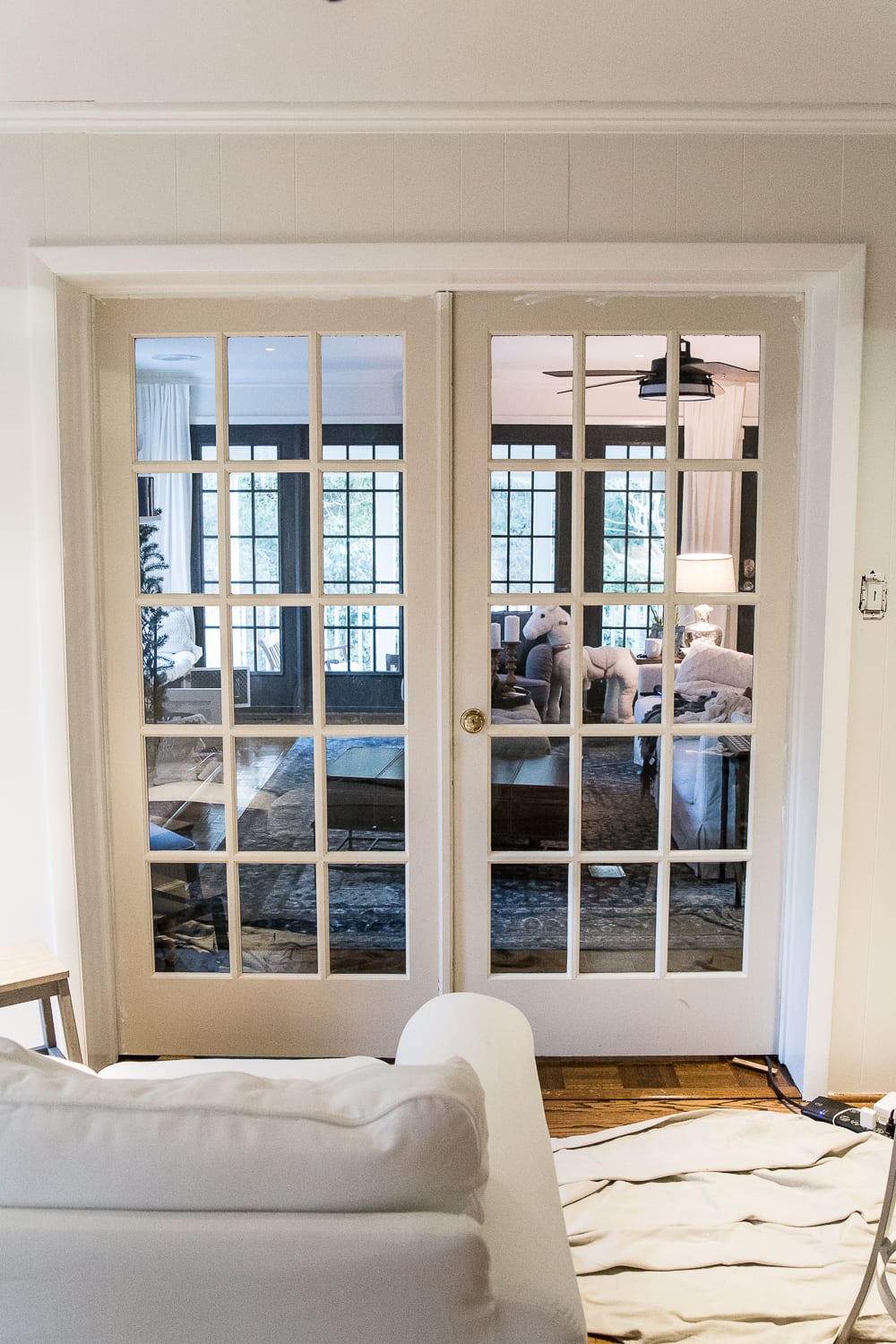 Pardon the dimly lit evening/nighttime photos for this one. #WinterProblems (P.S. You like Olivia’s giant unicorn just chilling out watching TV in the living room?) 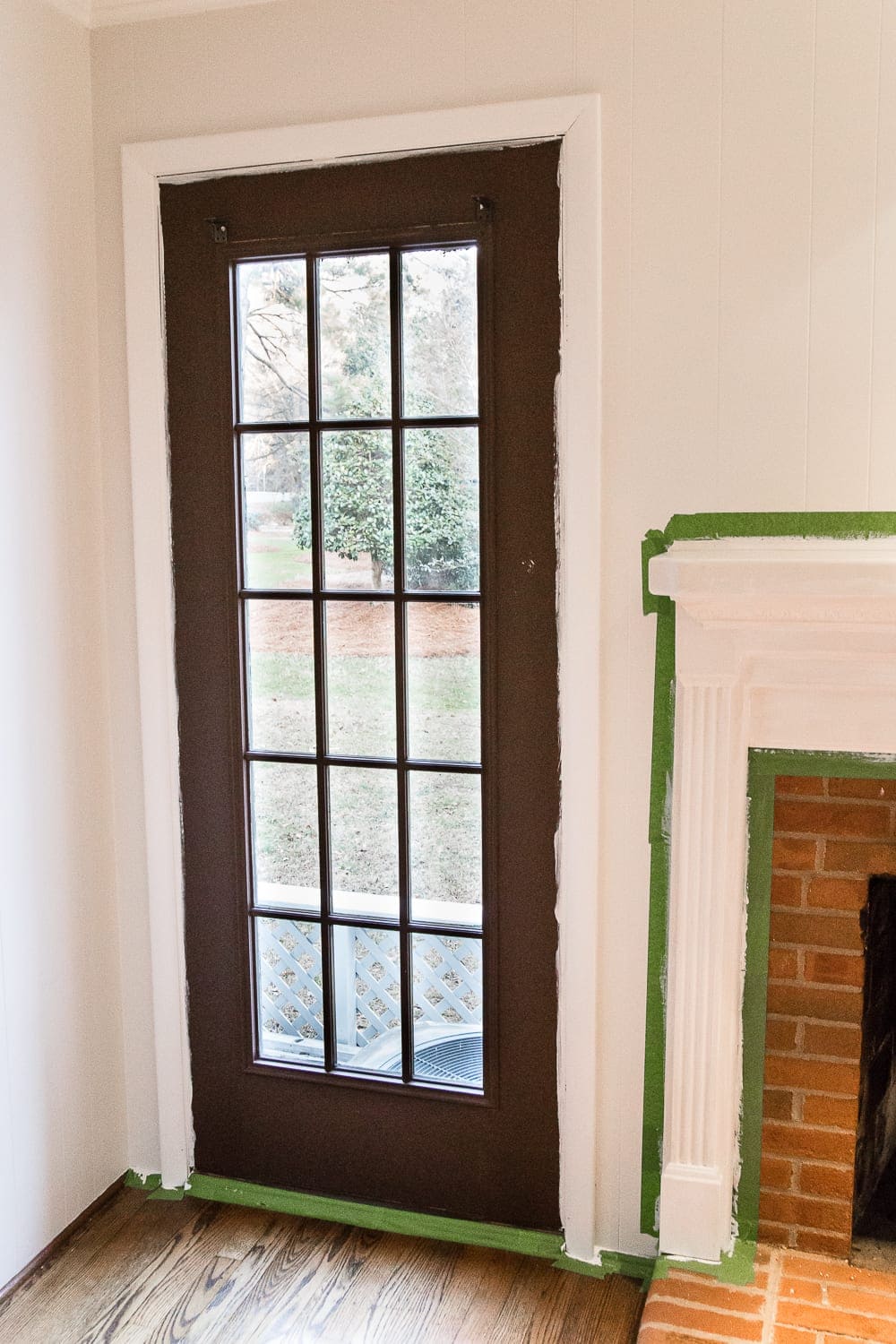 *I pinky promise this isn’t a sponsored post or anything like that. This was just one of those tricks that was too cool and time saving to keep to myself, if you happen to have French doors or windows needing a paint job. Just passing it along friend to friend.

Taping is tedious and makes paint peel. Scraping is time consuming and will drive you absolutely insane. But Masking Liquid is almost as cool as glitter slime. (I think my mom life is showing.)

I just used a 3″ angled brush to apply a thick layer to all of the glass window panes, which took me about 10-15 minutes per door.

It looks like glue at first and will start out looking white. 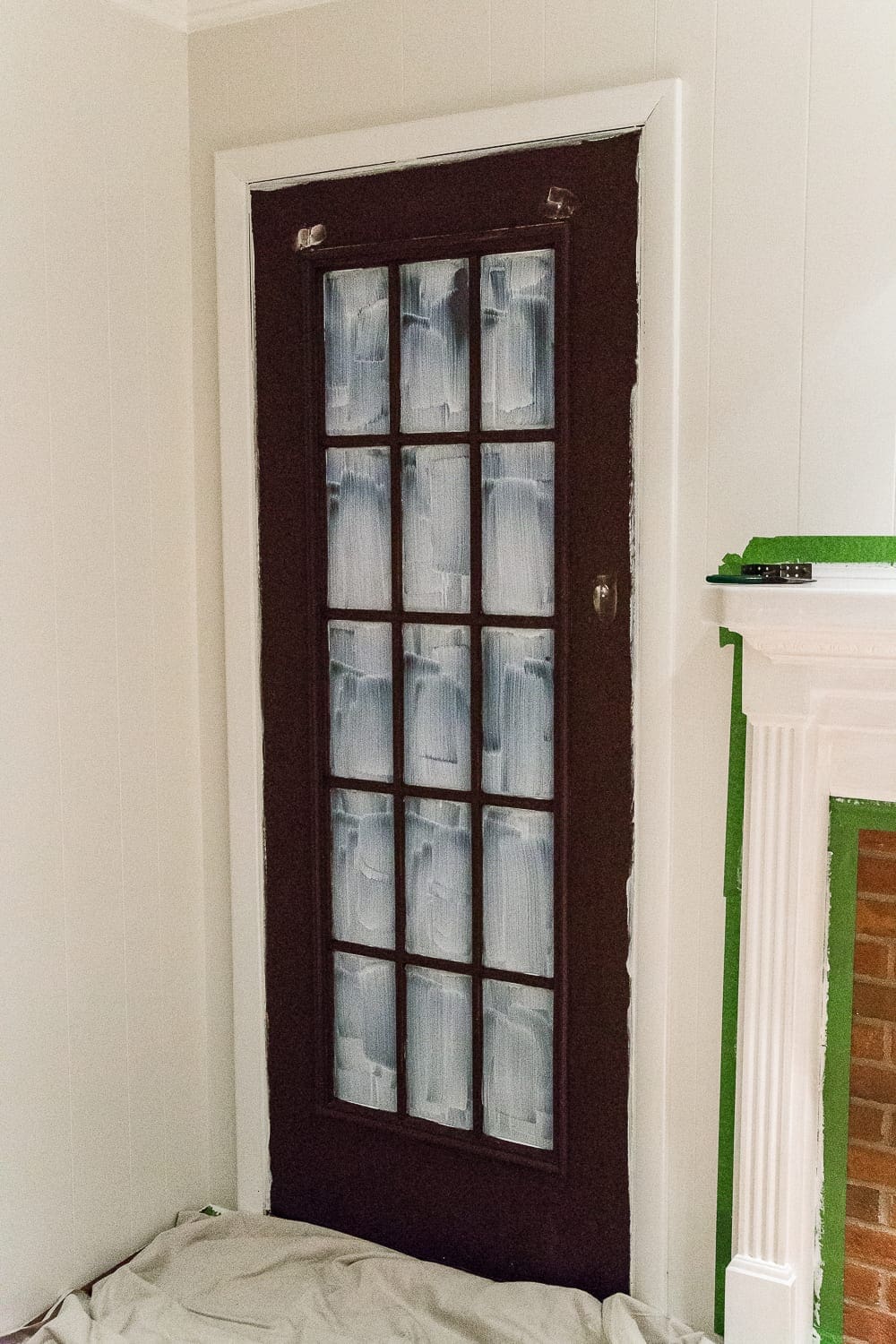 After a few hours, it dries to look like this clear film: 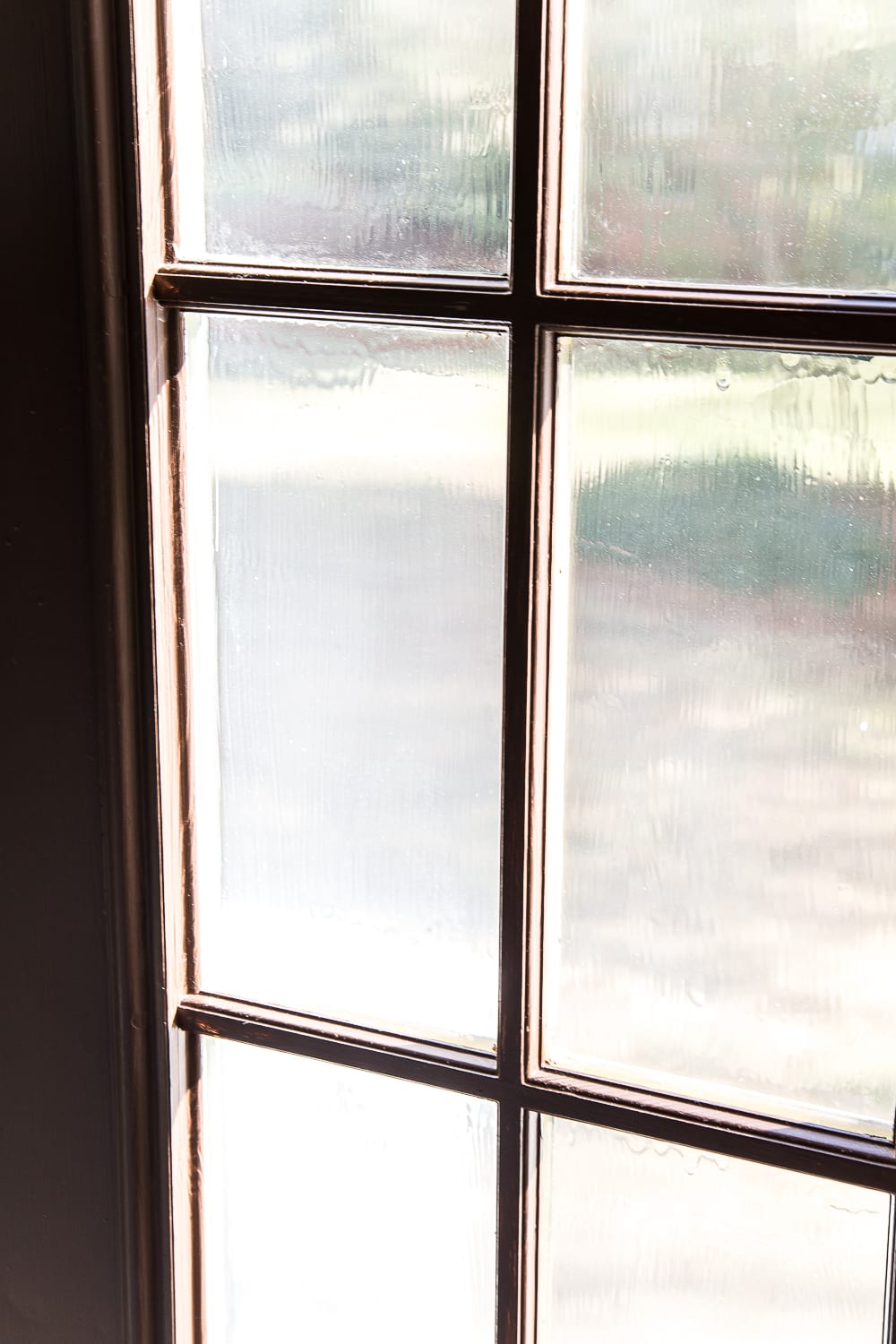 Then, just prime (if needed) and paint on whatever color you’d like. (I brushed on our go-to door color, Benjamin Moore Wrought Iron.) 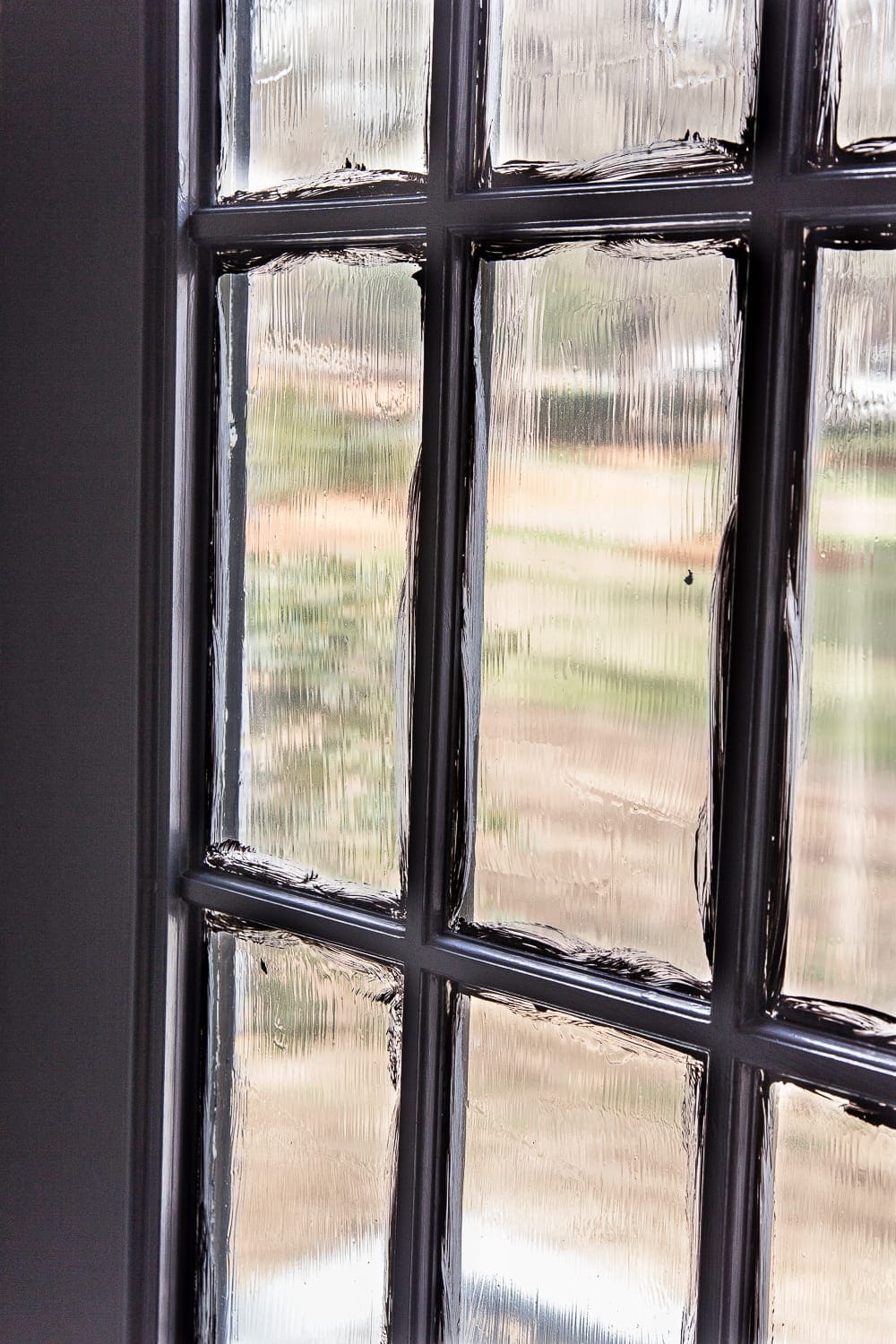 Let the paint dry, and then score the edges of the window panes with a utility knife blade. 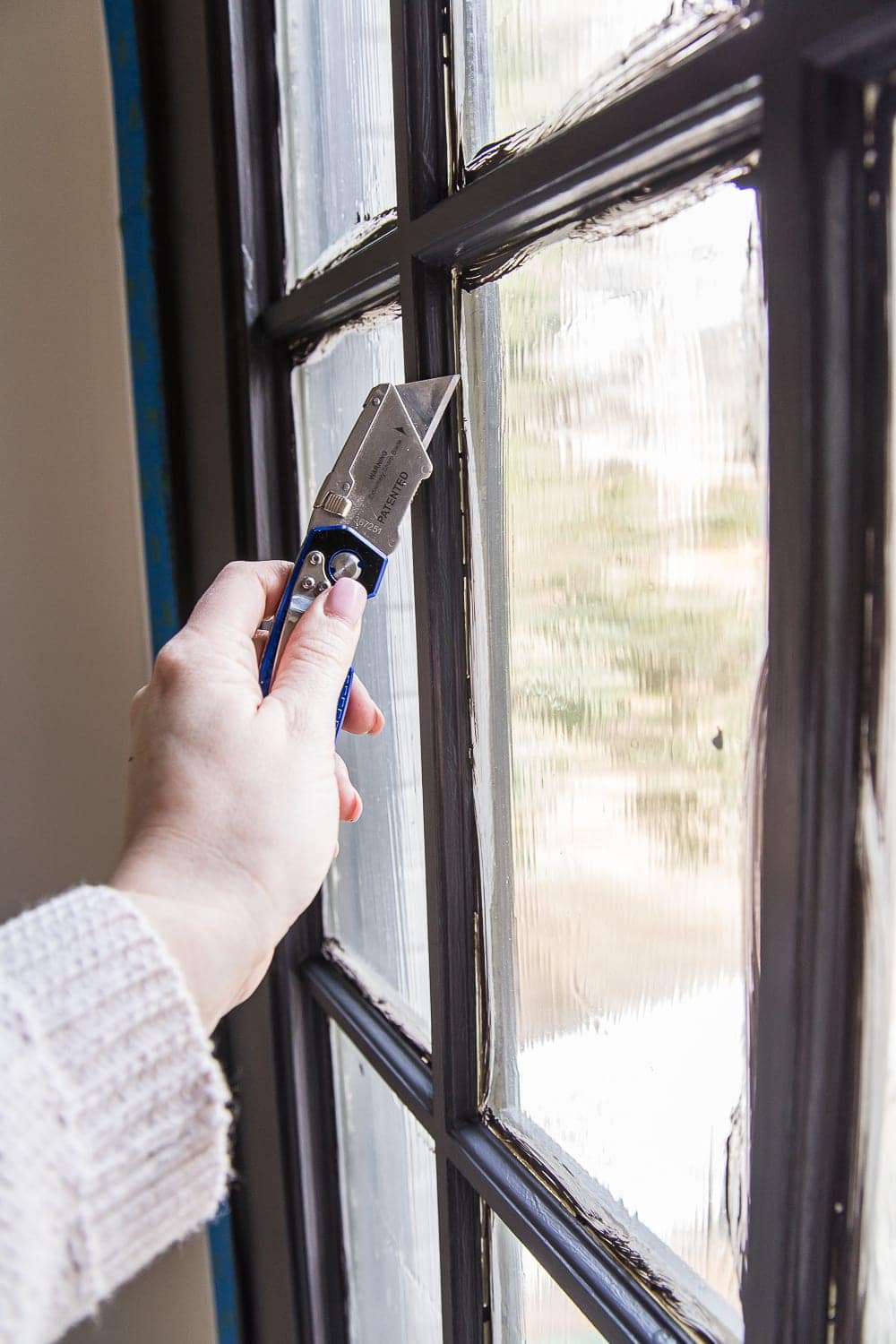 Peel back a corner of the film on the pane and remove it as it comes off in one sheet. 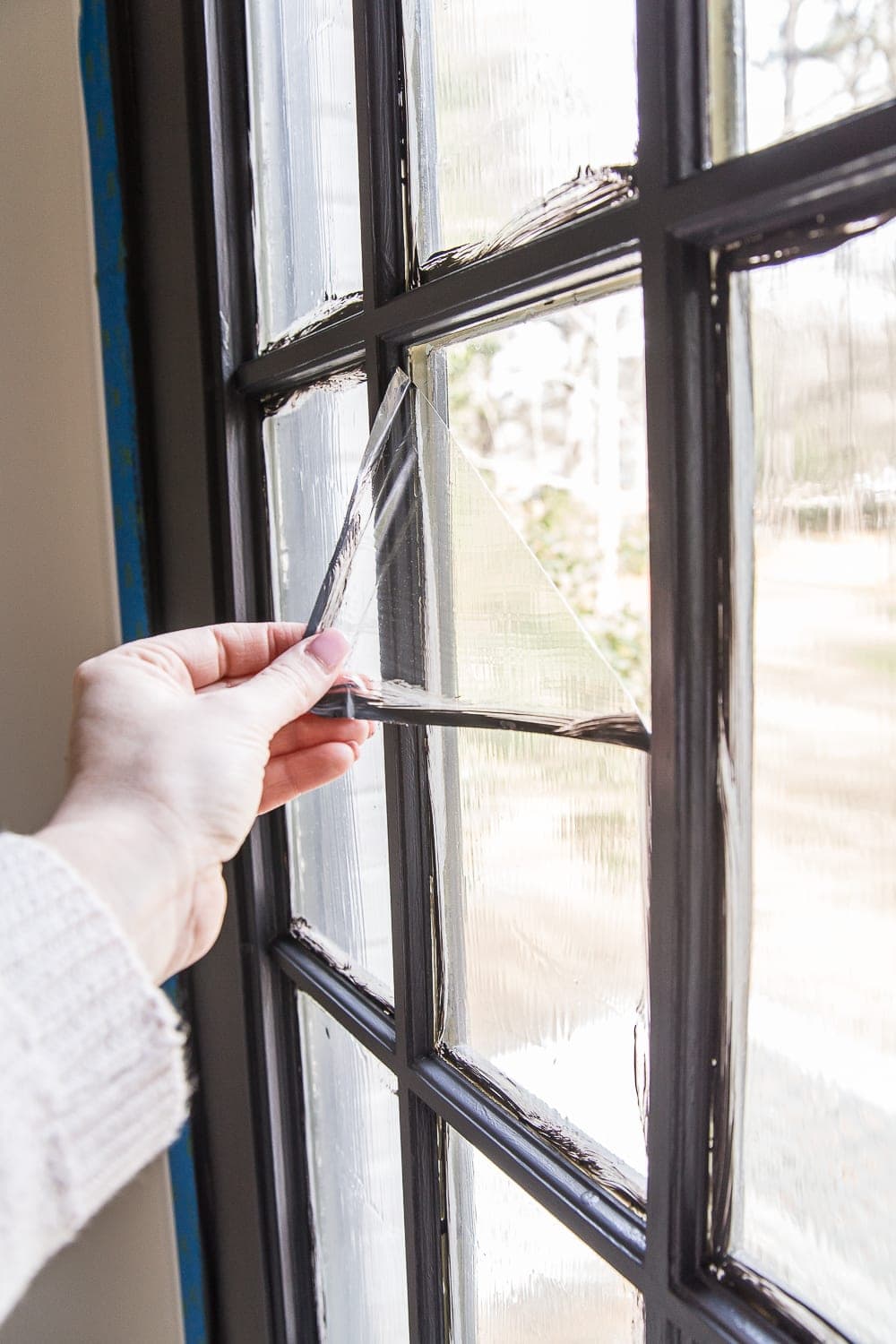 If you have French doors and you try it out, you’ll see what I mean. Totally fun! It’s as satisfying as those charcoal peel mask videos, only less gross. (What’s up with those?)

It only took me about 10 minutes to peel all of the window panes on one door without a single paint flaw. Whaaaat?! 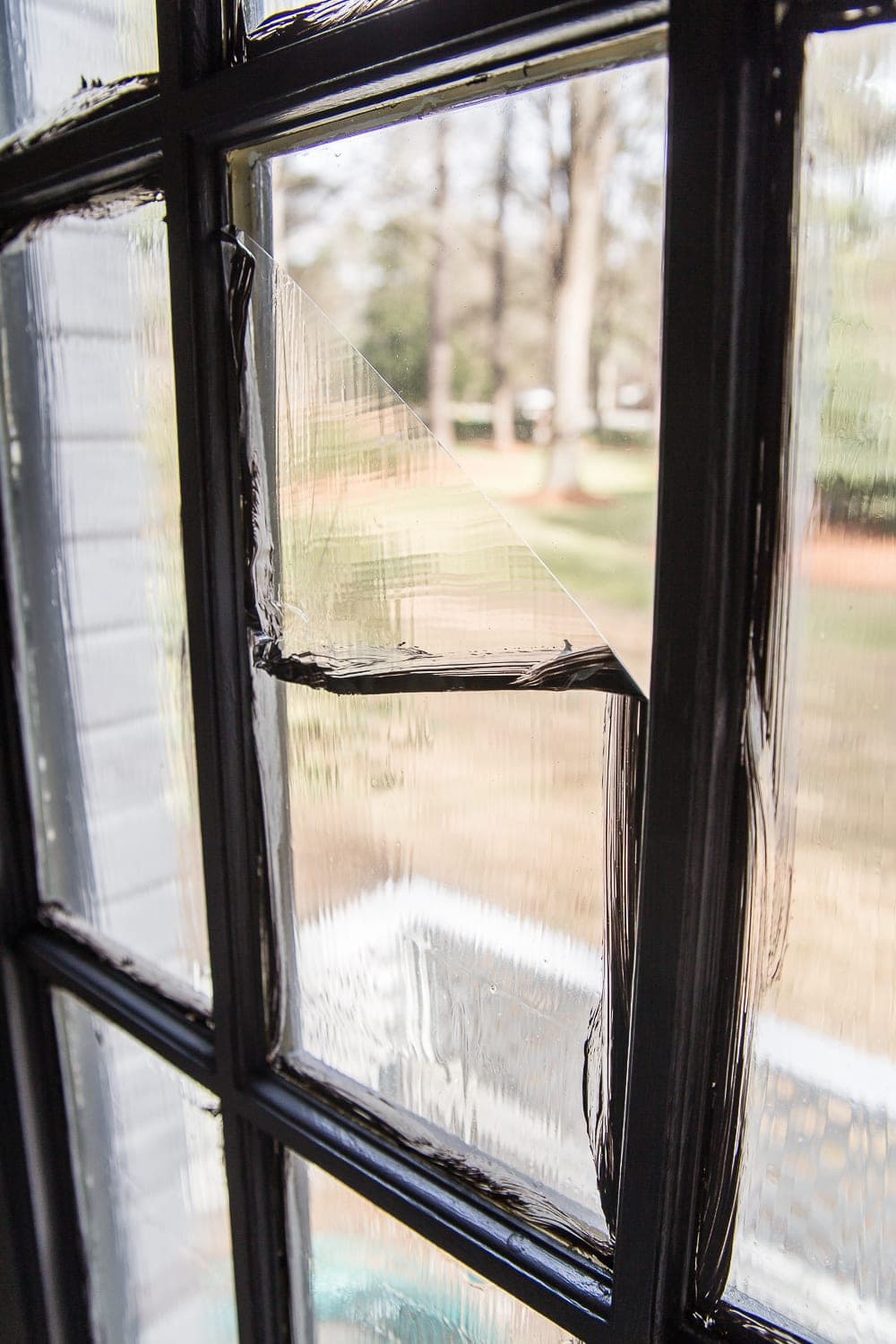 It ends up looking like a factory finish! The playroom doors put our living room doors to shame now. Totally kicking myself for not finding this stuff sooner because what took me roughly 48 hours before took me all of 45 minutes this time around. 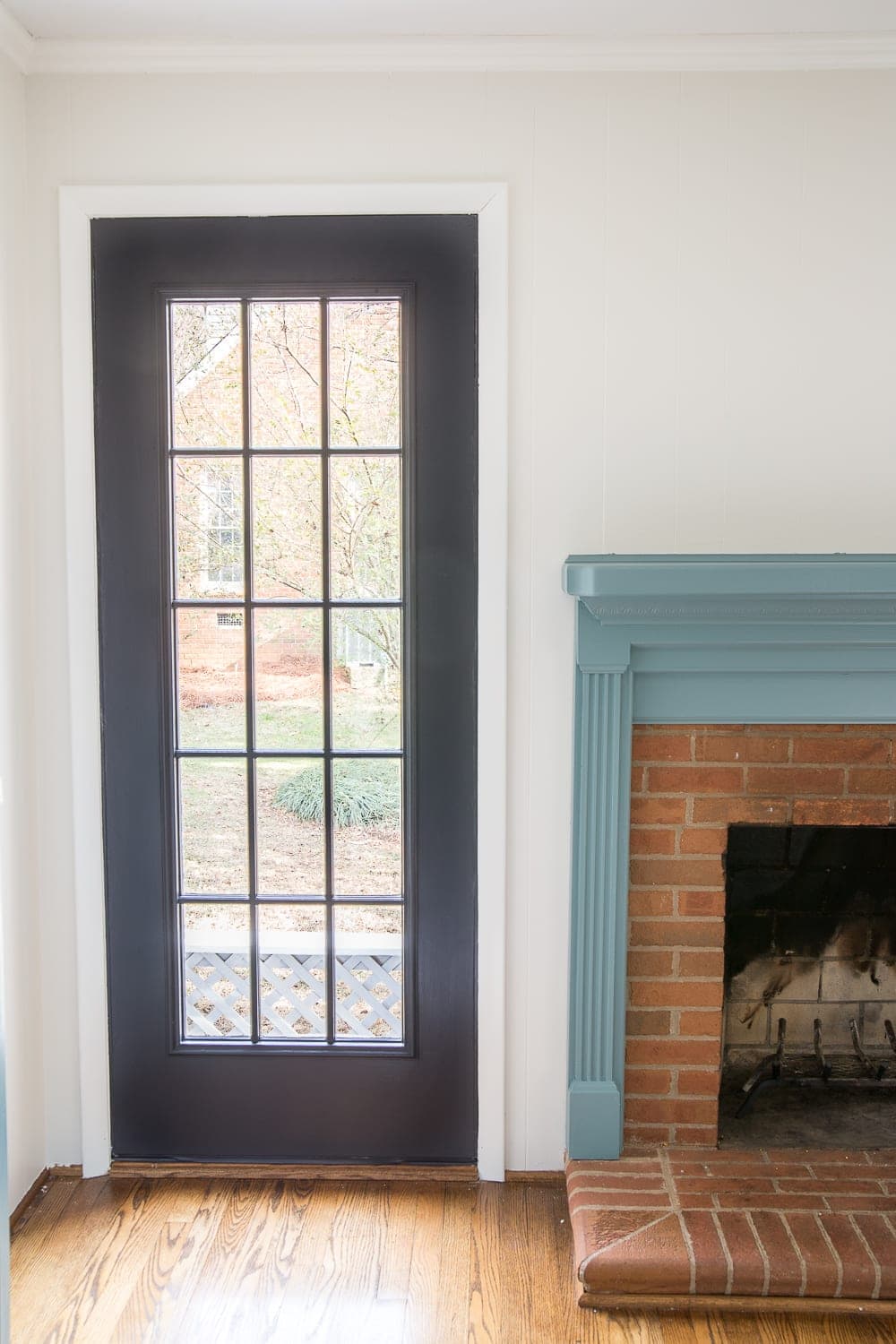 We still have a lot more progress to do in this playroom that is quickly coming together, so I should have another update on this space next week.

But can we just talk about that fireplace for a sec? I painted the mantel in Sherwin Williams Tree Swallow and it is just the sweetest color for a playroom. Right now, with that red brick though, it’s looking kind of 1980s Williamsburg Blue to me. But I still have more changes to make to it, if you’re thinking, “Ewww no. That’s weird.” 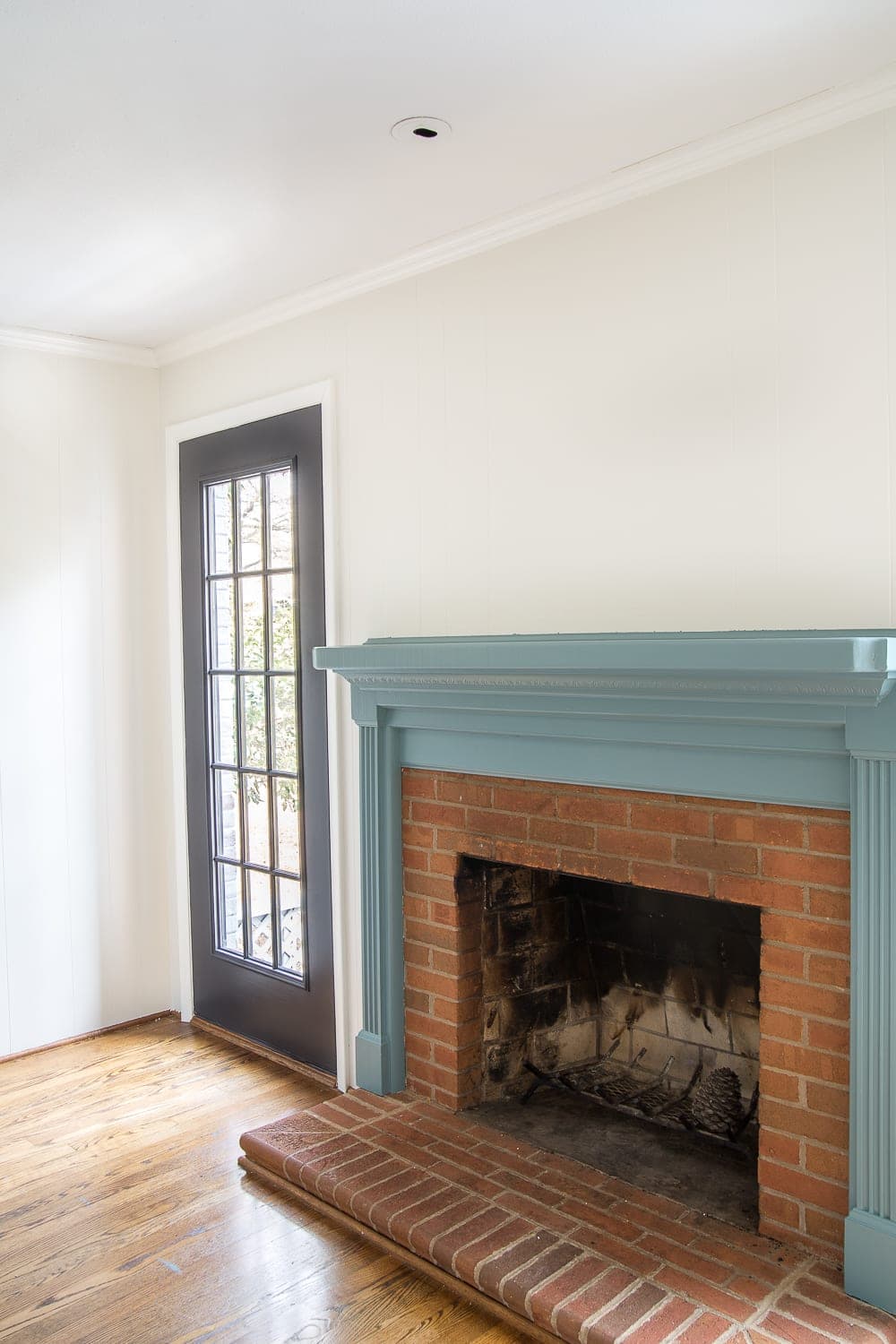 I’ll be sharing a few sneak peeks of some of our progress on my Instagram Stories in the meantime too.

Are you going on a painting frenzy in your house right now since so many of us are locked inside from the frigid cold. If the Carolinas actually get snow, I’m libel to have the entire playroom finished before it melts (which in Southerner speak means about 30 seconds). 😉

If you want to save this little tip for later, you can pin it here: 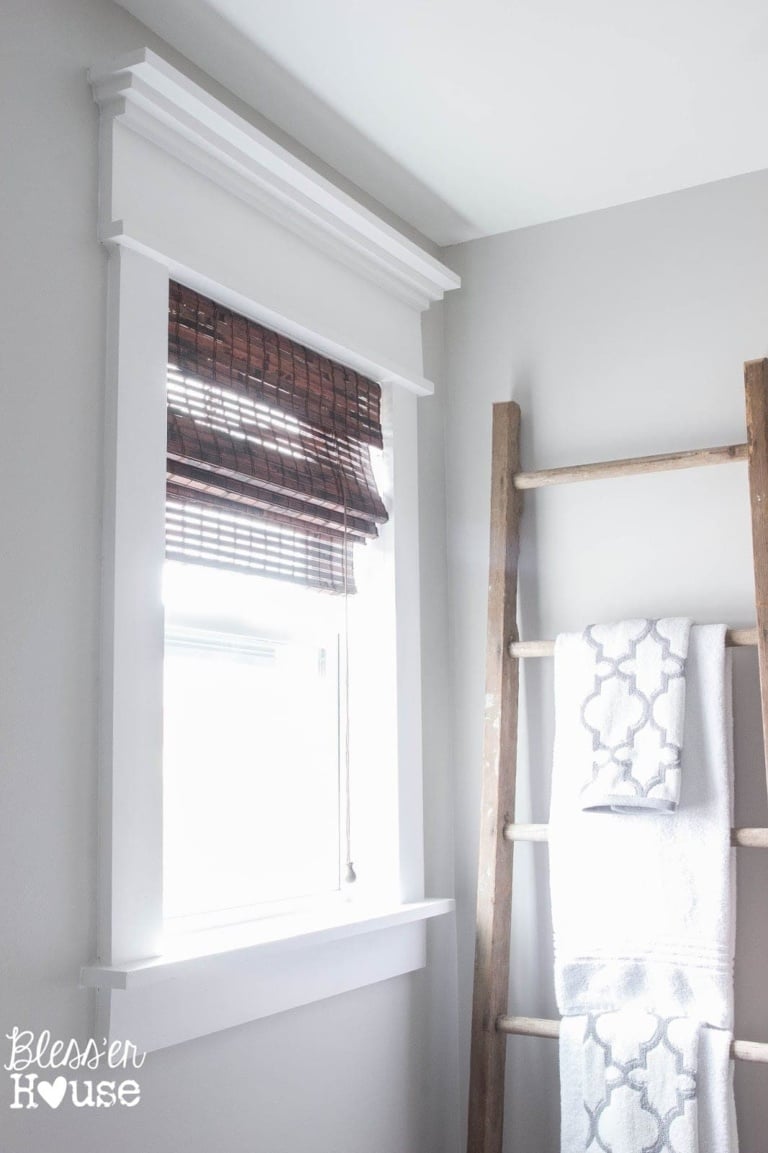 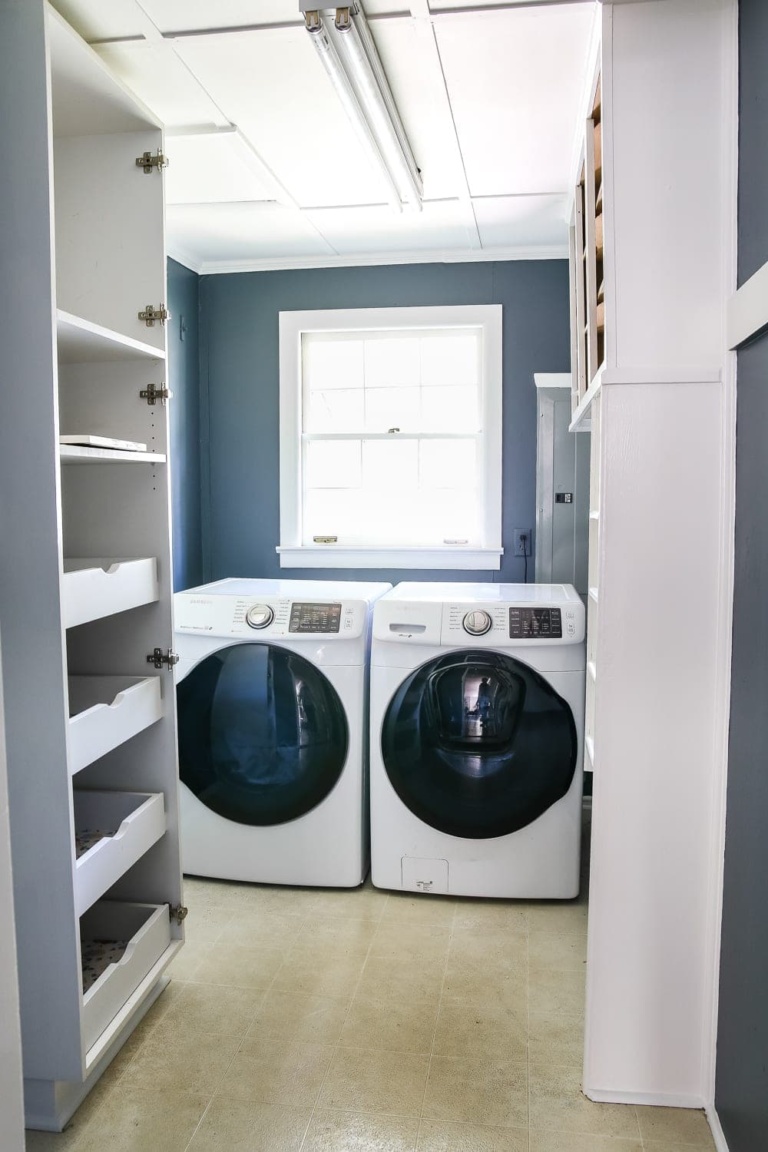 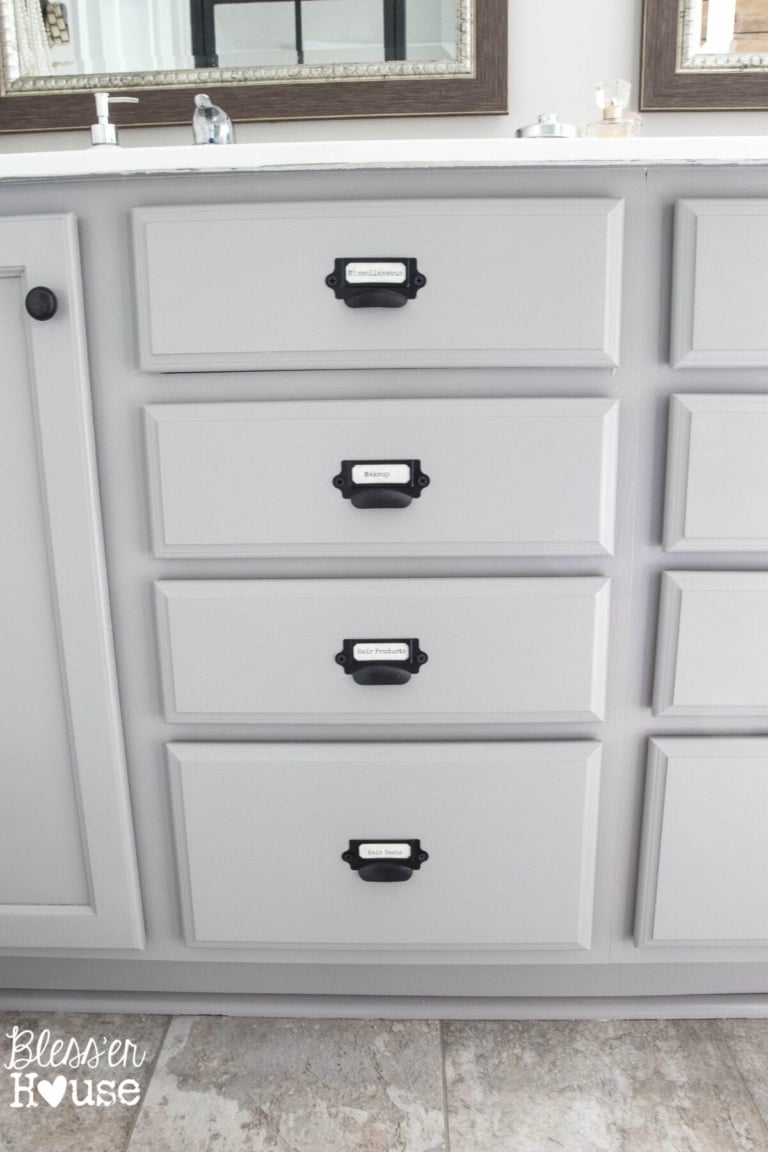 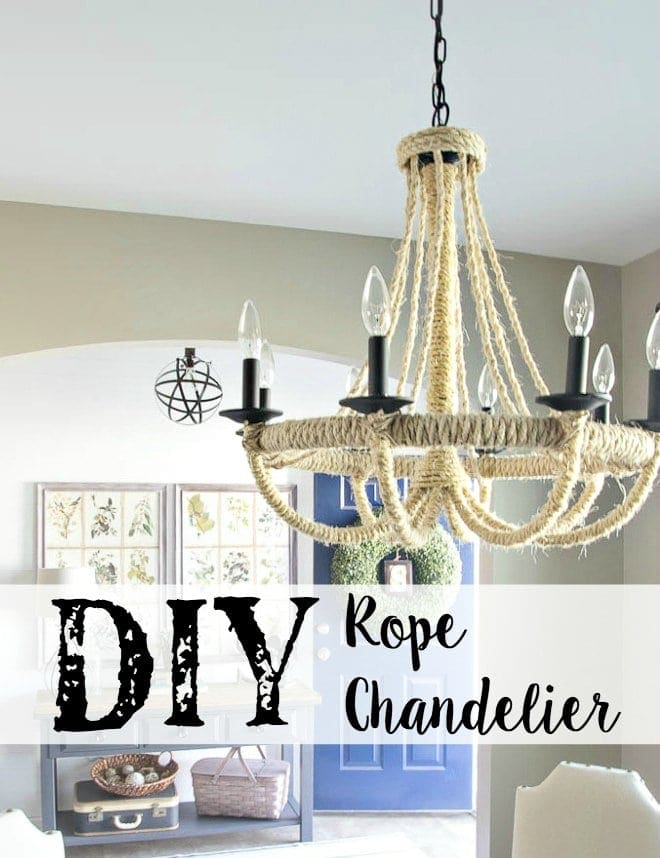 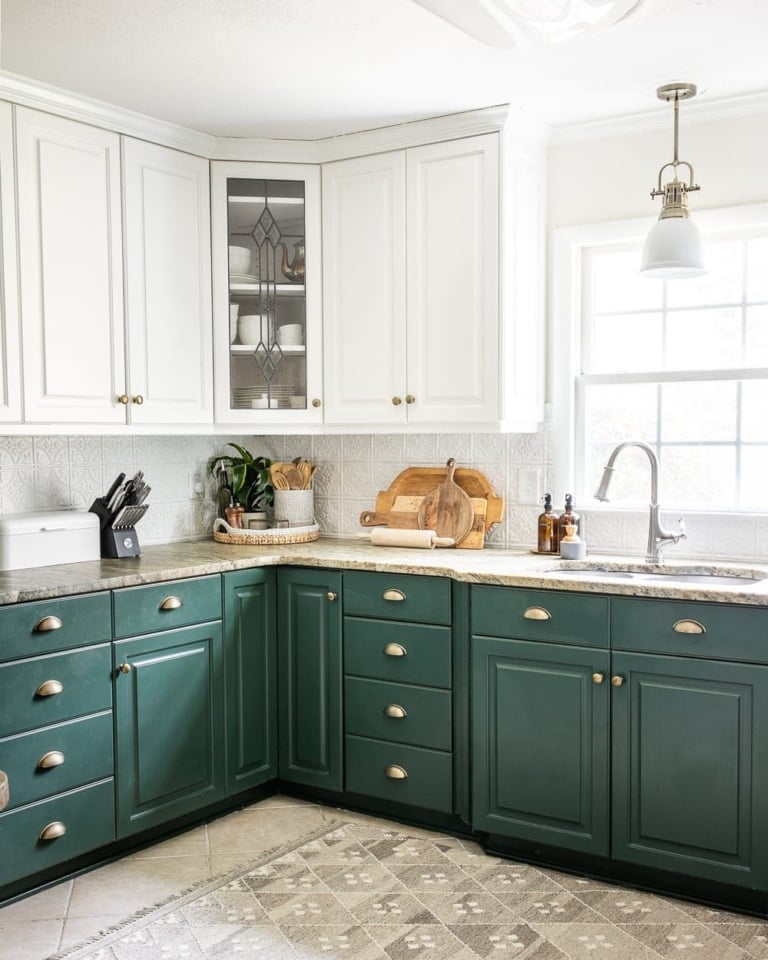 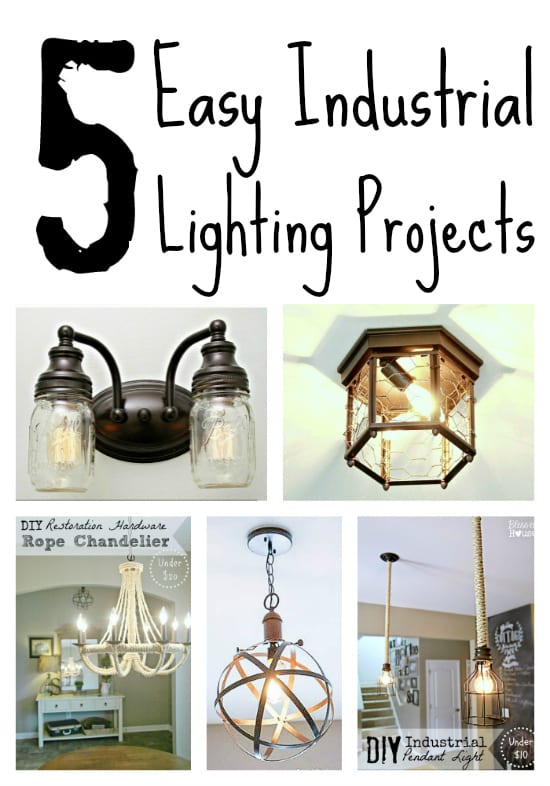