A step-by-step tutorial for hanging picture frame molding wainscoting and a shortcut to make it easier.

Watch out, y’all! The nursery makeover has officially started and it’s getting reeeaaal!

I mentioned in the last tour-through-my-brain-about-this-makeover that I kept envisioning lots of white picture frame molding on the walls (or wainscotting… potato/potahto).

This was the nursery a few weeks ago. 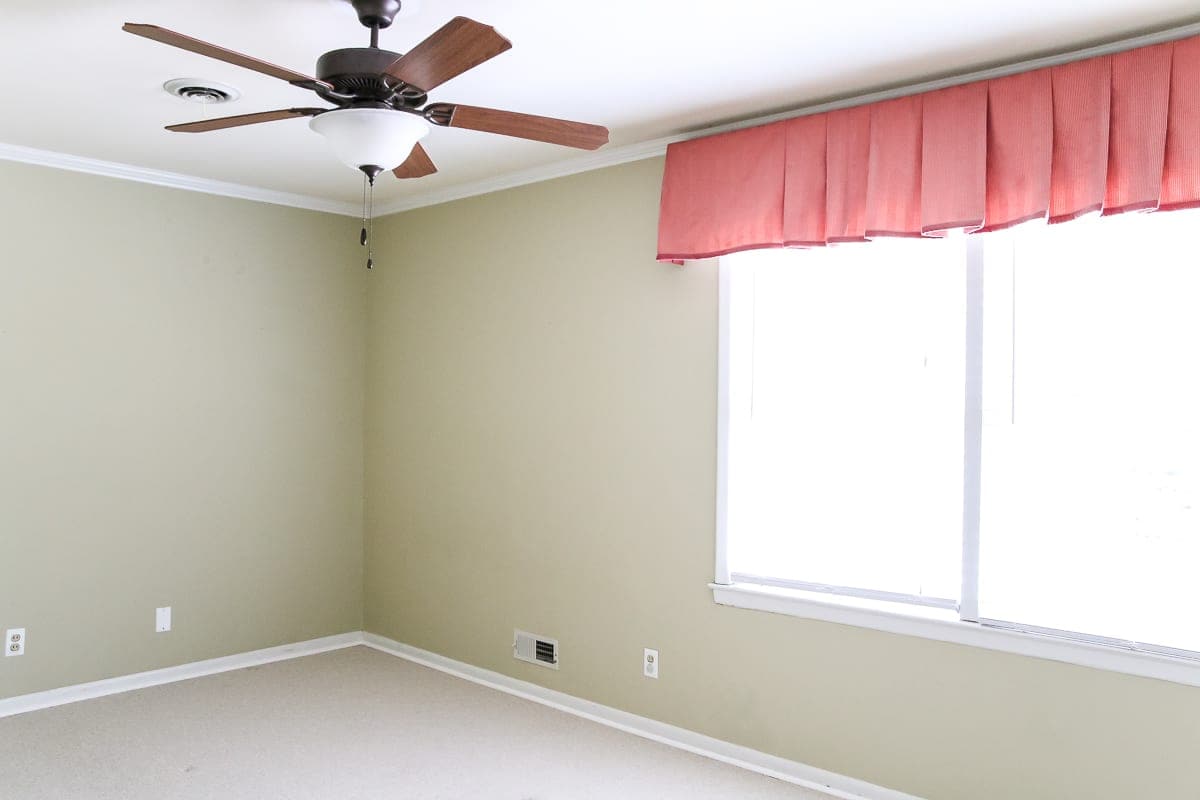 Not gonna lie… I was really intimidated by this one. (Mainly because this former English teacher does not do math, and molding requires quite a bit of it.)

But Robert and I knocked out this one in two days, and it was not nearly as complicated as I thought it would be. Woot!

1. We measured all of the widths of our walls first.

2. Then, to hang the chair rail, we marked 36″ from the floor onto the wall to set the height of where we wanted our chair rail to be. 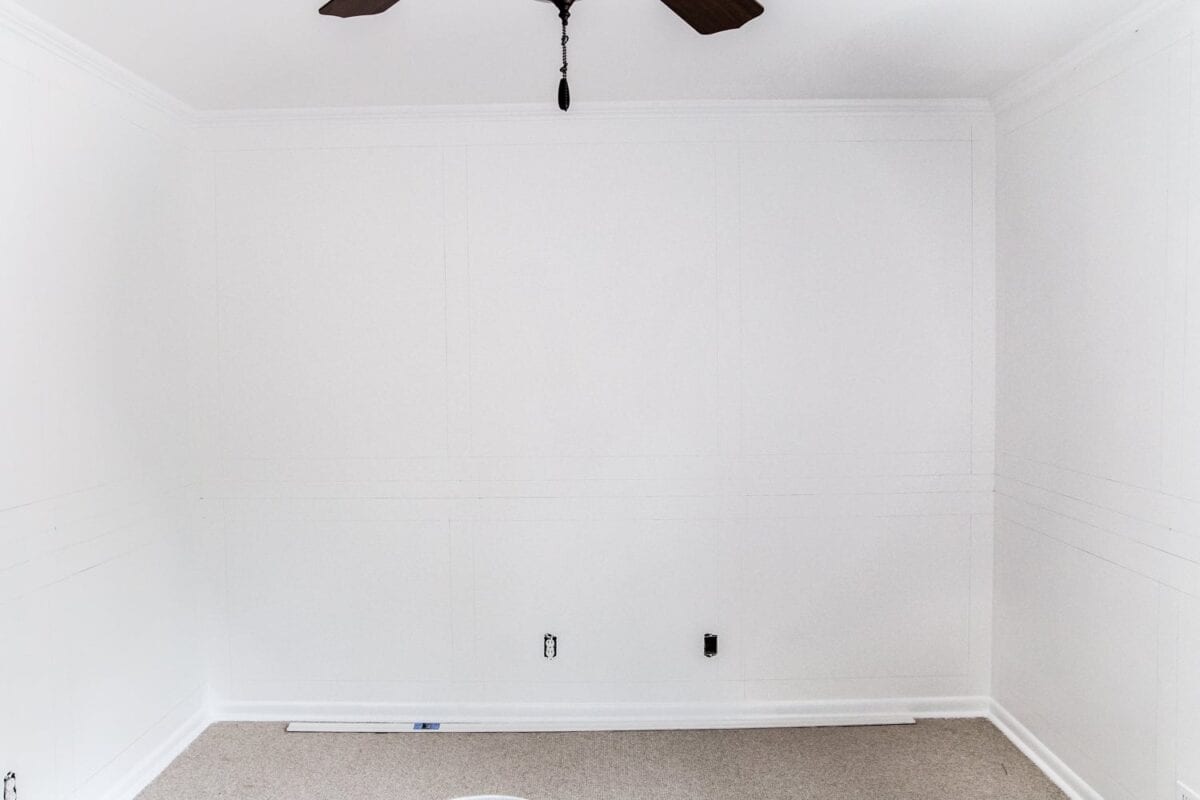 3. Using a level, we marked a horizontal line all the way around the room at the 36″ height. 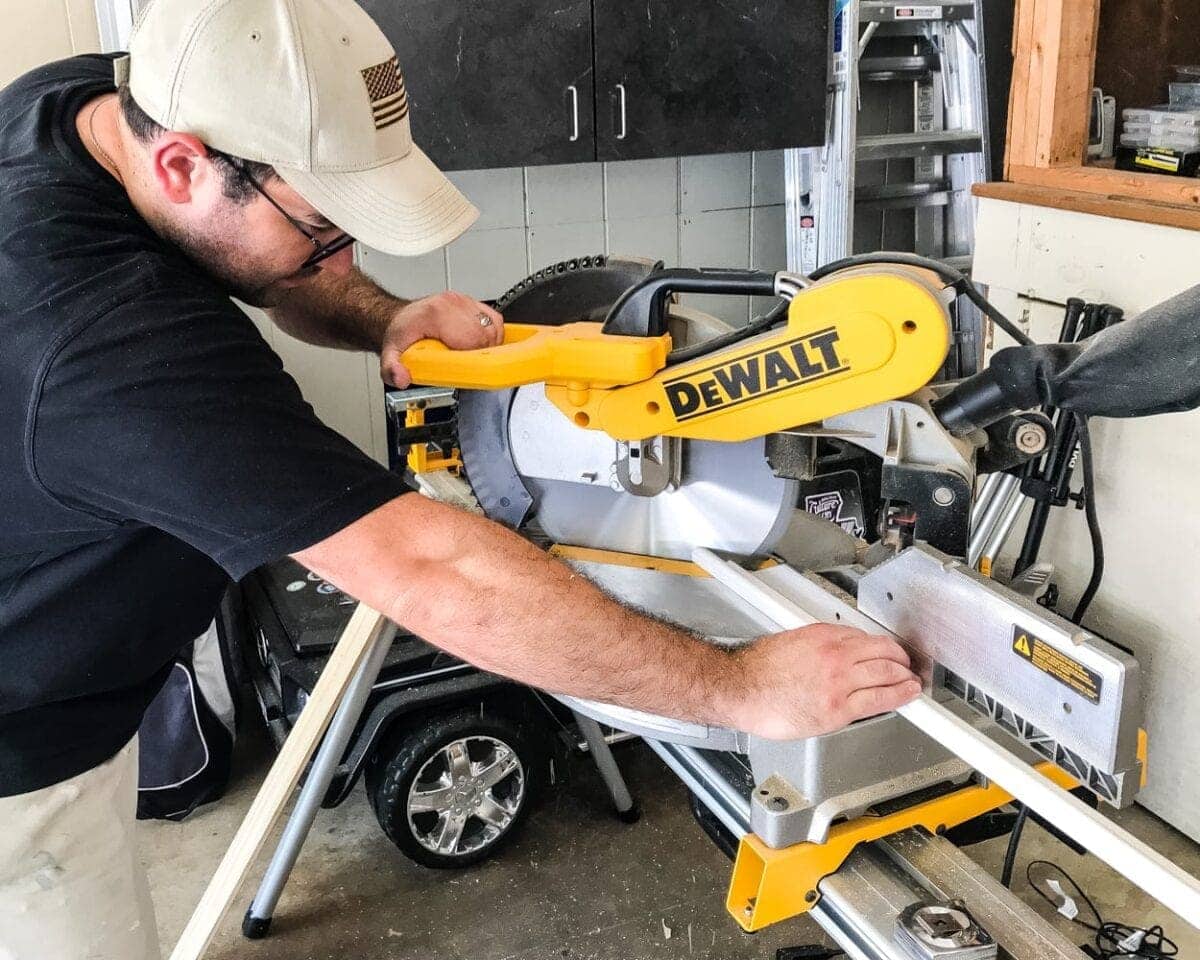 4. Then, using the miter saw, Robert cut his first chair rail piece at a straight cut to the width of our first wall.

5. We applied Loctite adhesive to the back of the cut chair rail piece, positioned it onto the straight line we had previously marked with the level on the wall, and pressed the chair rail into place.

6. Using the pneumatic brad nailer, we nailed the chair rail piece to the wall. 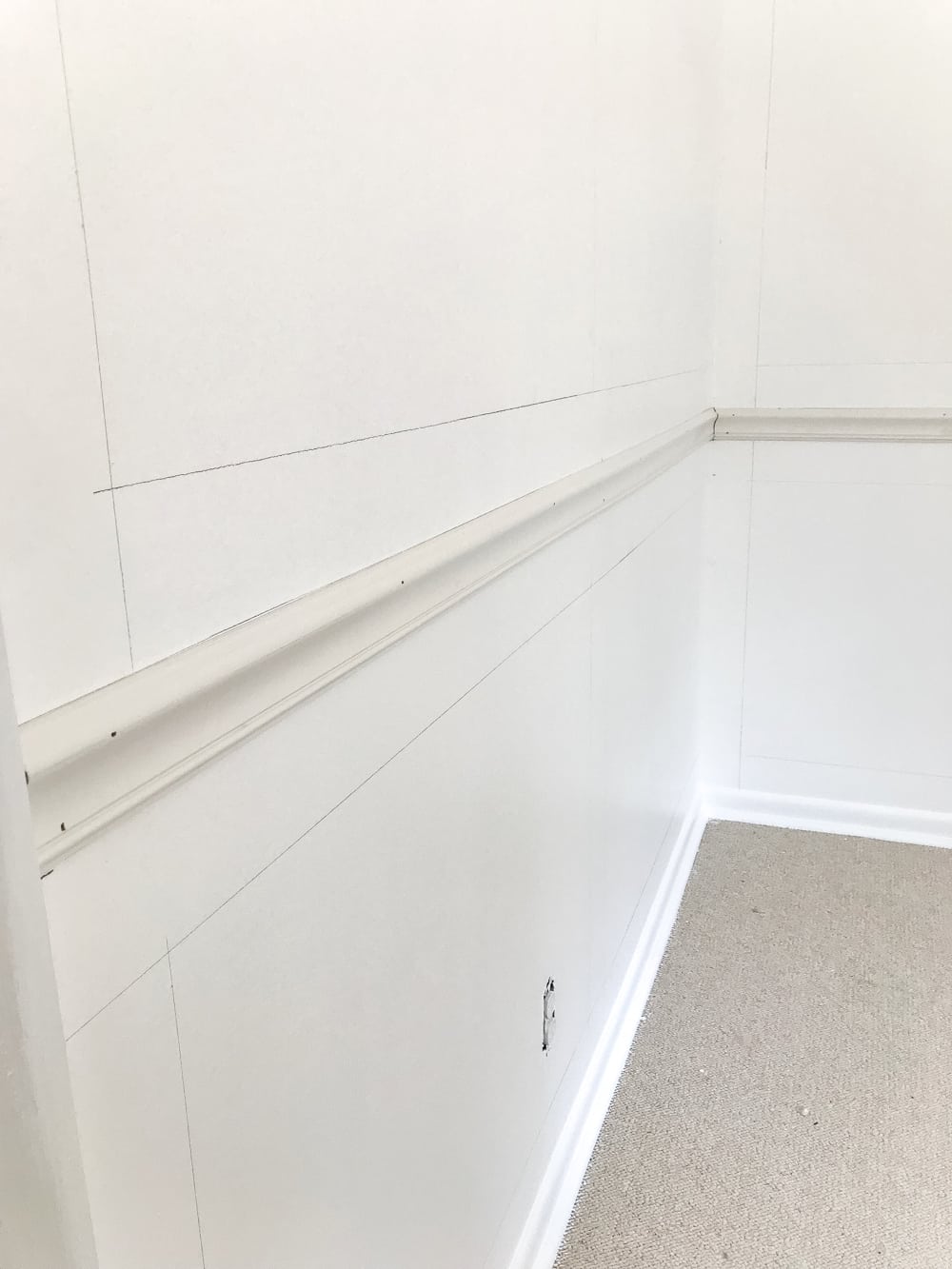 8. Then, using a coping saw, he carved out the profile of the 45 degree cut on the chair rail to make it fit snug to the design on the already hung chair rail piece. 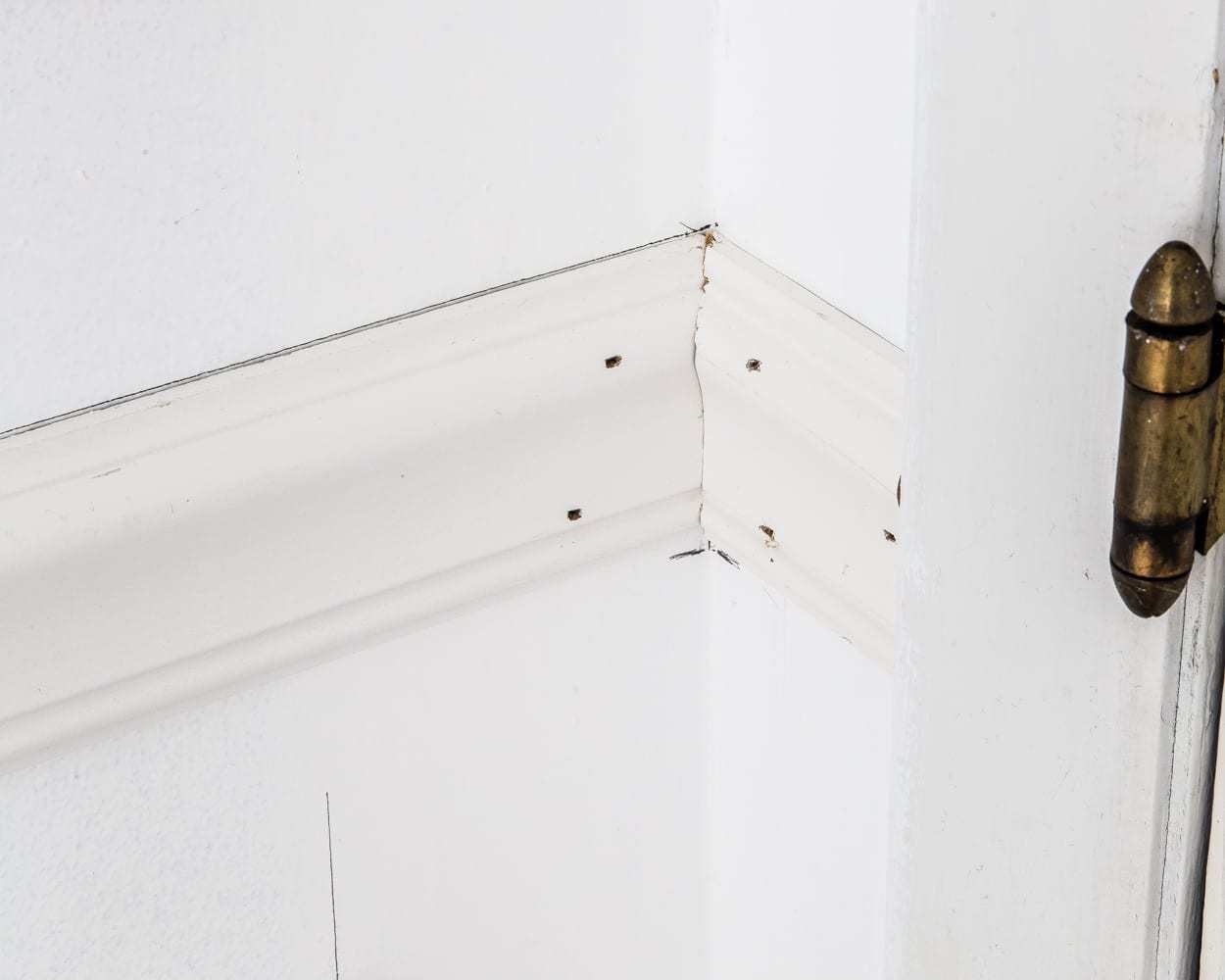 9. He continued that process of measuring, cutting at a 45 degree, coping, applying Loctite, and nailing the chair rail all the way around the room.

10. To add the picture frame molding, we decided how many frames we wanted to place on each wall based on the measurements.

None of the walls have to have frames that are all the perfectly exact width all the way around the room, but you do want them to be the same width per each individual wall.

To figure out the math, use this formula: 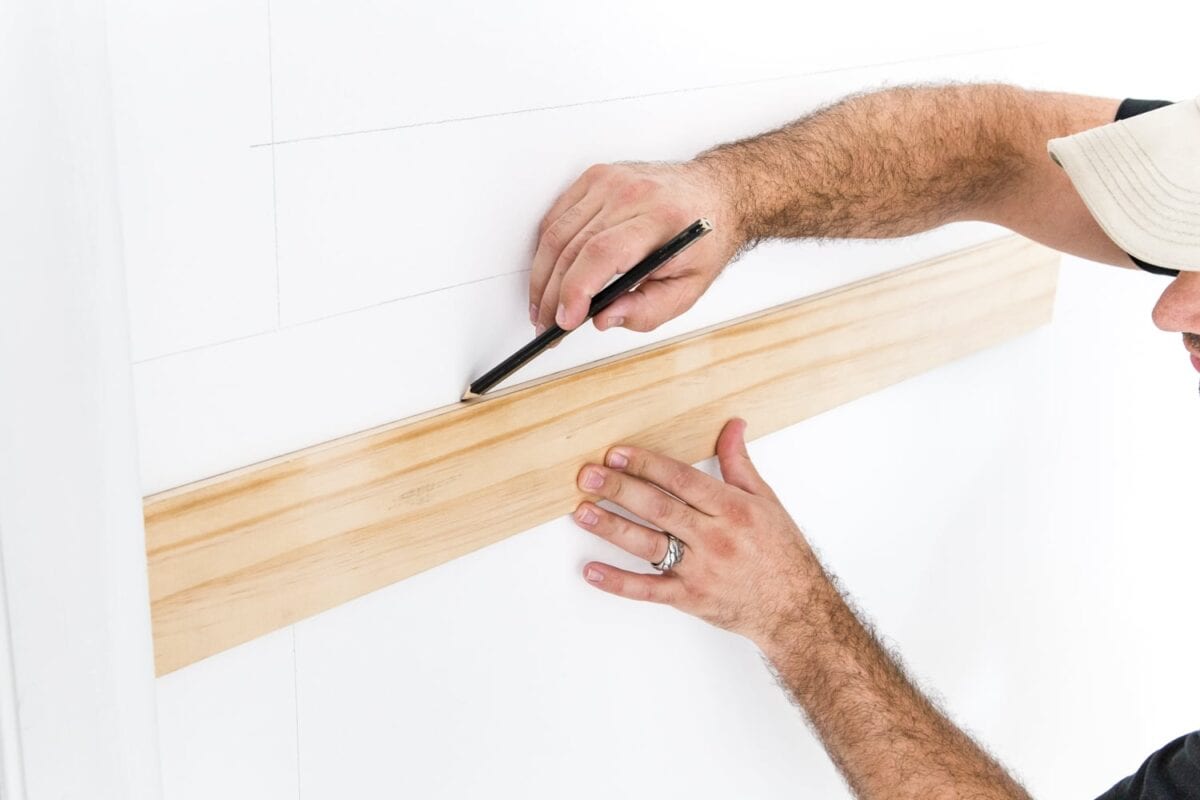 11. Using the 3/8″x4″ board, we pressed it against the top and bottom of the chair rail, baseboard, and crown molding and against all of the corners in the room to mark the spaces with a pencil. 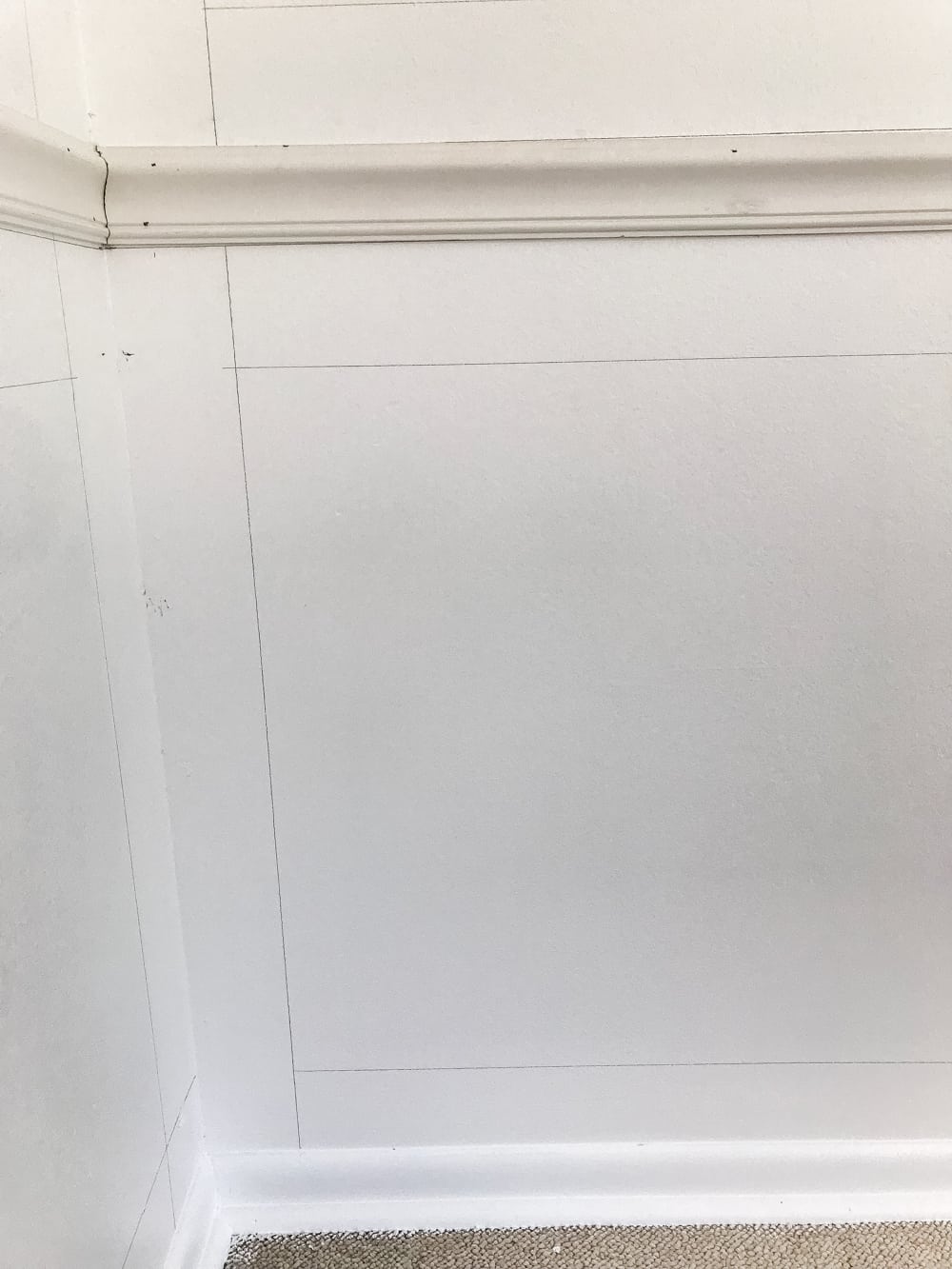 12. To mark the spaces between where the frames would go, we divided the wall’s measurements by the number of frames.

123″ wall divided by 3 frames would be 41″. We penciled a tick mark at 41″ and 82″ to find the spaces between the frames. We placed the middle of the spacer at those tick marks and drew lines with a level to mark the spaces for all 3 individual frames.

13. Once all of the walls were marked with our frames’ outlines, we started measuring each horizontal line for the tops and bottoms of the frames. 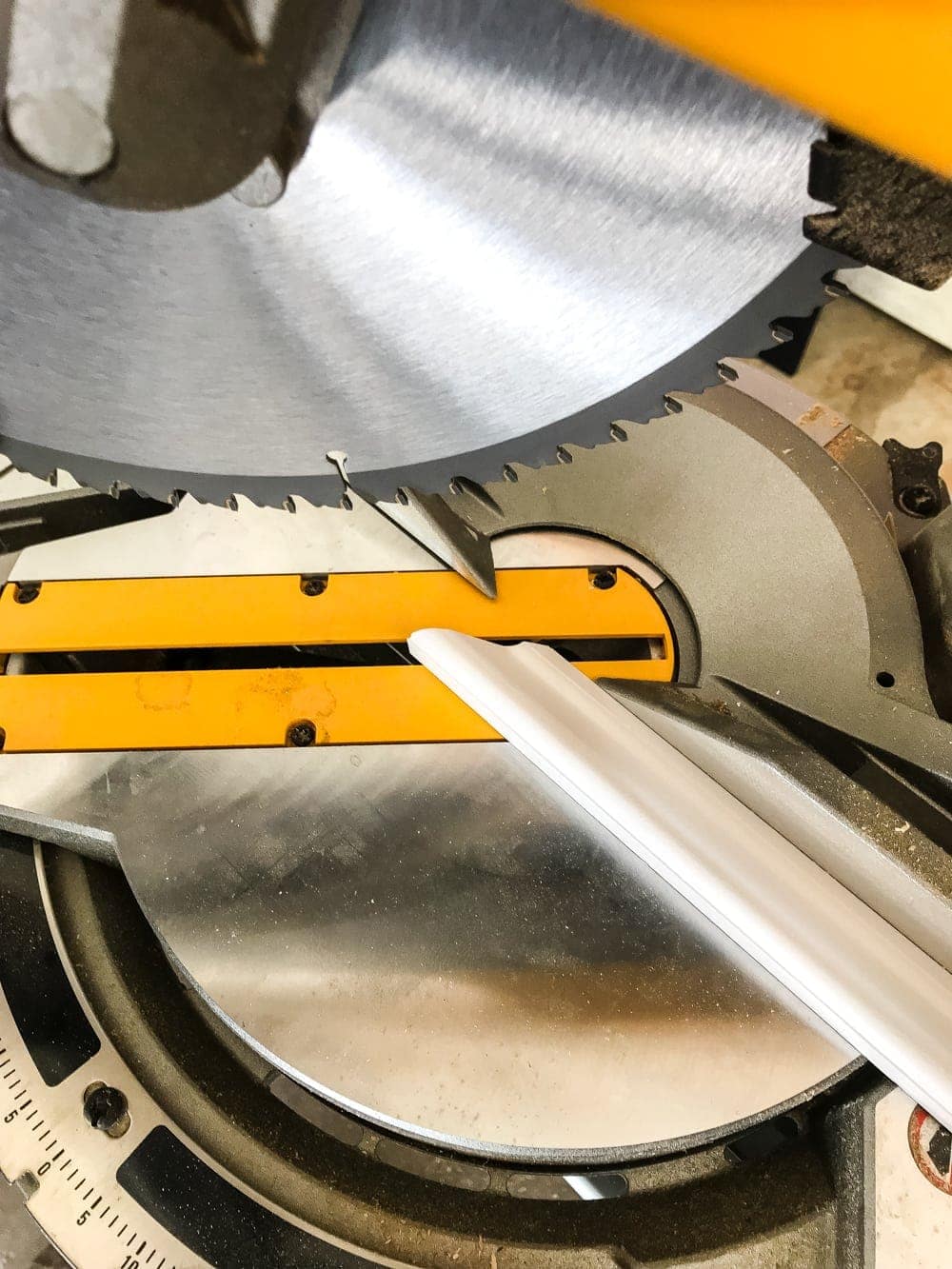 14. Then, we cut each piece of finger-jointed molding to the measurements of our frames at a 45 degree angle on the miter saw. We worked in batches by cutting the top and bottom lengths of the frames first. 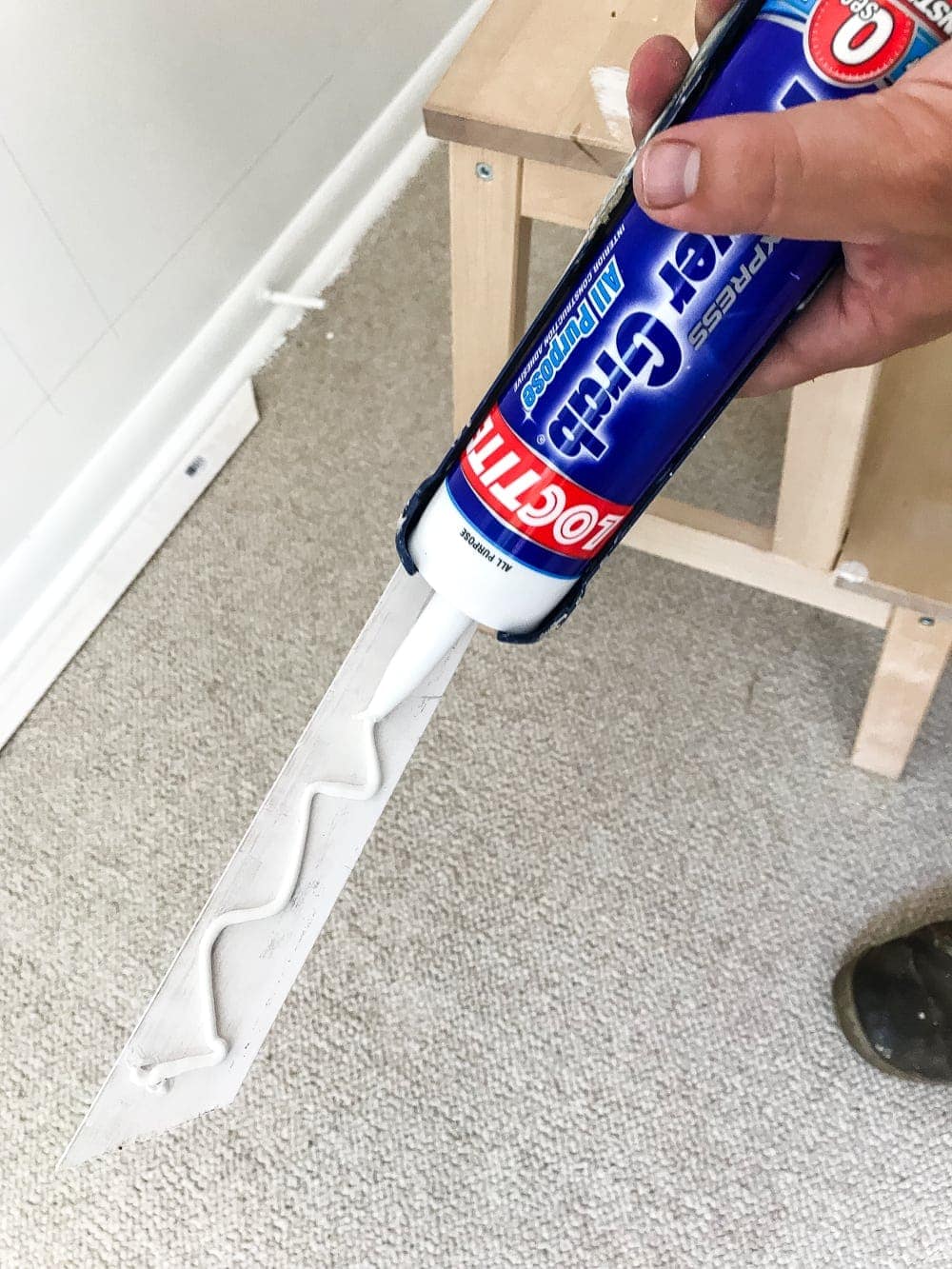 15. To attach the finger-jointed molding to the walls, we applied Loctite adhesive, positioned it along the penciled line, and attached with the pneumatic brad nailer. 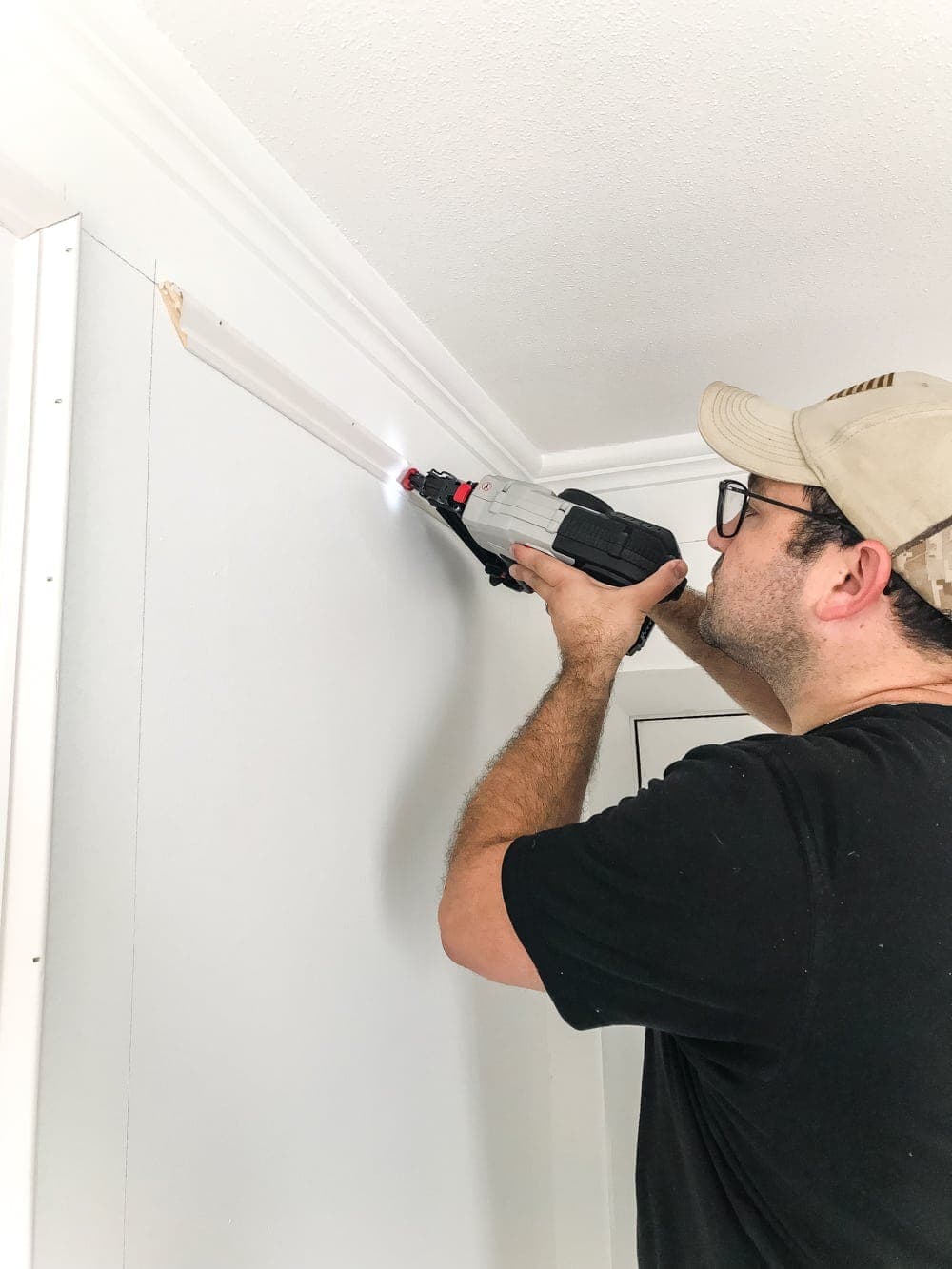 16. Once we had the horizontal pieces attached to the wall, we measured the vertical side pieces, cut them at 45 degrees on the miter saw, and repeated the process of Loctite and brad nailing. 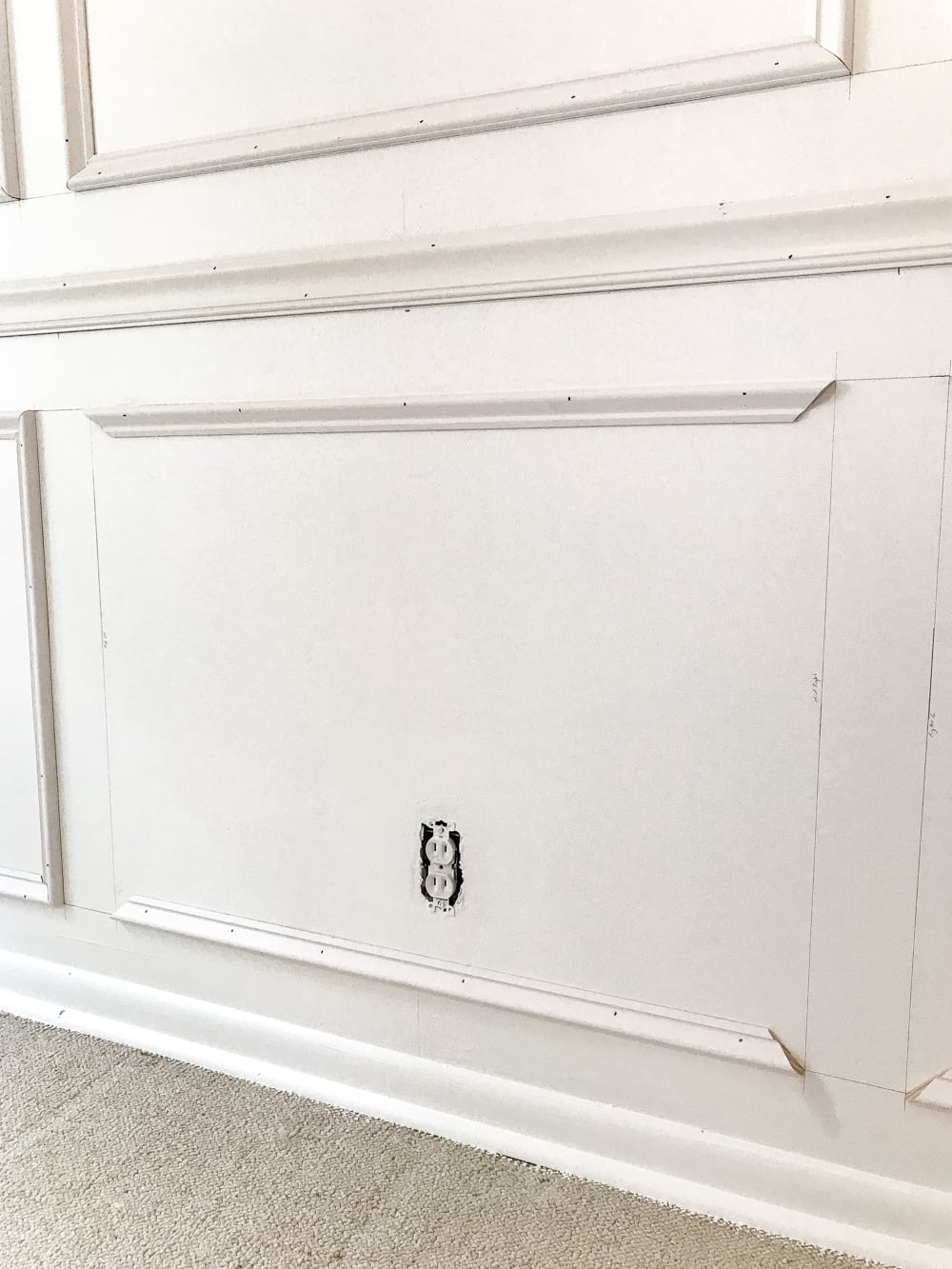 The whole process was a lot of measuring and cutting, but at least using a spacer helped cut down on a big chunk of the work. 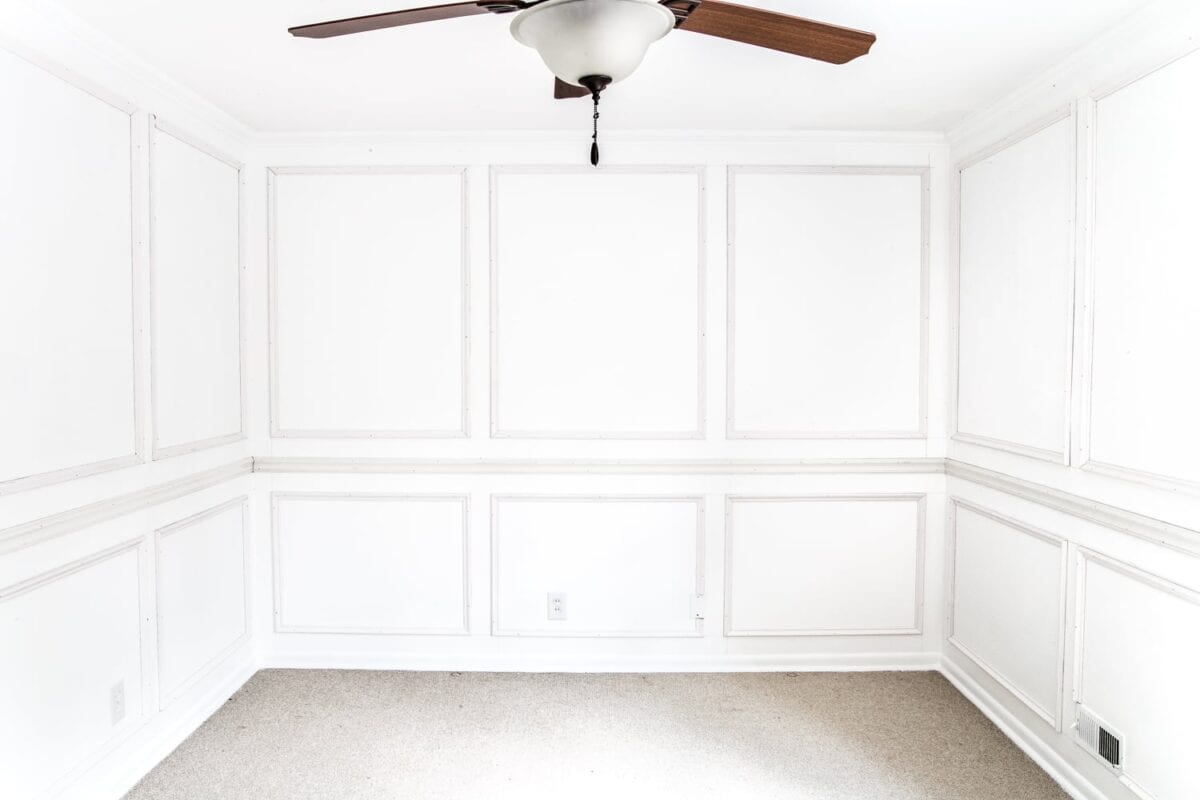 It was tedious but worth every single second! Ahhh so gorgeous! 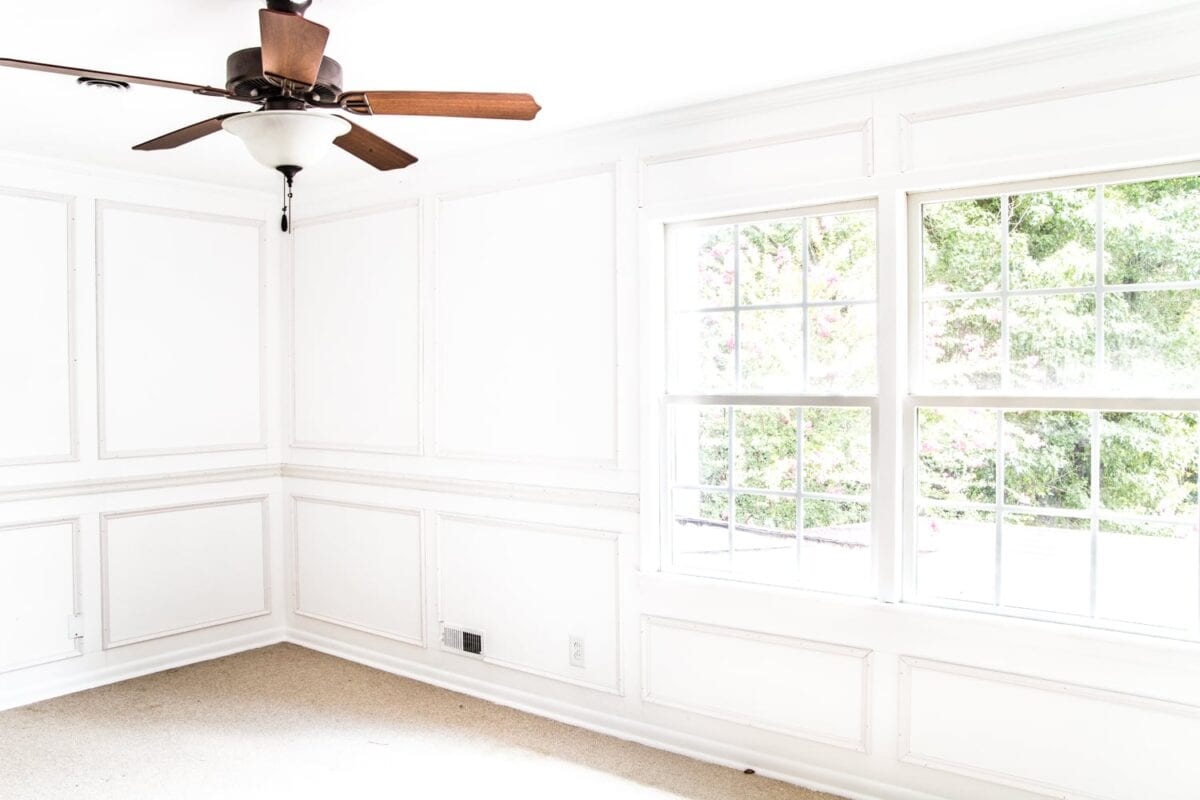 Here’s the dramatic before along with where we are now: 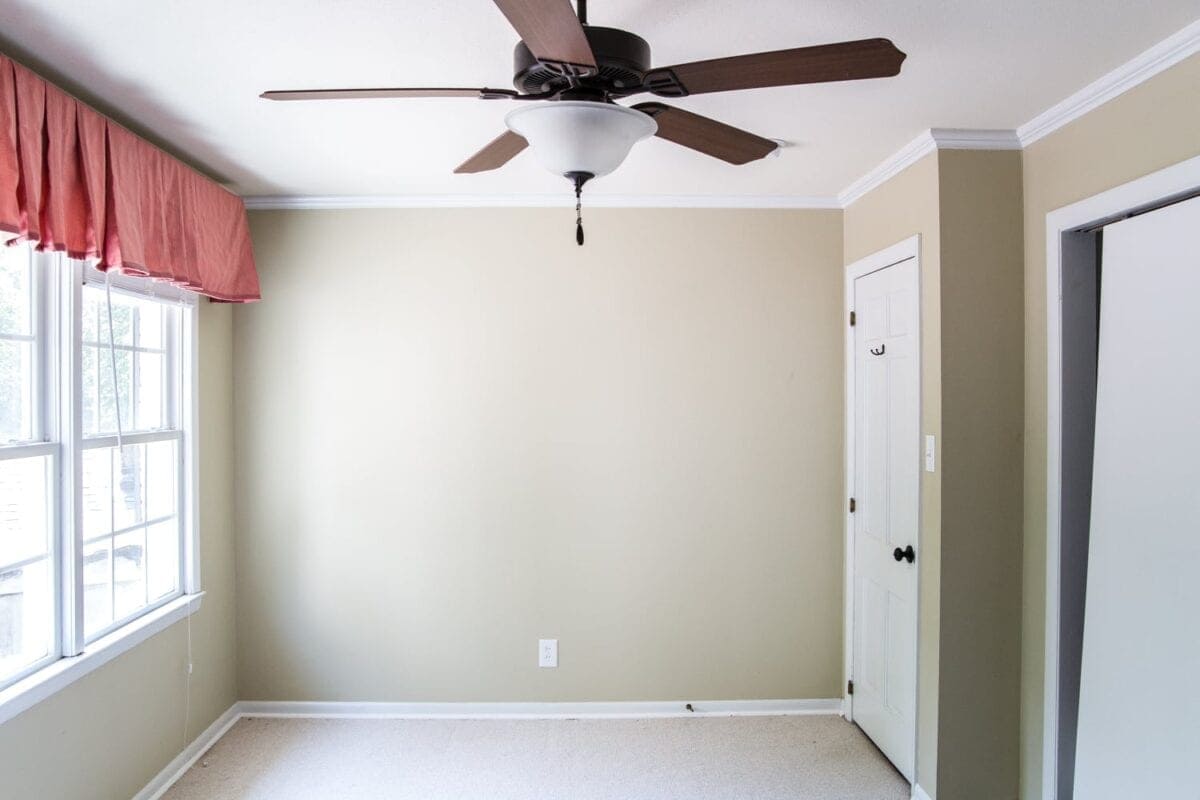 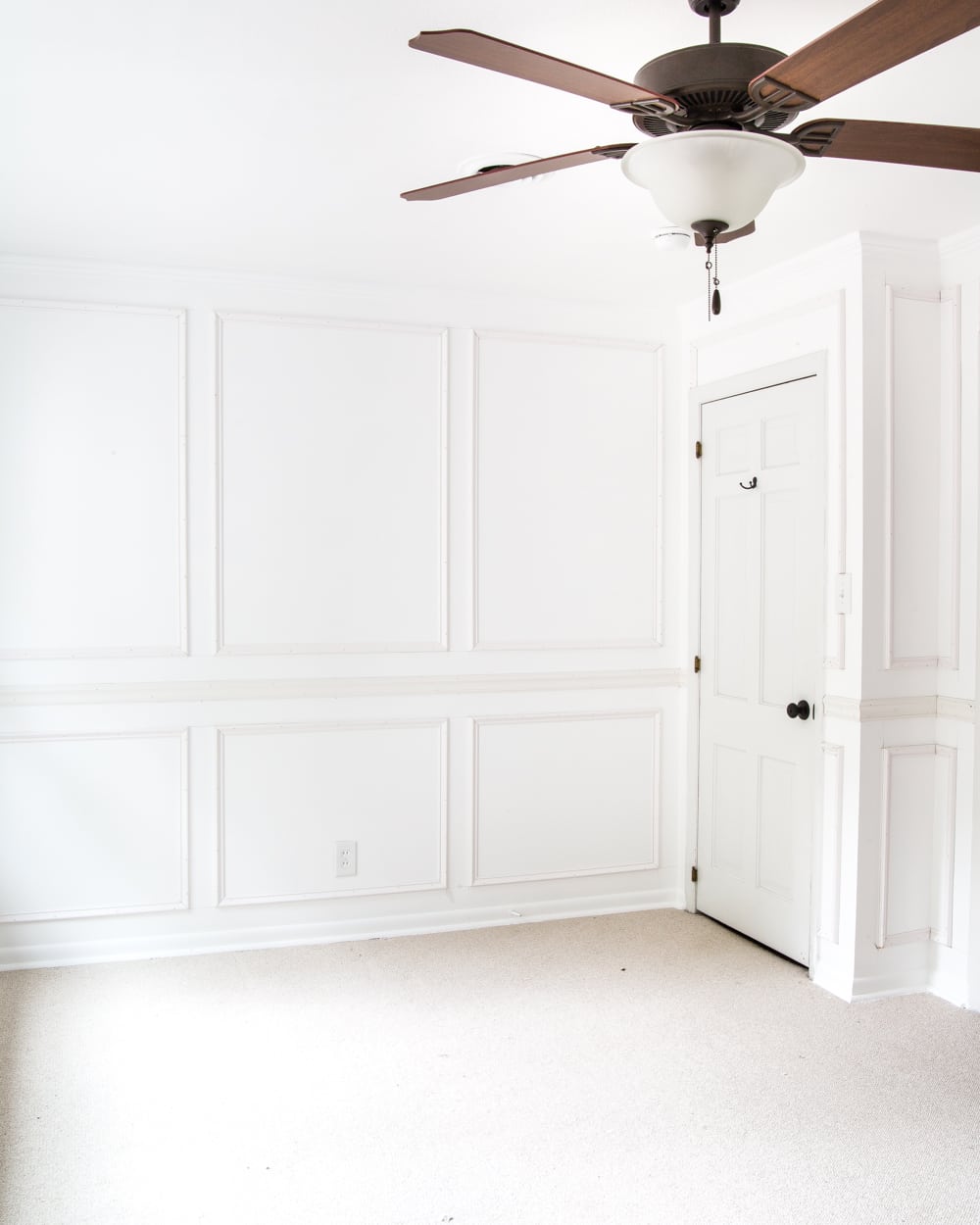 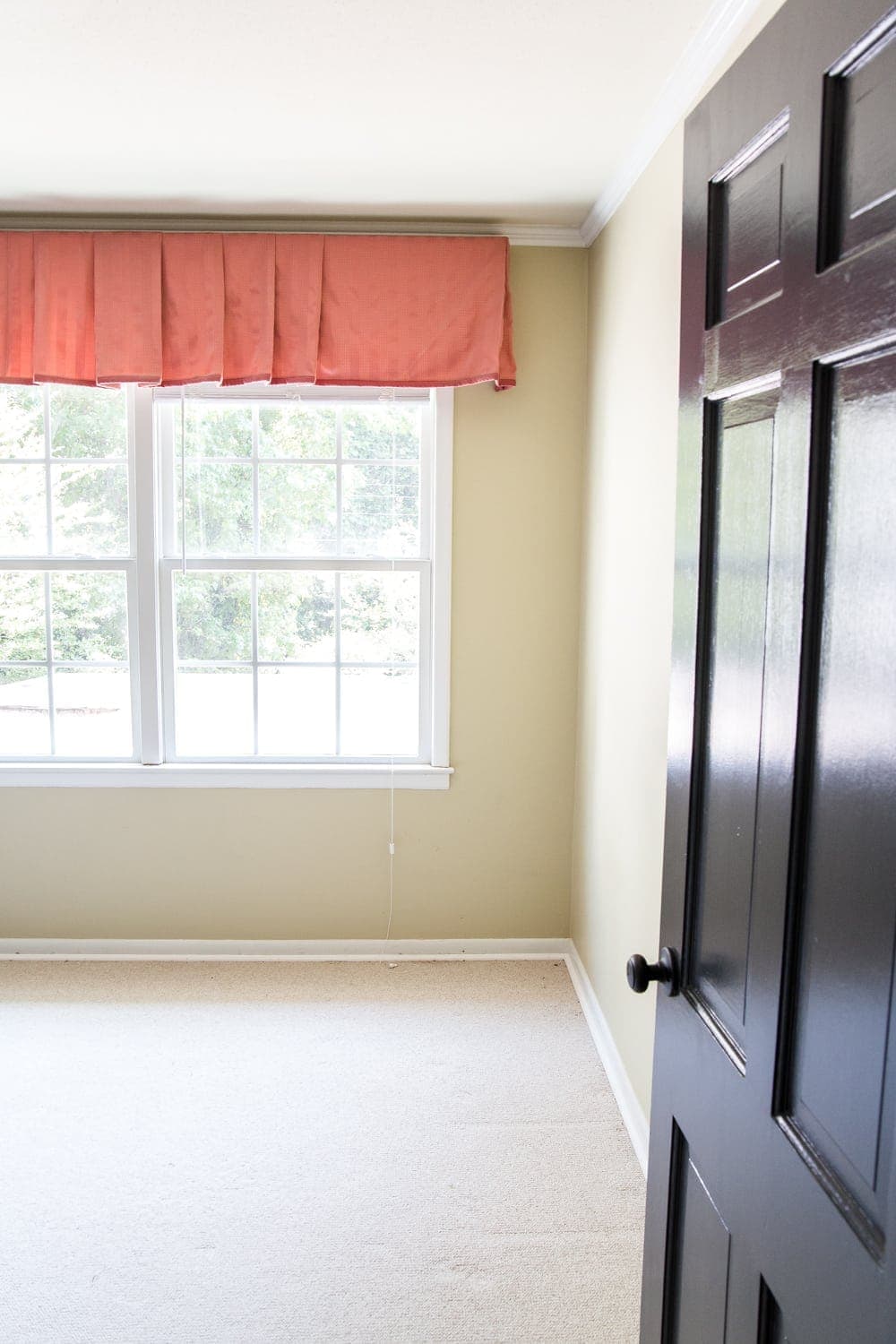 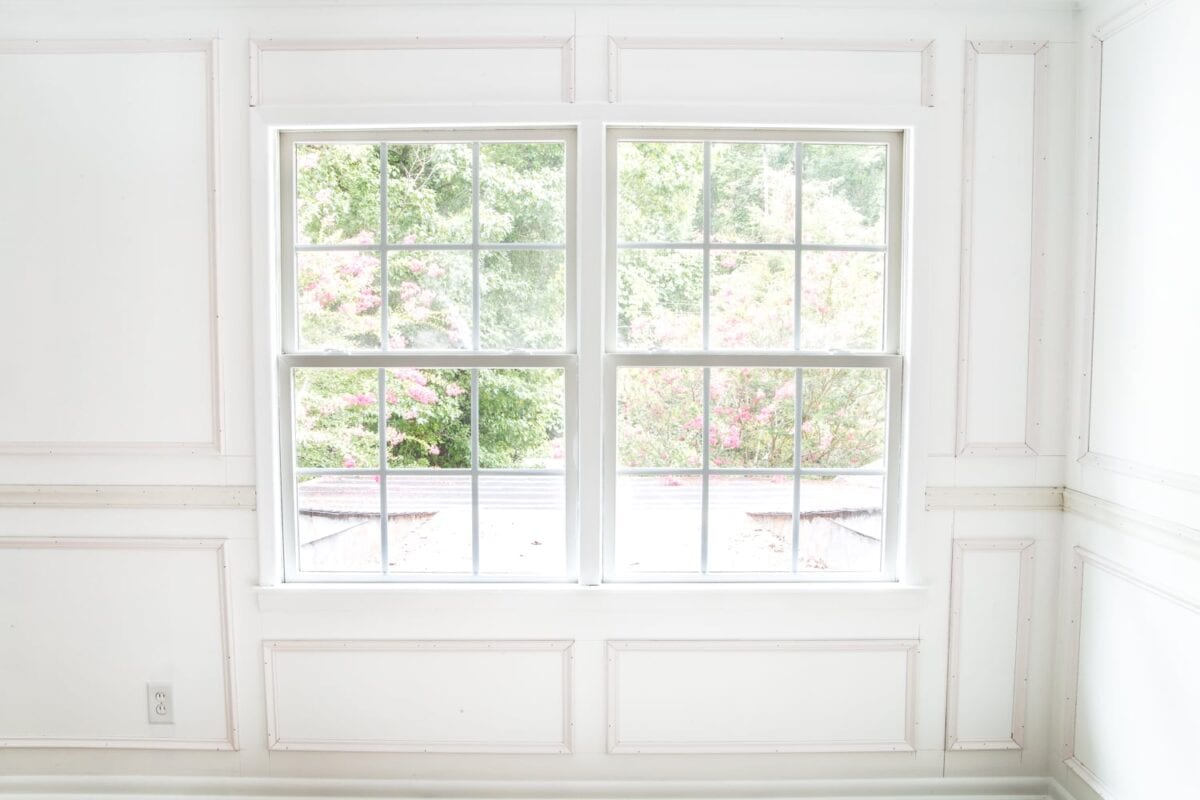 Now that the entire room’s picture frame molding is up, next on the list is to caulk and paint.

Then we’ll be ripping out the old carpet to refinish the existing hardwood floors underneath and replacing the ceiling fan with something more on the feminine side.

If y’all need us, we’ll be caulking over here for the next century. 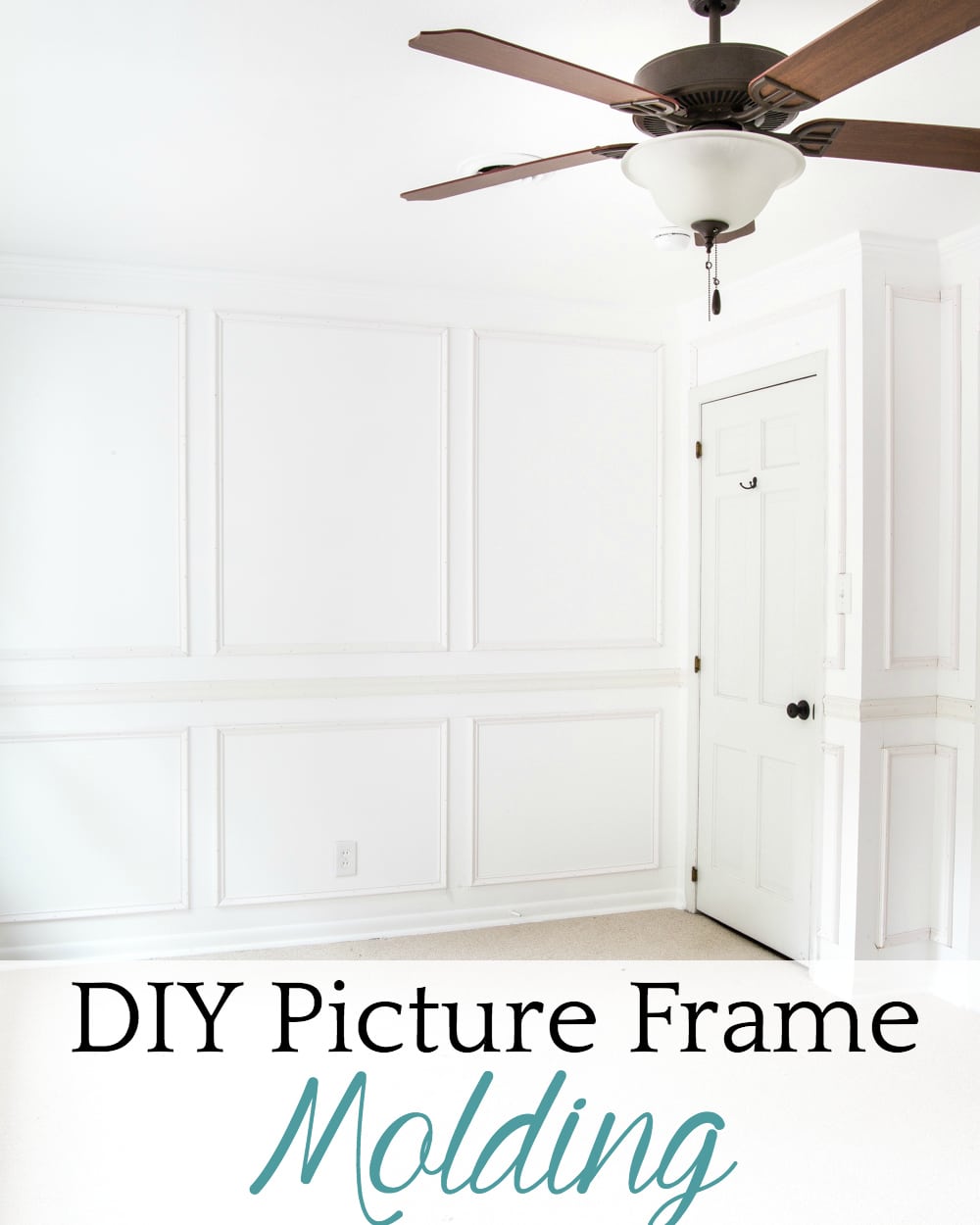 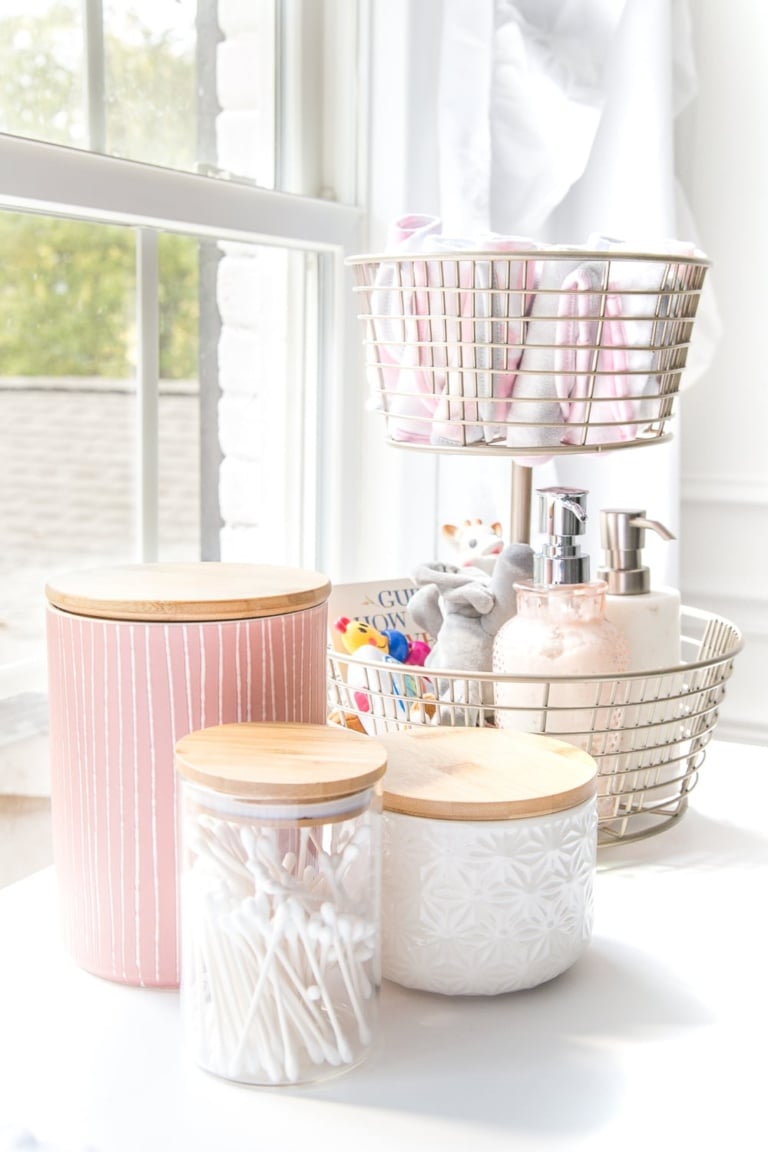 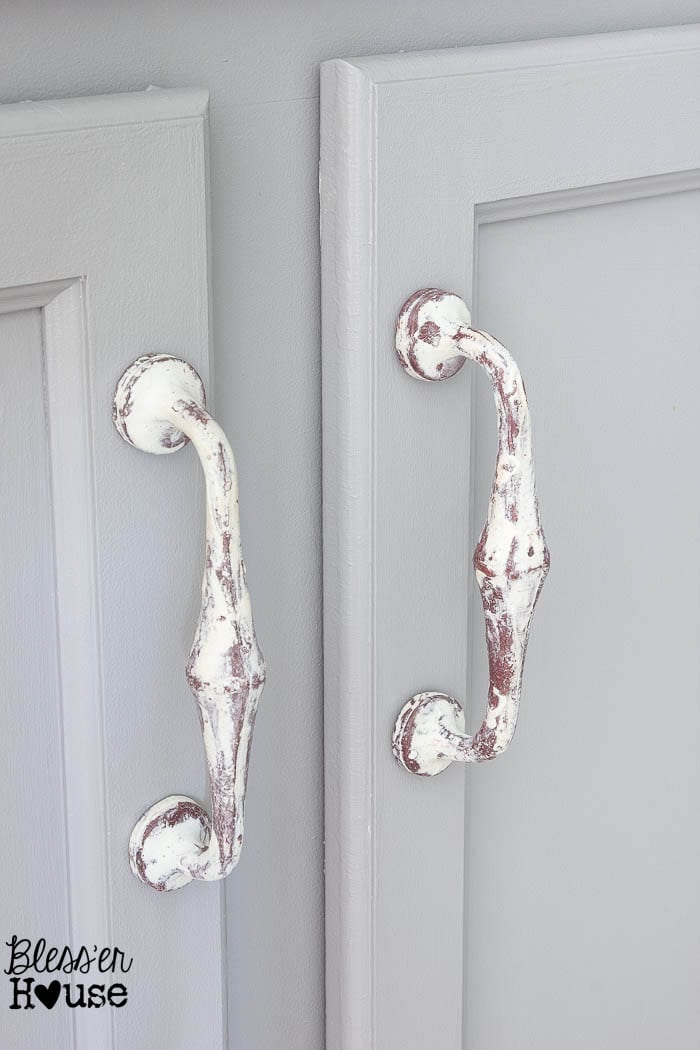 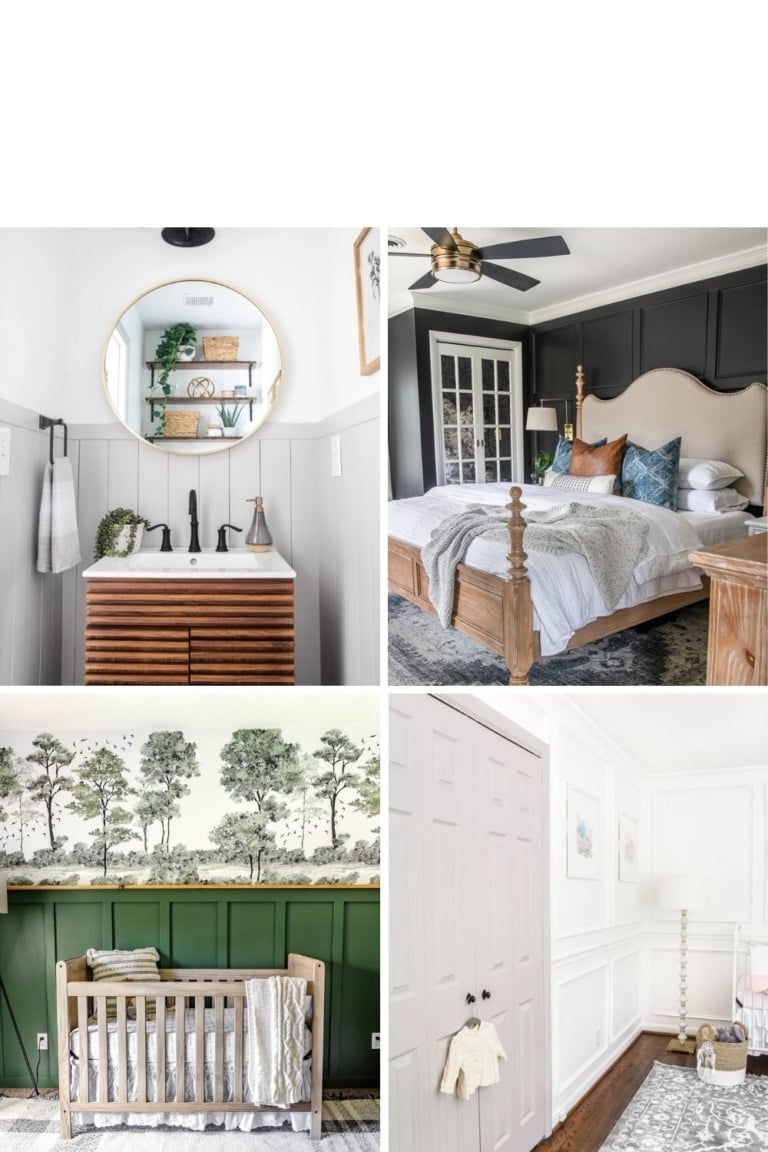 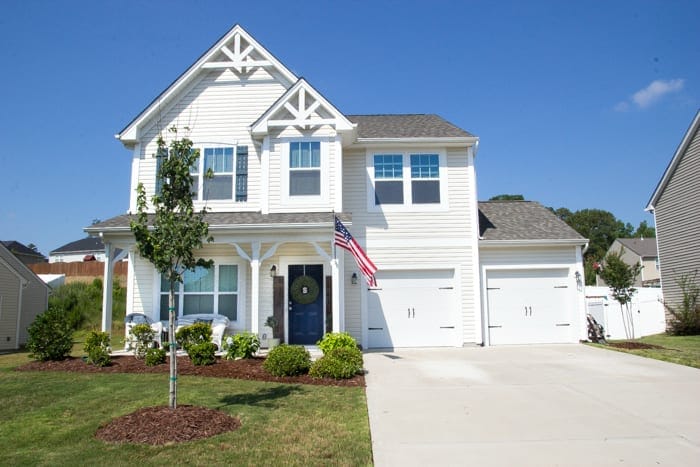 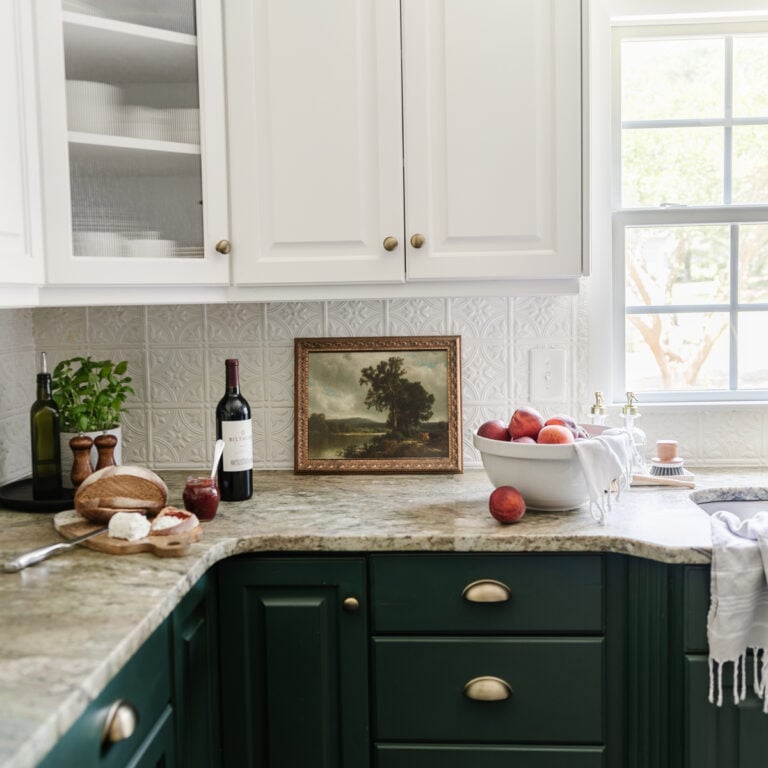 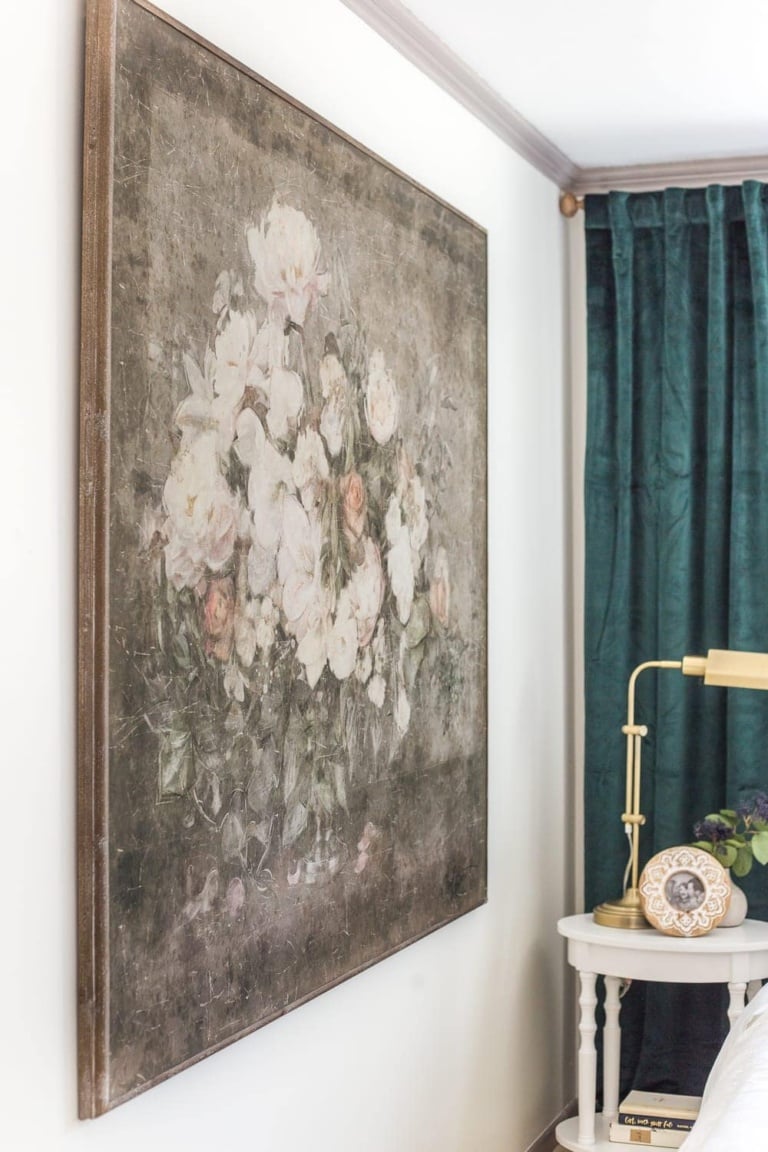